I know I said that Keiichiro’s route would be the last one I played in Bad Boys Do It Better, but then that last Voltage Sale happened and I wound up buying Yu’s main story. I still refuse to buy Akira’s route, I just can’t bring myself to spend money on it, even during a sale, but I couldn’t have been more pleased with Yu’s main story! 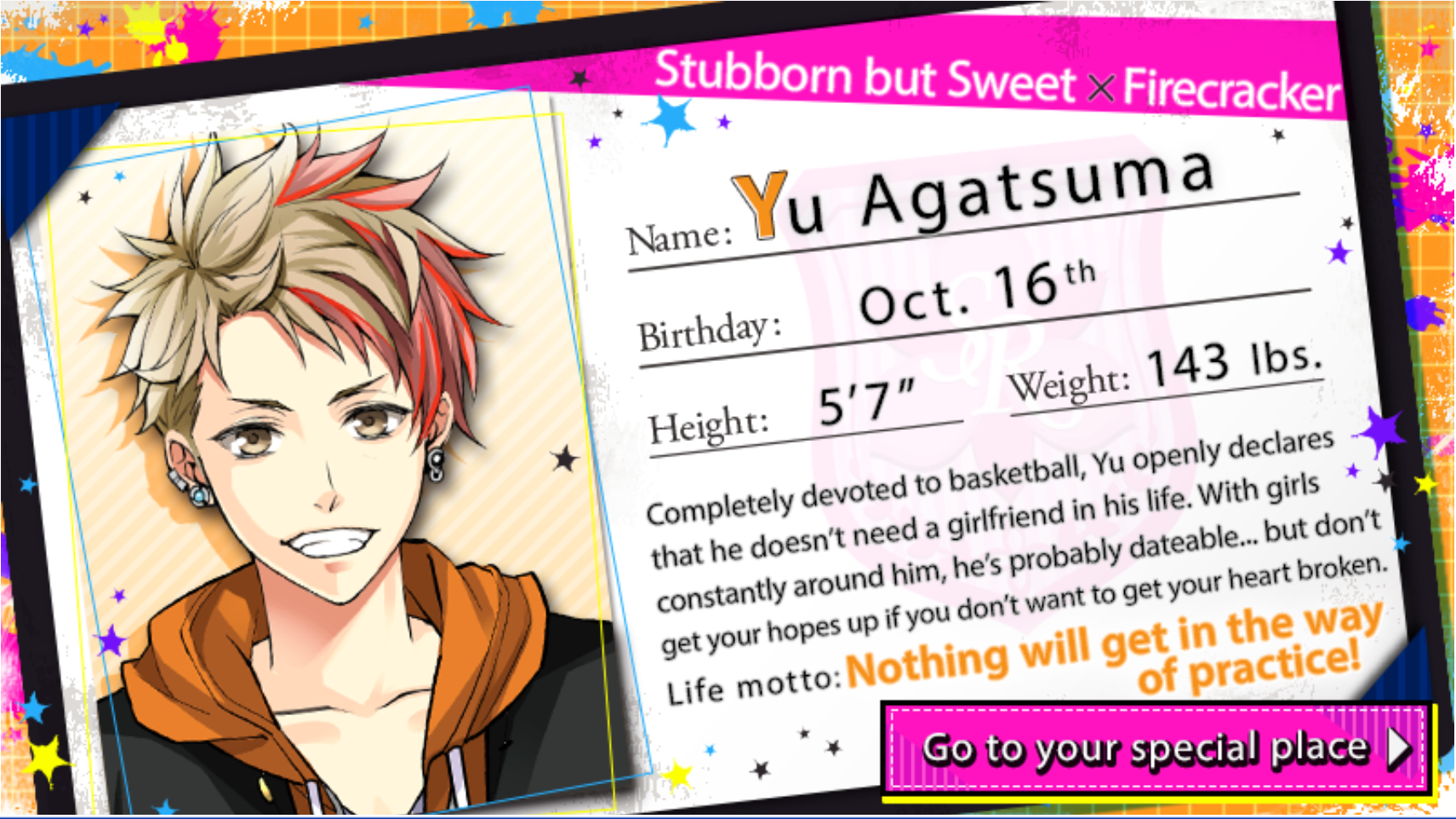 It didn’t take long for me to fall for Yu, he’s like a sweet puppy, you just want to hold him close and pat his head. Too bad he isn’t interested in romance… Is there room in this basketball idiot’s heart for both you and basketball or will your first love end in heartbreak?

**Disclaimer: I DO NOT own any of the images used in this review, ALL images, screenshots, and characters belong to Voltage Inc. Please if you are interested in the game, and purchase the stories when they are available in your area.**

A friend is a friend… 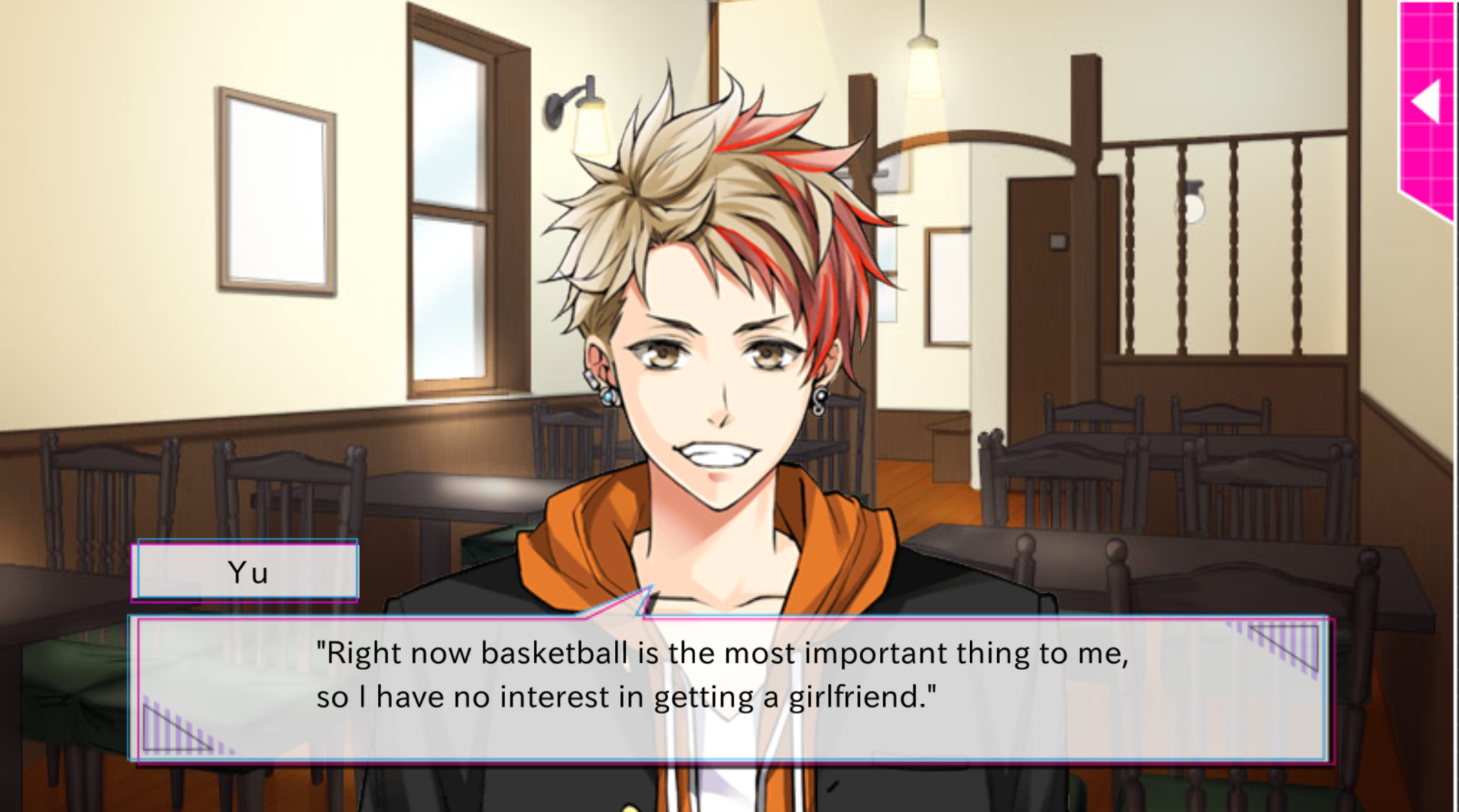 So when the power goes out at the dorm, Yu takes advantage of the situation, by planting a big wet one on the MC… at least that’s what he cheerfully announces to everyone the minute the lights come back on. Honestly, I think he was just fooling around, since the MC doesn’t really react like she was just kissed and the moment isn’t addressed at all in the main story. In fact, that was a bit of an out of character move for Yu, sure he can be playful and downright mischievous at times, but to randomly kiss a girl in the dark like that…nah. Besides, Yu openly states that he is not interested in romance at all, since he’s too preoccupied with basketball to have a girlfriend. Which would be fine, if Yu was a complete asshole, but he isn’t, he’s a giant lovable teddy bear, who is completely oblivious to how desirable he is… it’s hard not to like him! 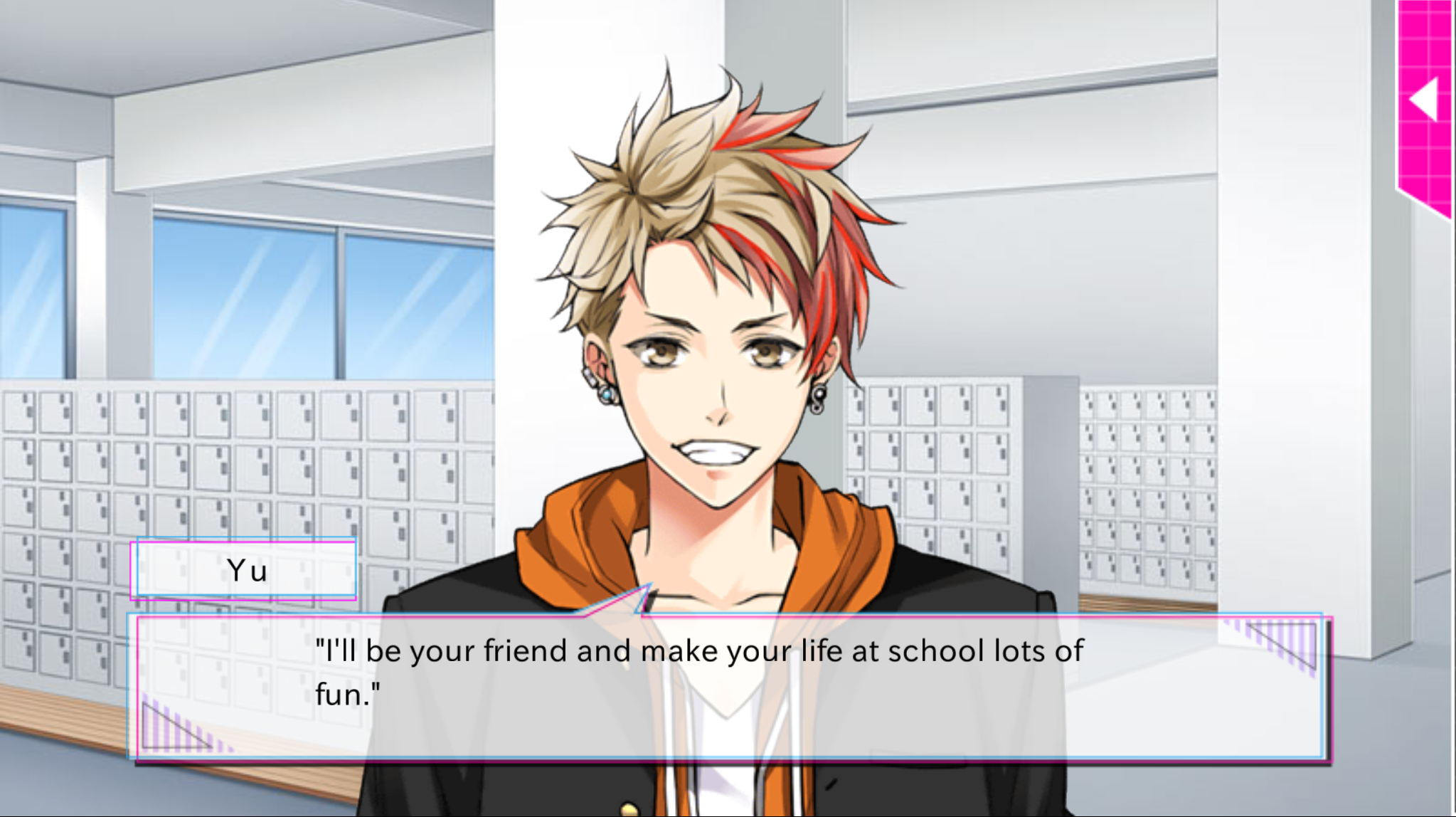 Yu Agatsuma is an adorable ray of sunshine and while he can be a bit out there at times, it’s easy to get swept along by his nonstop whirlwind of energy! Of all the guys, Yu is by far the most welcoming, he immediately offers to be friends with the MC and goes out of his way to make her feel comfortable at her new school. He makes it his life’s mission to ensure that the MC has as much fun as humanly possible, by inviting her out on trips, offering to walk to school with her in the morning, and even sharing lunch with her. Yu is always there to cheer the MC up when she’s down, usually with a smile and a piece of pineapple milk candy! As the story progresses MC and Yu grow close, striking up a comfortable friendship… they’re practically joined at the hip! 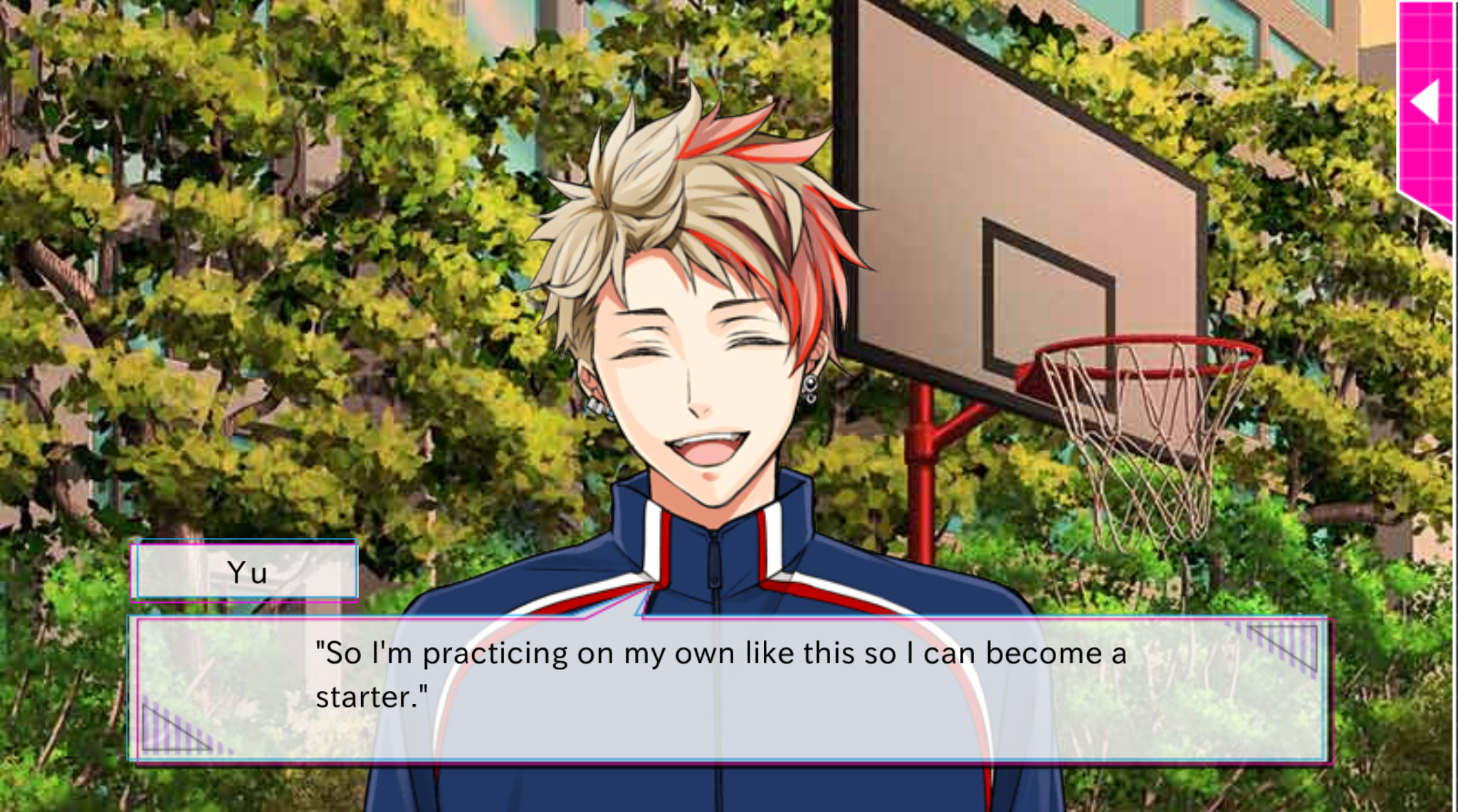 The chemistry between these two is electric, and it isn’t long before the MC’s friendly feelings towards Yu take a romantic turn. But, unfortunately for her, Yu has sworn off romance, so he can focus solely on basketball… it’s almost like he’s a different person on the basketball court. When he has a basketball in his hand, Yu becomes much more serious. He spends hours upon hours after school honing his skills and perfecting his form  so that he can one day make it on to the starting lineup of his school’s team. Yu is a much more driven and focused person than his cheerful smile and easy-going personality would lead you to believe, and honestly, I found that side of him just as endearing as the lovable puppy dog routine.

Like the main love interest, the central conflict of the route was pretty chill, especially when compared with angsty drama riddled stories of Ryoji, Rei, and Keiichiro’s routes. It mostly focused on developing Yu and the MC’s friendship, in fact most of the drama comes from Yu himself, and his inability to accept the MC’s feeling. 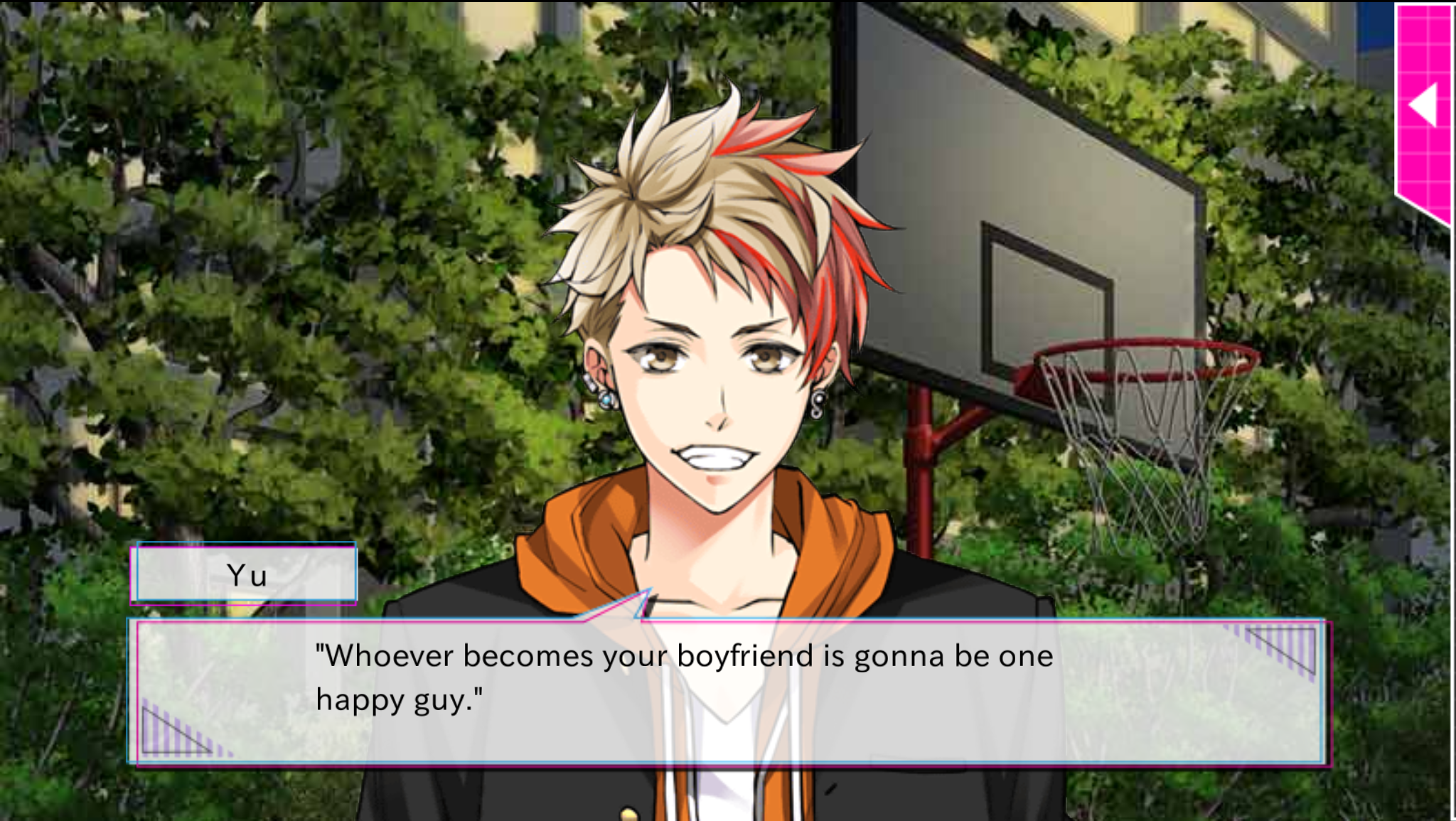 It’s actually painful to watch at times, on one hand you have the MC who is obviously in love with Yu, while knowing that he won’t return her feelings. Then on the other hand, you have Yu, who is crazy about the MC, but for the sake of his dreams, keeps unconsciously friend zoning the poor girl! Yu is one of those guys that’s kind to a fault, it’s like every word out of his mouth was intentionally crafted to cause the MC (and myself) to fall head over heels in love with him, throw in that adorable smile of his and  *sigh* perfection! This guy definitely wormed his way into my heart… only to smash it to pieces! Like the MC, I knew his heart belonged to basketball, but like a moth to a flame I was drawn in by his warm personalty and his dazzling smile.

I get it now! People have been suggesting I play Yu’s route since it was first released, and I get it… Yu is such a great character and his route was one of the sweetest routes in the game. I didn’t expect to get so emotional over a character, especially one so far out of my otoge tastes, but Yu genuinely surprised me. It was easy to fall for this adorable cinnamon bun, with his bright smile and supportive nature, this kid wormed his way into my heart!

Of course the route was not without it’s flaws.. Yu’s conflict with the seniors on the basketball team was rushed and did nothing for the overall progression of the story, I kind of feel like Voltage threw it in at the last minute to add unnecessary drama to an otherwise pretty chill route. While the chemistry between the MC and Yu was fine, the ending was tied up a little too nicely for my tastes. Also, I get that Yu is in high school, so he’s a bit younger than some of the otoge guys I usually romance, but Yu looked a little too young in his CGs… to the point that I felt like I was mooning over a 12 year old. But, even all of that wasn’t enough to turn me off of this sweet route. In the end I recommend this playing Yu’s MS, it may not be as dramatic or as angsty as the other routes in the game, but like Yu, it has a lot of heart. Yu is a great character and Voltage did a great job of showing him off.

There are two endings for this route, the Teenage Dreams Ending and the After Class Romance Ending. In the After School Romance, after the game, Yu takes the MC to the park where they finally confess their feelings for one another. In the Teenage Dreams Ending, a few days after the basketball final, the MC meets up with Yu at the school gym with a batch of her special candied lemons. This time around, there isn’t a better ending… they were both pretty tame…

Thank you for reading and Supporting Blerdy Otome! If you like what you see be sure to drop a like or a comment to let me know your thoughts about Yu’s Main Story!!

22 thoughts on “The Energetic Delinquent Who Stole My Heart: Bad Boys Do It Better!-Yu Agatsuma”