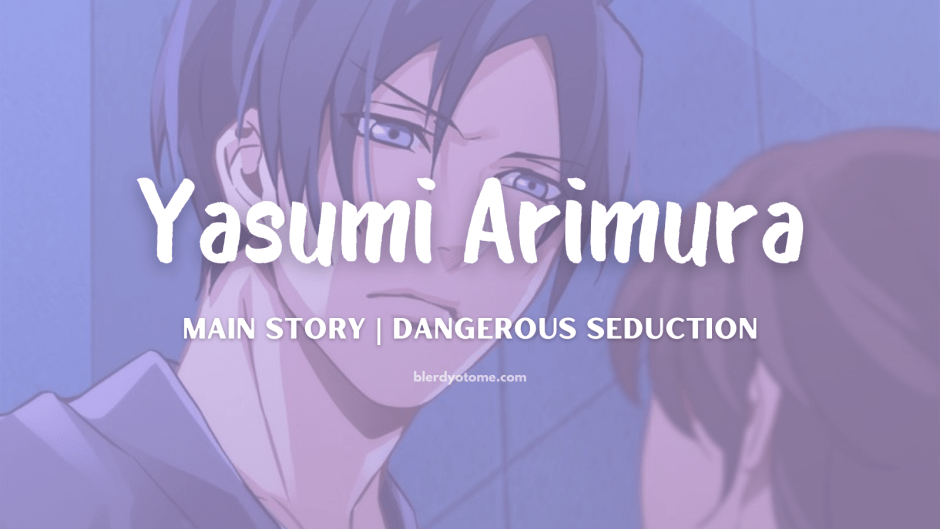 So it’s no secret that this was the guy I was most looking forward to pursuing in the game. I have a thing for the cold, emotionless characters. Maybe it’s the challenge of breaking down their walls that sets my fangirl heart aflame or maybe I’m secretly a masochist.

Whatever the reason, Yasumi Arimura had my heart from the first time I saw that cold expressionless mug in the prologue! But what really sold me on this guy was the masterful way he hurled insults…he had me at “dumbass”… I kid. This route was a roller coaster ride of emotions from start to finish, and even now I don’t know if I’ll be able to recover. If you want a general overview of Dangerous Seduction, click HERE, it’s covers the basic premise of the game and includes links to the other character reviews I wrote for the game.

Thoughts on the Route: What goes around, comes around…

So like in Masa’s route, the MC is unable to choose one of the guys as her personal bodyguard, so Yasumi Arimura volunteers as her hottie for hire. However, he makes it absolutely clear from the start that he’s really only doing it for the money and that he doesn’t care one way or another about the MC. He even has a cute pet name for her, which he uses throughout the entirety of the route… he calls her dumbass and you know what, I think this is a new personal favorite.

Only Voltage could make “dumbass” a term of endearment. However, the only consolation is that Arimura isn’t a condescending prick like Masa was, in fact he doesn’t even interact with the MC very much in the beginning, mostly delegating his duties to the other guys or just plain leaving the MC to her own devices… But, wait, that’s not entirely true, Arimura uses another, much more questionable method for monitoring the MC’s activities while she’s under his care…

Yasumi Arimura is a cold, misanthropic hacker, who is more comfortable around computers and his bombs than he is around animals and people. He doesn’t even really associate with his fellow teammates outside of missions, and even then he tends to enjoy working alone. He doesn’t see the point in getting close to other people unless there is some benefit or payout. So it would only make sense that he wouldn’t approach his bodyguard duties like a normal well adjusted individual. Instead of guarding the MC day and night like any competent bodyguard would, Arimura instead fits the MC with a state of the art tracking collar, which also functions as a listening device. Yeah, he fits her with a high tech dog collar *bruh*!

We’ve been through this Voltage, I don’t care what you call it or how you dress it up, a dog collar is still a dog collar. So, Arimura uses it to listen in on the MC, so he can know what she’s up to at all times without having to follow her around 24/7. However, his plan backfires a bit when the MC decides to use the collar to get a bit of revenge against her eavesdropping “protector”. You know that saying, ‘Listeners never hear good of themselves’, well, let’s just say that Arimura gets an earful courtesy of the MC and the guys…. and it is hilarious! It’s only after Inui forces him to guard her properly that we see the MC and Arimura interacting with one another.Unlike, Masa’s route, we definitely spend a lot more time building up the relationship between the pair, so I wasn’t caught off guard when the MC began developing feelings for Arimura.

The romance in this route kind of reminded me of an opposites attract rom-com, what with Arimura’s reluctance to guard the MC and their constant bickering. But, as a whole it developed well and there were some genuinely sweet moments between the pair. Arimura isn’t the type of guy for grand romantic gestures, it’s the small things that he does that show that he is softening towards the MC.

Arimura really has some really sweet moments in this route, like when  he offers the MC his jacket so she doesn’t get wet when they get caught in the rain or the time he casually walks on the side of the sidewalk closest to the street. And that’s what I really loved about him, he’s not some suave Casanova, he’s awkward and a bit rough around the edges. There are times when he hurts the MC, not because he wants to, but because he doesn’t know how to interact with other people.

Since, Arimura is a hacker, he isn’t required to interact with very many people on a regular basis, so he was already predisposed to being a little on the antisocial side. Most of the conflict in this route comes from Arimura’s inability to put his trust in other people. In the past he was betrayed by a person he trusted so he closed himself off completely, becoming the cold, emotionless mess we know and love. But the more time he spends with the MC, the more expressive and open he becomes.

Throughout the route we get to see several different aspects of Arimura’s personality, from the cold detached hacker to the awkward cinnamon bun that saves his favorite foods for last so that he can savor it. Arimura might be a criminal, but that doesn’t mean he’s a bad guy. He would never use his abilities to do harm to another person or for personal gain, and there was even a moment in the route where the MC asks him to hack into the streetlight system so she can hail a cab (it’s not as stupid as it sounds), which he refuses on moral grounds. Arimura may be a lot of things; cold, calculating, and more than a little rude, but he has a strong sense of justice and he can always be trusted to come to the aid of those he cares about.

Do I Recommend Arimura’s Route?

I know I was biased about this route from the start, and I will fully admit to that, but this route was infinitely better than Masaharu’s! Don’t get me wrong, Yasumi Arimura isn’t Mr. Sunshine and Roses, I had some fundamental issues with his route as well, but as a whole this was just a better written story. I don’t know what that crap was Voltage pulled with Masa’s route, but I’m glad they got it out of their system early, because if this route had been anything like the first one, I might have lost it!

Everything about this route was better! Voltage did a great job of blending the action and drama of the main narrative/ conflict with the romantic development between Arimura and the MC. It seemed more natural than it did in Masa’s route, because everything connected to form a cohesive narrative.

The romance was directly linked to Arimura’s character development, which was in turn integral to the resolution of the main conflict of the route. The conflict was definitely less action-y than Masa’s route, but that was to be expected, Arimura is a hacker which is more of a passive skill set than being a gun toting sniper. I wish we got to see Arimura show off his hacker skills a bit more, but I’m sure there will be more opportunities for him to demonstrate his mad hacker skills in future stories.

I absolutely loved this route, Arimura was a well developed character and the story did an excellent job of showcasing his growth over the course of the route. His nastiness at the beginning can be a bit off putting for some players, but as the story progresses he softens considerably… in his own awkward way!