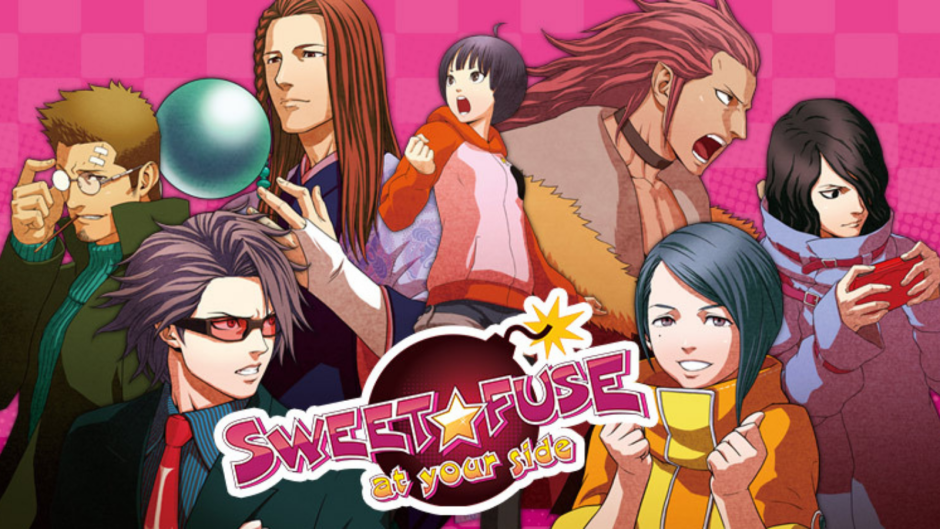 So I came across Sweet Fuse At Your Side back in 2013. I remember all the hype surrounding it, but at the time I didn’t have a PSP. So I wasn’t able to join in the first wave of players. When I was able to gain access to a PSP and a copy of the game, I absolutely loved it! While Sweet Fuse is an otome game, it plays more like a adventure, puzzle visual novel.

The first route of the game that I played was Subaru Shidou, because I don’t know if I mentioned this before…but I have a thing for megane men. Plus he’s gorgeous, the typical otoge hottie and that suit…sexy!

Sweet Fuse: At Your Side stars Saki Inafune, niece to legendary game developer Keiji Inafune. Saki’s famous uncle opens an amusement park and Saki attends the opening ceremony, but things really heat up when Count Hogstein—a malevolent pig—takes over the park, and holds everyone hostage.  Saki, along with seven sexy men, decides to enter Count Hogstein’s deadly game in order to save her uncle and the other hostages. Will she be able to solve the complex puzzles that Count Hogstein and his merry henchmen have in store? And most importantly, which steamy bachelor will Saki choose?

Sweet Fuse At Your Side Review

A Fun Day at the Amusement Park

You play as Saki Inafune, the high school aged niece of renowned game creator, Keiji Inafune. She is on her way to the grand opening of Japan’s largest amusement park, with attractions based on several of her uncle’s video game creations. Everyone has turned out for the celebration, the press, idols, celebrities, and even the police, it’s looking like the day is going to be one of fun. That is until, the mysterious, Count Hogstein interrupts the festivities with a dangerous ultimatum.

He kidnaps Inafune and the park’s board of directors and demands that seven of the park’s attendees participate in a seven day game or else he’ll blow the entire park and everyone in it sky high. With her uncle’s life on the line Saki volunteers to participate in the dangerous game. She along with six eligible bachelors must solve the sadistic pig’s puzzles and save the hostages within the seven day time limit or suffer the consequences. But, there is more to these men than meets the eye, in fact they are all connected to an incident from long ago. So join Saki as she uses her intuition and brains to solve puzzles, defeat Hogstein…and find love along the way!

Solving Puzzles for Your Love

I absolutely love this game, it puts a nice spin on the typical otome premise. While romance is a major plot point of the game, it isn’t the only point of the game. There was a lot of thought put into the Hogstein Game, and each puzzle presents a new, unique challenge for the player. Then there’s the mysterious incident that forms the basis of the game’s subplot. In order to get the whole story on that, you have to actually play all of the routes in the game, but most especially Makoto’s route.

Normal choices sometimes have an effect on the affection levels of individual characters. There are also moments when Saki will get angry and the player has the choice of letting her unleash her anger or restraining her emotions. This can lead to some hilarious results, so I suggest playing around with both. In addition to the regular choices, there are moments when Saki has to use her intuition to solve a particularly difficult puzzle. The player must select the appropriate key words and phrases from a floating list, if done correctly Saki will solve the puzzle.

The game utilizes a branching story line, so the character interactions and choices made throughout the game are essential to deciding which ending you get. All of the characters (except Makoto) are up for grabs at the same time, so if you are aiming for a specific character, tailor your choices towards that character.

The characters are fun and engaging, each with their own character growth and development. You actually get invested in their stories and get caught up in their struggles and successes both as individuals and as a collective group. While I will admit that there were some characters that I liked more than others, the each member of the cast has their own merits.

The art is lovely, as expected from a commercial game like Sweet Fuse. The character designs were nice and seemed to really fit well with each character’s personalities. The sound and music was perfect and it only served to really drive home the emotions of the plot. The gameplay is simple enough to pick up on, so there isn’t a huge learning curve. There are a healthy amount of choices in each route and the reading really isn’t that dense.

Overall, I enjoyed this game and I highly recommend playing it if you have the chance. It’s currently available in the PSN store, so if you have a Vita or a PSP definitely purchase it there!

24 thoughts on “Sweet Fuse At Your Side Mini Review”