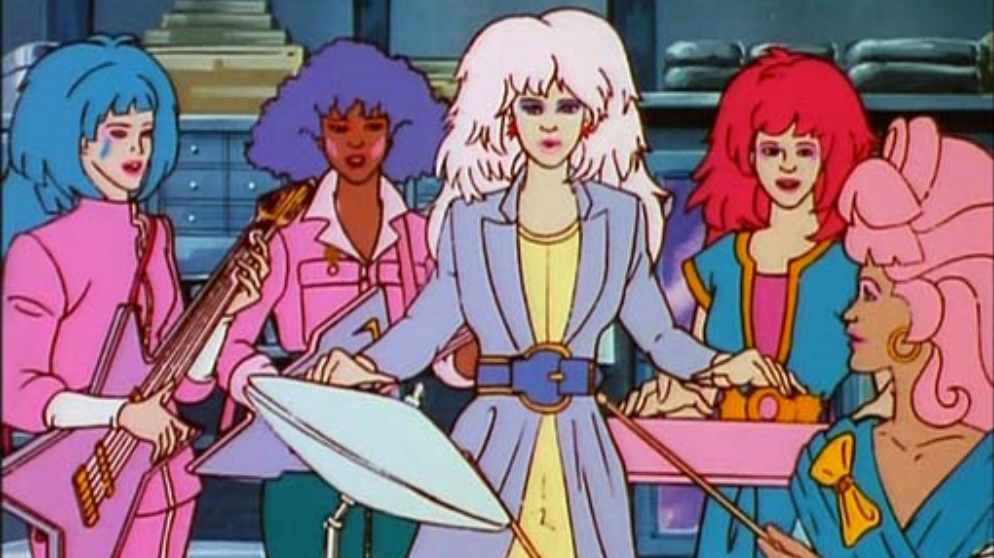 TGIF! Here we are again with another Fangirl Friday! This week I am covering a cartoon series that is…truly, truly, truly OUTRAGEOUS! Yup, that’s right I’m covering the 80’s animated show, Jem and the Holograms! So put on your legwarmers, grab your pink eye shadow and get ready for a glam rock experience you won’t soon forget! We’re taking a trip back to a simpler time, where most conflicts could be resolved with…musical battles?

I am definitely not an 80’s kid, so I didn’t grow up with the series, I only recently became acquainted with it, so rest assured, this is not a nostalgia fueled post. This show is definitely a product of the 80’s, so I’ll admit that some aspects of this show can seem pretty cheesy to a modern audience… But, for some reason as ridiculous as this show is, it still manages to suck you in. Maybe its the catchy songs, or maybe it’s the over the top glam fashion that permanently burns itself into your retina…

Jem and the Holograms is an American cartoon series created by Christy Marx. The series originally ran from 1985- 1988, airing for three seasons (65 episodes). Jem follows a young woman named Jerrica Benton, who after her father’s death inherits Starlight Industries, a popular music company and the Starlight House, a home for orphan girls. Unbeknownst to her, Jerrica receives a two other items, a set of earrings and a super computer, named Synergy that allow her to alter her appearance with the use of life like holograms. When Starlight House falls on hard times, Jerrica uses her new powers to create a singing alter-ego named Jem. Along with her sister, Kimber Benton and her adopted sisters/friends Shana and Aja, they form the glam rock group Jem and the Holograms in order to earn money for the house. Most episodes revolve around Jerrica attempts to balance her normal life with that of her superstar alter ego, while still managing to care for the foster children at Starlight House. The series also introduces a rival music group, the Misfits, who constantly try to undermine Jem so that they can take over the music scene.

The show is your typical Saturday morning cartoon, nothing too complicated or especially deep. Typically a conflict would arises that Jerrica is unable to deal with so she transforms into Jem in order to solve it usually by way of a music competition. The main conflict coming from Jerrica’s need to hide the fact that she is Jem, which causes strain on her relationship with her boyfriend Ryo, who is in love with both Jem and Jerrica…which is apparently okay because they’re both the same person…(no, no it’s not) Each of the members of the Holograms have their own dreams and interests outside of singing, and each member occasionally gets their own character specific storylines throughout the course of the show.

Of course there are several musical numbers performed on the show, which are usually accompanied by a music video like montage. Oddly enough most of the songs are extremely catchy and some are even good, but when the singing voice for Jem is real life singer-songwriter Britta Phillips, the songs better be on point.

Sure, like most cartoon series, this show was just a ploy to sell dolls…but it’s addictive. So, if you have free time and a Netflix account, definitely give this series a watch… It’s an interesting way to kill time, who knows, you might actually enjoy it!

Do you have a favorite childhood cartoon that you want to share? Have you seen Jem and the Holograms? Who’s your favorite Hologram?  Do you have some show suggestions for future Fangirl Moment posts? Feel free to Comment on this post or Ask Me on my tumblr!  As always Thank You for reading!

10 thoughts on “Fangirl Moment: Jem and the Holograms”