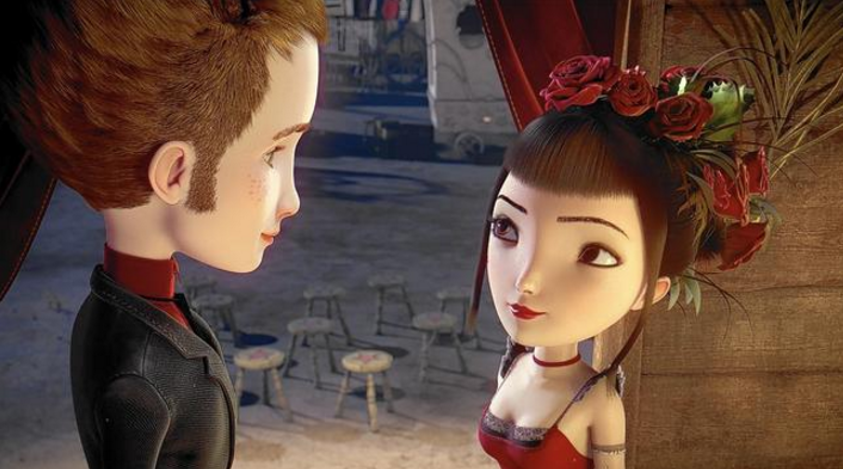 TGIF! Here we are again with another Fangirl Friday! This week I’m gonna hit you guys in the gut with a French animated film that showed up on my Netflix homepage…Have you ever watched something so strange and confusing that you couldn’t help but fall in love with it’s awkwardness? Well that’s what happened when I first watched the animated film, Jack and the Cuckoo-Clock Heart. It was a surreal musical experience that I simply won’t soon forget, and I’ll admit I teared up at the end too.

Jack and the Cuckoo-Clock Heart (La Mécanique du cœur) is a 2014 animated film, which follows a young man, Jack (voiced by Mathias Malzieu) who was born on the coldest day of the year. Because of this he was born with a frozen heart, so a local midwife/witch replaced his dead heart with a small cuckoo-clock. While the procedure did save his life the midwife, Madeleine, warns young Jack there are three rules that he must obey in order to ensure the longevity of his artificial heart.

At first for young Jack following the rules is easy, as he has spent most of his life shut away from others save Madeleine, who has since adopted him as a surrogate son. But, as years pass he soon wishes to venture from home, out into the town at the bottom of the hill. Reluctantly Madeleine agrees, but not before reminding him of the importance of the rules, especially Rule #3. Enraptured by the town, Jack wanders off from his guardian and into the path of a fiery young street performer, Miss Acacia. He immediately falls head over heels in love with the young singer, which troubles his frail heart. From that moment Jack embarks on a journey of love and self discovery.

The film is based on a concept album by French rock band, Dionysos and the resulting illustrated novel, written by the band’s lead singer, Mathias Malzieu. While the concept for all three are the same and many of the same events occur in each, they each have completely different endings. Of the three the novel has a much happier ending than both the album and the film, which both end on a rather tragic and bittersweet note. The film creates a stunning story book like narrative with a dynamic cast of quirky and eccentric characters. You find yourself getting swept up in the fantasy and magic of it all, which is only enhanced by the equally quirky musical lyricism, composed by French rock band Dionysos.

The plot is not without it’s faults, but some how the clunkiness of it works to create a rather fresh viewing experience. However, like all dubbed films I had a bit of an issue with the dialogue. In an effort to remain true to the original French text, the English version seems overly wordy. There isn’t a single moment in the film that someone isn’t talk/singing. Some of the lines seem rushed, as the cast tries desperately to cram each and every word of dialogue without so much as a breath between them. It was like listening to someone recite an especially long tongue twister from memory. That aside, I found myself thoroughly enjoying the film as a whole, and I highly recommend seeing it, if you have the chance. The strangeness of it all is oddly satisfying and the visuals are simply beautiful.

Have any of you seen Jack and the Cuckoo Clock Heart? What did you think about this post? Do you have any suggestions for Fangirl Moment post? Any burning questions? Want me to review a specific book, film, anime, manga, show, or webcomic? Feel free to Comment on this post or Ask Me on my tumblr!  As always Thank You for reading!

15 thoughts on “Fangirl Moment: Jack and the Cuckoo-Clock Heart”