If a tree falls in a forest and no one is around to hear it does it make a sound?

Think about that for a minute,  I’ll wait…got your answer? Okay good! Well let’s take this same scenario and apply it to anime.

If a child watches an anime but doesn’t know it’s an anime, is it still considered their first anime?

Like many of you my first exposure to anime were those shown on Cartoon Network’s Toonami or on Kids WB after school. You guys know what I’m talking about, the big three: Sailor Moon, DragonBall Z, and Pokemon. Just about every 90’s kid remembers plopping down in front of the TV after school to watch one of these three shows, but back then they were little more than your typical cartoons. Sure the art was different, but for all intents and purposes, I thought they were cartoons. I didn’t find out until much later that they were even called anime, let alone what an anime was in the first place. So even now it’s hard for me to even think about them as anime, I still think of them as cartoons… So when I read that I had to talk about my first anime, I was at a bit of a loss for what to do. Sure, I could write at length about Sailor Moon or Pokemon, which are technically tied as my first anime, but that doesn’t sit well with me. I consider my first anime to be the first show that I actually knew was an anime when I first watched it, so my “first” anime is….. 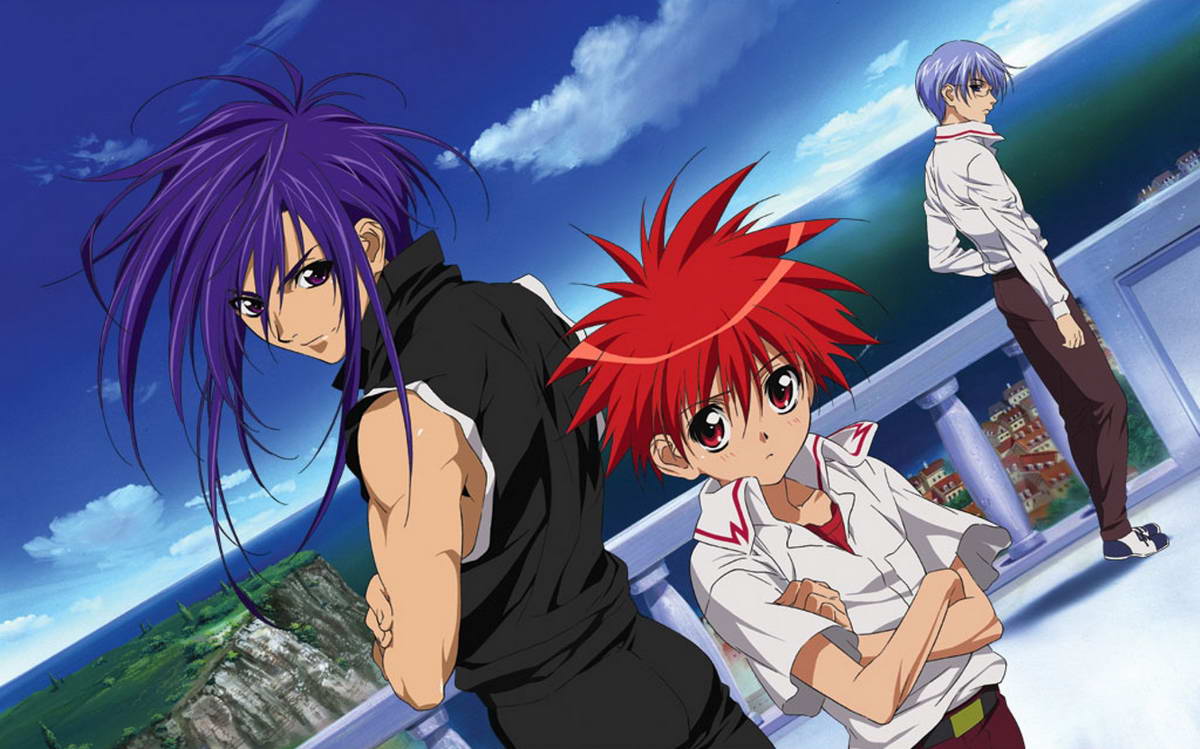 Yup, my first anime was D.N. Angel, you can call me a cheater if you want, but this was the first anime that I was actually aware was an anime while I watched it… I remember going over to a friend’s house one day and watching the first few episodes online. I’d had no idea what an anime was (mind you I hadn’t seen Naruto yet) so my friend had to explain it to me. After explaining what an anime was she then started listing off the Big Three, two of which I’d personally watched as a kid…let’s just say my mind was blown! So after my BSOD expression cleared, we settled in to watching the first 3 or four episodes until we fell asleep. My dreams filled with images of Dark Mousy in all his snarky glory.

D.N. Angel, released in 2003, is a 26 episode slice of life, fantasy series adapted from the ongoing manga series of the same name by Yukiru Sugisaki. The series follows, 13 year old Daisuke Niwa, an average Joe….who happens to be descended from a long line of phantom thieves. On his 14th birthday, he plucks up the courage to confesses to the girl of his dreams, Risa Harada, but she turns him down hard. Heart broken and full of teenage angst, he heads home for a good long mope. In the midst of his despair, Daisuke’s body undergoes a strange transformation…it’s not what you think…that night Daisuke’s appearance changes into that of the handsome, legendary phantom thief, Dark Mousy. Before he can fully freak out, his mother explains that the transformation is completely normal, having affected all of the Niwa men for generations. The change she explains is triggered by the host’s romantic feelings of love, so think magical puberty. The rest of the story follows Daisuke as he tries to balance his normal life with that of his secret phantom thief alter ego. To make matters worse, Dark has his own consciousness within Daisuke which often gets him into trouble as they both struggle to coexist.

I know this isn’t the best anime ever and that it’ll never be a fan favorite, but none of that matters. This anime holds a very special place in my heart as my first real anime experience.  Sure it was cheesy and sure the plot was kind of rushed, but I just liked the characters, Daisuke was a likable underdog, and Dark a lovable rouge. I liked that despite being two separate entities with their own thoughts and feelings, they still managed to come together for their own mutual benefit.

I was so in love with the series that I even went out and bought all of the available manga volumes (this was before I found out how bad Yukiru Sugisaki was at finishing series). I never had that with with Sailor Moon, hell, I couldn’t even have told you what all happened in Sailor Moon until a few years ago in college, when I went back and re-watched the whole series. As for Pokemon, while I loved the first few seasons of the series, I was much more into the games than anything else. So, while both were memorable, I consider D.N. Angel and not Pokemon or Sailor Moon to be my first anime!

What do you think about my choice? What was your first anime series? Was it Sailor Moon, Pokemon, or DBZ…or was it some thing different? Let me know in the comments section! As always, Thank you for reading!!