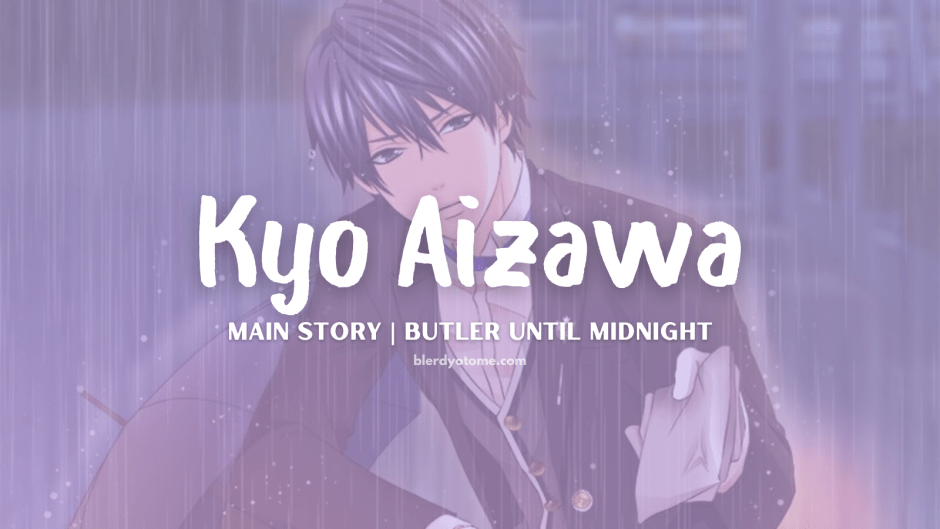 Kyo Aizawa is one of the butlers I that caught my eye in Butler Until Midnight. He’s cool, calm and collected and I don’t know there’s something about stoic characters that makes me swoon. I have been wanting to play this route for some time now, yet I never could find the time to. Ever since I saw his blank, expressionless face in the prologue, I knew that I just had to play his route. The title of  cool loner does not do him justice. There is so much emotion beneath his blank stare if you only take the time to look. 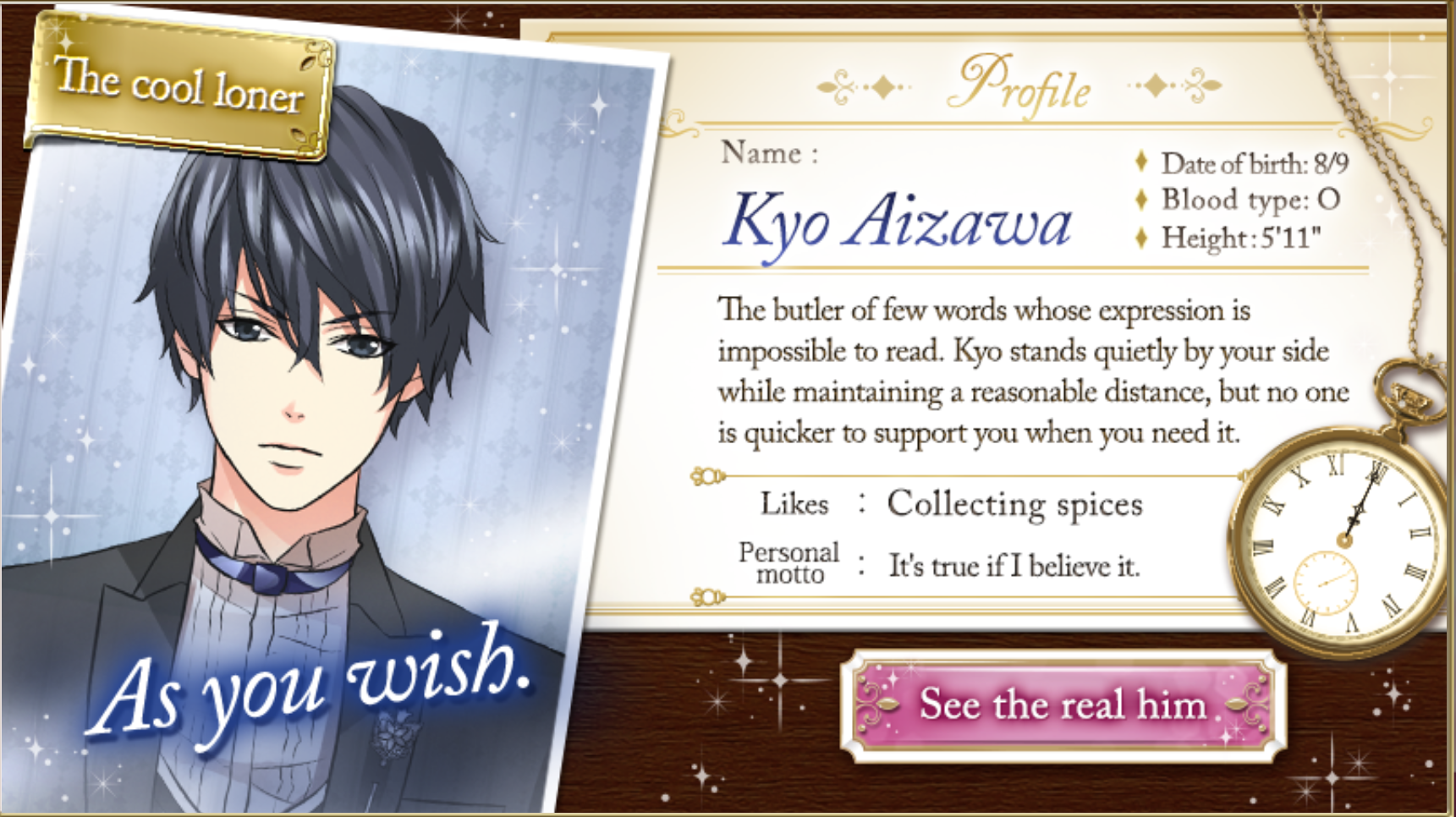 Thoughts on Kyo Aizawa: The Man Who Stands in Your Shadow

I will try to keep my fangirling to a minimum (no promises). Cool, aloof types are my bias and I usually know what I’m getting in to from the beginning. But Kyo still managed to sweep me off my feet. Kyo Aizawa is a dedicated and capable butler, he silently obeys the commands of his employer without any complaint. He and Tomoki are alike in that way, both butlers put the needs of their employers before their own.

But, unlike Tomoki, Kyo never chastises the MC nor does he complain about her shortcomings. He silently guides the MC through her etiquette lessons. Wordlessly taking care of her every need, even before she has the chance to ask. At first his quiet nature is unsettling. But the more time the MC spends with him, the more she realizes that there is so much more to his blank expressions than she ever knew. In fact, Kyo is the butler with the deepest and purest emotions.

Kyo’s life before becoming a butler was normal until an incident led to his family being ostracized by others. Unwilling to let their circumstances lead them to further disgrace, Kyo and his mother vowed to continue living honest lives. To provide for his mother and young sister, Kyo worked part-time as a shoe shiner for the Ichijo family. When his family began facing more hardships, Kyo found himself committing the very act that lead to his family’s misfortune. Guilty and disgusted at having sunk so low he turns himself in to the head of the Ichijo family. Instead of punishing him, the head forgives him for his transgression.

Kyo is then hired as one of Ichijo’s personal butlers and his family provided for. Unable to forgive himself, Kyo dedicates his life to Ichijo for the next ten years. His past was so heartbreaking, it really explains how Kyo became the emotionless shadow he is today. I found myself really empathizing with his situation. Especially after knowing how much of an impact it has had on his life. Even now he still harbors a great deal of guilt over the situation. As a result he puts his all into preparing the MC for her societal debut.

The relationship between the MC and Kyo, is one of master and servant. In the beginning, Kyo meticulously carries out his job as the MC’s butler. His quiet demeanor enabling him to discreetly carry out his duties with the least effect on her daily routine. He follows her like a shadow, always ready to come to her aid at the drop of a dime. But, as the story progresses, his dutiful obedience gives way to something more.

His devotion seems to derive from something more than obligation. Kyo seems to be putting his whole heart into insuring his mistress’s happiness. His intense gaze seems to linger and his poker-face suddenly seems to relay some emotional depth. In fact, his feelings for her run much deeper than even he or the MC could have ever imagined.

Kyo constantly struggles with his duty as a butler and his guilt over his past. Throw in his devotion to the MC and you have a man full of powerful, conflicting emotions. Kyo believes that as a butler his only task in life is to serve as his master/mistress’s shadow. Despite his role in their lives he will never allow himself to ever become anything more than just their butler. To Kyo, the MC is like the sun, someone so bright and beautiful that he can’t help but look, even if he can never touch her.

He constantly finds himself overstepping the line of duty, just so he can catch a glimpse of her smiling face. I found his devotion for the MC both heartbreaking and sweet. You can really feel how deeply he cares for her. But his guilt about the past keeps him from reaching out and telling her how much she means to him. Instead he resigns himself into being a shadow, silently basking in her warm glow.

Thoughts on the MC: She Shines so Bright

I loved the MC in Kyo’s route! Not only is she a considerable improvement on the tragedy that is the prologue MC. But she manages to surpass the other MCs that I have played so far in Butler Until Midnight! She’s an MC with backbone and I wish more Voltage MCs were like her.

At the start of the game she has just secured her dream job as an assistant at a top fashion magazine, when the butlers inform her that she has to undergo an intense etiquette routine. When they suggest that she forgo her job for the training. She quickly shuts them down, demanding that they work around her schedule instead!  I wanted to do a happy dance when she shut both Yuma and Tomoki down. Finally, I thought, this is what I have been waiting for! She then goes through the rest of her training with almost no complaints. Even when she’s put on a diet so that she can fit into a dress her father had made for her mother.

On top of that she handles her job professionally despite being a complete greenhorn, even gaining some praise from her hard ass of a boss! Unfortunately Voltage decided that this would be the route that they introduce a “love rival,”. I use that term loosely, because the “rival” is really more of an annoying prick. But, thank goodness the MC handles the situation with grace and clearly shuts the other man down when he starts going on about booty calls. *rolls eyes* But that isn’t the only blip in the road for our unfortunate heroine. The poor girl gets groped on the train not once, but twice. Lucky for her, that her perfect shadow is there to save the day, or the situation might have escalated.

But, what really deserves the spotlight in this story is the MC’s kindness towards an extremely damage Kyo. She really does her best to assuage his guilty conscience over his past deeds, by helping him see just how amazing and sweet he really is. When he opens up about his past, she doesn’t condemn him, instead she accepts it as a part of him. You definitely see a lot of growth in this MC over the course of the story as she comes to terms with herself and her feelings towards her butler.

Do I Recommend Kyo’s Route?

Overall, the plot progression was great, the relationship between the MC and Kyo never felt rushed. The character development was seamlessly done, and this is definitely on of the better written Voltage routes that I have read. As with Tomoki’s route, the music complemented the story beautifully, the piano definitely gave the story the right emotional push necessary to keep riding this emotional roller coaster until the end. The CGs for this route were beautiful, there wasn’t a bad one in the batch (and I highly recommend getting all the stories, the completion bonus image is to die for). The end movie was cute, but I will say that I am not a huge fan of Kyo’s seiyuu. He just sounds a little too young, but I’m sure I’ll get over it.

If I could recommend this story more than once I would, believe me I would! Kyo is my new favorite route in this game. He was a complete dream, and I highly recommend this route to anyone still on the fence about Butler Until Midnight. While Kyo doesn’t express his true emotions as readily as most, it does not mean that he is completely without them. Kyo’s emotions run deep, and can be seen through his actions and his devotion towards his position as a butler. I am really looking forward to seeing how the rest of his story progresses from this point.

8 thoughts on “Butler Until Midnight | Kyo Aizawa Review: The Silent Butler Who Stole My Heart”