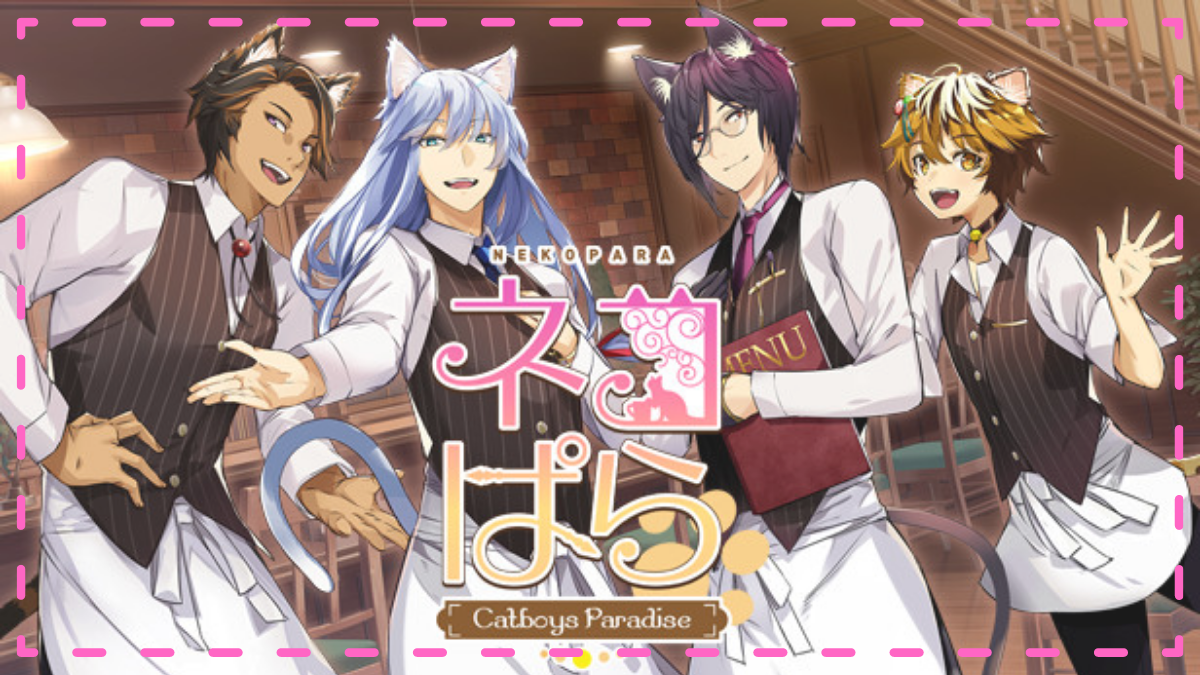 Nekopara – Catboys Paradise is proof that if you wish hard enough, dreams really do come true! What started as a 2019 April Fool’s Day joke by Japanese publisher NekoWorks has been made into an actual game—live out all your catboy fantasies in this fun otome release! After your grandfather passes away you inherit his café, a daunting task to say the least, but with the help of four handsome catboy trainees… maybe you’ll be able to make it work!

Your grandfather has recently passed away and you end up inheriting his café and house. You intend to keep the café running as a tribute to your grandfather, but you have no idea as to where to start. That’s when a school gets in touch with you and asks if you are willing to host some trainees who have some experience in running a café. You take the offer without much hesitation. To your surprise, however, the trainees are not four humans but four humanoid cats! Humanoid cat workers aren’t that rare these days, but this is still your first interacting with one. And thus, your story begins as you work alongside four catboys! 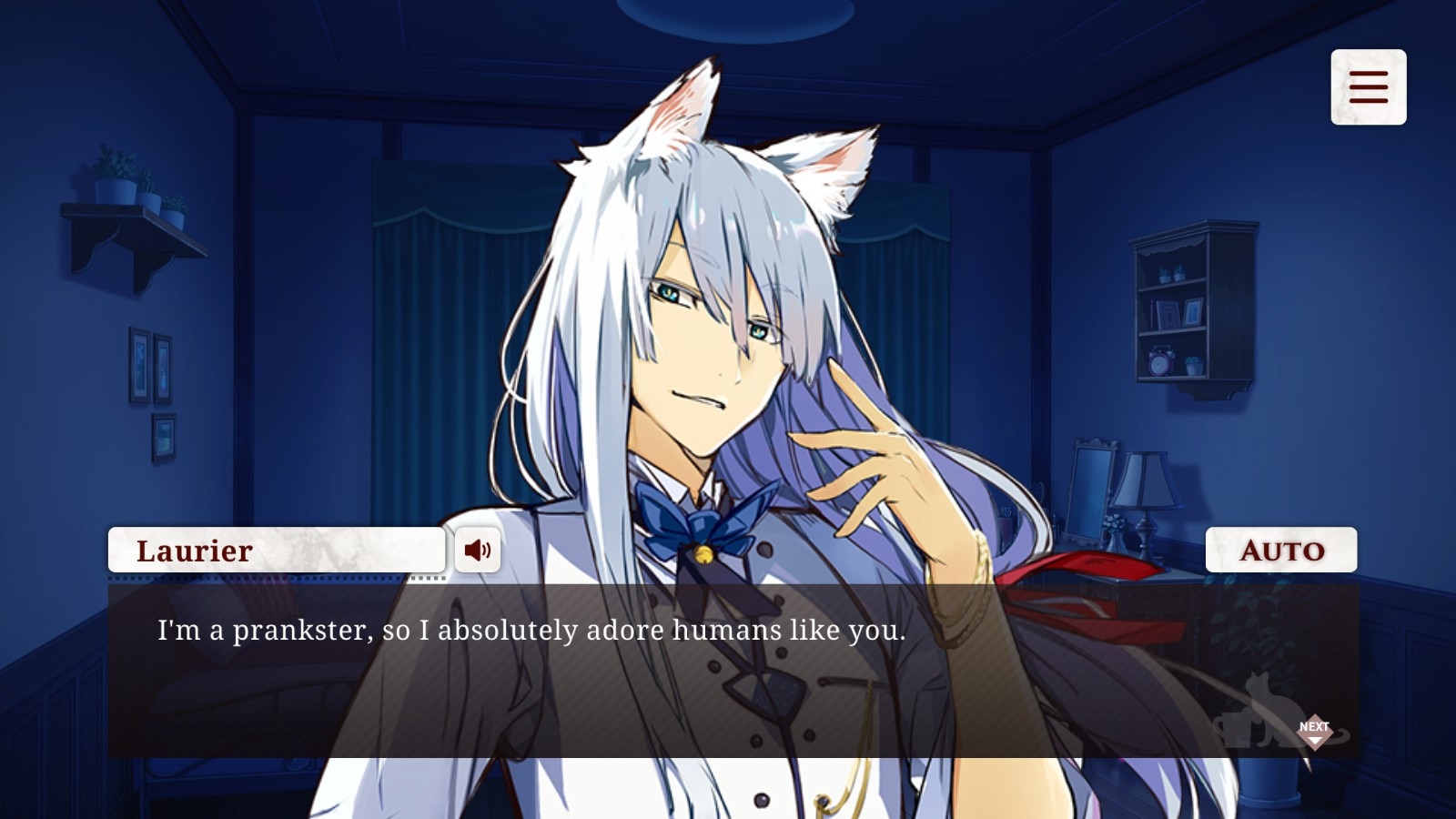 The sleepy prince who does things in his own way

I didn’t know what to expect with Laurier, he comes off as a bit of a lazy catboy who would much rather nap than do any real work, but he’s surprisingly really talented and smart… if only he applied himself more. One thing he is absolultely dreadful at is cooking… sandwiches he can manage, but anything with a stove is a no go. Lucky for him he’s ridiculously handsome and a bit of a shameless flirt, so he still attracts a lot of attention from the ladies. He has a tendency to sneak into the heroine’s room at night and he isn’t opposed to taking a cat nap on her lap. Laurier is cute and while I liked his design, he was too much of a tease to really appeal to me… 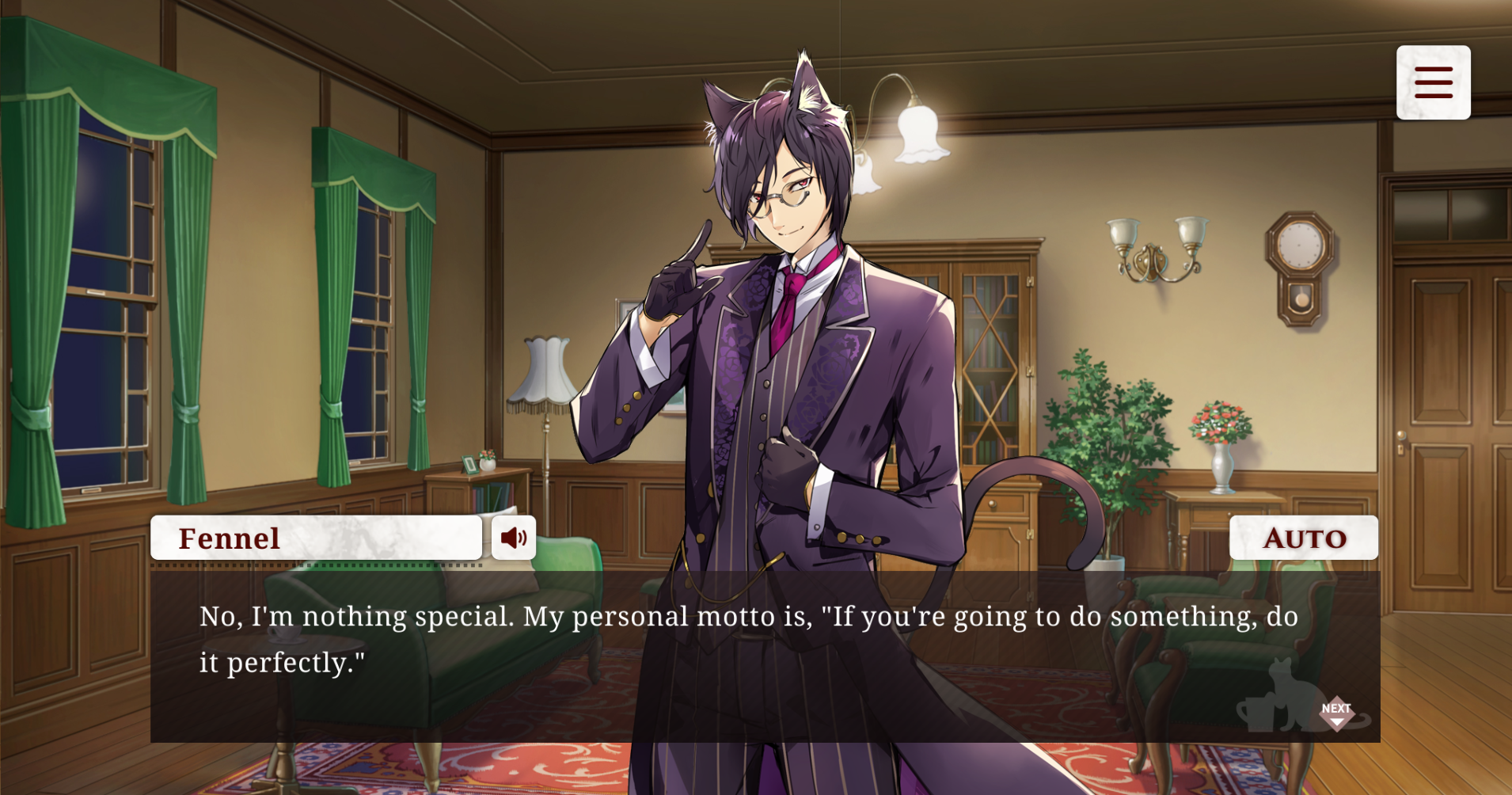 The supportive catboy who aims for perfection

MEGANE!~ I love me some megane and with the added bonus of being a handsome catboy, Fennel was very high on my list! He’s your stereotypical megane character—prim and proper and a bit of a perfectionist. He definitely gives me butler vibes, and it’s only fitting that he’d be great at managing the day to day running of the café, even studying café management in his spare time. He can be a bit stiff when compared to the other guys, but when he gets a whiff of tuna all his composure disappears and his catboy instincts come to play. I am biased, I love cute megane boys, but Fennel’s soothing demeanor definitely puts my heart at ease. 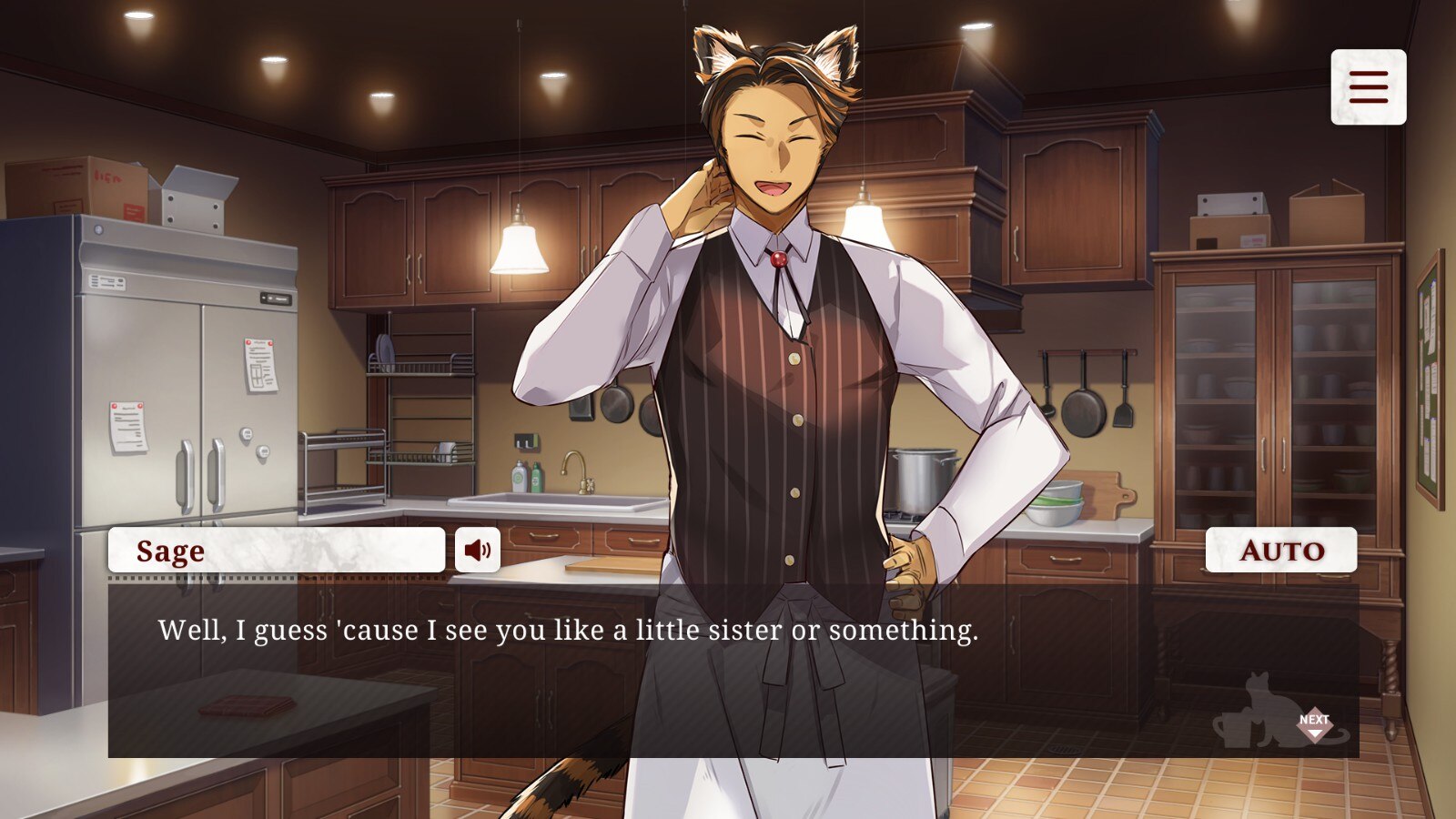 The strong, yet kindhearted older brother

Speaking of reliable, big bro catboy Sage is always there to give you a warm hug and a helping hand. He’s cheerful and dependable, and just a big ol teddy bear… and he COOKS! I don’t know about you all, but any man that can cook is A-OK with me! In true himbo fashion, Sage doesn’t really sweat the small details, kind of just going with his gut, but he always makes sure everyone around him is nice and comfy. His only flaw, is that he sees the heroine as a little sister… which can be a bit of a mood killer, since I absolutely don’t think of him as a brother… Swiggity swooty, I’m here for that catboy booty… 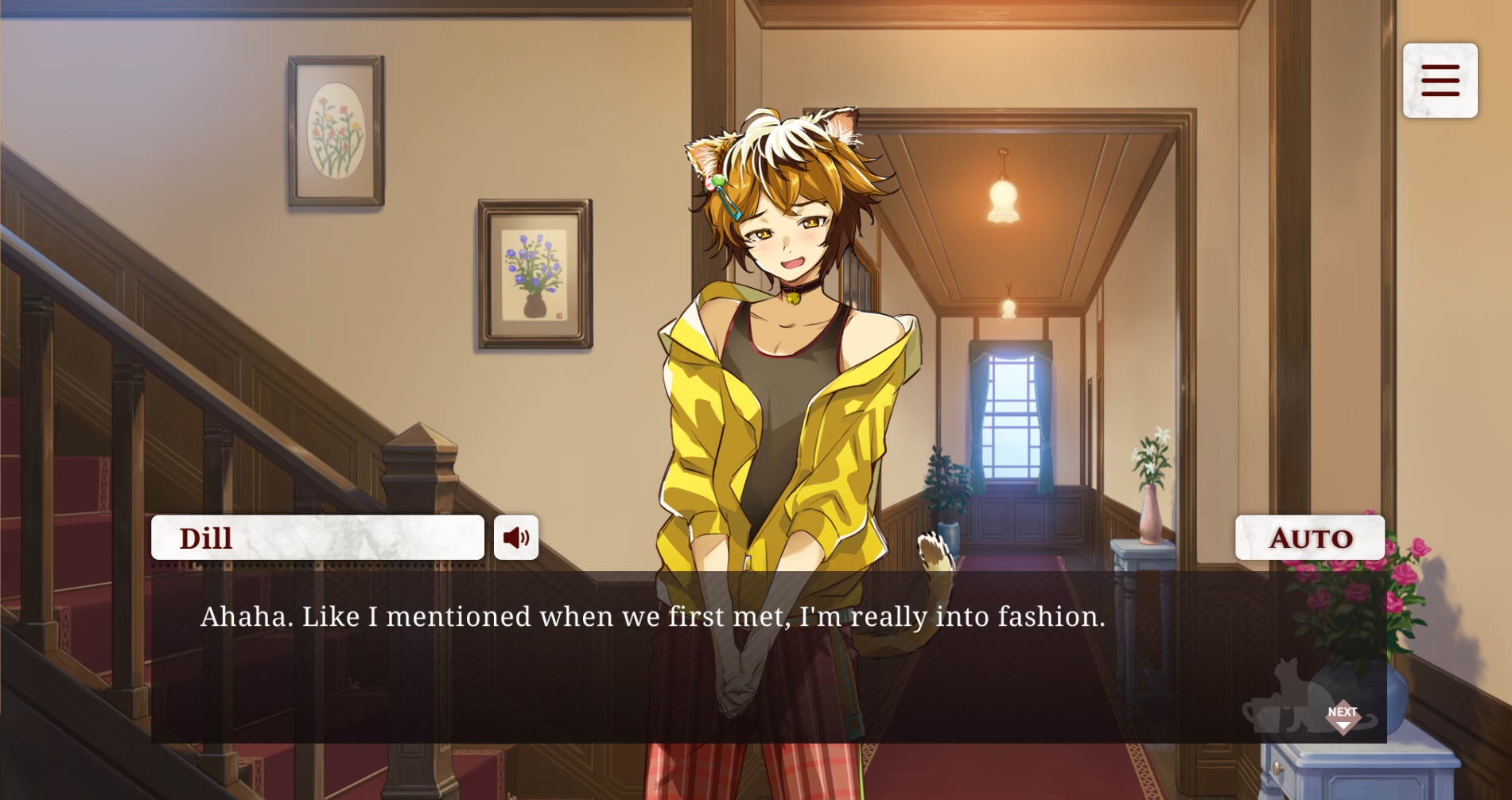 Dill is… frickin’ adorable! LOOK AT THAT FACE!! Don’t you just want to pinch his cheeks and give him lots of soft head pats?! *ahem* Dill is an easy-going and fun catboy who gets along well with everyone. He’s the most approachable of the catboys and I like how open and honest he is with the heroine. Dill is a bit of a fashionista, buying loads of fashion magazines and even offering to give the heroine a makeover (which he does) and for someone like me having a cute catboy pick out your clothes is a godsend! Sometimes he’s a bit self conscious, but he always does his best and honestly, he’s a little ray of sunshine… no complaints.

Catboy Fanservice… and I LOVE it!

So, while Nekopara Catboys Paradise is advertised as an “otome game” there really isn’t any romance in it, rather it’s about five hours of catboy filled fanservice… and I AM ABSOLUTELY HERE FOR IT! Far too often I have seen female characters used as fanservice and it’s about damn time there’s some featuring hot, cat eared boys (more please). While it may not be as sexualized as the Nekopara series proper, there’s plenty of sweet catboy eye candy to delight the eyes in this spin-off series. 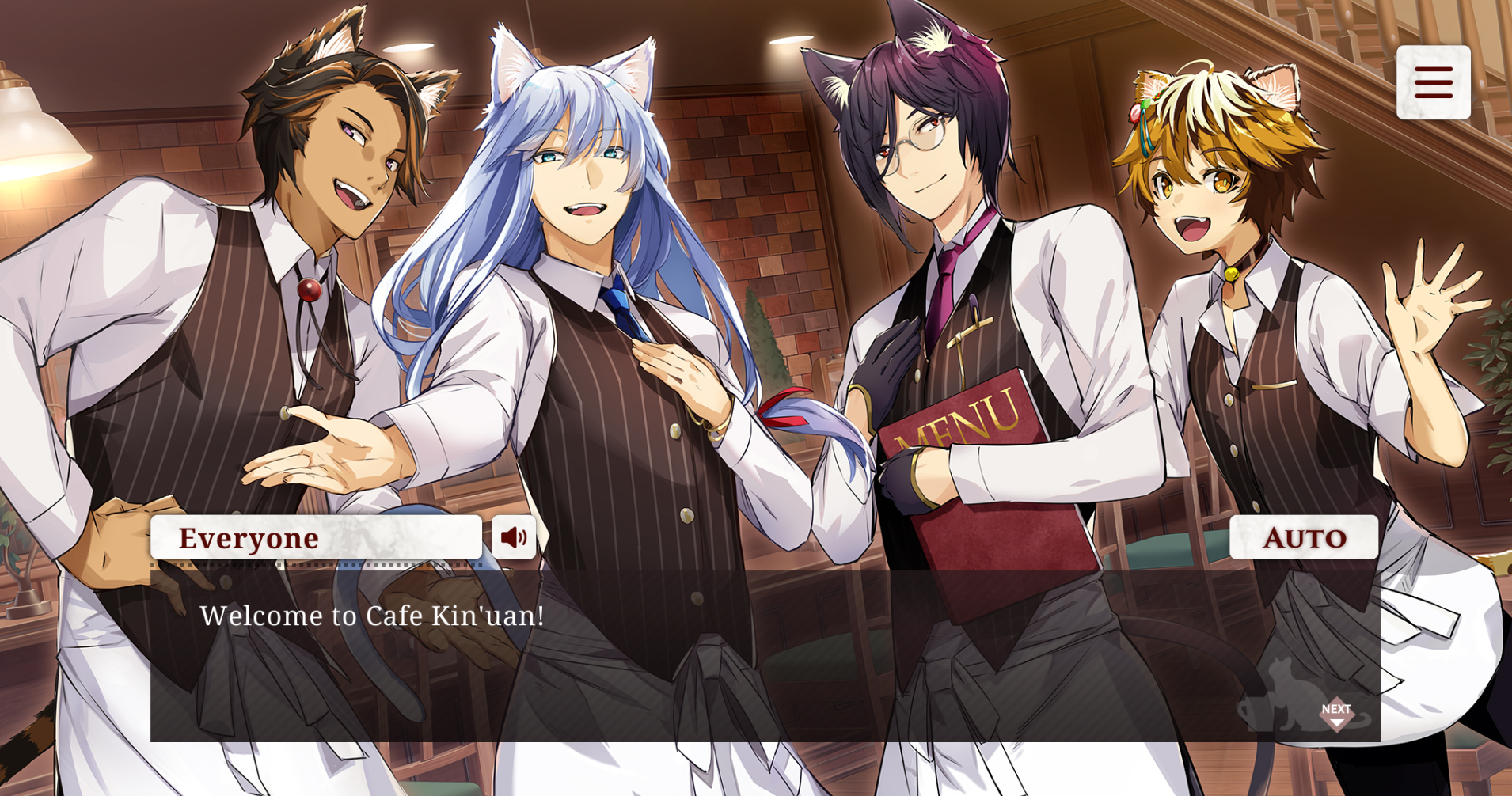 You inherit a café from your late grandfather (sound familiar) and since you’re not really the café manager type, a school for catboys sends over four trainees to help you get the business back up and running. The catboys are naturals when it comes to running a café and everything seems to be going pretty well… that is until they inform you that you’re expected to pick one of them to be your “house cat”—yes, you can become the brand new owner of one of these super mega foxy hot catboys. What’s the worst that can happen?

What follows is the catboy filled fantasy that I never wanted to end! There are four catboys to choose from: Laurier, Fennel, Sage, and Dill—and while each has their own story paths, Nekopara Catboys Paradise is a kinetic novel, so there are no in game choices. In fact the game feels more like a Drama CD, and with the all-star cast of VAs lending their voices to these purr-fect felines, players can just sit back and enjoy all the lovely vocal performances—a choice that was intentional on the part of the developers. Heck the bulk of the “prologue” even has a scene where each of the catboys give a detailed introduction that feels more like someone reading off a character bio/dating profile; this is not a complaint, knowing that my beloved, Fennel loves prosciutto and cream cheese pasta is definitely important information. Also don’t think it escaped me that they’re all named after cooking herbs… 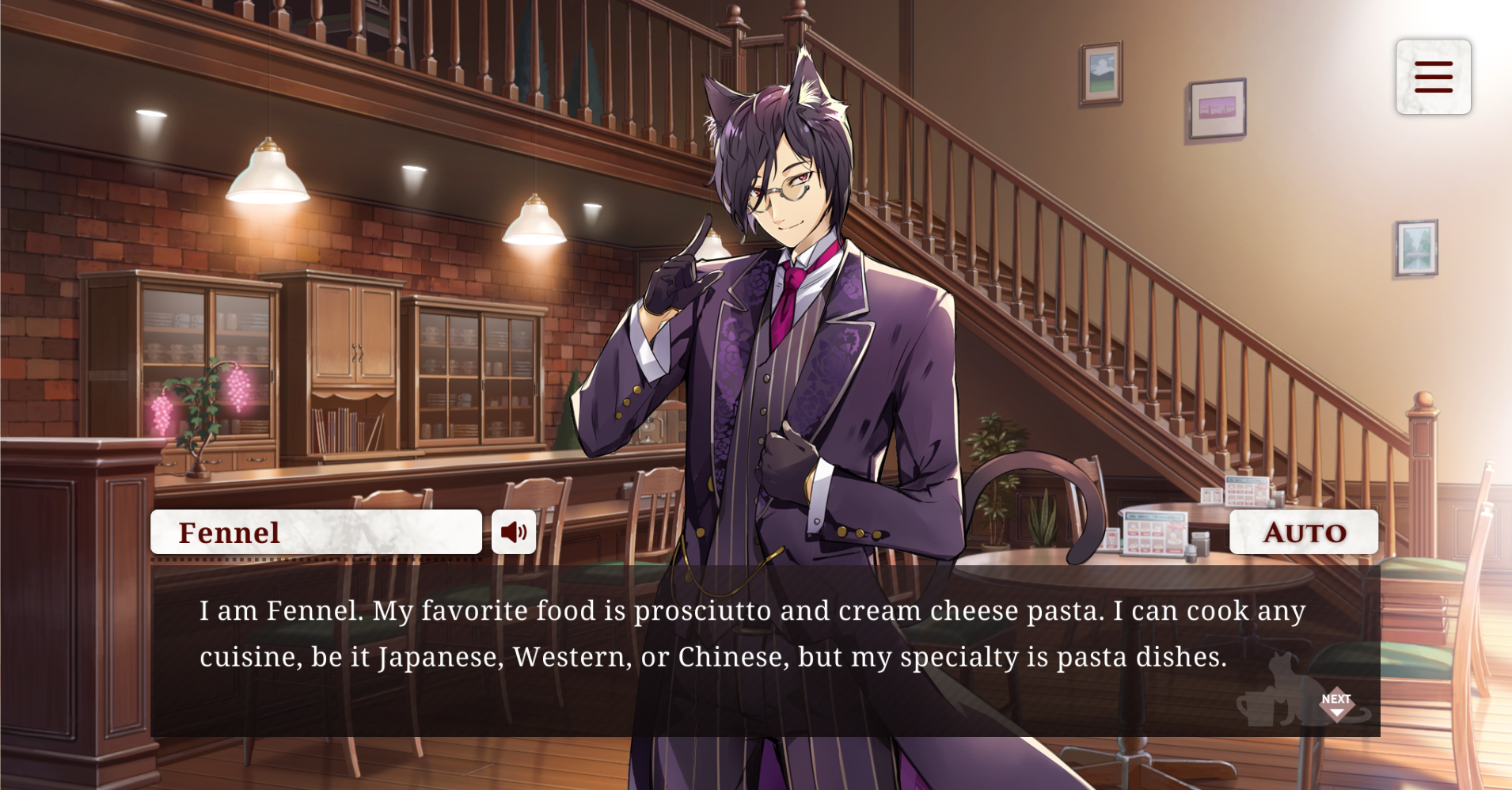 Discover the Catboy of Your Fantasies

The rest of the game is just getting to know the catboys, from their quirks to their likes and dislikes. The boys fulfill the usual character tropes and for a game like this I’m not looking for anything especially heavy or thought provoking—just cute catboys. Spending time with the catboys is fun and while they have the appearance of humanoid cats, they absolutely give in to their primal feline urges. The boys love a good head pat and one, I won’t say who legit licks the heroine’s face—purely platonic licking I assure you, gotta keep it PG. The most you’ll get is Laurier sneaking into your bed for some night time snuggles and the occasional catboy napping on your lap. It’s enough to get your heart thumping a bit faster, but it’s most definitely safe for work—though given how flustered the heroine gets, you can’t help but wonder if there’s something more to these “platonic” displays of affection.

Return of the Silent Otome Heroine

Speaking of the heroine, in Catboys Paradise, we see the return of the silent, self-insert otome heroine of ye olden times and while I have been critical of the choice before, it works here. Sure you catch a glimpse of her in some of the CGs, but no face reveals and the bulk of her dialogue is expressed through speech bubbles or the screen moving when she nods or shakes her head. I’ve seen the same technique used in the Dot Kareshi series and it’s a fun way to make it feel like you’re seeing things through the heroine’s eyes. There isn’t really any “romance” in Nekopara Catboys Paradise, in fact each route ends right when the heroine starts to catch feelings for her chosen catboy, which I’ll admit can be a bit disappointing if like me you were expecting more.

Art is Cute but Leaves Much to be Desired 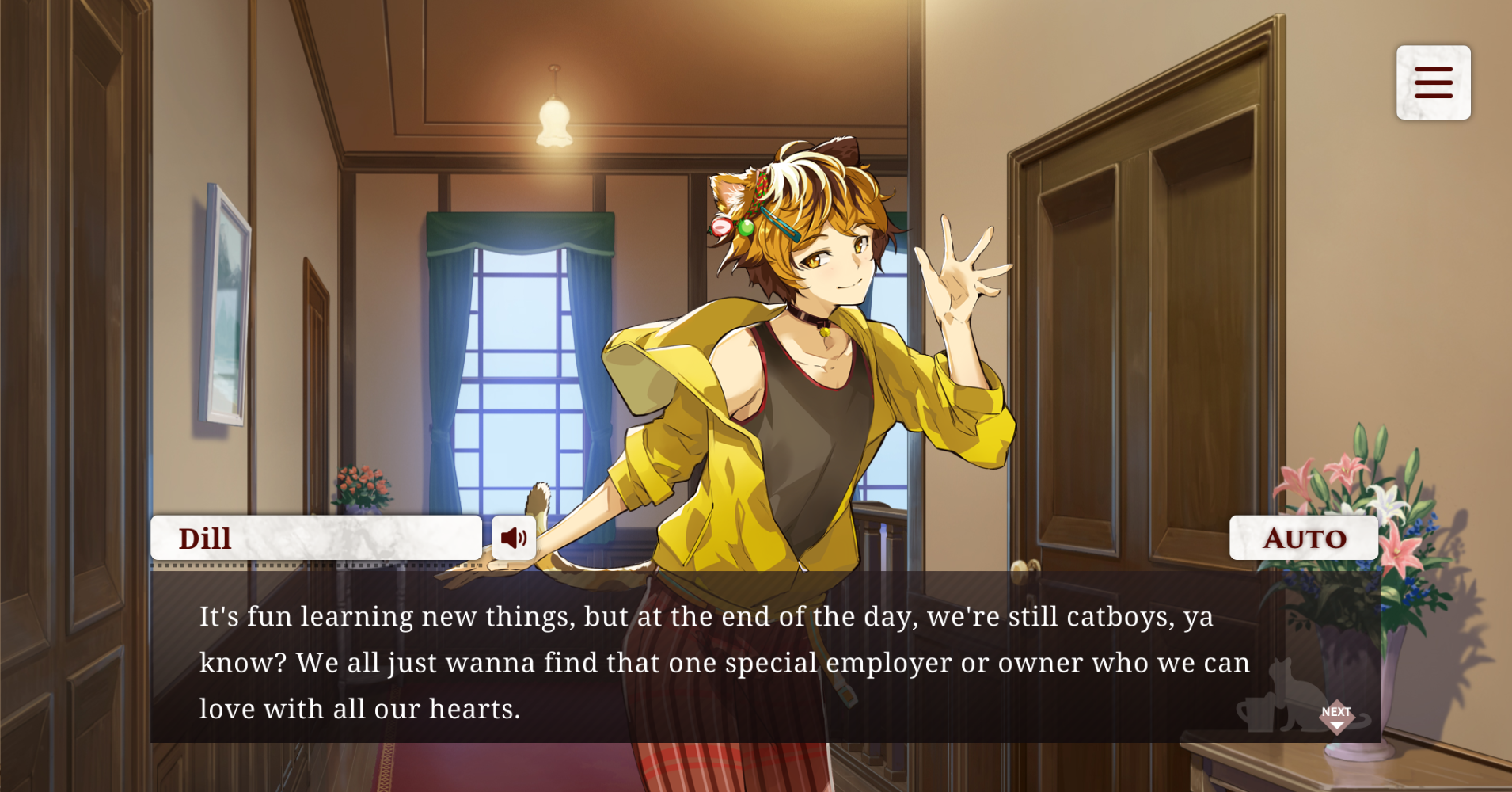 The art is gorgeous from the backgrounds to the sprites to the CGs, visually Nekopara Catboys Paradise is a feast for the eyes! The game does take some shortcuts, like the closeups on the cat ears moving has more of a cartoon-y style when compared to the style used for the sprites. While the sprites are pretty expressive, the game also uses emote-like speech bubbles. Also, and this is more of a nitpick, but I noticed the sprites get kinda blurry during close ups—it’s not awful, but I definitely noticed the difference when it happens.

The Verdict – Is Nekopara Catboy Paradise Worth Playing?

Nekopara Catboys Paradise is a cute and very lowkey experience that kind of feels more like a prologue to a much longer game, than a fully realized concept—and I hope that NekoWorks does give us more—if our collective thirst for catboys could manifest this spin-off, we can make a full series happen.

If you’re looking for a fun snack, full of cute catboys, definitely give this game a play, I mean it’s free and you really can’t go wrong with free catboy fanservice…