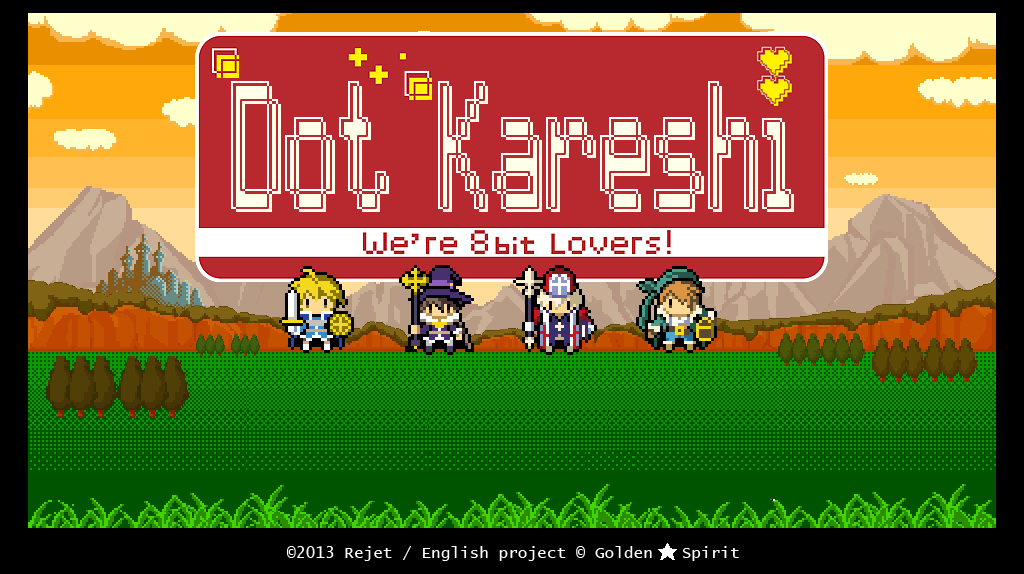 This is a fairly short game with a pretty simple premise: a high school girl is magically transported into the world of her favorite RPG, Ultimate Quest. But, because she just grinded her way through the game, the members of her in-game party hold some serious grudges against her. So, now that she’s stuck in their world they hold her accountable for her actions and demand that she help them complete a character specific quest as retribution… Each of the potential love interests are based on common RPG character classes; the Hero, the Wizard, the Priest, and the Thief, and each have their own distinct personalities… and that’s pretty much the gist of it…

Dot Kareshi- We’re 8bit Lovers is a really short game and most of the routes follow the same basic format, I think I blazed through the whole thing in about 2 1/2 hours. You (the MC) help your chosen love interest tackle a quest specific to their character class, like the Hero’s quest involves finding an ultimate sword of power whereas, the Thief’s quest involves stealing a priceless crown. The first route was fine, since everything was pretty fresh, but every subsequent route was just a lot of spamming the hell out of the skip button just to get through everything. So, I highly suggest playing the character you’re most interested in first to avoid burnout.

There aren’t much in the way of extra features, though you can listen to a few key phrases from the characters under the Extras tab and there is an in-game glossary but, that’s about it. Though I will say that the art in the game was really nice, which I kind of expected from Rejet. The character designs were fitting for the fantasy RPG setting, and I quite liked their elaborate costumes. The CG were pretty hit or miss, with a lot of closeups of the MC and her lover, but, for a game of this length there were a lot of CGs (four per route and one bonus CG after you finish the game).

The love interests were pretty hit or miss for me, on one hand they boast that they all have distinct personalities, unfortunately it’s clear from jump that they’re all just flirty perverts that want to get into the MC’s pants. The game explains this away by stating that the MC’s abuse during her first run through of the game warped their personalities, but… from what I’ve heard, Rejet is known for making their love interests a little on the pervy side. Thankfully, I started with  Wizard and he doesn’t have as much lewd dialogue. Though, the Priest was by far the worst offender, openly flirting with the MC and making more than a few suggestive comments about the MC’s body.

MC in this game is pretty much a throwaway character, following the silent protagonist trope to the letter, which is fitting given the fact that most RPG protagonists are “silent hero” types anyway. However, I will say that I like the creative way this was handled in the dialogue. Whenever the MC speaks, rather than actual words, her speech is depicted as a series of symbols and her in game sprites are just a series of emotion symbols that change depending on her mood. Since this is a visual novel, there are a few dialogue choices that steer the course of the dialogue, but, nothing that drastically changes the course of the story, save the endings.

Each love interest has three endings; a Good, Normal, and Common Ending. While, I’d love to say that these are distinctive to each route, that is not the case at all. The Good Endings all involve the MC escaping the game with her chosen love interest and living out her days in the real world with her beau. The Normal End has the MC staying in the game and learning to adjust to life as an 8bit character. And, in the Common Route, it’s hinted that she is at the disposal of her reverse harem forever. There really isn’t a Bad Ending in the traditional sense, but, the Common and Normal Ends are about as close as you can get since they involve the MC being forcibly kept inside the game by one or all of the guys.

All in all, Dot Kareshi – We’re 8bit Lovers – The Legendary Maiden is a short and cute game, there isn’t anything that will wow you here, but, it’s not a bad way to kill time. I’d liken it to a snack, it’s just enough to keep you entertained, buuut, nothing especially game changing. This is definitely a nice game for newbies looking for something simple to sink that teeth into, while more seasoned gamers will appreciate having a lighter game to play between heavier titles. But, for what it’s worth, The Legendary Maiden is a nice introduction to the Dot Kareshi series.