Pillow Fight adds a truly outrageous detective visual novel to their portfolio, big hair and even bigger cases will keep you captivated in Ghosts of Miami. I covered the demo back in the early stages of production and now that the full game is out, I just had to sit down and give this title a spin and it did not disappoint! Follow Chelo, an up and coming private investigator as she explores the beaches and back alleys of sunny Miami. Her stomping grounds, Dade County, is ground zero for the drug cartels and scores of undocumented immigrants all looking for a place to call home. With so much activity, it’s easy for a few lost souls to slip through the cracks… and when they do, you can count on Chelo to find the ghosts of Miami.

It’s no secret that I am a huge fan of detective/investigative games like the Ace Attorney franchise and Hotel Dusk (which you should totally go play), so Pillowfight’s detective-romance visual novel Ghosts of Miami was right up my alley. It takes the investigations and sleuthing of true detective games and marries it well with the player guided gameplay style of a visual novel while throwing in just a bit of romance for the otome crowd. However, there were times where I felt they played it a little too safe, never fully committing to either of its various story elements.

At its core, Ghosts of Miami is a detective game and it in that respect the game is fairly average, while the player can investigate cases and interrogate suspects/witnesses in each of the five cases, everything is done within the standard visual novel framework. While you can visit the various locations around Dade County, you can’t really interact with the environment, so there aren’t any crime scene investigations or prolonged clue hunting expeditions. The bulk of the investigations are conducted by interacting with the colorful cast of main and supporting characters around Miami. While this doesn’t necessarily take away from your enjoyment of the game, true fans of detective games will be left wanting since Ghosts of Miami only tackles half of the gameplay you’d expect. However, that doesn’t mean you won’t have a lot of fun solving the cases alongside Chelo, there are five missing persons cases to solve and each one is unique from the others.

The romance was a bit hit or miss, since successfully romancing the characters isn’t necessary for completing any of the cases. But, it does add a fun little side quest kind of feel to the game, and I definitely appreciated the diversity of the potential love interests. Not only are there are two male, one-non binary/gender fluid, and two female love interests, but, each one is from a different ethnic background.

There’s Lucianna “Luci” Escobar, Chelo’s longtime best friend and member of the infamous Escobar family; Janet a drag king who dons the Prince Charming persona on stage; Ethan an EMT at the local hospital and an absolute sweetheart; Richard, a suave older man who dabbles into some questionable business practices; and Tala, a high school groupie who is a huge fan of Chelo and her old high school band, the Tank Tops. The diverse cast is where Ghosts of Miami really shines, Pillowfight created a fully realized world full of well developed characters each with their own distinct personalities, motivations, and histories, but, none is more memorable than the game’s leading lady Consuelo “Chelo” Martinez. 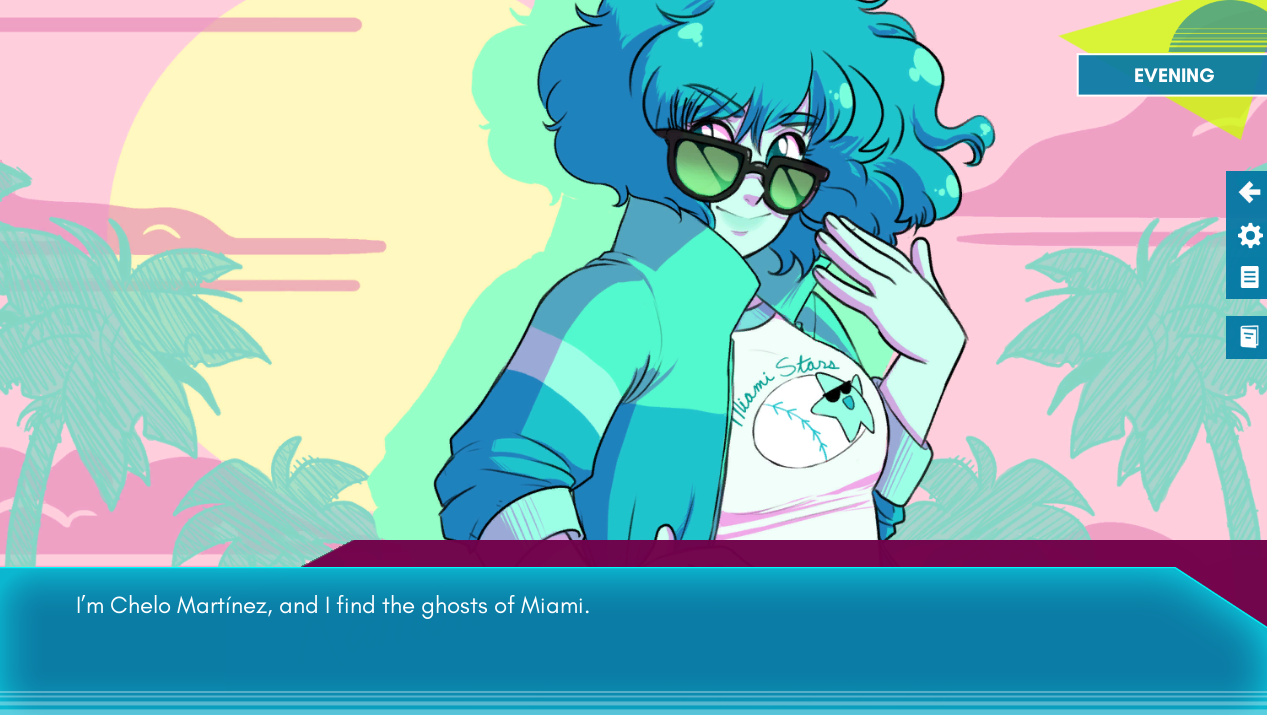 Protagonists can make or break a game, and Chelo is definitely one of Ghosts of Miami‘s strong points. Headstrong, vulnerable, flawed, and determined, Chelo is a young Cuban-American woman out to make a name for herself as a private investigator. While she isn’t perfect, her dedication to her cases and her friends is admirable. I saw a little of myself in Chelo; a young adult struggling to find their way in the world, balancing a personal life with work and family… romance. She is definitely one of the better visual novel heroines to come around in a long time.

But, you can’t talk about Ghosts of Miami without mentioning the unmistakably 80’s feel of the game. Ghosts of Miami is set in 1986 Miami and everything from the character designs to the bright neon colors screams 1980’s America. Big hair and even bigger crimes, all set to a synth heavy soundtrack contrasts with the darker tone of the game and some of the cases, but oddly enough it works. Beneath the glamorous sunny beaches and bright vibrant colors is a rather self aware and socially conscious game. Ghosts of Miami deals with a lot of complex themes that reflect the tumultuous time period in which it is set from drugs to immigration to LGBTQ Rights, this game leaves no stone left unturned. There was a remarkable amount of research put into bringing the world of the game to life. There are several references to real life events that only serves to immerse you in the world of Ghosts of Miami.

Ghosts of Miami is an homage to the 80’s with its distinctive aesthetic, bright vibrant colors dynamic character designs and cases that give off a bit of a Miami Vice feel, there is no doubt that this was meant to be a love letter to one of the most distinctive times in Americana.

While, the game is not without it’s flaws, Ghosts of Miami offers a rather enjoyable experience from start to finish. Fans of detective games will love the unique cases and overarching mystery, while romance/otome fans will love the diverse cast and dedication to inclusive romance options. All in all, there’s a lot going on at once in Ghosts of Miami and for the most part Pillowfight does a good job of balancing the various story elements and tying them together into a cohesive narrative.

But, you don’t have to take my word for it, check out the game’s trailer below and if you’re curious but not sure if you want to make the investment, check out the free demo!

You can also contact Pillow Fight and let them know what you think of the demo through the following Social Media channels:

2 thoughts on “Big Hair and Even Bigger Cases: Ghosts of Miami – Game Review”