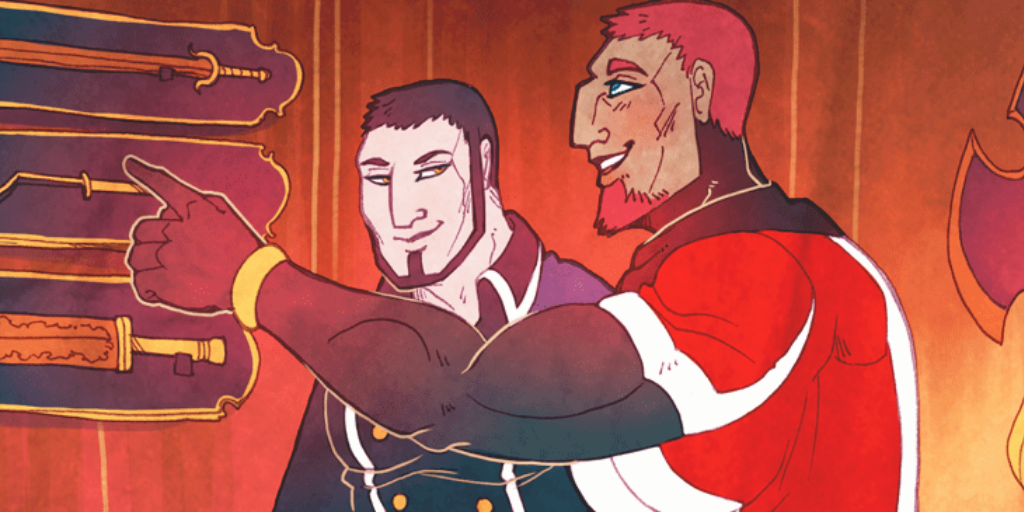 Hey Hey Heroes, Travelers, and Wandering NPCs, last year comic artist Aero Zero reached out to me about their poly positive fantasy bara comic, MEN+MONSTERS and I absolutely loved the gorgeous, vibrant art and unique premise. Well, Aero Zero hit me up again about another one of their Bara comics, Knights of Alanoc, a prequel to their action-adventure bara comic ACE OF BEASTS. I really enjoyed my first excursion into the MEN+MONSTERS/ACE OF BEASTS world, and I was excited to get my hand on this delightful standalone.

Summary: A ruthless lieutenant gives up on pursuing love… until a swordsman from a faraway land enters his life! Slow-burn romance SFW prequel to ACE OF BEASTS, with a NSFW epilogue.

Anyone that is familiar with Aero Zero’s works will recognize both Osric and Xerxes as main characters in their other long running series, ACE OF BEASTS. While this is a prequel series, you don’t need to have read BEASTS to understand what’s going on in KNIGHTS. However, this comic does provide some neat background on Osric and Xerxes and the origins of their relationship.

KNIGHTS OF ALANOC follows the exploits of Osric, a jaded lieutenant fresh off a recent break-up and Xerxes, a wandering swordsman who wants to train to become a knight. Though the pair are initially at odds, they soon strike up a friendship that quickly turns romantic. A slow-burn romance between two burly knights, unfolds against a beautiful fantasy backdrop. While this is a much more laid back Bara offering, the slow-burn romance and expressive characters make for a rather enjoyable read.

I am no stranger to Aero Zero’s works, having enjoyed both MEN+MONSTERS and ACE OF BEASTS, however, this prequel series is a whole different experience. Where those series where wholeheartedly NSFW, KNIGHTS OF ALANOC tones down the sexual content in favor of its ‘slow-burn romance’. Most of the bara titles I have read focus more on the sexual aspects of male/male relationships, so it’s refreshing to see a series that takes it’s time building up the relationships between its characters before delving into the physical side of the relationship. Fluffy, slow-burn romances are much more common in Boy’s Love (BL) media, like shounen-ai, which tend to emphasize romance, (ie. soft touches, cuddling, kissing) as opposed to the hot and heavy physicality of Bara media. And I will admit that it’s hard to imagine two big burly men involved in a late night cuddle session, but, that’s what’s so beautiful about Aero Zero’s works. They take your preconceived notions about Bara and turn them on their head, proving that big muscle bound hunks can be just as cute as bishounen, maybe even cuter.

Aero Zero’s gorgeous art seeming leaps off the page, each panel is bursting with color. Unlike MEN+MONSTERS which used a more diverse color palette, KNIGHTS OF ALANOC tends to stick with more blues and reds. This more restrictive coloring works well with the simpler storyline, since KNIGHTS is largely focused on it’s human characters, so there aren’t many otherworldly creatures or designs. Aero Zero’s art goes a long way in bringing these characters to life. Both Osric and Xerxes are well built muscular men, and yet they move with a fluidity you’d expect from characters with much smaller frames. They dance, they cuddle, they cry… Aero Zero does a phenomenal job of creating these expressive character and it goes a long way in giving the characters depth, Osric and Xerxes aren’t just knights, they’re people too. They have the same needs and wants as everyone else, and it’s a nice change of pace to see characters like these being vulnerable.

In fact the story is largely focused on Osric and Xerxes, with little in the way of side characters, making for a much more intimate narrative, this isn’t meant to be some grand epic, it’s just the story of these two men and the entire comic is framed within than narrative. This is their love story and it is downright beautiful. Of course, Aero Zero does include a NSFW epilogue at the end of the volume, and let me tell you, it is steamy! Osric and Xerxes are two very sensual characters and even though the main volume doesn’t feature any “adult” content, the sexual tension between the two men mounting as the story progresses (though I’m pretty sure they have sex early on, the main story just doesn’t depict it). So, the epilogue is like the final payoff for all that tension and it is just as satisfying as you’d expect! 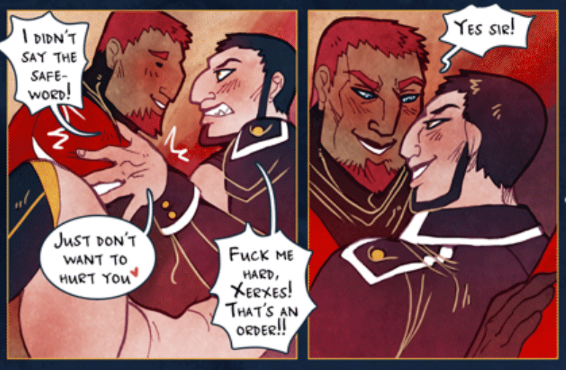 After a day of training, Osric and Xerxes decide to let off some steam, and the results are nosebleed inducing. There is a raw, carnal feel to the sex scene with both men unleashing the full force of their passions on one another, but there’s also a gentleness to it as well. There is one scene in particular that stands out, Xerxes has just entered Osric and because of his girth penetrates a bit deeper than he intended. Rather than continuing, he stops, asks Osric if it’s too much and waits for Osric’s okay before continuing initiating sex. It’s this small detail that goes a long way in making Aero Zero’s works stand out from the rest. It’s not just mindless sex, it’s the next step in a relationship Aero Zero has spent time fleshing out between two consenting adults and I for one appreciate the care the author takes in bringing that to light.

So, the final verdict: This isn’t my first foray into the world of Aero Zero’s works and it won’t be my last! KNIGHTS OF ALANOC is the perfect introductory Bara comic, it’s light, it’s fun and it eases you into the epic world Aero Zero has spent years creating. If the gorgeous artwork doesn’t draw you in, with it’s bright colors and bold panels, then the expressive and organic characters will definitely do the trick. Aero Zero takes time fleshing out the characters and their relationship, taking you on a journey that will leave you both satisfied and hoping for more stories featuring these amazing characters! Of course, their story does continue in ACE OF BEASTS, but as a standalone prequel KNIGHTS OF ALANOC is more than enough to whet the appetite.

As always, please check out the series for yourself and any of Aero Zero’s other wonderful works!