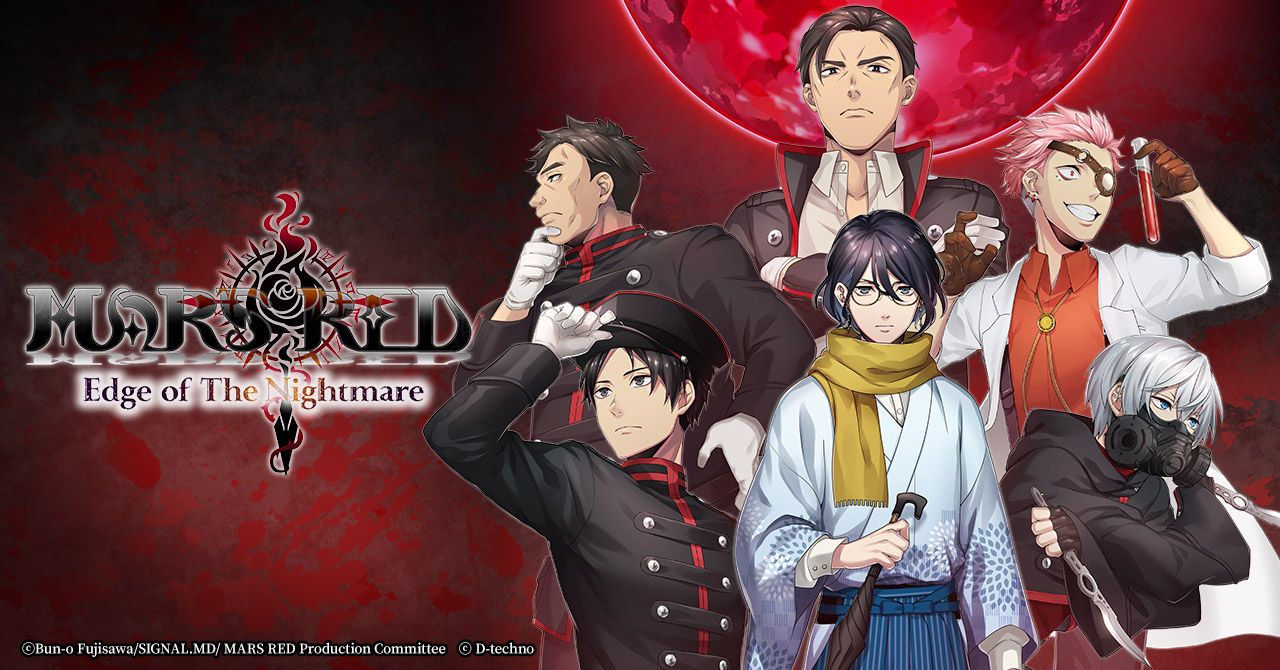 MARS RED is a multimedia collaboration between Bun-O Fujisawa and mobile game publisher, Favary Inc. and entertainment company D-Techno. First conceived as a Japanese stage reading play in 2015, the Taisho era vampire series was adapted into a manga series in 2020 and an anime series earlier this year. The series follows top secret vampire military team known as Code Zero as they eliminate vampire threats in 1920’s Japan. The mobile game, MARS RED: Edge of the Nightmare features an all new story created by Bun-O Fujisawa and follows a brand new character created for the game—Yatsufusa Yuki, a newly created vampire who crosses paths with the members of Code Zero.

Early twentieth century, Japan – the flowering era of Taisho influenced by Romanticism. As the nation prospered in modernization, some species were outcasted and stood at the crossroads of their lives.

Although they possessed superhuman physical abilities, they would burn under the sun and only lived off of blood. They suffered from having keen senses, and most of them could not adjust to their eternal life. Thus – they were vulnerable species.

This is a story about a young man named Yatsufusa, who became a vampire against his will and seeks the meaning of life as he encounters different people and species surrounding him.

Newly turned vampire, Yatsufusa Yuki is discovered in an abandoned warehouse by the Code Zero team. During his human life, Yatsufusa was a disappointment to his family and his unfortunate circumstances are just the cherry on top of an otherwise unremarkable life. Yatsufusa isn’t charmed by his new life as an immortal bloodsucker and begs the team to put him out of his misery, a request that they refuse. Instead the team takes him to Tenman-ya, an inn that caters to vampires (and humans during the day) by helping them find work and giving them a steady stream of donated blood to sustain themselves. Still uneasy about the situation, Yatsufusa reluctantly decides to give his new vampire life a go and stays at Tenman-ya, where he learns more about the vampire world and his own supernatural abilities. Soon Yatsufusa finds himself drawn into the various missions of Code Zero, helping them investigate vampire related conflicts throughout the city.

Like us, Yatsufusa is unfamiliar with the vampire world and a lot of his interactions with other characters (especially the Code Zero team) feel more like a crash course in vampire lore—and I appreciate those moments because the vamps in MARS RED have their own unique vibe. Sure they borrow elements from existing lore, like drinking blood and having to avoid sunlight, but there are subtle differences thrown in to spice things up. There’s a ranking system for the vampires in the game that corresponds with the types of abilities they have, that sets them apart from one another. Yatsufusa and Suwa are C Rank vampires which means they have enhancements that improved hearing and speed, while an unranked vamp like Yamagami is practically on par with a human.

Throughout the course of the story we learn more about the world and each of the characters and that’s really where the game shines. Bits and pieces of each of the character’s histories are explored, delving into the unique lives of vampires living within the Imperial Capital. Some characters like Yatsufusa aren’t exactly charmed with their eternal existence, while others like Takeuchi are thriving now that they’ve become vampires. As far as protagonists go, Yatsufusa is alright, he’s actively engaged in the events of the story and it is through him that we learn about the world of the game and vampire lore. Though, I will admit early on he can be a bit of a Debbie downer, as he spends the bulk of his early screen time begging for someone to kill him and put him out of his misery which can be a bit… off putting. But, I like the other characters well enough, especially Takeuchi (I kind of have a thing for eccentric mad scientist types) and Kurusu.

For the most part the MARS RED has a lot in common with a visual novel—players follow Yatsufusa through his new undead life, exploring the city, solving cases, and interacting with various vampire and human characters. But there’s also a more interactive component that is more in keeping with the usual free to play mobile style. The story is broken up into chapters that are unlocked with tickets, but you get a fair amount of free tickets to cover a good amount of the story without having to spend money on extra tickets. Also a fun Investigation feature where throughout the game players will interrogate witnesses/suspects, explore various locations collecting clues, and perform actions that guide the course of your story.  It’s very reminiscent of the Ace Attorney series and adds a level of interactivity to the story that makes for a much more immersive experience. Some of the cases are pretty challenging and not gonna lie, there were a few times when I got tripped up during the Infer  phase where you can present your “evidence” and finally get to the bottom of your current mystery. There’s also an Explore feature, where players can pick two characters to go on what I like to call “mini adventures” around town exploring a specific location to unlock additional side stories and character interactions. The longer you explore the more rewards you earn, anything from coins that can be used to buy items to story points.

I’m usually not big on freemium gameplay mechanics, but MARS RED isn’t as intense as some of the other mobile games I’ve played, which is a plus. And the story and characters were definitely interesting enough to keep me reading, however I will admit that the translation, while good had some lines that felt a bit rigid. There were a handful of typos and grammatical errors, which weren’t enough to completely put me off the game, buuut they were enough to warrant a second read-over of a line. On the flipside, the art is absolutely gorgeous! The story is set in the Taisho era so there is a blend of more traditional Japanese clothing, the more rigid military wear, and western styled clothing. There’s a steampunk vibe to MARS RED that carries over to aesthetic of the games’s menus and overall design (lots of gears and metalwork).

Final Verdict on MARS RED: Edge of the Nightmare

I tend to like a bit more substance with my visual novels and MARS RED: Edge of the Nightmare more than delivers! A Taisho era vampire adventure, that is surprisingly human in it’s depiction of it’s supernatural cast. Each character has their own unique story to tell and while you work your way through the various mysteries and cases, you discover so much more about the cast and the rich fantasy world they inhabit. I wasn’t sure what to expect with MARS RED, but I can honestly say this is a one of a kind experience!

Thank You Favary Inc. for giving me early access to the game!

2 thoughts on “MARS RED: Edge of the Nightmare Game Review”