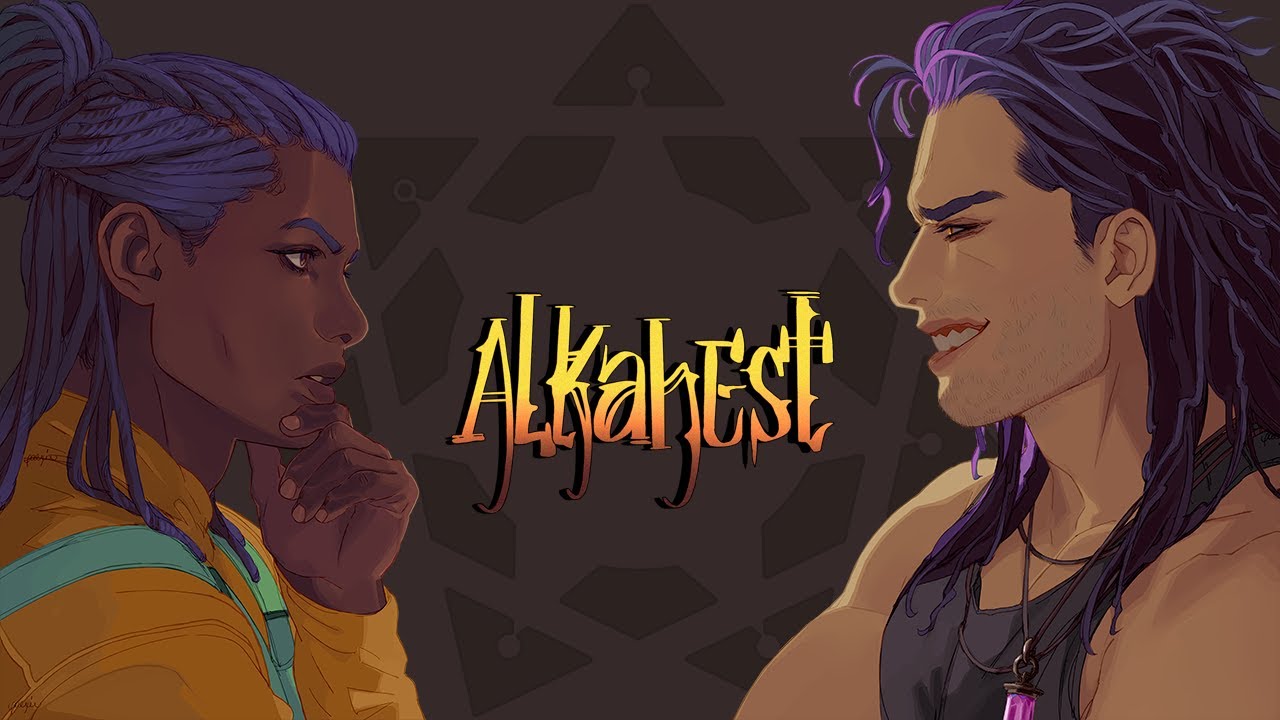 For Mello Kurosol, disaster is always one bad customer away.

Engage your friend in conversation to unwind the mystery of his capture, and brew your way out of a dire hostage situation before your alchemy lab becomes your tomb.

Alkahest is an 18+ thriller visual novel about pushing your limits to gain freedom. Taking place over a single night, this conversation between two categories of criminal explores themes of corruption, religion, and justice through an outsider’s lens.

While Alkahest is casually inclusive of diverse ethnicities and sexualities, this game does not follow a hero’s journey and is not suitable for young players. Content warnings are detailed below.

Alkahest is a bit different from the games I usually cover here, combining the gritty tone and storytelling of the steampunk and even, cyberpunk genres and applies it to the heroic fantasy world in an all new (or at least to me) narrative genre, dungeon-punk. Now, I won’t pretend that I know much of anything about the genre or it’s attributes, but I am not one to turn down a visual novel with immersive world-building and intimate character relationships, and Alkahest has that in spades—giving players a peek into a corrupt world where theocracy reigns supreme, magic is innate to all but controlled by the ruling few, and the shadow market breeds opportunity for those who seek it. At times the story feels more like a battle of wits, as alchemist, Mello Kurosol is trapped in a dangerous (and deadly) cat in mouse game with a malicious entity currently possessing the body of their acquaintance, Logan. Desperate to free their friend, Mello must brew four deadly potions for the entity before the end of the evening—a choice which could prove deadly for not just Mello and Logan, but others as well. 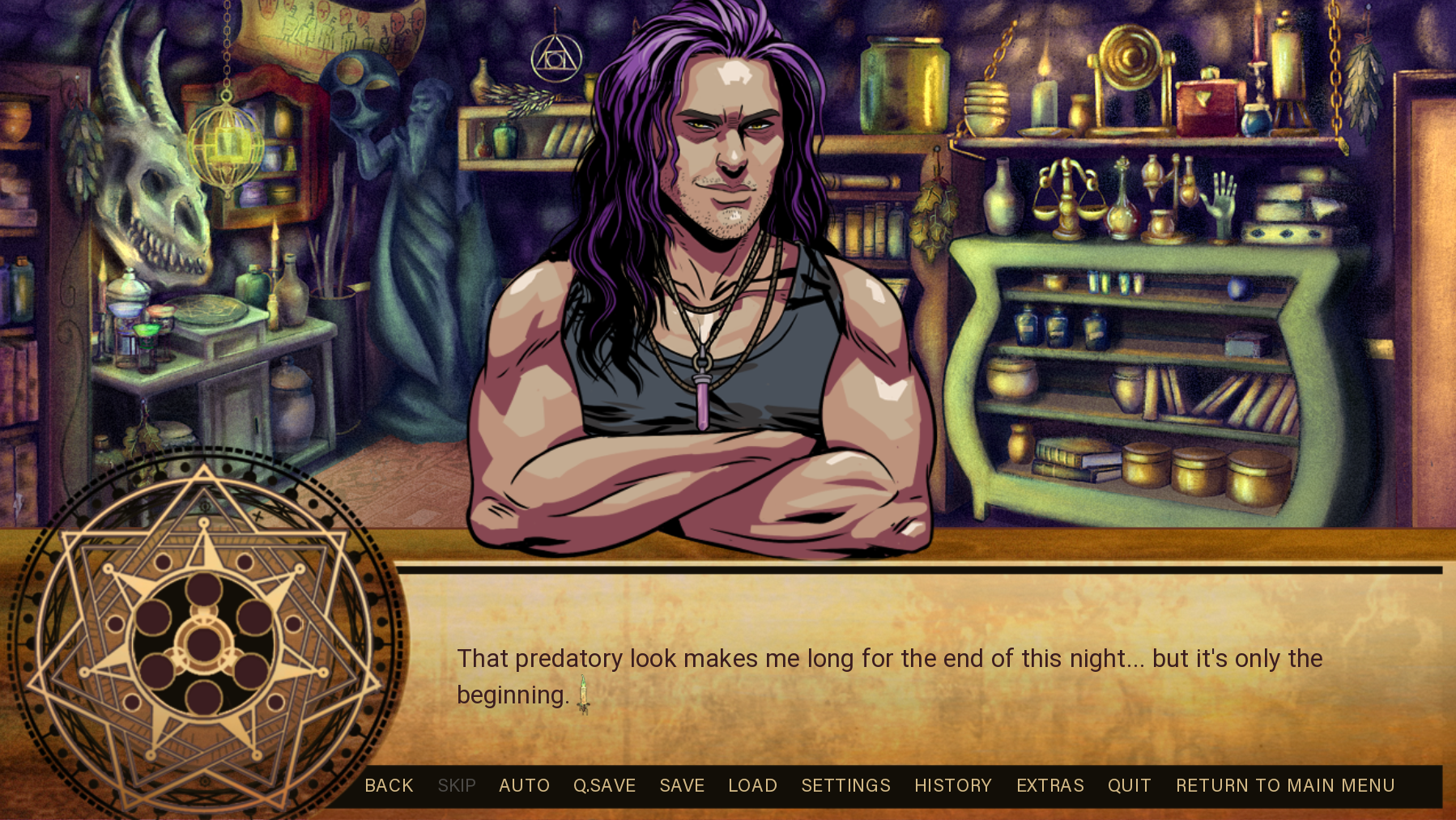 The thumping baseline and swelling instrumentals of the music and not-Logan’s intense never wavering stare give the story a palpable sense of tension—each click of the mouse bringing the reader and Mello closer to the inevitable, in this high stakes hostage negotiation. Whether you choose to brew the potions or not someone will suffer the consequences. Taking place in a single evening in the confines of an underground spell chamber, Mello can engage in conversation with their enigmatic captor, who seems to know quite a bit about you and Logan—secrets no one else should know. The dynamic between Mello and not-Logan is fun, at first there is a clear power imbalance (not-Logan literally take you out at the drop of a dime), but as the story progresses, there is an unmistakable chemistry between the two leads that toes the line between belligerent sexual tension and genuine respect.

Over the course of the story delve into the social and political hierarchy of the world—corrupt officials who regulate the use of magic, power struggles between districts, and more are explored through conversations between Mello and not-Logan. While the game mostly follows the back and forth between Mello and not-Logan, through their conversations you learn more about six diverse characters, who each add a unique (and often clashing) perspectives. This is an entire society built on magic, I am a sucker for good world-building and with a world as rich and vast as Lore City, I admit that I really REALLY want to know more about it. I NEED more.

Magic and alchemy play a big role in the game, and players are tasked with brewing potions by choosing ingredients. If you brew the potions correctly you live to fight another day, but you’re also bringing someone else that much closer to their own demise—a moral dilemma that is the life’s blood of Alkahest‘s story. The alchemy mechanic is fun and if you pay attention during the convos you’ll get hints on which ingredients to use for which potions; the first time through I did not and that led to a LOT of failed potions and death. Yes, that’s right you can and will die in this game. There are six endings to unlock and it is the combination of brewing the correct (or incorrect) potions and in-game choices that determine whether you, Logan or others will live through the night.  The choices are interesting running the gambit from placating and submissive to outright defiant—each option with their own benefits and setbacks. I had a lot of fun riling not-Logan up, buuuut that did earn me some of the more violent consequences. 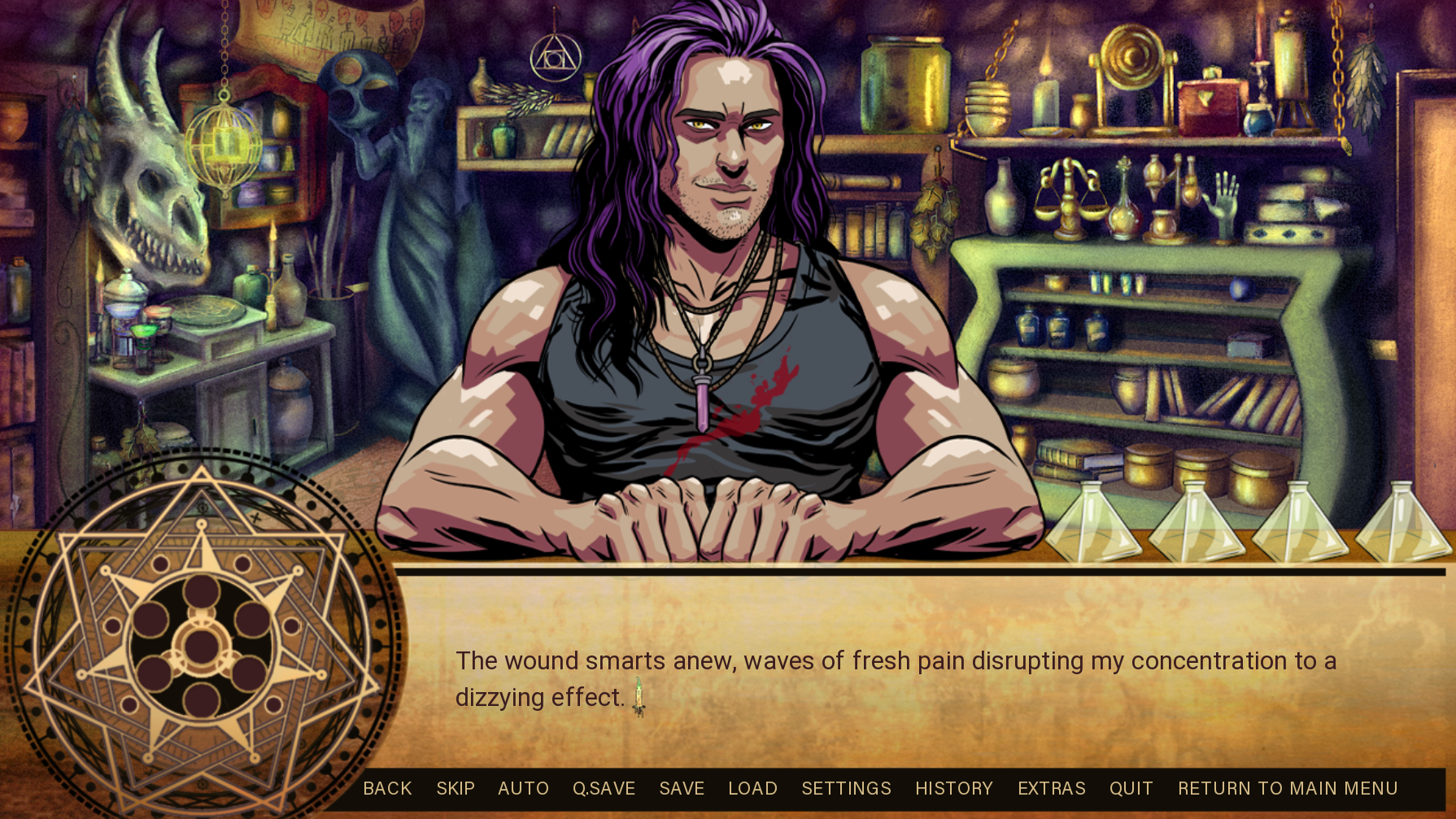 Alkahest is a game that hooks you early on with the high stakes premise, but you stay for the immersive worldbuilding and the phenomenal chemistry between the main characters. Some of the more technical terms went over my head (I’m not as well versed in heroic fantasy or alchemy for that matter), but as the story progresses and more is revealed about the world, the more things start to make sense. This is a game that left me craving more from this world and characters, there is so much that could be explored and six hours is not enough!

Interview with the ValiDate Team