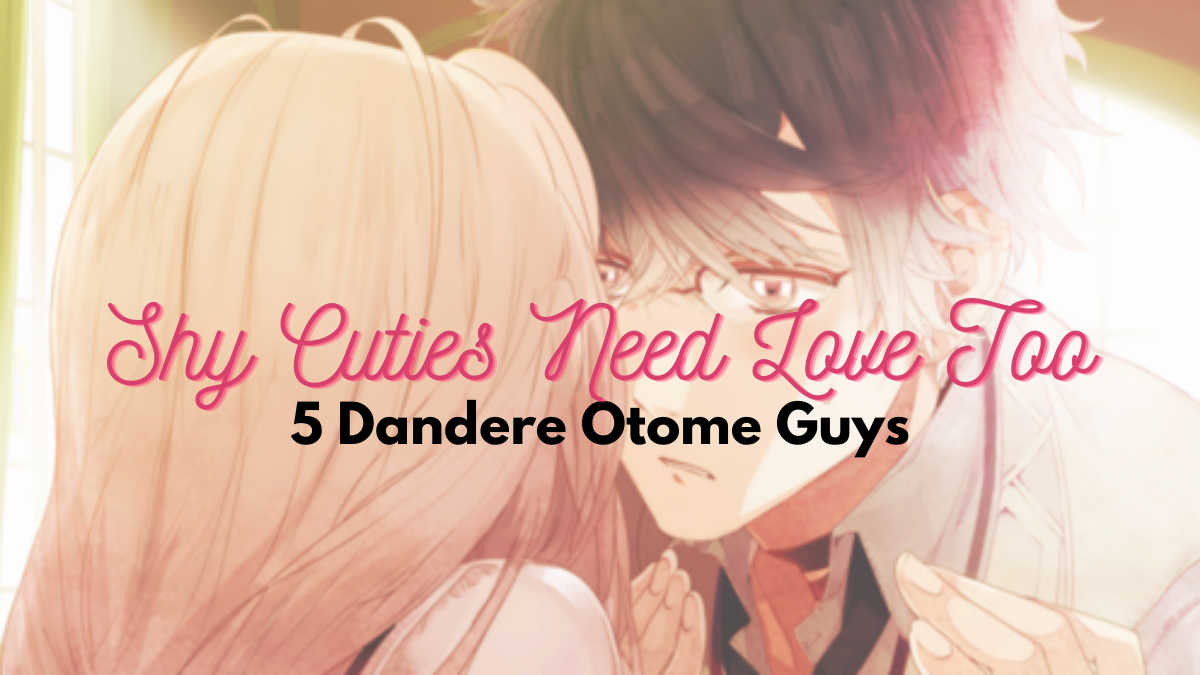 If you’re just joining the party, this is the fifth post in my Character Archetype series, where I spotlight five otome LIs from each of the major character archetypes. These posts are a complement to my Beginners Guide to Otome Games posts, particularly the one on Common Character Archetypes in Otome Games. There I give a very general rundown of the most common character archetypes that appear in otome games with a few examples of characters that fit each trope.

I know it’s been about a year since my last archetype post (my bad), last time around I covered one of my favorite character archetypes, Kuudere characters. Which you can check out by clicking the link: ‘A Little Tough Love: 5 Kuudere Otome Guys’. This time around I’m covering the cute and shy dandere character types!

The Basics: What Are Dandere? 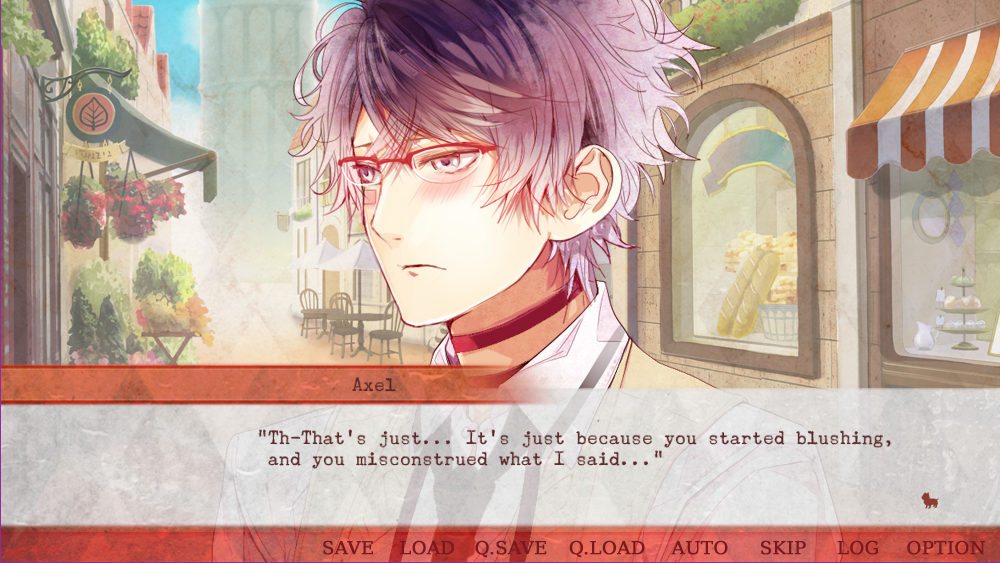 The big take away from dandere characters is that their aloofness stems from their shyness. They are typically, very slow to open up to people, especially strangers and it can take quite some time for a dandere to warm up to a heroine. Dandere are often described as being gloomy and may have a low self-esteem. 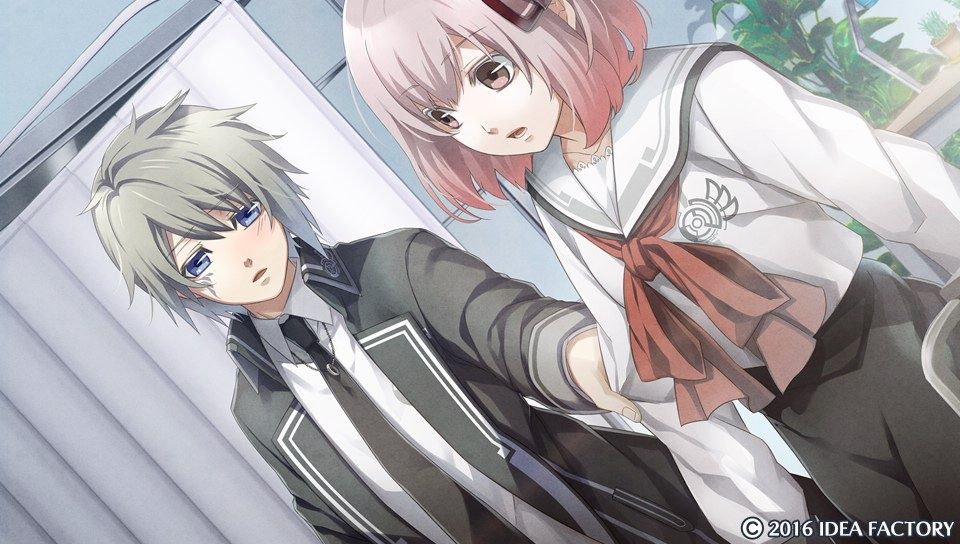 When I think of a classic dandere characters my go to is always Senri from Norn9 Var Commons. He’s pessimistic and gloomy and just all around an unpleasant person to be around and generally prefers the peace and solitude of his room. When he does interact with others, he is extremely antisocial and distrustful of those around him—and it’s only after Kakeru destroys the door to his room that he is forced to hang out with the rest of the passengers on the Norn, including Koharu. He doesn’t have a lot of experience with girls, so he finds Koharu’s constant attempts to engage him both frustrating and he’s often seen blushing when she does anything especially sweet.

I will fully admit that Senri was a bit hard to place since he does have a lot of kuudere-esque tendencies—he’s a cold shut-in who wants nothing more than to be left alone—but ultimately his aversion to people and general awkwardness felt more in line with a dandere.

Before I start this review I have a confession to make, I didn’t buy this game when it first came out…

Meoshi is practically baby’s first dandere—he is an antisocial neet who gets flustered at just about anything and when he does speak it’s mostly incoherent whispered muttering. When ever he has to work with the rest of the group on a task, he breaks out in a cold sweat and does his damndest to escape the room—usually resulting in him having to be forcibly dragged back. Meoshi is an avid gamer and is well known online as the player Ares, who dominates most fighting game tournaments, and as a result he has amazing reflexes which comes in handy as the group works through Hogstein’s traps. He can be a bit of a defeatist, which definitely brings down group morale during some of the more intense moments of the game and his lack of physical strength makes him more of a liability than an asset.

It takes him a while to warm up to the others and even then he still gets flustered when having to voice his opinions, though he does get more confident as the story progresses. Meoshi is really smart and more often than not has really good ideas, he just lacks the confidence to speak up for himself.

Mini Review: Sweet Fuse-At Your Side

While it is billed as an otoge, Sweet Fuse plays more like a adventure, puzzle visual novel than your typical romance visual novel…

I will try to keep this as spoiler free as possible, because Nageki’s route is a bit of a doozy and that says a lot considering how wild of a game Hatoful Boyfriend is in the first place.

So, Nageki is a mourning dove and one of the first year students at St. Pigeonation’s, he is very quiet and can often be found in the library reading a book. He prefers being left alone over spending time with others and gives off a rather gloomy vibe when approached. Usually he doesn’t talk much, but when bothered he can get pretty incensed, especially if there’s someone disturbing the sanctity of the library. He doesn’t really have any friends.

I love me a blushing boy in glass~ Ritsu is a third year high school student and a member of the Calligraphy club. While he’s technically a year older than the MC in the game, he’s a bit on the shy side and prefers to keep to himself—you can usually find him in the library or in the cafeteria snacking on his fave, matcha pudding. He is terrified of bugs, nearly jumping out of his skin at the sight of a dead cicada. Ritsu is easily flustered and quickly becomes a blushing sputtering mess when embarrassed (which happens often).

When he finally works up the courage to confess to the MC he actually cries, the poor dear is just too pure for this world. He must be protected at all cost~

I Love You! (好きだ！, Suki da!) is an indie otome game created by Shinogi Shiohara and localized in English by Moonchime Studios…

The emotions from this route are still pretty raw, TOA DESERVED BETTER!! His true ending broke my heart into a million pieces and I am still not okay. Toa is a cat loving otaku who has a hard time interacting with other people. He is very soft spoken and shy, and he avoids eye contact with people when he talks to them. Toa is a bit of a klutz and when we first meet him in the game, it’s after he trips over his own  two feet. He gets winded fairly easily and he is extremely nearsighted, so he has to wear super thick glasses. Despite the summer heat, he wears a thick padded kimono, because it makes him feel safe.

Originally this was a part of the main review, but the more I kept writing the more my thoughts on the characters kind of took on a life of their own…

What I “Hate” About Dandere

I can’t say that Dandere characters are my favorite of the archetypes, but they do have a lot of good points—they are super cute when they’re blushy and flustered. Having to work to break down their defenses and getting them to warm up to you requires a special degree of patience and dedication. But, once you successfully get a dandere to open up to you, they are extremely loyal and you’ll be surprised that some of them can be pretty adept at teasing~