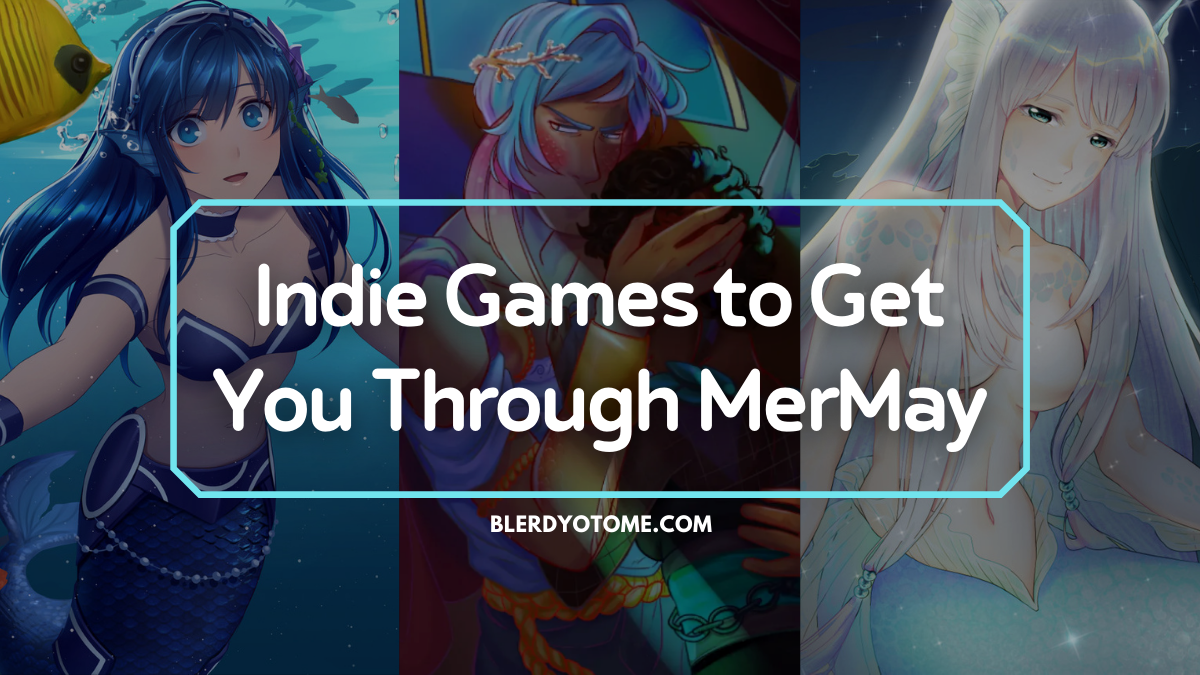 Hey Blerdy Tribe, it’s Mer-May and I don’t know about you all, but my social media feeds have been flooded with wave after wave  of amazing mermaid themed content! From cosplays to artwork to short stories, folks have us all covered with mermaid goodness~ So, I wanted to join in the fun by sharing some of my fave games featuring merfolk—that includes Sirens, mermaids, and everything in between—so get ready to dive in to these amazing indie titles that are sure to keep you busy through Mer-May and beyond!

A Pinch of Magic

Varsha is a young witch who has just graduated high school. While their friends were off jet setting and travelling around the world, Varsha had to go back to their hometown Lynnsdale to take care of their grandparents who ran a small magic store. There were two major issues though: one, magic is strictly banned and two, their grandparents store is on the verge of bankruptcy.

Play as Varsha as you try to revive your grandparent’s store, avoid scrutiny by the authorities, and find love—all in one summer.

-A Pinch of Magic Official Synopsis

This is the second Crystal Game Works title to feature a mer-person—their 2019 Otome Jam visual novel, Memories on the Shoreline has a male siren love interest—buuuut, that game is a bit of a mixed bag. So, for this list I went with their Nanoreno 2021 release, A Pinch of Magic, where you play as a young witch who can romance their absolutely gorgeous mermaid princess bestie! Kiana is stunning, both in her memaid form and in her human form. She has this cute quirk where she mixes up words and her relationship with the main character is just so wholesome and sweet. Kiana is also extremely protective of the environment, and her route she is working on a campaign to stop people from dumping waste in the ocean.

Nova never thought she would return to Stonewater after her grandmother passed away three years ago– but when she inherits the home she spent her summers in as a child, she finds herself returning to the small beach town.

Mysteries abound when she receives a package containing four intricately carved frosted glass spheres and a letter from her grandmother telling her to break open her happiness.

She didn’t understand at first…

But everything changed when she fell into the ocean.

So this pick is technically still in production, but I played the demo a few months back and I fell in love with just about everything! Not only is the heroine a Black woman, but she’s also a successful career woman AND she has the chance to romance three gorgeous melanin Sea Kings! Each King rules over their own kingdom, each with their own unique customs and histories—learn more about your chose partner and their people, while exploring a richly diverse underwater world!

“Is there a true path to happiness?”

Abruptly finding herself at the bottom of a snake pit, an impoverished girl named Linh is bound and helpless for a crime she did not commit. Left to the mercy of the village snake god, a mysterious entity appears before her, offering to save her in exchange for her soul.

Finding herself in a new reality, she is torn between staying with the beautiful temptress, Ai, who had rescued her from death, and the resourceful wanderer, Jinhai, who promises to set her free.

Who is the real savior? Will Linh discover the strength to change her own fate? Journey with Linh as she is forced to question her understanding of life, happiness, and what it means to be human. Each decision matters in this tale about identity, friendship, love and loss.

Technically Ai isn’t a mermaid, rather a shapeshifting serpent goddess, but she does have a mermaid form and as you can see it is GORGEOUS! Ai has more than earned her title as a beautiful temptress, with her striking looks and years of experience learning about human cultures, she is the embodiment of beauty and brains. She can be a bit apathetic at times, but when she cares for someone she never strays and her love of delicious meat dishes is something I can definitely relate to.

It’s one month before the famous Passion Festival and CiCi the mermaid needs your help!
One of CiCi’s dreams has been to enter into the Passion Festival, but she always lacked the focus to choose her favorite hobby to showcase!
It’s up to you to help CiCi hone her skills– and maybe even find love?! Let’s splash!

What can I say? I’m weak to cute mermaids and Mermaid Splash has not one but five absolutely adorable mer-ladies to love! Each character in the game shares characteristics with a different sea creature from a passionate fangirl anglerfish to a gardening obsessed shark to a martial arts enthusiast cuttlefish! Mermaid Splash will more than fulfill your Mer-May cravings~

Sacrificed to the sea, Gabrielle Freedmen awakens in an Atlantean prison for the damned. Prince Nauticus V, Crown Prince of Atlas and his royal guard Zeppelin inform her they are being imprisoned against their will. They hatch a plan to travel to the depths of the prison in order to confront a witch. The Witch hordes a precious stone that can stop an impending civil war. Will they all make it out alive?

Looking for something with a bit more action this Mer-May? Check out Ultramarine, a seapunk adventure VN developed by Seven Submarines for Nanoreno 2018! This game has it all political intrigue, dangerous quests, and hot mermen—what’s not to love? Work with the king of Atlantis and his guard to find a special stone that will stop an impending war between the Atlanean people and humans. Take down monsters and enemies you encounter along the way with an inventive RPG style battle mechanic, but be careful your choices can mean the difference between life and death for you and your companions.

Learn about the people who inhabit this town as they grow to overcome emotional struggles in their respective routes!

This story is about a gondolier boy who gives part-time tours to pay for his mother’s hospital bills.

However, he’s forced to work under another identity after failing to live up to everyone’s expectations in the past. As he lives out his double life, he meets others who are willing to help out, but they might also be carrying secrets of their own.

I recently discovered Aquadine, but I’m glad I did because this game is an emotional ride from start to finish! Take on the role of a gondalier working to help support his ailing mother. In his work he encounters a number of people, each with their own troubles and secrets… one of whom is secretly a mermaid! Learn more about her and the rest of the cast as you navigate each of the game’s unique character paths—however, Aquadine is a kinetic novel, so there are no choices, but each path is a one of a kind experience!

Dive into the 1950s and explore an eldritch-horror-infested world soaked in dark magic, mystery, and romance. Call Me Under takes place in the mysterious underwater city of Styx, a haven inhabited by humans, sirens, and a host of unknown otherworldly entities.

Play as a choice of two different faceless protagonists from The Surface seeking to leave their past behind and start fresh in a new city, even if it is one only rumored to exist at the bottom of the ocean. They do say there’s nothing like a clean slate…

But maybe not if you find yourself thrown into the middle of a brewing fight between the Shadows and the Light; two ancient, otherworldly entities embroiled in a centuries-long battle for power.

-Call Me Under Official Synopsis

Last, but certainly not least is Call Me Under by Lunaris Game! Like Ocean Pearls this game is still in production, but the team did release an extended demo a few months back that is well worth playing! Take a sneak peek into the underwater city of Styx, a place inhabited by humans, sirens,, and an other beings that go bump in the night! One of the love interests, Adrien is an artist and one of the city’s many Siren residents—while they’re initially a bit on the shy side once they get to know you, they’re in it for the long haul!

2 thoughts on “Indie Games to Get You Through MerMay”