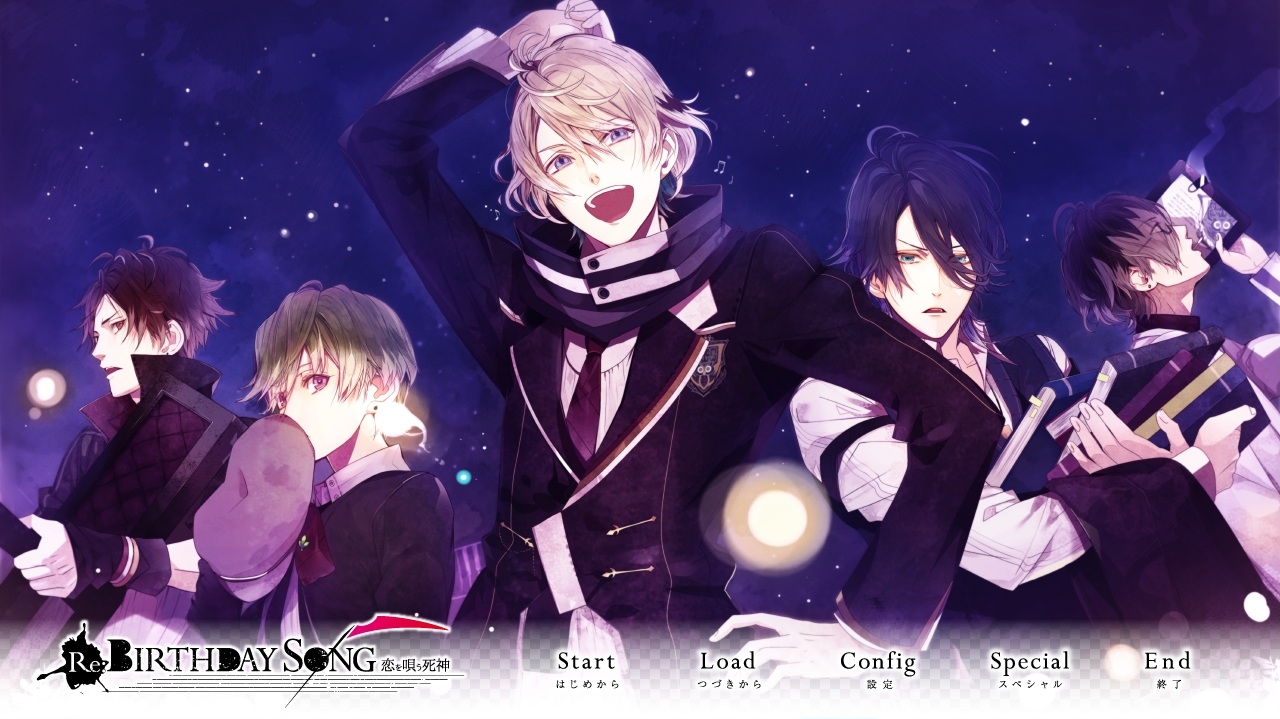 Re:Birthday Song ~Koi o Utau Shinigami ( Re:BIRTHDAY SONG～恋を唄う死神～) is a 2015 Japanese supernatural fantasy otome game, developed by Honeybee (the team behind the popular, Starry Sky series). While the game does not have an official English language release, earlier this year, estearisa released a full English patch of the game. Of course as it is with most patches, you’ll have to purchase a Japanese copy of the PC game (not the Vita port) in order to play it. I will say this now, it’s easier to find copies of the Vita version of the game, however, they won’t work with the patch. (Ebay has a few copies floating around though)

The game follows Kokoro a young girl who suddenly becomes the newest resident of the Netherworld, a place where souls with deep regrets go when they die, as she trains to become a full fledged shinigami. But, because our heroine isn’t the sharpest tool in the shed, she has to take supplementary lessons with a group of shinigami rejects…

I am notorious for never finishing games, so I picked up Re: Birthday on a whim, since my playthroughs of Period Cube have pretty much come to a standstill. So, I figured I’d play one route and go back to PC, what I didn’t expect was to be hit over the head with wave after wave of tear inducing emotions… OH MY GOD THE FEELS IN THIS GAME!! I’d played one of Honeybee’s other titles, Starry Sky in Spring ages ago and it’s like comparing apples and oranges!

“That song is an offering from the Reapers—a Requiem—very near the boundary between heaven and hell where one’s soul returns to. In that place is a school in which Reapers—beings that collect human souls—are developed and trained. Assembled as “Reaper Cadets” at this school are the protagonist and her peers who were once human. There, all possessing the same aspiration of becoming a Reaper, cadets pair up with one another to study in order to become a fully fledged Reaper, but…

The protagonist, Cocoro, wasn’t selected by anybody to be her partner as she performed poorly in all disciplines of Reaper study. As a result, she was grouped with other cadets that were falling behind, and was made to take special supplementary lessons. The other attendees of these supplementary lessons are fellow Reaper cadets. It’s filled with unique guys, all with their own reasons for attending the school.

Cocoro must choose one of the boys to become partners with, however… With her partner at her side, will she be able to become a fully fledged Reaper?

Or… Will a single tale of love between two underachieving Reaper cadets be woven instead?”

In the game when a soul dies they either go to heaven or hell, however if a soul still harbors deep regrets at the time of death they instead go to the Netherworld, which functions as a sort of limbo for lost souls. People that reside within the Netherworld are given the chance to train to become shinigami, who traverse between the Present World and the afterlife to ferry the souls of the dead to either heaven or hell.

Shinigami work in teams of two and use singing to coax a human soul off into the here after. It’s a fantastic premise and on it’s own makes for a compelling story, however, someone decided that was a bit too dark for the kiddies and threw in some school life elements to balance everything out. First, I should clarify that when done right, school life otome games are great, and to an extent, Re: Birthday Song does do a fairly good job blending the school life aspects of the plot with the fantasy aspects… however, I couldn’t help but feel like the parts of the game that focused on the school events weren’t nearly as compelling as the darker supernatural/fantasy elements of the plot.

Despite what the lighthearted first half of the game will have you believe, Re: Birthday Song deals with some rather dark themes, namely, death. Each of the characters is in the Netherworld because they still had some deep regrets at the time of their death and given the ages of some of the characters, the circumstances surrounding their deaths are not altogether pleasant.

After dealing with the MC from Period Cube, Kokoro (name changeable) was a welcome treat! She may not be the smartest or the strongest otome game heroine in the world, but at the very least she has an established personality (take notes Amnesia).

Unlike the other residents of the Netherworld, Kokoro can’t remember anything about her life prior to her death, but rather than letting that get her down, she pretty much takes everything in stride. She gives herself over to her new life in the Netherworld and works hard to become a shinigami, however, she’s not one for book learning and winds up getting sent to supplementary classes with the other failures. But, like with everything else she doesn’t let that discourage her as she attempts to make friends with her classmates and generally just be an adorable ray of sunshine.

Kokoro is an adept singer, something that even among other shinigami makes her stand out as her songs seem to convey her feelings and emotions to anyone that hears them. She has trouble making friends, but through sheer force of will, she manages to worm her way into the hearts of everyone she meets. The circumstances surrounding her death and her arrival in the Netherworld are a mystery, though I suspect that changes slightly depending on which guy you choose to pursue.

There are five potential romantic partners, the four guys from the supplementary class and the class’s teacher. So far, I’ve only completed one route (Kairi’s), but aside from the teacher, the other guys get a fair amount of screen time throughout the game. Though in order to uncover the circumstances surrounding their death you have to play through their individual routes.

I wound up playing Kairi’s route first and I was not expecting such a cheerful guy to have such a heartbreaking backstory. I feel like the other routes will be just as tragic, if not worse, so I’m preparing my heart! Overall I like all the guys, though I will admit that I’m a bit biased towards the mature and studious, Yoru and the aloof professor, Nami, than I am the others. But, they all seem to have their merits, even some of the side characters manage to steal some of the spotlight from time to time.

There were two side characters in particular that caught my eye; shinigami duo, Zen and Rikka. They mostly serve as mentors to the students in the supplementary class, especially Kokoro, who they treat like a kid sister. I really wished we got to spend more time with them, since it would have been awesome to see full fledged shinigami at work, but alas, they are only romance options in the “sequel” Un: Birthday Song ~Ai o Utau Shinigami~.

The artist for Re: Birthday Song has worked on quite a few otome games in the past, most notably the Diabolik Lovers series. Unlike other games that use bold lines and vibrant colors in their character designs, the art style in the game reminds me a bit of watercolor paintings. While the backgrounds are well defined with strong coloring, the character sprites and CGs use a softer coloring that seems to fade. This is especially apparent when looking at the characters’ hair and clothing, which starts off darker gradually becoming lighter as if the characters themselves are petering out of existence the lower you get in the frame. While a majority of the game uses a more defined art style, there were a few scenes that used a chibi style, but those were usually reserved for comedic scenes featuring Kokoro and all of the guys.

I felt the soundtrack which consisted of light piano tracks (and I believe there was a flute in there too) did a great job of setting the mood for the game, at times lighthearted and fun, giving those scenes a slice of life feel. On the flip side, there were more than a few tracks that conveyed a sense of melancholy that help add a bit of an emotional sucker punch to some of the more serious scenes.

I usually don’t make comments about the translations of localized and translated games, simply because my Japanese language skills are not nearly as strong as they once were and I’d rather not draw attention to them. However, since this is a fan translated patch, I’m going to make a bit of an exception, but, it’ll still be pretty broad strokes.

As far as patches and translations go, this was one of the better ones, while the menus and extras weren’t translated into English, everything else was and Theresa did a really great job with it! There were a few instances where I noticed some typos, but it was never enough to take away from my enjoyment of the game. Of course there were a few lines that didn’t exactly translate well into English, but in those instances I found the translated lines to be a fitting compromise between the two languages. Honorifics were added into the translation and I genuinely appreciated them, since some translators will either edit them out or attempt to use the English equivalent, which can have mixed results. Overall this was a very clean English patch!

I have read enough shinigami shoujo manga over the years to know that they typically end in one of three ways: tragedy, bittersweet, or straight up fluff. And after playing through one route, I can safely say that Re: Birthday Song manages to incorporate all three into the narrative of the game. I laughed, I cried, I felt things… Even the Best endings (Rebirth End) pull at the heartstrings, leaving you with an underlying bittersweet feeling despite resolving most if not all of the central conflicts of the route and tying everything up in a neat little bow.

As I mentioned earlier, the game does deal with the deaths of the characters, some of which might be triggering. So, if you aren’t comfortable with death (accidental or otherwise), it’s probably best to give this game a pass. But, if you can handle the emotional roller coaster that is Re: Birthday Song, this is a really fun game with just enough lighthearted moments to balance out all of the heavy plot elements. I’m excited to see what the other routes have in store and you can expect a full game review… *cough* eventually.