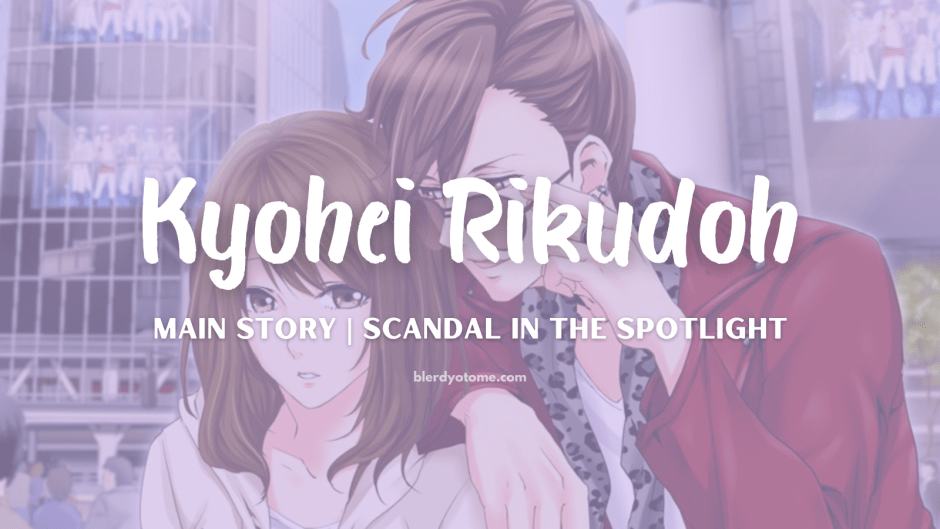 So when Voltage “cancelled” Scandal in the Spotlight a few months ago, there was a bit of fan backlash, I mean really, who doesn’t want to date an entire Japanese boy band? So, imagine my surprise when I saw the announcement that Voltage was planning on bringing the app back from the dead!! That almost never happens, when Voltage kills an app that’s it, or at the very least it takes years for them revive it *cough* LOVE LETTER FROM THIEF X *cough*

I’m not gonna lie, when I first saw Kyo, I thought he’d be an arrogant, selfish prick, like all of guys Voltage has a tendency to force on us during their initial app releases… But, Kyohei Rikudoh was nothing like that, in fact Kyo is one of the sweetest Voltage guys out there…

Kyohei Rikudoh, the charismatic producer and front man for the highly popular boy band, Revance. Like most confident, alpha-males, he’s a bit of a jerk at first, wasting no time blackmailing the MC into being the bands new ghostwriter. Like a king in his castle, Kyo commands absolute perfection from everyone in his kingdom, be they employees at Rikudoh Productions or the members of Revance, and that includes the MC. He immediately orders her to write lyrics for Revance’s 10th Anniversary concert, but not just any song lyrics.

Kyo wants the MC to write some extra steamy, sexy lyrics. Of course the MC, has no idea what he means by “sexy lyrics”, so Kyo offers to teach her… with his body! Okay, I get it Voltage, Kyo is supposed to be some over sexed pop star, but what motivation would he have to sleep with some Mary Sue he, quite literally, picked up off the street?! But, who am I to question Voltage logic at this point in my life…

But other than some mild teasing and a double entendre or two, Kyo doesn’t seriously pursue the MC until much later in the route. In fact, I was surprised at how tame he was considering how much emphasis Voltage put on his sexual prowess… Kyo was a lot different from what I expected, I mean don’t get me wrong, he’s and arrogant, condescending, butt munch for the first half of the game, but on the flip side, he’s not a particularly cruel man, either.

Despite his young age, Kyo is an industry powerhouse, he’s the front man and producer of Revance an extremely popular boy band, all while running a lucrative production company! He puts his heart and soul into everything that he does, and it’s his wholehearted dedication to his goals that makes him a capable leader, worthy of respect. Revance and his production company are his life and he he would do anything to ensure their success, even if it means resorting to unsavory methods. He proves this early on in the route when he uses his influence in the entertainment industry to sabotage a rival band’s television appearance to keep them from surpassing Revance.

Now, that was a low blow, even for someone with such strong convictions, like Kyo, but it wasn’t like he did it out of spite. I don’t want to spoil it for you guys, but Kyo’s devotion to Revance stem from more than just his role as a member of the band, it’s a much more personal and emotionally driven desire than I would have ever imagined coming from a character like this. It added another layer to his characterization that really set him apart from the other Voltage confident/alpha male characters.

I love that the writers took the time to develop his growth over the course of the story. Everything in this route unfolded naturally in it’s own time, making for a much more organic story, which in hindsight is something that’s missing from some of the other routes in Scandal in the Spotlight.

As for the romance between the MC and Kyohei, it was a rough start for both of them. Kyohei is an arrogant pop star with a bit of a king complex, and the MC is a reluctant lyricist that dreams of writing screenplays, and for the first few chapters there’s this cute cat and mouse dynamic between the two of them. This route was riddled with belligerent sexual tension! Usually, Kyo would say something suggestive to inspire seductive lyrics from the MC, only to turn her into a simpering hot mess, throw in the pressure to produce a great song and you have one very unproductive MC! It isn’t until they open up to one another about their dreams that their relationship starts to take a more romantic turn.

They develop a mutual respect for one another, which motivates them to work harder towards their goals. As the story progresses, Kyohei becomes noticeably softer towards the MC, going out of his way on several occasions to encourage her when she starts nearing her breaking point with the lyrics. But, that’s not all, he genuinely comes to care for her not as Revance’s ghostwriter, but as an important person in his life. Now there was one point in the story where the MC makes a request that had me facepalming… Voltage pulled the same crap with Kai in My Wedding and the 7 Rings, and I didn’t like it then and I certainly didn’t appreciate it here either. Thank goodness Kyo is much more of a gentleman than I gave him credit for…

Other than that hiccup, I really loved the way the romantic aspect of this route was handled, because it was built on a foundation of mutual understanding and support! Gosh, there were so many wonderful moments in this route, I’m having a hard time picking my favorite. Before I knew it, I was head over heals for this arrogant popstar and I know you all will love him too!

When I started this route, I didn’t expect much from the charismatic leader of Revance, in fact I was prepared to go full rant mode in this review like I did with Masaharu in Dangerous Seduction… But, OMG, Kyohei is my new favorite in the game, his route was so good. It gave me butterflies, seriously this is the best route in the entire game which is a welcome surprise given how half-assed Voltage tends to be with the Confident/Alpha Male routes!

Of course it, was not without it’s flaws; the “love triangle” was not my favorite part of the route, but it was handled well so I guess I can’t complain and the MC made a few questionable decisions, which made me want to pull out my hair… But, overall it was easy to overlook those minor shortcomings, because this was just an all around well written story and Kyohei *fans self* was such a well developed character.

There are two endings in this route: the Dramatic Love End and the Romantic Time End, both of which I enjoyed, however the Dramatic end was much more satisfying and fit well with Kyo’s overall portrayal in the route. Also I mentioned this in my first review of the game, but, I highly recommend getting the end set, I know $2.99 is a lot of money for a non story extra… but Kyohei sings in a short music video and I have to admit that I kept hitting the replay button until my iPad died… so yeah…

In the end, I abso-frickin-lutely recommend playing this route! It’s a fantastic introduction to Scandal In the Spotlight and Kyohei is an absolute dream! This is hands down my favorite route in the game, and yeah, I’ve played them all! Go play this game now!!

12 thoughts on “Scandal in the Spotlight | Kyohei Rikudoh Review: The Guy I Like is a Sexy Pop Star”