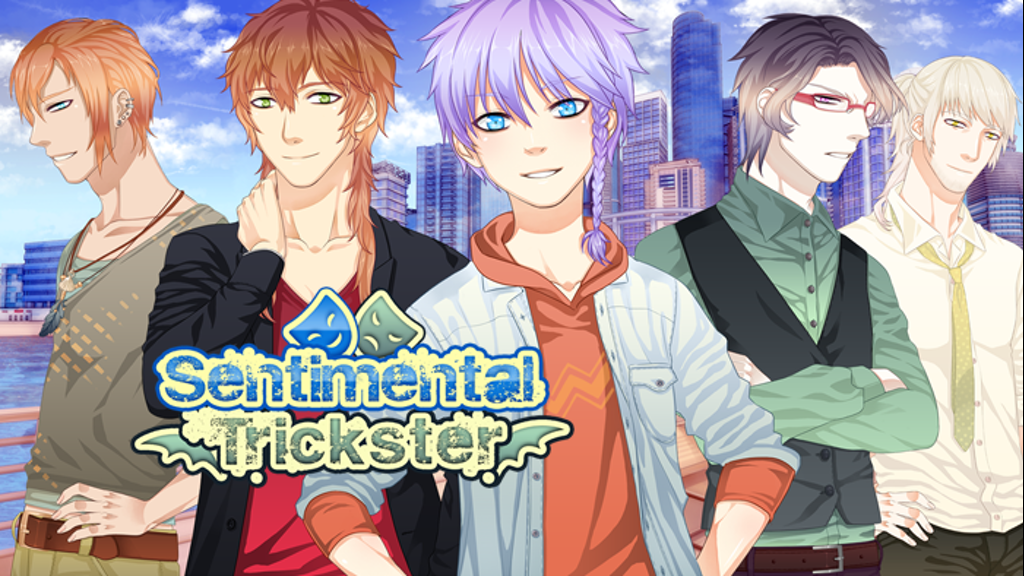 Edit (8/30): The Kickstarter for this game was successful at meeting its funding goal and two of the stretch goals. The final funding amount was $9,036 with 328 backers! The game now has a tentative release date of March 2017!

I am super late with this, but, about a week ago an indie game developer actually reached out to me on twitter about their new 18+ BL visual novel, Sentimental Trickster! As you all know I am a lover of all things BL, so best believe I was over the moon to hear about another indie BL visual novel!!!

It’s taken me awhile, but I finally got around to playing the demo and I can’t wait to see the final product!! The game is the brain child of one woman, so everything you see in the demo was put together by one person! Talk about dedication!

Sentimental Trickster puts you in charge of Haru and all the important choices ahead. To be honest, your protagonist is not sure he’s made the right ones so far. The only thing he’s sure about is that he’s lost. Maybe moving to a big city wasn’t such a good idea after all? Especially when your boarding house is in the middle of a freaking big, black forest. Well, at least he meets a hot guy who shows him the way. Now the only thing left to do is start attending classes, graduate and become independent… that is, if you can even make a living after finishing an arts college.

There are a set of Stretch Goals that will expand the scope of the game if met. Some of the expanded features include additional CGs, a secret romanceable character, partial voice acting, additional Nitro+chiral-esque bad endings, an 18+ fandisk and much more… Upon it’s release the game will be available for Windows, Mac, and Linux; but, there is also a campaign to get the game greenlit for Steam as well! Please keep in mind that this game is a commercial release, so the final game will be $15, but there is an Early Bird tier on the Kickstarter that offers the game for ONLY $10 (as of right now there are only 10 left)! The tentative release date is set for March 2017! Currently the game has exceeded its $5,000 campaign goal with 173 Backers! The campaign will run until August 28th 2016!

There are download links for the PC version of the demo, right there on the Kickstarter page! The demo covers roughly an hour of gameplay, so if you are still on the fence about the game or just want to see what the game has to offer give it a try.

So PLEASE check out the Kickstarter campaign, HERE, and lend your support. There are still 29 days left and they are currently at $5,121 and every little bit helps! I’ve already made a contribution to the campaign and I can’t wait for the finished project when it is released. The various price tiers come with some nice goodies so definitely check them out! Also make sure to check out the webpage and twitter for production updates and news!