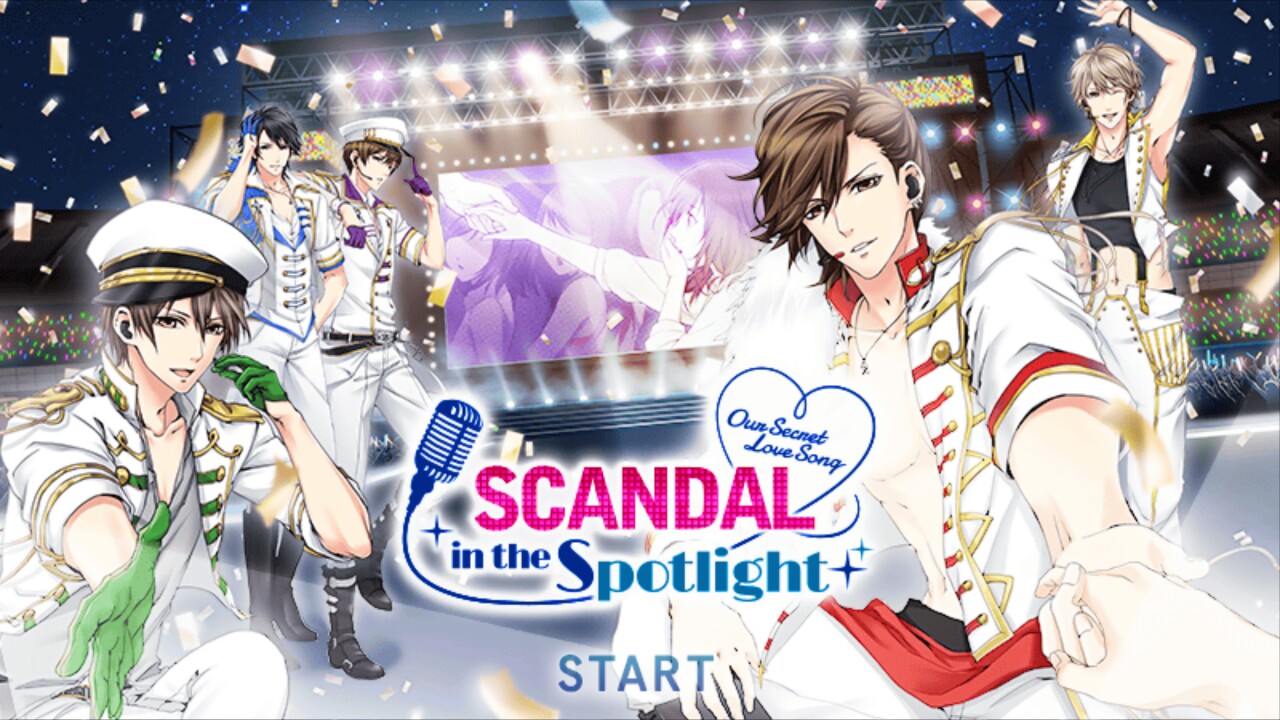 So I sorta kinda fell in love with REVANCE! For those of you that don’t know, REVANCE is the fictional boy band in Voltage Inc.’s mobile otoge Scandal in the Spotlight: Our Secret Love Song. At first I was hesitant, SITS, comes on the heels of Serendipity Next Door, which also featured a secret love affair with a musician. However, unlike Spotlight, Serendipity Next Door was cancelled before the story could really take off.

So I wasn’t really ready to invest my time and money into another game, only to see it cancelled prematurely. Boy am I glad that I changed my mind, the game reminds me of Voltage’s older (at least to me) games like Love Letter from Thief X and Be My Princess, in that I instantly fell in love with all of the characters! There is something special about each and every one of the selectable guys, and believe me when I say I haven’t felt this way about an otome for a long time.

Scandal in the Spotlight Official Synopsis

Japan’s the most hottest boy band!
Five members perform, but the sixth–the lyricist–never shows his face. However, his sudden disappearance has forced YOU to take his place!

You’re about to embark on a life of deception and glamour alongside national pop stars!

So you (name changeable) are twenty-something living in Tokyo, and an aspiring screenwriter. You find that you have misplaced your screenwriting book, so you head to your local café to search for it, but instead you bump into the handsome barista, Makoto. The super smooth coffee bushier, cheers you up with a piece of cake, some kind words, and a couple of tickets to see the hottest boy band in Japan, REVANCE! The prologue then flashes forward to the concert, where you hear REVANCE singing the lyrics from the song written in your lost notebook. As if on cue your friend tells you that all of the songs REVANCE sings are written by a secret sixth member of the group named Ryo.

But all thoughts of stolen lyrics are quickly driven from your mind by the appearance of your lecherous boss. He invites you to the concert’s after party, where he tries to molest you, yes the creep tries to drag you off to his room. But, lucky for you two of the boy band members come to your rescue. However, in the process, you manage to rip off your boss’s toupee, embarrassed he runs off. The band to your surprise recognize you from the concert and invite you to their penthouse. They reveal that the tickets you had were actually reserved for Ryo/Makoto, and that he has disappeared.  They then ask you to be their lyricist, and with that your normal life is turned upside down as you step into the backstage world of the spotlight as REVANCE’s new ghostwriter!

Characters of Scandal in the Spotlight 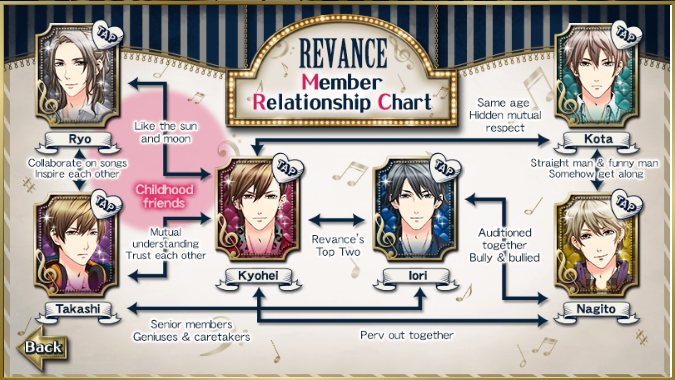 Final Thoughts on Scandal in the Spotlight

So I usually don’t do this, but, I highly suggest you get the special end sets—I know $2.99 for an end set is a bit much. But, not only does it unlock both the Romantic and Dramatic endings, oh no, it unlocks a special VOICED video for each guy! Yes, the boys of REVANCE will serenade you in their individual bonus video. Each guy has a different and distinct voice, which I absolutely adore. My favorite by far is Kota, but I was pleasantly surprised by Takashi, who knew he was the belter of the group?!

Of course I have a favorite, I always have a favorite, Kota, he stole the show! He and the MC just seem to have more in common, what with him being an actor and she an aspiring screenwriter. The whole romance between the two of them just had me “doki doki-ing” the whole time!

Overall, I like the game, if you like K-pop/J-pop, boy bands, and forbidden/secret romance; Scandal in the Spotlight is for you! Each route shows a different side of REVANCE and I love how every member fits in to make the group great! This a great game and I am looking forward to Season 2!

13 thoughts on “Mini Review: Scandal in the Spotlight”