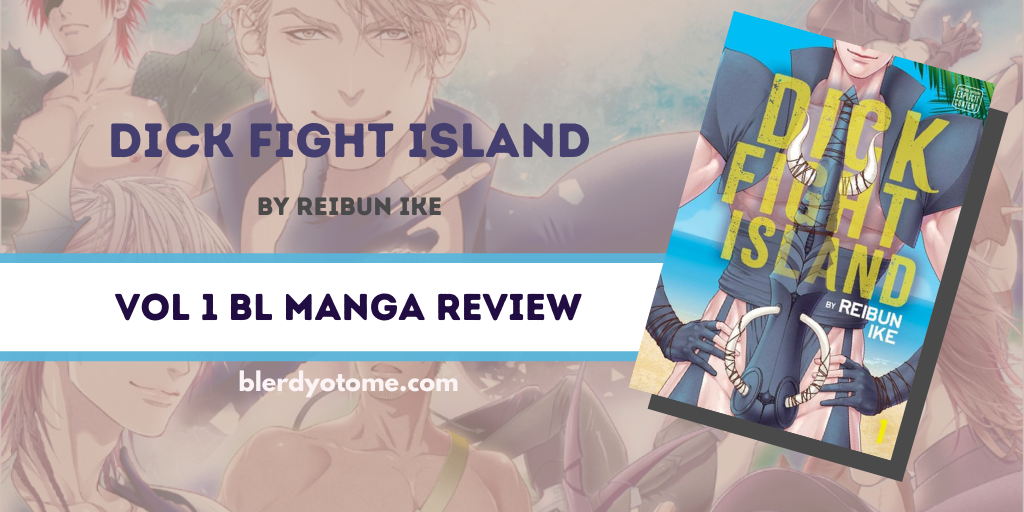 Dick Fight Island (8人の戦士) is a fantasy boys love manga by Reibun Ike and published in English by SuBLime Manga. I’m gonna be honest with you all, I bought this manga purely for a good laugh, I mean, come on, Dick Fight Island ?! I thought a private detective falling in love with a crow was pretty out there—but a manga about an island of dick fighting warriors really takes the cake. Have you seen the cover? It’s an image of a buff scantily clad man wearing the most elaborate (and dangerous looking) codpiece I have ever seen and that was all it took for me to THROW my money at SuBLime’s latest release. And, it seems I was not alone, because in its first week, Dick Fight Island was both the #1 Romance manga and the #1 Yaoi & LGBTQ+ manga on Amazon’s Bestseller lists… y’all we made it!

So like any self-respecting fujoshi, I cracked this bad boy open for a bit of light reading and I was not prepared for this manga! This manga is something else—so let’s take a trip to the archipelago of Pu’lau Yong’unda where it’s manly as hell to bare one’s ass and fierce warriors battle with their mighty swords for the chance to be king!

The tournament to choose the next king of the islands is about to begin. The rules are simple—whoever comes first loses! To ensure they don’t, participating warriors protect their mighty swords with armor that grows larger and more elaborate with each tournament. But one warrior who’s been studying abroad has returned with a secret technique certain to force a pleasurable eruption! Is there a warrior alive able to withstand it? Or is this deft warrior destined to become king?!

This is one of those manga that you absolutely don’t take seriously going in—it takes place on a beautiful tropical archipelago where men earn the right to become king by fighting in a tournament where you lose if you orgasm—it’s so over the top and ridiculous that I can’t believe someone published this series. This easily could have been a smut without plot situation, with dudes slapping dicks together—which absolutely happens and it’s A-MAZING—and be done with it. But, there was actual thought was put into this story. The battles are a spectator sport, kind of like a Gay Olympics, every four years, eight champions are chosen to duke it out for the chance to be king of all the islands. There’s just one rule, you just can’t come first… seems simple enough. Wrong. These men have been training hard for four years, perfecting their own secret techniques that are sure get them that win in the upcoming tournament. Some like the “main” character (a term I use loosely) Hart of the Jewel Clan spent the past four years “studying” abroad learning a secret technique unbeknownst to the warriors of Pu’lau….

Yup, his special technique is stimulating the booty hole… and when I say I screamed during that scene… 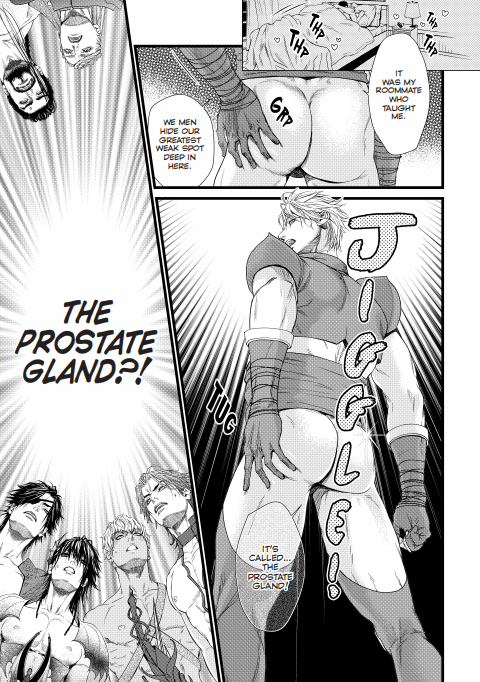 But, that’s not even the half of it, the warrior from the Healer Clan, Vampyr uses a weaponized aphrodisiac mist to make his opponent’s succumb and one of the newbie contenders, Taling uses a whip like contraption that he manipulates to stimulate his opponent’s sword. Oh, and while we’re on that, the participants in the tournament wear elaborate armor on their members that is somewhere between over the top fantasy armor and legit weapon of mass destruction (yeah, I’m looking at you Pisao, that blade is something else). I was of the impression going in that these men were inserting these weaponized penises inside one another, but that is blessedly not the case… they rip the armor off and go at it the old fashion way, but unlike most dudes, the men of Pu’lau aren’t afraid of a little foreplay~

These warriors use every means at their disposal to take down their opponents from the more traditional fisticuffs to martial arts—one of the clans has a fighting style based on Capoeira—to more traditional BL techniques like handjobs, blowjobs, and even nipple play (which is the most sensual of all the sacred arts), and yes, even kissing can be used to take down an opponent. All of this while a crowd of cheering spectators, oh and ah over each special attack or new technique. And let me not forget the current kings, who serve as sports commentators, discussing each and every move like it’s March Madness.

I have no shame in saying this, Reibun Ike had me with the smut, they literally didn’t have to do anything else and I probably would have kept reading, but, the brilliance of Dick Fight Island is that the characters themselves don’t see the tournament as this out there spectacle. To them it’s an honor to represent their respective tribes in the Wrym Tournament, this is the moment they have been training for for four years. And they give their all to the point that I found myself actively rooting for my faves. And yes you will have faves! Volume 1 did what other series fail to do in 30+ volumes and that is genuinely get me to care about these characters. Everyone gets a story arc, like jealous ex-boyfriend Chief Lobo who is still salty about losing his bae to the current king in the last tournament or Pisao and Judah who just wanna live together after the tournament, or my dude Hart, who really just wants to go home to his mainland bae (and the roommate who helped him “train” for four years). I know, there is actual romance in a manga about literal cock fighting, but it’s there and it is so wholesome and sweet. 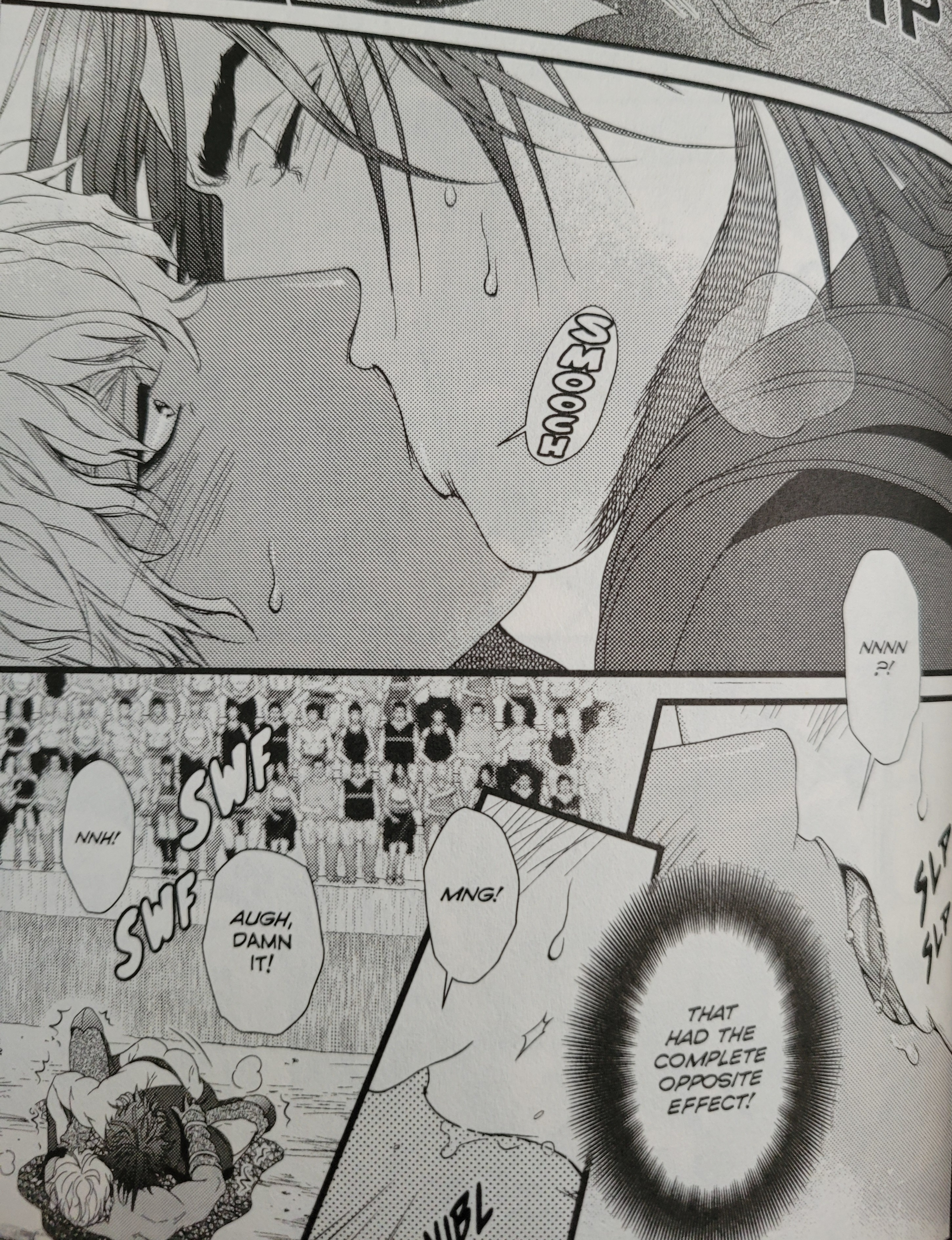 I’ll be damned if this story didn’t deliver a surprisingly immersive and smartly written fantasy story with it’s own unique lore and world building that actually holds up! The setting of the story, Pu’lau is an isolated paradise made up of eight islands, each with their own people and culture specific to that island. Like the Fang clan, a matriarchal clan of hunters, very few men are born on their island so it’s not uncommon for there to be female/female pairs—and let me tell you these ladies are built and I am HERE FOR IT! Then there’s the Sun Clan, a tribe of gentle fisher-people, and this is just scratching the surface, there’s a clan full of beautiful ethereal men and another where they keep dragons as pets. Also forget about the right to bare arms, in Pu’lau the right to bare them cheeks is the ultimate sign of masculinity and me, the fujoshi thirsty for any opportunity to behold some glorious glutes, am most certainly here for it. Just so much booty all the time, in just about every panel there is a bare ass just waiting to be admired. This is some Tolkien-esque level world building and I genuinely want to know more about these people and the island—please Ike-sensei, give us a Dick Fight Island codex. 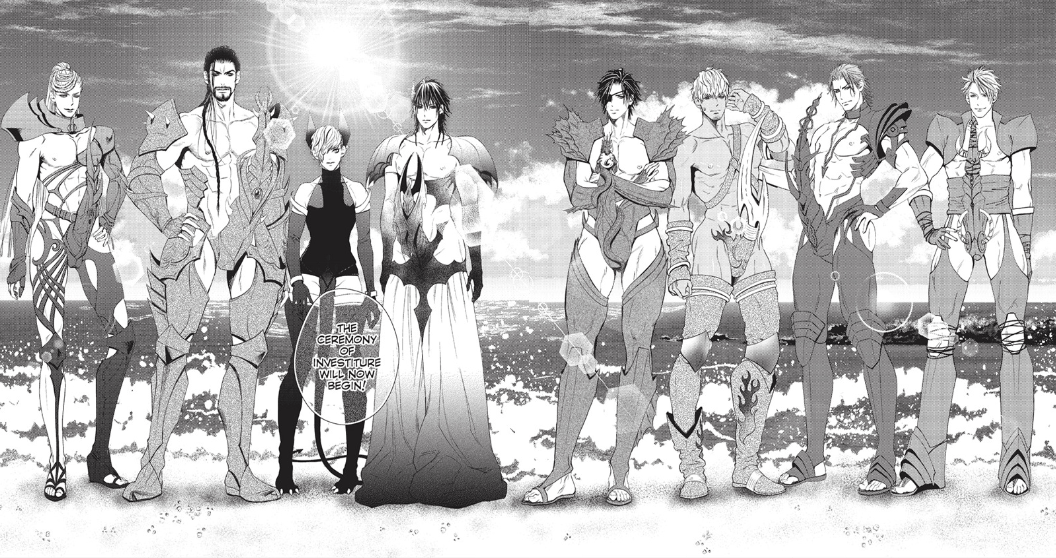 This ended up being longer than I intended, but Reibun Ike’s Dick Fight Character  is more thought out than it has any right to be, and I love it! I may have picked it up for the insane title and over the top premise, but I absolutely stayed for the smart writing, phenomenal world building, relatable characters, and yes the laughs. This is a must read for every BL fan out there (and hell, even if you’re not, I STILL recommend giving this a read)! Once again, bless you SuBLime for bringing us another delicious boys love title—I am eagerly awaiting volume 2! Don’t pass this gem of a series out!

Where to Read Dick Fight Island