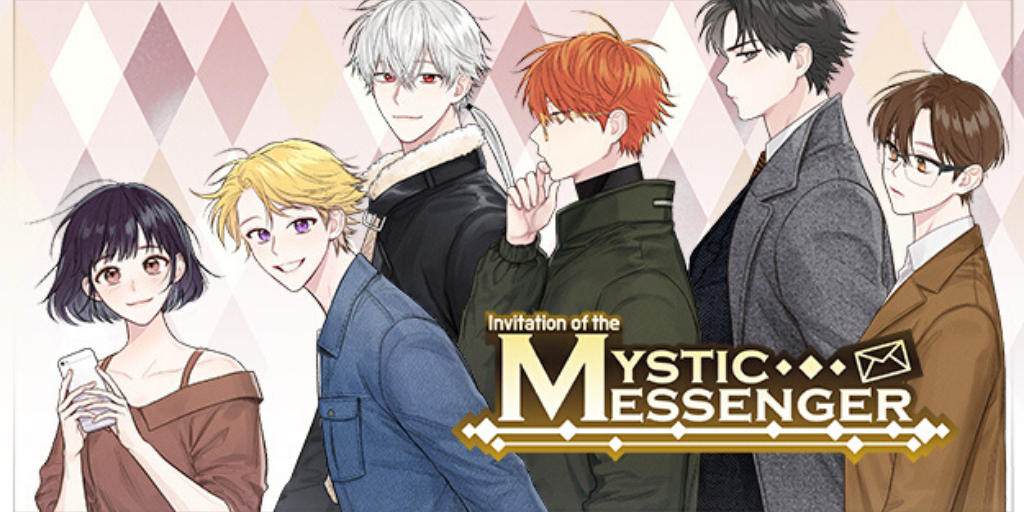 Like many of you, I dived head first into Mystic Messenger hell back in 2016—between the quirky characters and real time chatrooms—the game’s unique gameplay style quickly stole the hearts (and sleep) of everyone in the otome community. And even now four years later, Mystic Messenger is still going strong, spawning new events and stories—but, did you know that Cheritz’s wildly popular mobile game had an official webtoon?! Invitation of the Mystic Message is the official webtoon adaptation of the dating sim, Written by GIMAN with Art by meriG.

Hana is usually a glass-half-full sort of person, but lately, nothing seems to be going her way. After yet another fruitless day of job hunting, she finds herself pouring out all her frustrations to a stranger in the street. The kind stranger disappears before they get a chance to exchange names or numbers, however, leaving behind a phone with nothing but a single messenger app. “Can you read this message…?” As soon as Hana logs on, username “Unknown” tells her they know the person she is looking for. Although a little suspicious, she is intrigued. Who was the stranger that lent her a shoulder to cry on? Who is this “Unknown” she is chatting with? To find the answers to her questions, she must first accept a mysterious invitation. Time to get reacquainted with Jumin, 707, Zen, Yoosung, Jaehee and the rest of Mystic Messenger!

Currently the Prologue and the first 2 chapters are available for free over on Tappytoon with the next three chapters going live on 7/11/2020! And what self respecting otome fan would I be if I didn’t immediately read the available chapters?! This won’t be an official review, since there are only 3 chapters available right now, but I did want to share my thoughts on the comic.

What have I missed? I was offline… : The Story

So, with the jump from mobile game to webtoon, there were bound to be some changes to the story to suit the new medium and I have to admit I’m liking what I seeing. The first three chapters hit the major plot points of the prologue—Hana discovering Rika’s phone and receiving the messages from Unknown that lead her to Rika’s apartment where she first interacts with the members of the RFA in their chatroom. But, there were some fun changes, like Hana having chance meetings with each of the members of the RFA members before she knows anything about them or the chatroom. I couldn’t help but squee when she ran into my forever love Seven at a convenience store—poor dear needs a hug. Though I’m not gonna lie I had some serious mixed feelings about the interaction with Rika, which if you’ve played the game you know how wholly unlikable she is as a character. So, it was super jarring to see her so… normal.

The members of the RFA are little more than a passing mention, with Hana only interacting with them towards the end of the second chapter. But even with that little taste I couldn’t help but remember all my wonderful sleep deprived memories with each and every one of my loves~

Did you get mysterious messages?: The Heroine – Hana

The one change that I liked most was that, they gave the MC an actual backstory and personality! This is an obvious move seeing as the whole nameless/faceless heroine trope wouldn’t really translate all that well in a webtoon (I mean it barely works in otome games most of the time), so I was happy to see that they made her an actual character. Hana is a young woman who has a string of bad luck—losing her job and her apartment in one fell swoop—and having gone through something similar I could really relate to her sense of helplessness… maybe I’m just one lost phone away from my own Mystic Messenger…They also mention that Hana is an orphan who originally lived in a group home, and I wonder if we’re going to get some more background on that in the main story or if they’re going to stick with the main MM story beats.

I just got your messages: Where will this story go?

Adaptations of otome games have been pretty hit or miss since it’s hard to condense all the various plot threads and routes into one linear story. So, most tend to go either go the open ending route, where each of the LIs get a small diminished role in the overall narrative and the heroine ultimately doesn’t “choose” anyone to be a couple with (ie. Brothers Conflict) OR they pick the most canon route and follow that (ie. Code Realize). With Mystic Messenger each route is pretty self contained (at least with the Casual Routes—Yoosung, Zen, and Jaehee) but there are there are some major plot threads that become more important as you move into the Deep Routes (Jumin and Seven). So, I’ll be curiouse to see what tactic they take with this adaptation… especially with the romance. My money is on Seven or V, but who knows it’s really anyone’s games here.

So, are you going to check out the Invitation of the Mystic Messenger Webtoon?

I am super excited for this webtoon, because not only do I get to revisit all of my favorite characters again (without the 11 day sleep deprivation), but this adaptation will attract fans from outside of the otome games community… and maybe a few folks will make the jump to the Mystic Messenger game!

I can’t wait to see where the writers go with the story and you can bet I’ll be first in line to read the next three chapters on July 11th! But, while we wait for the next installment, you can read the prologue and the first two chapters over on TappyToons RIGHT NOW!