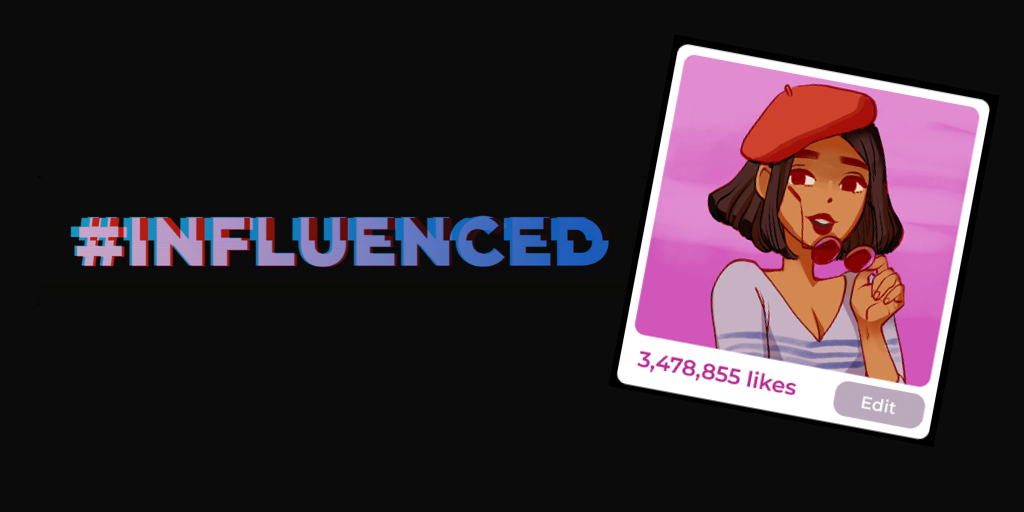 There is such a huge variety of titles among the annual NaNoRenO submissions, that you never truly know what is going to pique your interest. I’m just blindly picking games at random, giving priority to games that I find aesthetically pleasing—it’s shallow, I know, but when there are over 100 games to get through can you blame me for picking game with pretty art first?

So, this is how I found myself playing Pilot_Star’s kinetic novel, #influenced, which I suppose is fitting given it’s focus on the superficial world of internet influencers. With it’s chic character designs and bright coloring, #infuenced is definitely one of the better looking titles in this year’s lineup—but beneath it’s cute appearance is slow burn horror story that doubles as a surprisingly clever social commentary. 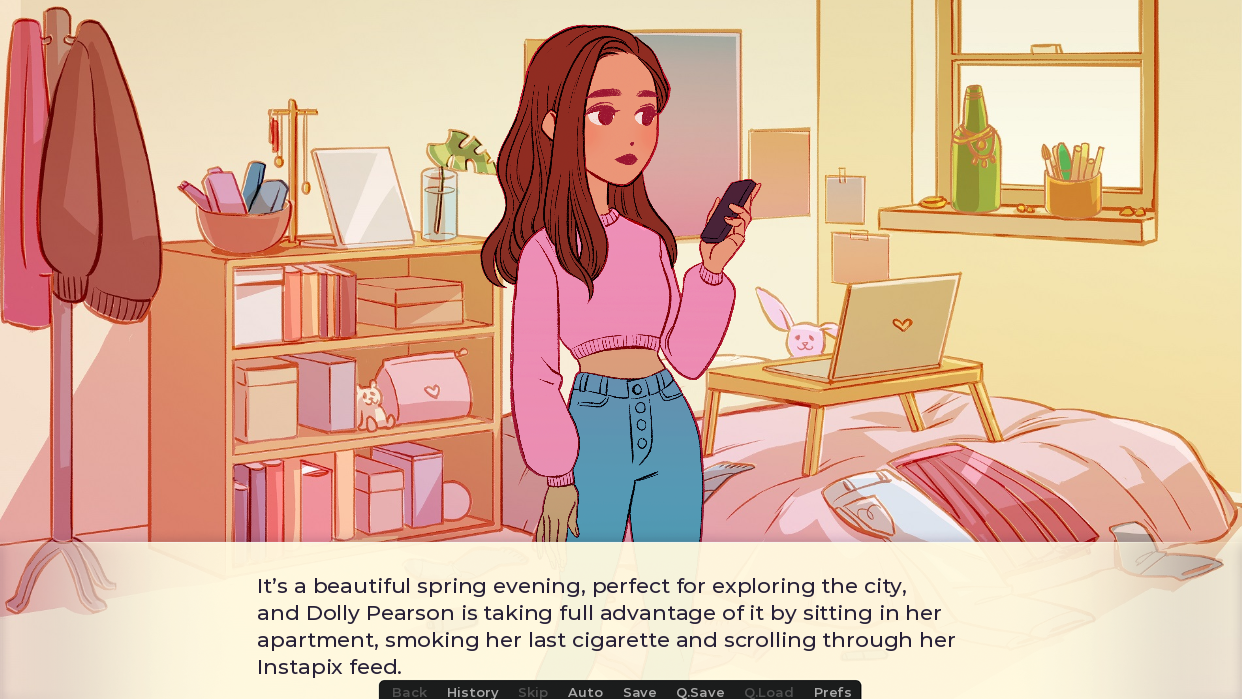 The game follows Dolly Pearson, an up-and-coming influencer on the social media site Instapix. But, despite visiting all the cutest cafes and taking flawless selfies, she’s frustrated with her meager 5K follower count. Everything changes when she befriends Instapix star Vanessa, who has just made the move from New York to her town. Seeing this as her chance to make it big, Dolly asks her for a few tips and Vanessa is happy to lend her new bestie a helping hand… just so long as Dolly is willing to do whatever it takes…

While I don’t plan on spoiling the game, I feel obligated to note that, #influenced warrants a trigger warning for graphic descriptions of self-harm and suicide.

Now that the warnings are out of the way, on to the actual review. #influenced is a kinetic novel, so it follows a linear story and there aren’t any choices to make, like you’d find in a more traditional visual novel. The whole game takes about 30 minutes to get through, so you can blaze through it in one sitting—which is perfect for someone looking for something quick to play. I will admit that kinetic novels aren’t my usual go-to since I like a bit more interaction with my games, but I can’t deny that every so often I just want to kick back and click my way through a story without having to exert too much brain power—and kinetic novels are perfect for folks looking for a self contained story.

I think it’s an especially great format for a slow burn horror like this, because it allows the player, or in this case, the reader a chance to immerse themselves in the story without worrying about whether or not their choices are going to net them the “Good” ending. It makes the story the focus, so it’s important for the writing to be strong enough to hold your attention AND BOY DOES #influenced deliver!

Based on the synopsis you think the story is going to go one way—Vanessa is perfectly poised to be the villain of this story, which given the fickle nature of internet celebrity, would be a fitting narrative choice. But, in truth it’s the glamour and allure of social media stardom that ultimately spells disaster for Dolly. On her quest for fame, Dolly is faced with several difficult decisions that will test not only her resolve, but exactly what lengths she is willing to go to to please her “fans”. #influenced reminds me of the short story How Much Land Does A Land Need? by Leo Tolstoy in that it makes you question just how far a person is willing to fall to achieve their “dreams”. It’s a slow downward spiral that will have you on the edge of your seat as you watch Dolly succumb to the whims of a faceless stranger, who promises to help her reach new heights.

#influenced is a well executed game, everything from the storytelling to art to the music comes together to tell this very engaging thriller reminiscent of an episode of Black Mirror. So, if you’re looking for a story that will stay with you long after the credits roll, definitely pick up #influenced.

You can also contact star_pilot on Social Media through the following channels: