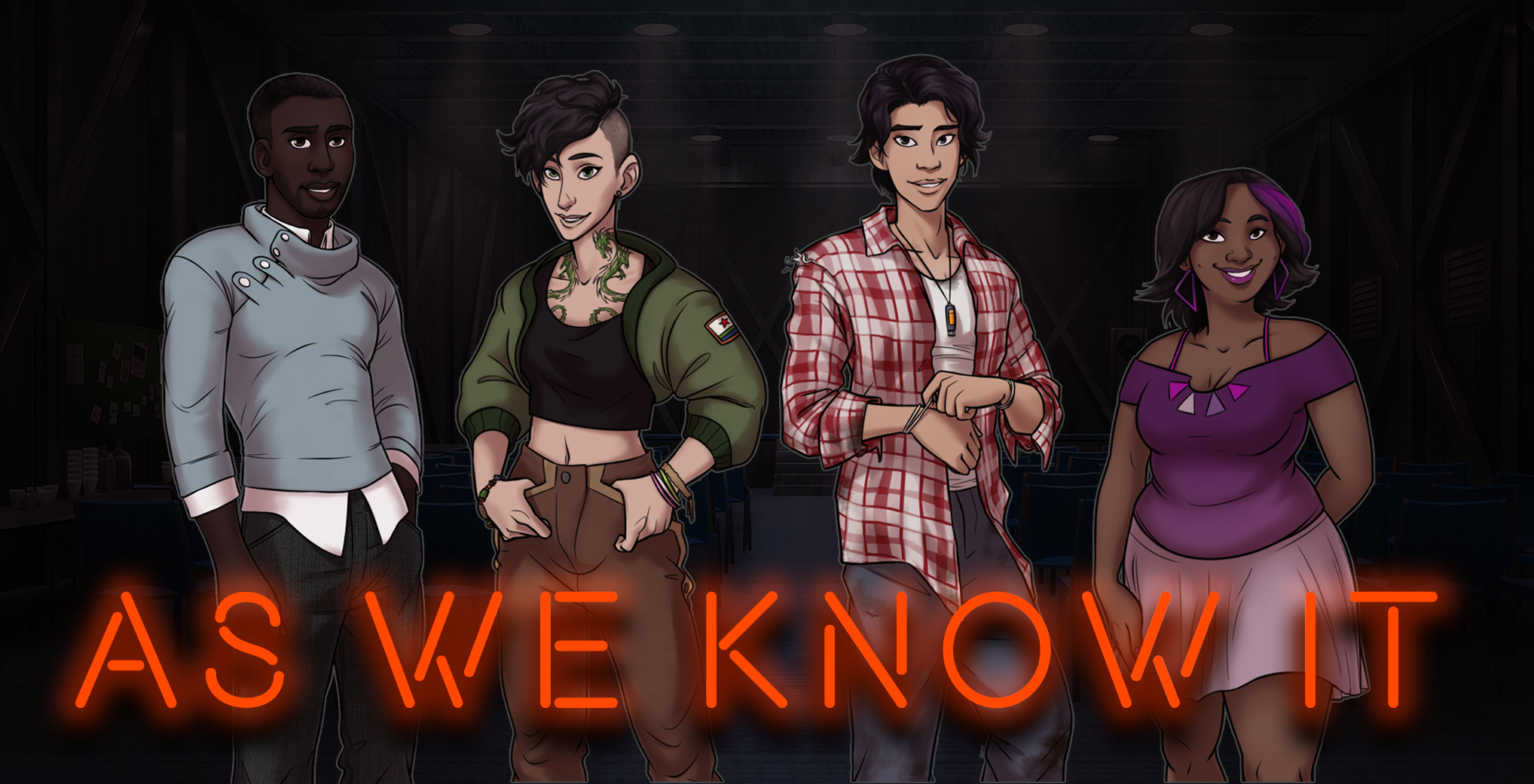 Jaime Scribbles Games just released their newest game, a dystopian life-sim visual novel As We Know It. Set in the distant future, where the world has been plagued by climate shifts that have turned the surface into a veritable wasteland, people have taken refuge in underground sanctuaries. One such subterranean town, Camden offers a safe haven for a those select few lucky enough to secure an invitation to the exclusive oasis. You (default name Ashlynn Phillips) and your mother are given the opportunity to escape the surface for the safety and security of Camden. The mayor, Rick Davidson and the people of the city welcome you with open arms, and the abundance of resources are a welcome change from scarcity of the surface. But, all is not as it seems in Camden, as seeds of descent spread the social order of the city starts to deteriorate and you must decide where your allegiances lie. Do you stand with the Mayor and protect your new home or do you rebel? The choice is yours.

Fans of the dystopian fiction like the Hunger Games, The Maze Runner, and the Divergant series will feel right at home with Jaime Scribbles Games’s newest title, with it’s futuristic setting, eclectic cast of 20-somethings, political intrigue, and romantic undertones, As We Know It  feels like a visual novel adaptation of a YA novel. It has many of the staples we’ve come to expect from post-apocalyptic fiction, but, getting bogged down with cliches, As We Know It slowly eases the player into the events of the game through its life simulator gameplay style. Anyone that has ever played a life simulator game knows that they can be a bit cumbersome with their detailed stats and affection ranking systems, but, that is circumvented by the agency these types of game give players in shaping their experience.

Players choose how Ashlynn (name changeable) acclimates to life in Camden, by deciding what career she pursues (Agriculture, Security, Medicine, or Community Affairs) and how she spends her free time (reading in the Library, jogging in the Gym, or socializing in the local Bar). You can also choose to pursue romantic relationships with four unique love interests: Jude, the music and tech loving Agriculturalist; Gloria, the upbeat and mischievous Head of Community Affairs; Eva, the outgoing and flirtatious Security Officer; and Micah, the calm and composed resident Doctor. In addition to romance, you also have the opportunity to pursue three non-romantic friendship relationships with three of the residents of Camden: the bartender at the Icarus, Sam; the surly librarian, Trevor; and the spunky kid, Tabby.

The relationships you foster with the other characters is really what sets this game apart from the rest. The friendship paths are just as important as the romantic paths, so you have to make sure you balance both, since some endings are only achievable with high friendship stats. The friend side characters are just as fleshed out and developed as the love interests, with their experiences and motivations adding depth to the main story paths and offering unique insight into the world of the game.

I’ve said this before, but, I really appreciate games that go that extra mile to include characters of color in their narratives and As We Know It goes above and beyond the call of duty. In fact, one of the highlights of As We Know It is its diverse cast of characters. Not only are the love interests from a wide range of backgrounds and ethnicity, but the extended cast of characters are too. But, what’s more the diversity works from a narrative standpoint, because of the dystopian setting, this is exactly the kind of melting pot cast you’d expect to find in a post-apocalypse community. Camden is made up of refugees so it’s important to see all different types of characters living and working together. But, even more, as a person of color the inclusion of a multicultural cast gives As We Know It a more realistic feel, because it is representative of the types of people we might encounter in our own lives.

Even more noteworthy, is the customizable main character, Ashlynn Phillips. Like many newer visual novels, As We Know It allows players to adjust the skin tone and hair color of the main character. While you’re limited to four skin tones and eight hair colors, even this degree of customization is appreciated, because it gives players the chance to craft a character that reflects their own appearance even if it’s just a little. However, it appears as if customization comes at the expense of in game CGs, since their are none to speak of in the game at all. But, if I had to choose between CGs and a customizable MC, I’d choose the latter every single time.

As We Know It is about choices, each and every in game decision has lasting consequences, some lead to favorable outcomes, while others… not so much. Each outcome only tells a piece of the story, so you’ll have to play through the game a few times to get the whole story on each of the characters and the over arching plot. At face value, As We Know It is about Ashlynn’s attempts to acclimate to her new home as she integrates herself into Camden society; making friends, getting a job, and maybe finding love along the way. But, then the developers toss in a social upheaval conflict that builds momentum over the course of game. Midway through the game a terrible sandstorm ravages the surface world, and rather than giving aid to the afflicted the Mayor chooses to lockdown the city. His choice divides the residents of Camden spreading paranoia and inciting riots from some who disagree with the Mayor’s tactics.

It was an interesting narrative choice, since creates conflict not just between Ashlynn and her peaceful existence in Camden, but, also between Ashlynn and her chosen love interests. In some routes Ashlynn’s choice to support or go against the rebellion puts her at odds with her love interest while in others it offers a favorable outcome. There are real stakes for each and every choice. Romance isn’t always the best outcome, sometimes it’s just surviving.  So whether you’re looking for a by the book romance visual novel experience or something with higher stakes, As We Know It has just what you’re looking for.

So, the final verdict: As We Know It offers a unique gameplay experience, balancing the relationship building of a romance visual novel with the drama and intrigue of a post-apocalyptic novel. It’s branching storytelling and high stakes in game choices encourages multiple playthroughs to fully grasp the depth of the story and characters. With it’s representative cast of diverse characters and immersive life simulator gameplay style, As We Know It is a game that will keep players captivated from start to finish.

I highly recommend giving this game a playthrough if you have the chance, either on itch.io or on Steam.