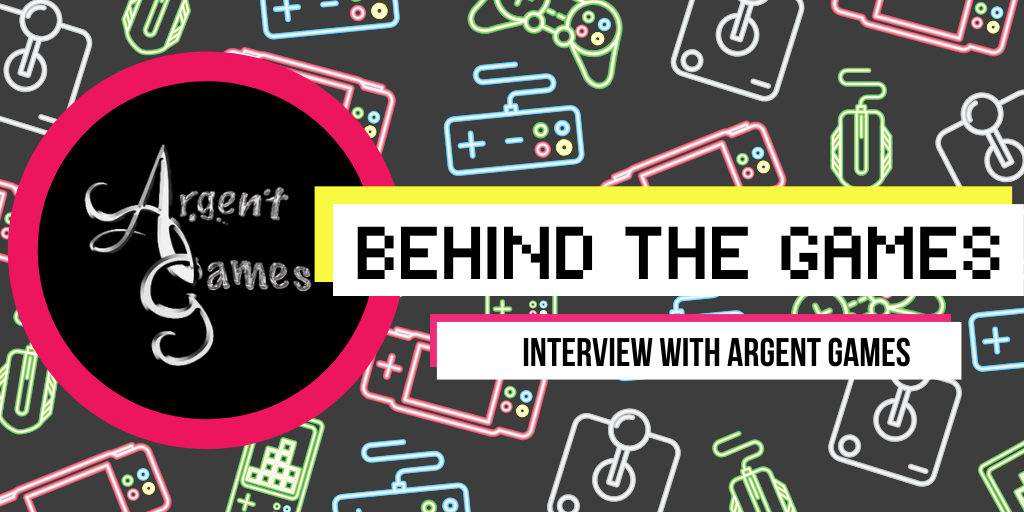 Last time around I spoke with Raikon Kitsune, the creator of the upcoming modern fantasy game, Reimei no Gakuen, so if you missed that, I definitely recommend checking that post out too! This time around, I had the chance to chat with Dovah and Gamma, from Argent Games!

This phenomenal twosome are the brains behind Argent Games! Since their debut in 2016, they have been knocking it out of the park with their unique BL game titles, each game better than the last. Currently, they have four games under their belt and one, Red Embrace: Hollywood, still in development and many more on the horizon.  So, without further ado, let’s turn things over to Dovah and Gamma…

Could you tell me a bit about your team? Who are you guys? What do you do when you aren’t making games? (Interests, hobbies, etc).

We’re a two-person team comprised of Dovah (writing, programming, graphic design) and Gamma (management, business handling, grunt work), although we’ve spent so much time together that we’re practically a single entity by now. Everything not mentioned before is something we contract out to other folks, namely art and music. Both of us are recent college grads, but Gamma’s moving on to work on a Ph.D, while Dovah’s doing game dev full-time.

Outside of games, Dovah enjoys reading random esoteric nonfiction (like biographies of composers and surgeons), working out, and muddling through songs on guitar. You can usually find Gamma engaged in cooking/eating and attempting not to die from falling up staircases or getting hit by cars.

To be honest, though, we probably spend about 85% of our time working, since we’re both obsessive perfectionists. Send help.

Dovah: I discovered VNs about 5 years ago, and I was immediately taken with them. I’d always wanted to do something both narrative and visual (my first dream job was as a movie director/screenplay writer), so VNs were like a perfect match. While I may go back to school and get my Master’s in something eventually, I’m currently pretty happy doing VN stuff full-time.

Gamma: I like games and storytelling. Game dev, but not necessarily specifically VNs only, would definitely rank high up on the list of enjoyable full-time jobs.

Argent Games has been hitting it out of the park with your game releases, each game even better than the last! With your team’s focus on BL media, how do you feel your games stand out from other BL game releases?

Unlike many BL games, we don’t try to appeal to our audience by simply selling sex. You won’t (and will never) find rippling abs and dangling dongs plastered across our releases. What you will find, however, is an exploration of more realistic relationships and feelings, a departure from usual BL tropes like relationships beginning with non-consensual sex and “b-baka, I can’t love him because he’s a guy!!” There’s enough of that out there already, if people want to see it. Life is complex, love is complex, and we believe it’s better to acknowledge that complexity than water it down into mush with a cherry on top.

Do you feel that your games help contribute to positive LGBT representation in the media, specifically in BL media? How?

As mentioned in the previous question, we’re making an increased effort to move away from the dangerous stereotypes portrayed in media, like showing abusive relationships/violent sexual advances in an oh-so-romantic light, which is pretty prevalent in BL. (Which isn’t to say these relationships shouldn’t be portrayed–just that it should be obvious that they are abusive.)

However, we’d also like to extend our projects to include more of the LGBT spectrum. Our current project, Red Embrace: Hollywood, allows for a protagonist who’s female, male, or non binary to date males, and we may very well explore games with more diverse love interests in the future. It’s also nice to portray diversity even if it’s unrelated to romance whatsoever–the only way the “outside group” really becomes part of the “norm” is through showing it in everyday, normal situations without necessarily drawing attention to the “otherness.” Rather than “this is Tom, and he’s gay,” it’s “this is Tom, that’s his boyfriend Abe, and we’re all going out to dinner together.”

What is the most difficult part of the development process? What is the “easiest”?

That’s a tough question, considering most of the dev process can be pretty back-breaking. The worst/most stressful part is probably the scramble right before release, when everything that possibly can go wrong will go wrong, Steam rejects your game five times, and half your hair falls out from stress.

There’s really no singular “easiest” part, but the work itself flows a lot more smoothly when there’s consistent progress/motivation. For example, when we wake up every day to lots of Kickstarter backers, or a brand new gorgeous piece of art from our artists, or even just a “yay, Steam approved your game!” email, it definitely gives us a boost of energy. Until the next inevitable catastrophe occurs, of course. It’s really a rollercoaster from start to finish.

Bonus: Since Argent games focuses on BL games… Do you consider yourself a Seme of an Uke? Why?

Seme and uke fall into our “disliked tropes” category, actually, which we’re attempting to distance ourselves from. But if we have to use tropes, it’d be more accurate to describe Gamma as an evil robot of despair, and Dovah as that one quiet guy in class who’s like, secretly planning to take over the world.

I can’t thank Dovah and Gamma enough for agreeing to do this short Q&A with me, they are definitely a force to be reckoned with and I can’t wait to see what other great titles they have in store for us in the future! While most of their games to date have been BL titles, there are plans for non-BL/yaoi titles under their Gallium Games subsidiary!

Below are some links to the Argent Games team’s social media and game related pages/sites. I strongly suggest subscribing to their pages and checking out their content, they are a phenomenal team with a wide range of games for you guys to enjoy!