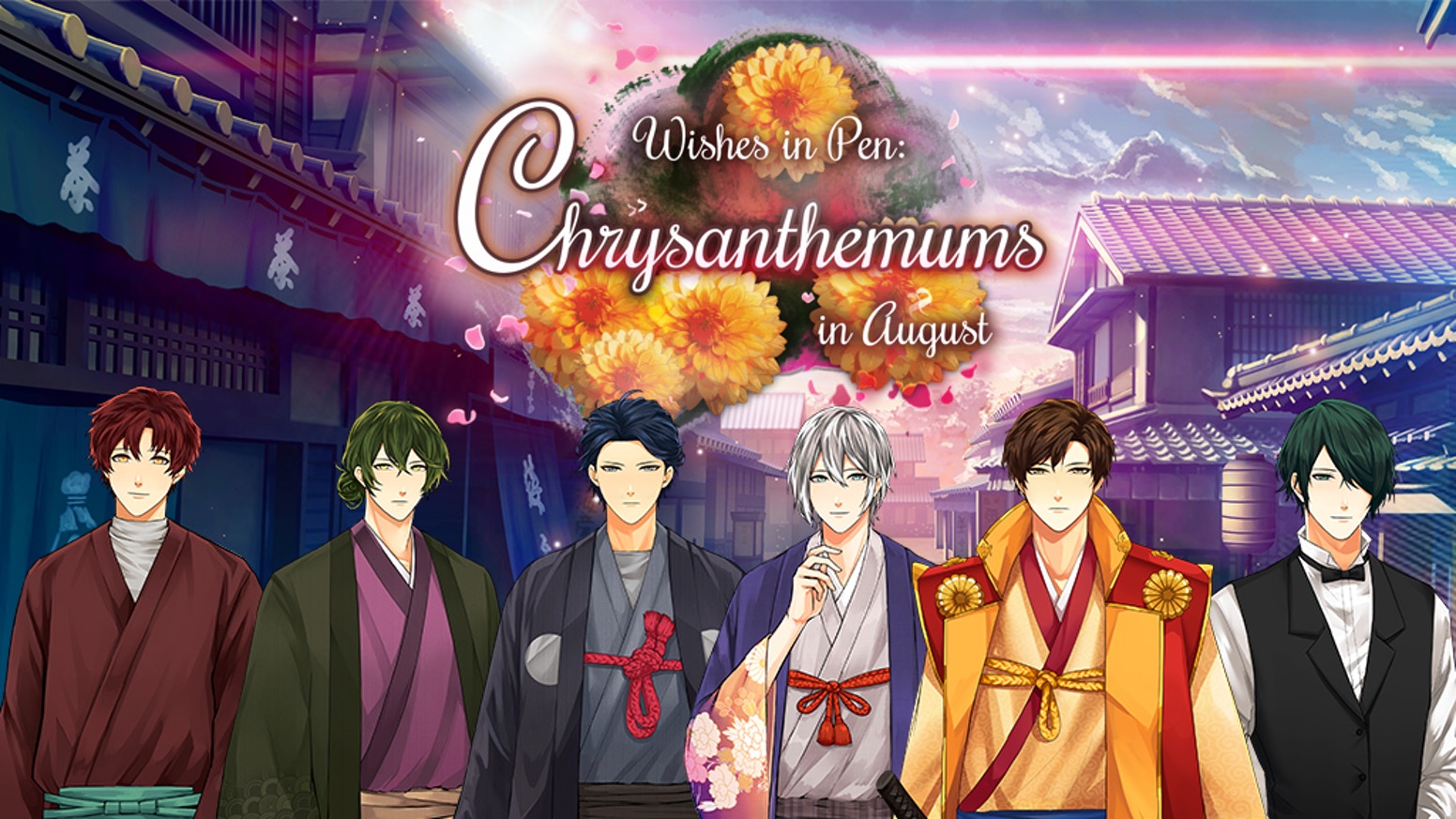 Hey hey Heroes, Travelers, and Wandering NPCs, it’s been a LOOOOONG time since I wrote one of these (bear with me while I get back into the swing of things), but there’s a Kickstarter campaign for an upcoming historical romance otome game, Wishes in Pen: Chrysanthemums in August that I think you guys should definitely check out! There are less than 10 days left in the campaign and they are almost at their goal!

For those of you new, here, Let’s Show Our Support posts highlight current crowdfunding campaigns for indie games (usually VNs and OELVNs). I give you guys the basic rundown of the game and the perks of supporting the game’s campaign, as well as links to all the relevant game related pages and sites.

I am a sucker for historical media, so when I saw this campaign I was over the moon! The game appears to be in the same vein as other historical themed otome games, such as Two-Five’s Yo Jin Bo and Idea Factory’s Hakuoki franchise.

Wishes in Pen: Chrysanthemums in August is an upcoming historical romance otome game, developed by Singapore based developers Lunaniere Studios (an otome based subsidiary of Afterthought Studios) in collaboration with Sekai Project (a visual novel production company behind a number of mainstream and indie titles).

On that fateful night, little did you know that a simple wish and a careless “yes” would turn your entire world upside down.

You’re the character and life is the player.

As time slowly ticks down to the pivotal choice you’ll have to make, will you be able to survive the in-betweens? And can you say goodbye to the ones who matter most?

Wishes in Pen: Chrysanthemums in August is a 40-hour historical epic that follows the a modern Japanese woman who is mysteriously transported back in time.  The game takes place at the end of the Tokugawa Shogunate and covers the events surrounding the start of the Boshin War (1868 to 1869).

Wishes in Pen: Chrysanthemums in August is a commercial release and will be available for Windows, Mac, Linux, and Mobile (Android & IOS). *Though an IOS release TBD* In addition to it’s multi platform release, the game boasts a number of great features that set Chrysanthemums in Autgust apart from other games on the market.

Choose Your Own MC

Unlike most otome games, players can choose the appearance of their in game player character. There are three standard designs to choose from (two of which are based on real life cosplayers Rea Kami and Etsuko. 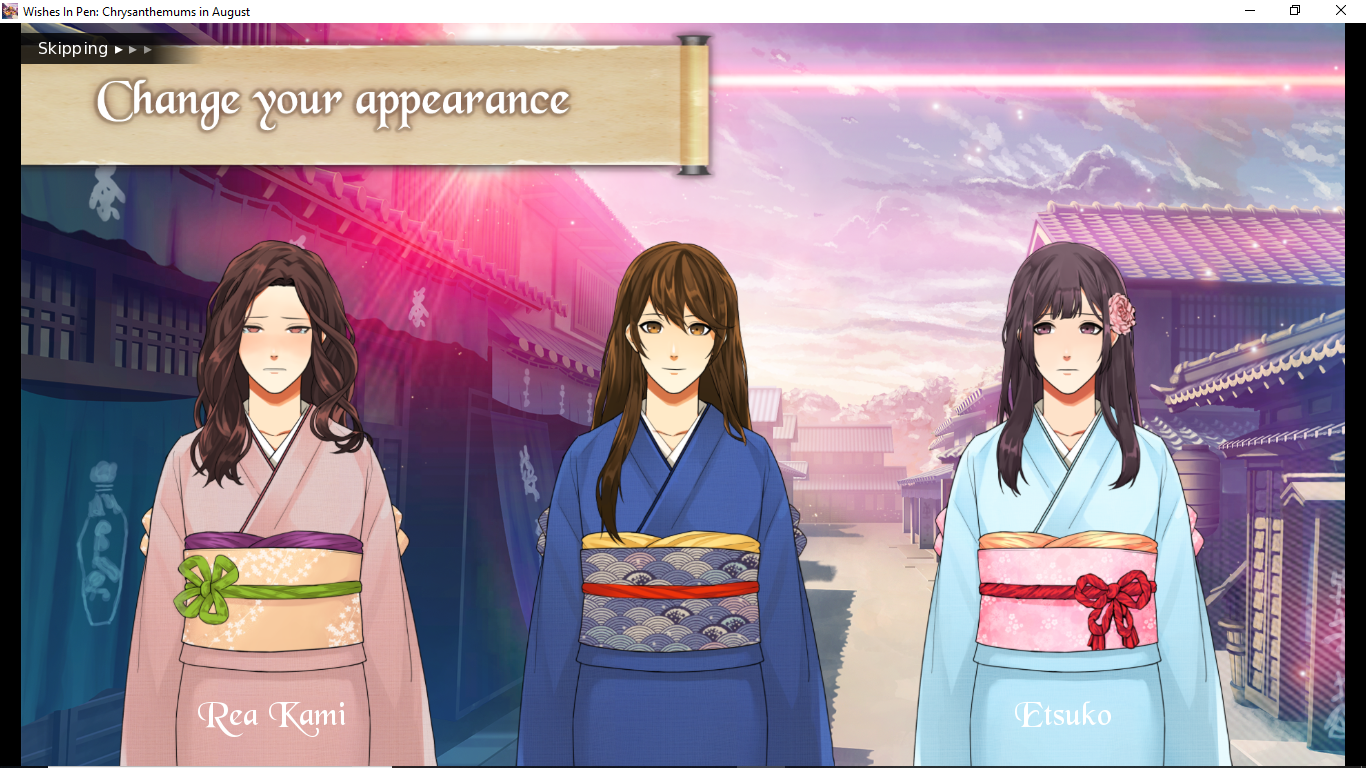 In order to bring the world of the game to life, all of the backgrounds and sprites used in the game are animated. Lunaniere creates a richly immersive world, by incorporating clean fluid background animations.

The game features an original soundtrack developed by THEM3 Studios, the team behind Afterthought Studio’s When Our Journey Ends. Each track beautifully captures the rich history of the time period, while also setting the mood for key moments in the game.

Wishes in Pen: Chrysanthemums in August offers a rather lengthy gameplay experience with 40-hours of immersive game play and an expansive storyline. There are five unique potential love interests, each with their own branching paths and THREE distinct endings per route.

Lunaniere has set their campaign at a $12,098 USD funding goal and they are almost there with less than 10 days left in the campaign. There are a number of perks for supporting the Kickstarter campaign and a wide range of pledge tiers for just about every price range! Below are some of the perks you can expect if you decide to lend your support!

*Note that the pledge tiers are listed in S$, since Lunaniere is based out of Singapore, however the equivalent USD conversion is also listed*

If you still aren’t convinced to support this game, I highly recommend checking out the demo, which covers the entirety of the prologue. Like the final release, the demo is available for Windows, Mac, Linux, and there’s an APK Android version.

You can also contact Lunaniere on Social Media through the following channels: