Average college student, Tsubasa Fujimoto finds her normal life turned upside down when her mother subjects her to a strange ritual that gives her overwhelmingly destructive magical powers. Confused and unable to control her newly awakened powers, Tsubasa must chooses a partner to help her acclimate to her new reality. 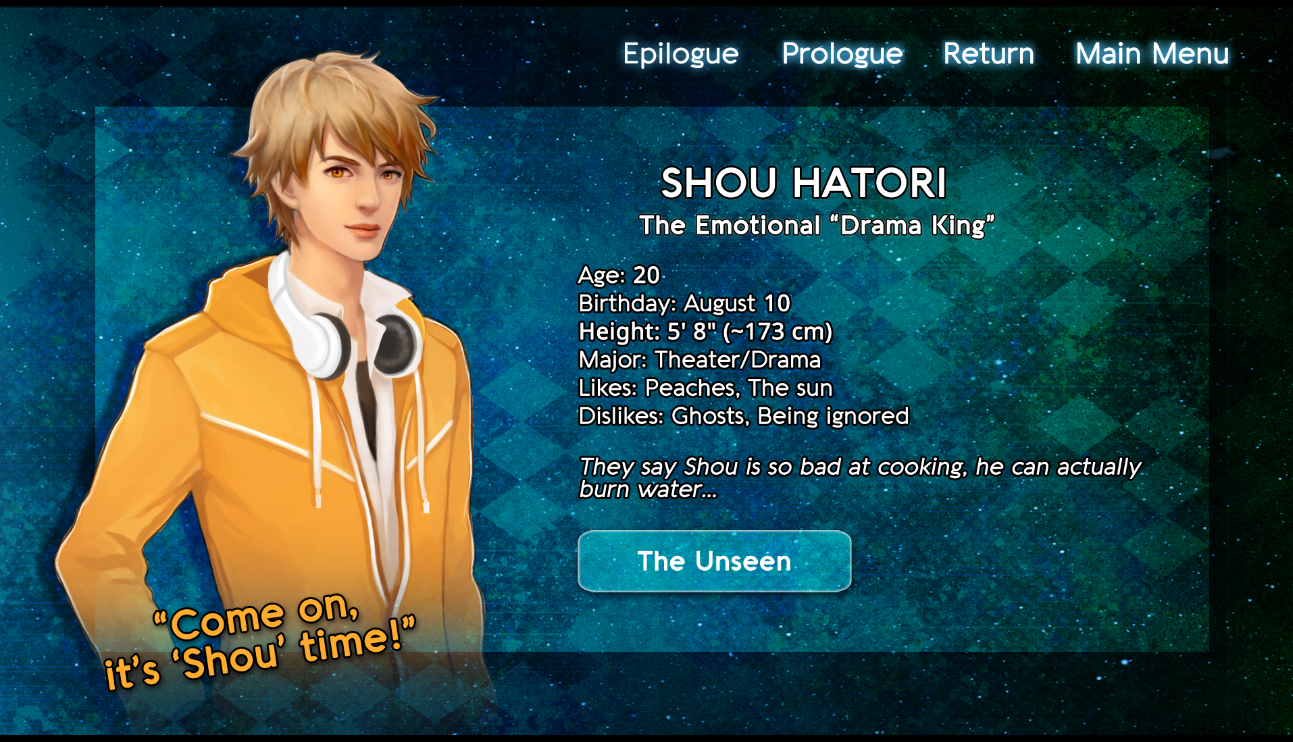 So this game was sitting in my backlog for ages before I picked it up and I am ashamed to admit that it took me this long to play through it and to finally start on these reviews! First up is the friendly and outgoing, phoenix, Shou Hatori! If you want a more general overview of the game, click HERE to read my first impressions about the game!

**Disclaimer: I DO NOT own any of the images used in this review, ALL images, screenshots, and characters belong to Aeon Dream Studios. Please if you are interested in the game, purchase the game either through itch.io or through Steam!!

I don’t usually go for characters like Shou, I find their overly enthusiastic personalities to be a bit off putting but, Shou is just so bright and warm, I couldn’t look away… or maybe it was his bright yellow jacket, I can’t decide which right now! But, seriously, all jokes aside, Shou is a very warm and inviting character, from the moment he becomes Tsubasa’s magical  partner, he does his best to ensure that she is as comfortable with her new life as possible. From his cheerful emoji filled check-in texts and emails to their after school walks, he makes Tsubasa’s well being his top priority. He never pressures her into talking about herself or her powers, but just knowing that someone is there for her if she needs them is a great comfort to her in the early stages of their relationship, even if at times, Shou’s extra attention can be a bit overwhelming.

However it becomes apparent that Shou is dealing with his own demons, early on several characters (namely Tatsuya) question whether or not he would be a good partner for Tsubasa, even Shou himself seems reluctant to take on the role. And given his rather lax personality, I assumed Tatsuya was concerned about his ability to take the job seriously, but that wasn’t the case at all. They are really concerned about whether Shou is capable of being her partner, you see, Shou doesn’t have a handle on his powers either, so it’s one of those “the blind leading the blind” kind of situations. But, despite that he still vows to help her as best he can, with the practical side of magic instead. There’s this nice supportive friendship that builds up between the pair through their shared magical issues and I really liked seeing them work together as equals, rather than in a mentor/mentee capacity. It really made their friendship seem more natural, since they were working towards the same goal, all while supporting one another.

Now, that doesn’t mean that their relationship isn’t without its fair share of angst and drama, because it wouldn’t be a party without those two… *ahem* The relationship between Tsubasa and Shou starts off platonic enough, but like most routes with characters like Shou, Tsubasa finds herself developing feelings for him pretty early on. I mean I get it, Shou is a sweet guy, and it’s easy to get the wrong idea when he’s being so friendly. I’m big enough to admit that it didn’t take me long to fall hard for the guy either, he’s just so open and honest, there aren’t any expectations or pretenses, Shou is just, well, Shou! He’s just full of so many strong emotions, it’s easy to get caught up in his moods, when he smiled, I smiled… when he cried, my heart just about broke in two. He has this magnetism that, I don’t think even he is aware of that draws people to him… It can give a girl the hope that their relationship is much more than just friends, throw in a few “platonic” hugs and hand holding and you can see how a girl could get the wrong idea. I don’t want to call Shou, a tease, because he’s not, he’s very friendly with everyone, but my goodness did he play tug-o-war with my emotions! The denial was strong in this route…

So, both the Tsubasa and Shou have a few skeletons in their closets that greatly effect the progression of the story and the larger narrative of the game. Tsubasa is still coming to terms with what her mother did to her, and is unsure of herself and her newly acquired powers. While Shou, is dealing with pressure from his parents and their expectations for his future. He’s actually not as confident in himself as he appears, he is full of insecurities about himself and his powers, which serves as the driving force of his actions throughout the route. He desperately wants to be accepted, so much so that he is willing to give up his own happiness for the approval of others. He gives everything he does his all in hopes that one day he’ll be the kind of person others expect him to be. Despite his cheerful disposition, Shou is really lonely and full of self doubt, but through his partnership with Tsubasa, he learns to trust in himself and his abilities.

I actually played this route a little while ago, but I held back on writing the review, because I wanted to have something else to compare it to, and now that I also have Tatsuya’s route and a bit of Shinji’s out of the way, I feel comfortable giving my honest opinion about Shou and his story. Shou’s route was the very first route that Aeon Dream Studios released, as such, it’s much more raw than the others. That doesn’t mean that this route is bad, far from it, it’s just lacking some of the complexity of the later routes kind of like a first draft that needs to be polished up a bit.

This route is super short when compared to the other routes in the game, and some aspects of the story were a bit rushed, but overall this was very well written. The characters are all well developed, especially the main antagonist, Iulius, who I found to be a very sympathetic villain, despite some of his more questionable actions. I was impressed with Tsubasa’s portrayal throughout, as well as the way she came into her powers towards the end. I absolutely adore Shou, but I wish his back story was a bit more fleshed out. While I feel like his story was given a fair amount of development, there were a few things that were kind of glossed over.

The final conflict was well paced and fit well with Tsubasa and Shou’s growth from the previous chapters, everything unfolded naturally and I appreciated the vastly different outcomes of each of the three endings. Also, and this is just a small complaint, I really wish Shou’s parents had been given sprites, it would have strengthened his conflict a bit more if I at least knew what the source of his grief looked like… Other than that, this was a fantastic introduction to the world of Mystic Destinies Serendipity of Aeons and an all around great story!

Aeon Dream studios plans on revamping his entire route in their Deluxe Edition of the game set for release later on this year, so I’m definitely looking forward to those improvements.

Have you guys played Mystic Destinies? What do you think of Shou? Let me know what you think in the comments section. If you like what you see, like this post or follow Nice Job Breaking It, Hero! As always THANK YOU FOR READING!!