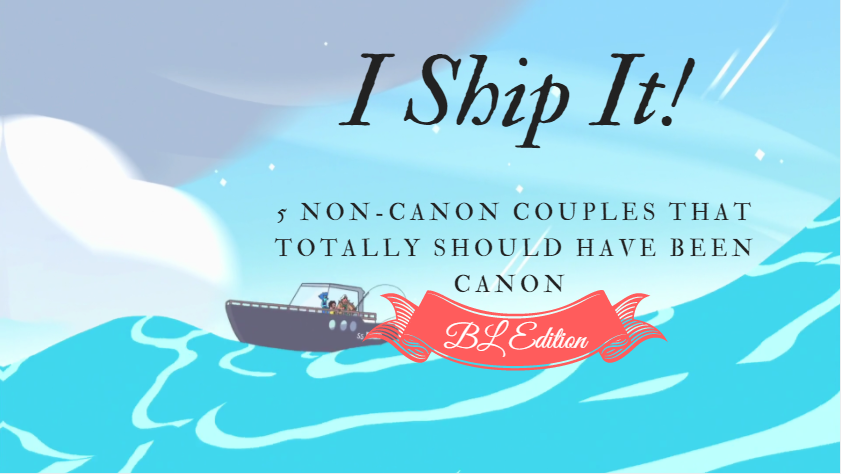 Have you ever seen two characters that you knew were perfect for one another? Friends that have known each other since they were in diapers. Or maybe bitter rivals that hate each other, but still somehow harbor a deep respect for one another. Or perhaps, they’re the unstoppable baka duo on a high school sports team. I’m talking about those bonds forged through a deep emotional connection between two characters, the kind of bond that transcends the confines of the author’s original intent! RELATIONSHIPS BORN FROM THE HOPES AND DREAMS OF FANS… BEAUTIFUL DELUSIONS THAT GIVE A MIDDLE FINGER TO THE CANON SENSIBILITIES OF THE CREATORS!!

Whether you love it or hate it, shipping is an integral part of every fandom. If two characters so much as breathe the same air as one another, I guarantee there is a person out there that ships it. But, are shippers really as crazy as folks make them out to be? Is there any basis for their pairings? Are there secret hints hidden in the source material that supports these ships? *shrugs noncommittally* I’m kind of on the fence about shipping, on one hand I do ship characters and I quite enjoy fanfiction, but, I also don’t go out of my way to ship X character with Y character while watching or reading something… that is unless the subtext is blatantly obvious, and that’s how this post was born!

There are times when the subtext is just so in your face you can’t help but connect the dots. In this post I’m going to spotlight 5 non-canon pairings that should have been canon, because… reasons!! This list is not in any particular order, I just listed the pairings in the order they came to me, which I suppose could be used to suss out which pairings are my favorite… but, it’s not. My real OTP isn’t even on this list because as much as I hate to admit it, there really isn’t any in series evidence for the pairing… not that it stops me from loving that particular ship. So, all aboard, this ship is about to set sail!! 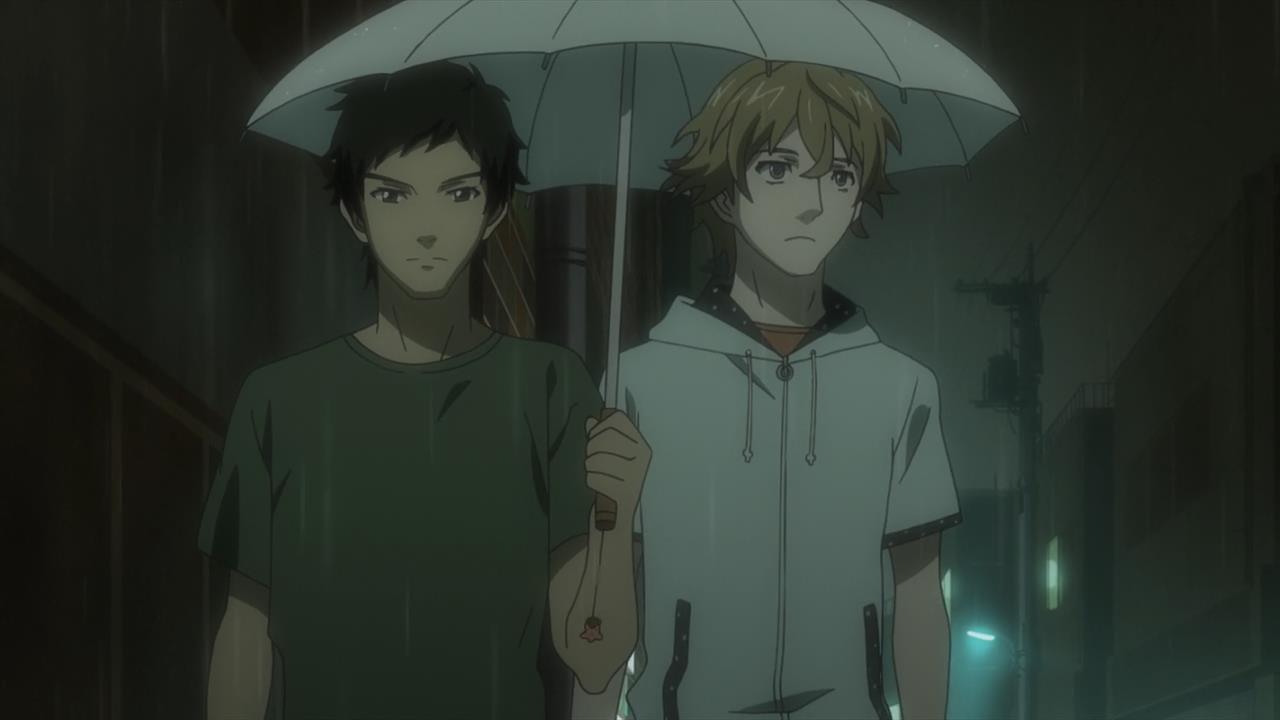 So, you can say what you want about the anime, but, there is one fundamental fact that everyone should agree on: the relationship between Hazama and Goto is anything but platonic! Hazama is a model turned vigilante obsessed with becoming a hero like the ones he idolized as a child, while Goto is a police officer with a strong sense of justice, though he lacks much of Hazama’s… “enthusiasm”.  At first it just seems like Goto is an unwitting participant in Hazama’s schemes, but as the show progresses we see that both men deeply respect one another and love them some sweet justice!

But, for me the biggest hint that Goto means more to Hazama than just a friend comes in the final arc. A particularly nasty enemy targets everyone Hazama has ever come into contact with and granted, he is upset to see his friends getting hurt because of him, but it isn’t until Goto is kidnapped by the big bad that Hazama finally loses his shit. He even threatens to kill the guy if he so much as lays a finger on Goto, mind you this is the first time Hazama has ever threatened to hurt anyone and I mean anyone in the entire series… think on that… But, if you still don’t believe me, there is an entire TV Tropes page dedicated to all the romantic moments between Hazama and Goto! Oh and did I forget to mention, that Hazama straight up proposes to Goto (they get married in the mobile card game) at the end… Yeah while butt ass naked to boot! 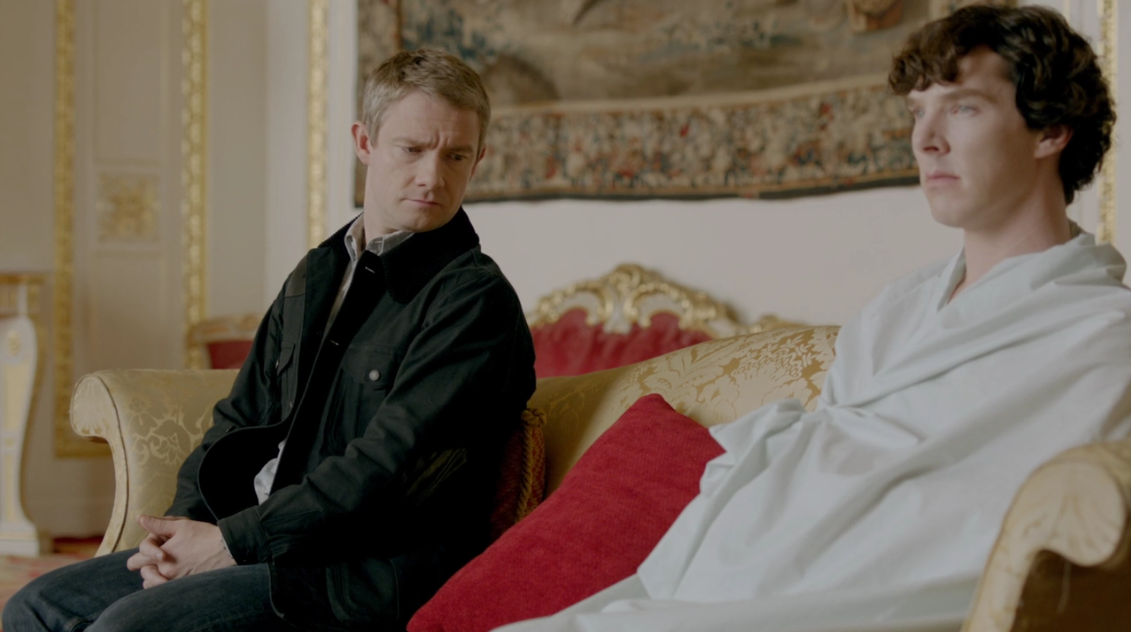 Right, so anyone that has seen the BBC’s Sherlock knows what I’m talking about with this one… Where do I start, Sherlock is a high functioning sociopath and Watson is his battle weary companion, together they traverse around London solving crimes… “bonding” Two attractive bachelors sharing a flat, where’s the subtext in that?!

The subtext is so overwhelming that there’s even a fan conspiracy dedicated to proving that Johnlock is actually canon and the whole show has been leading up to that fact. But, whether or not that is true, it’s obvious that Sherlock and John are in it for the long haul. No matter how many times Sherlock does something deplorable, John is there by his side cleaning up his messes… Plus the fact that everyone they come into contact with assumes they are a couple is just icing on the cake, or you know the fact that Sherlock does his damnedest to undermine all of John’s romantic relationships… This is another pairing that has a very long and extensive TV Tropes page dedicated to it. 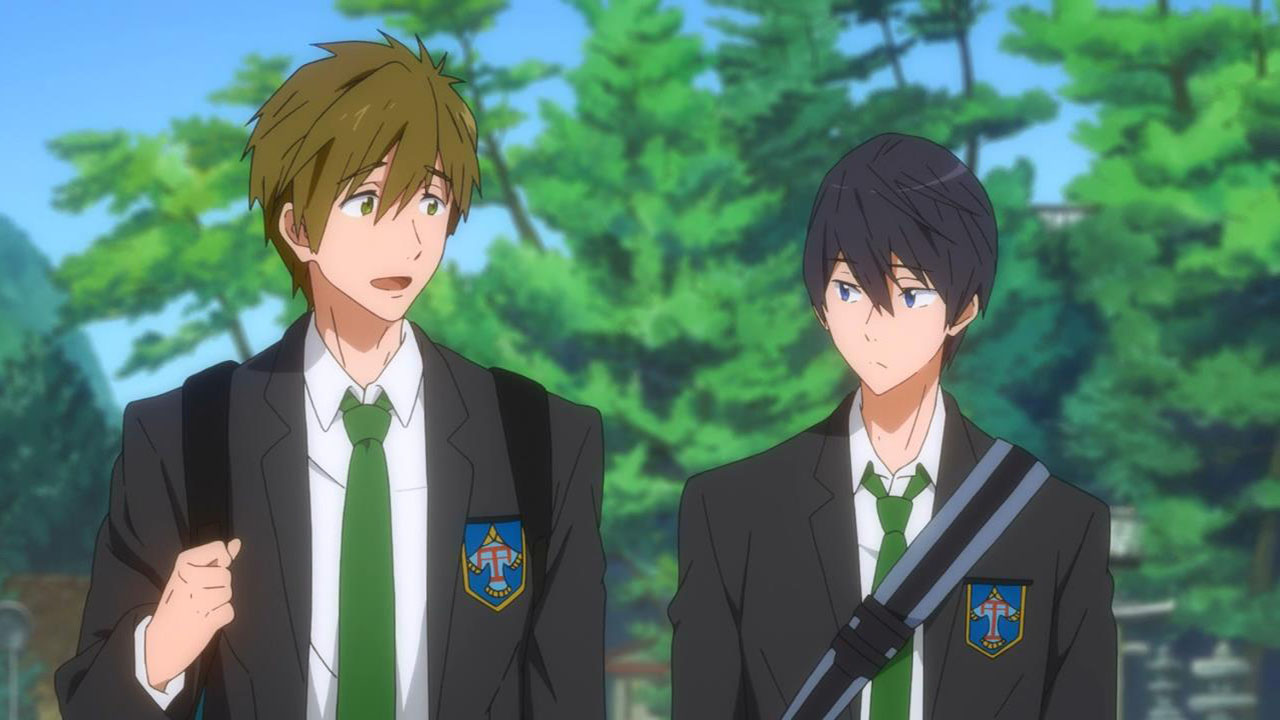 Ah yes, what kind of list would this be if I didn’t include this pairing? I mean you could argue that the entirety of Free Iwatobi Swim Club is just one big ship tease, but of all the questionable relationships, Haru and Makoto’s “friendship” takes the cake! I mean, come on, HAVE YOU SEEN THE WAY MAKOTO LOOKS AT HARU?! It’s like he’s looking at majestic unicorn sunning itself on a lush meadow… It’s like someone just brought him his favorite snack on a silver platter… It’s like the sun rises and sets on Haru’s tight little tush! Just see for yourself!

There isn’t just one moment, but a series of moments that provide a wealth of evidence for MakoHaru, but for me, the moment that really solidified it for me was the bridge scene in episode 9 of season 1… I don’t care what anyone says, that is a confession scene! Oh, and for those of you that think MakoHaru is just one-sided on Makoto’s part, think again, Haru gets this gleam in his eye when he looks at Makoto and the only other time he gets that look in his eye is when he looks at water! There is also a really fun TV Tropes page that does a episode play-by-play of all the “questionable moments” between all of the characters in the show, including MakoHaru.

*Side note: Haru x Rin just barely didn’t make the list… the only reason they aren’t on this list is because Rin has some issues to work out before he’s ready to be in a relationship with anyone…* 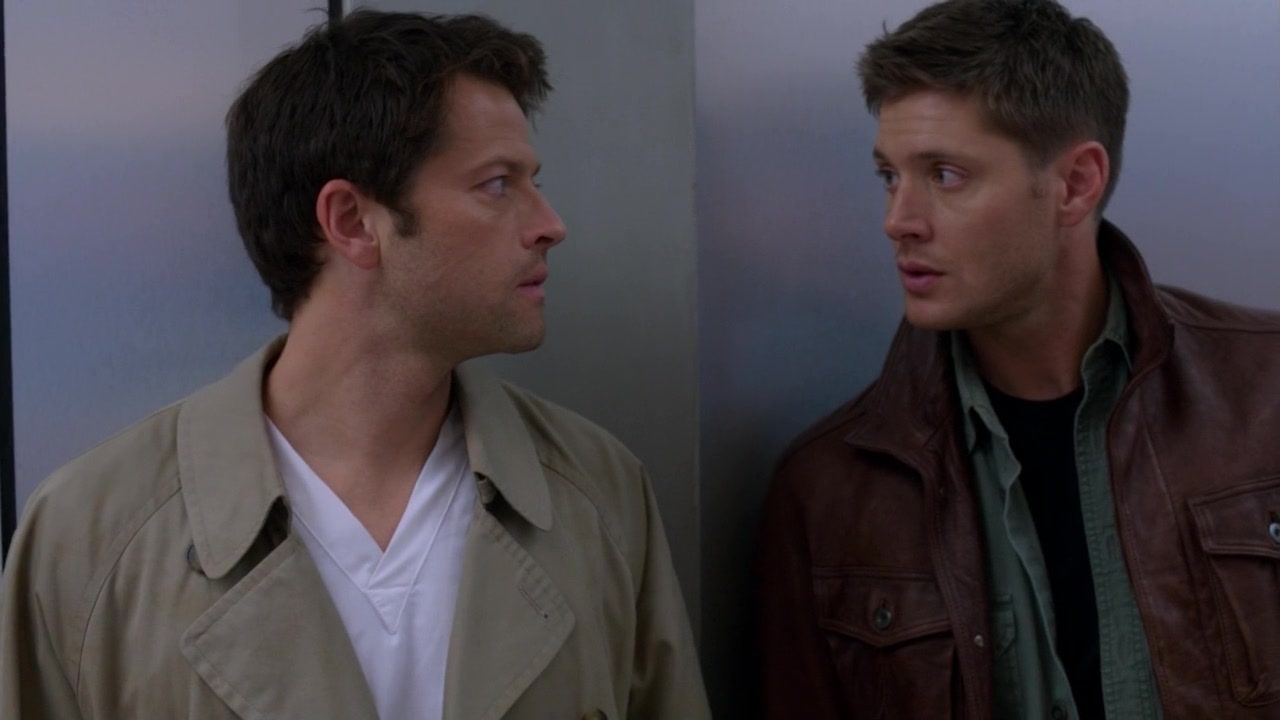 But, seriously, over the course of the series, Castiel and Dean have built a very close friendship that has come to rival the bond shared between Dean and his brother Sam. There are these intimate moments between the pair, Castiel’s lingering intense gazes and Dean’s unyielding devotion to his fine feathered friend… Dean is Castiel’s weakness, the chink in his armor that keeps him from fully devoting himself to the causes of Heaven, a fact that has been brought up by several characters throughout the series. Not to mention the way they always seem to be super close to one another during intense emotional confrontations… so close, they could I dunno… KISS!! There’s even an entire story arc where Castiel goes missing and Dean spends the entire season moping around like a sad puppy until his “friend” comes back home… to his “family”. Oh, and like the other pairings on this list, Destiel also has it’s own TV Tropes page dedicated to the ship, and it’s much longer than any of the ones I mentioned thus far…yeah, 10 seasons worth of subtext all documented and accounted for… 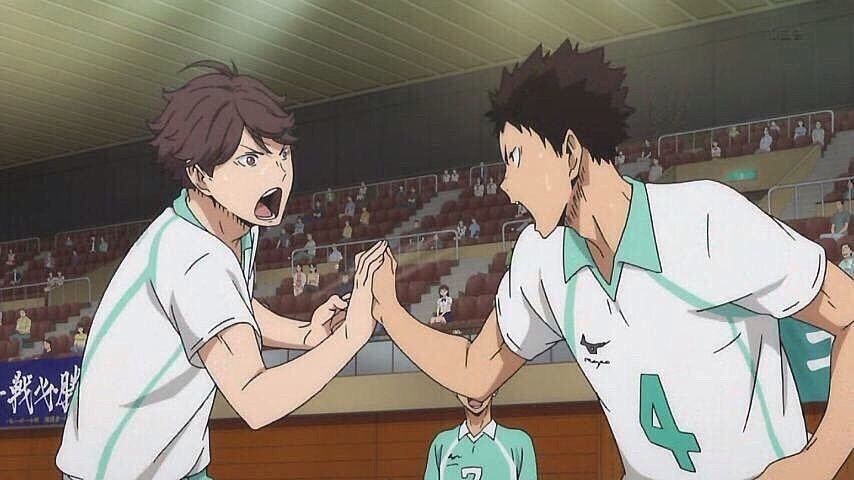 Last but not least, IwaiOi! I couldn’t write a ship post and not include at least one Haikyuu ship, and before you all say a word about KageHina, YamaTsuki, BokuAka, DaiSuga, or my beloved KuroTsuki, I stated at the beginning that evidence was an important factor in selecting pairings for this list. So, if you think that one of the above HQ ships should have been on this list, make your case in the comments section or elsewhere. But, for my list I chose IwaOi, because in my head they are the most canon ship in the entire show…

So, why IwaOi? What makes them so special? Well, they’re practically an old married couple. Not only have they been childhood friends who have been inseparable since they were practically in diapers, but they’re also the captain and vice captain of the Aoba Johsai. Then there’s the fact that you rarely see one without the other, it’s like they are a matched set or something. I could also mention the fact that no matter how annoying or downright horrible Oikawa is, Iwaizumi always stands up for him when it matters most. And he isn’t afraid to knock him down a peg either…

Whatever Your OTP is…

Yeah, it’s a cop out, sue me… But, the fact is that there are so many great ships out there who am I to restrict them to just this list?! So I want to hear from you guys, what are your favorite non-canon pairings? They can be from anime, manga, books, film, TV shows, the skies the limit!

Also, don’t be that asshole that starts ship wars because folks don’t care for your ship. The point of shipping is to spread love not hate, so if you aren’t a fan of a particular ship, it’s okay. If someone doesn’t agree with your ship, that’s cool too. Respect other people’s opinions and move on…

Those are my 5 pairings that totally should have been canon! I know, this list was way more BL than I originally intended, but I promise I’ll do do a GL and BxG list sometime in the near future.

11 thoughts on “I Ship It: 5 Non-Canon Couples That Totally Should Have Been Canon- BL Edition”