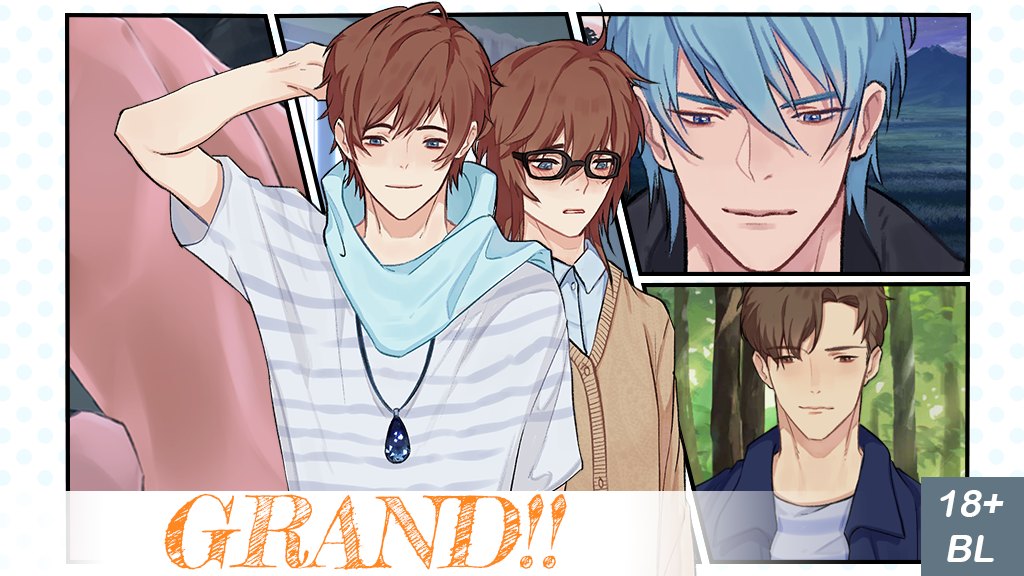 Hey hey guys I am super late with this Kickstarter campaign, there are just 9 days left to support JKU Studio’s upcoming 18+ BL romance visual novel GRAND!! I am a huge fan of BL games, so when the Neku emailed me about their upcoming game, I just knew I had to help spread the word (though granted real life decided that that was also the perfect time to knock me down a peg).

I am loving this influx of BL games from the western indie game developers and GRAND!! promises to be a fun new title. There is still time to show JKU Studios some love, but if you need a bit of convincing, I’m going to do a rundown of all the great features the team has in store for you if the game is able to reach it’s $3,500 funding goal by July 15th!

GRAND!! is an 18+ BL game that incorporates the interactive elements of traditional visual novels with the text heavy narrative style of kinetic novels, for a unique gaming experience. Take control of Elijah a college freshman, and help him navigate through his first year in the “real world”. Make mistakes, get messy, and maybe even make a few love connections along the way!

College is a place where you learn so much about yourself. You have a lot of things that become your firsts; first love, first heartbreak, and your first taste of the “real world.”

Help Elijah as he stumbles his way through his first year of college and help him decide on which “firsts” he should try. Is it going to be the kind, sincere and romantic “Gio” or the overly sexual, snobby, but secretly nerdy “Kai”?

Join Elijah as he attempts to find out exactly what it is he likes in life and in men, all while taking on the big bad world!

Elijah Grand is the protagonist of GRAND!!. He is a bit on the shy side, and the idea of starting his first year of college is a bit daunting. But when his best friends give him a miraculous makeover, Elijah has the chance to finally leave behind his nerdy persona.

This will be a commercial release, but by pledging at the $5 level, you all can snag a copy of the game for a discounted price. Upon it’s release the game will be available for Windows, Mac, Linux and Steam. The Campaign Goal is $3,500 and will run until July 15th, 2017!

There are download links for the PC version of the demo, HERE! The demo will give you guys a good idea of what to expect in the final version of the game, so if you are still on the fence about the GRAND!! or just want to see what the game has to offer give it a try.

You can also contact JKU Studio on Social Media through the following channels: