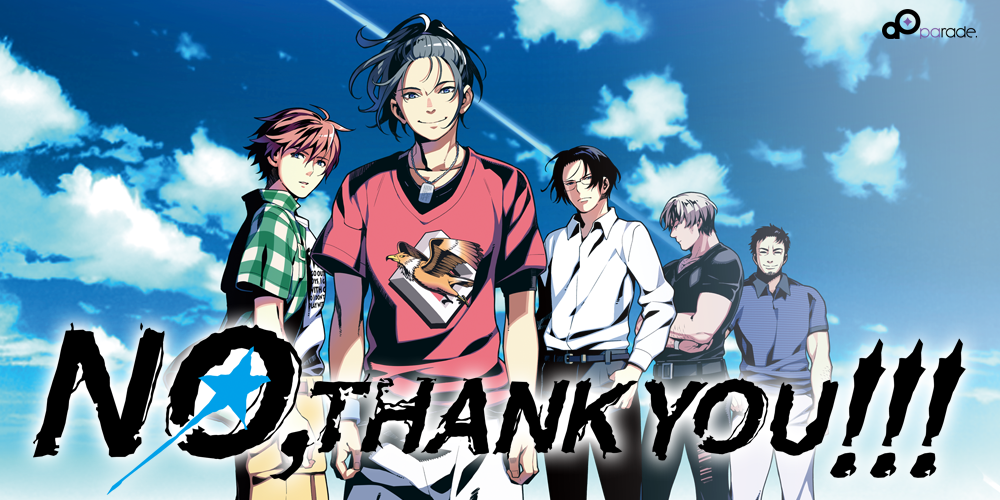 No Thank You!!! is a 2013 Boy’s Love (BL) visual novel originally developed by Parade. In 2015 the game was released in English by MangaGamer, but unlike the original release this version is COMPLETELY UNCENSORED! I repeat, completely uncensored, this game is absolutely NSFW!

No Thank You!!! Official Synopsis

This summer vacation begins with a car accident…

Our protagonist protects a man from an out of control car, but gets hit and loses his memory in the process. The man he saved happens to be the owner of a jazz bar, sótano. Out of sympathy for his hapless savior, the man decides to set him up with a job and a place to live.

From the outside, sótano looks like a cozy little jazz bar, but behind the scenes they solve problems that the police and legitimate detective agencies won’t touch. The staff there give our protagonist the name “Haru”. He gradually makes his way deeper into the organization, and the hearts and lives of the staff, while working as an apprentice bartender. But just who is Haru really…?

The story takes place over the course of an entire summer. It begins with you, the protagonist saving a man from being hit by a car. You narrowly push the man out of the way, but the car clips you instead, as a result you develop amnesia. The man, Inui, thanks you for saving his life by giving you a job at his Jazz club, and puts you up in an apartment, at least until you regain your memories. Since you can’t remember your name, the staff dub you, Haru. So begins your summer at club, Sonato, which is the front for detective agency that specializes in cases the police can’t solve. As the summer wears on you form bonds with your fellow coworkers and help solve cases, while trying to piece together who you really are.

There were a couple of scenes where I had to turn the volume down on my computer for fear that my roommates would hear it through the walls. Which brings me to the first of many nifty features of the game: Courtesy Mute. The game mutes all audio when you click off of the game screen or minimize the game window.

No need to worry about potentially embarrassing audio continuing to play when you’ve just narrowly managed to minimize the window!

Now BL gamers no longer have to worry about stray moans and groans emanating from their laptop speakers during gameplay!

Nifty feature number TWO…Body Hair Settings! Do you like your men smooth as a baby’s bottom, well now with just a click you can experience hot and hairless boy on boy action. So to be honest this is really weird, but still a really cool feature, so far this is the only game I have played with this option. You can choose to have 1) All hair on, 2) All hair off, or 3) Pubic hair only (during my first playthrough I chose to remove all body hair). 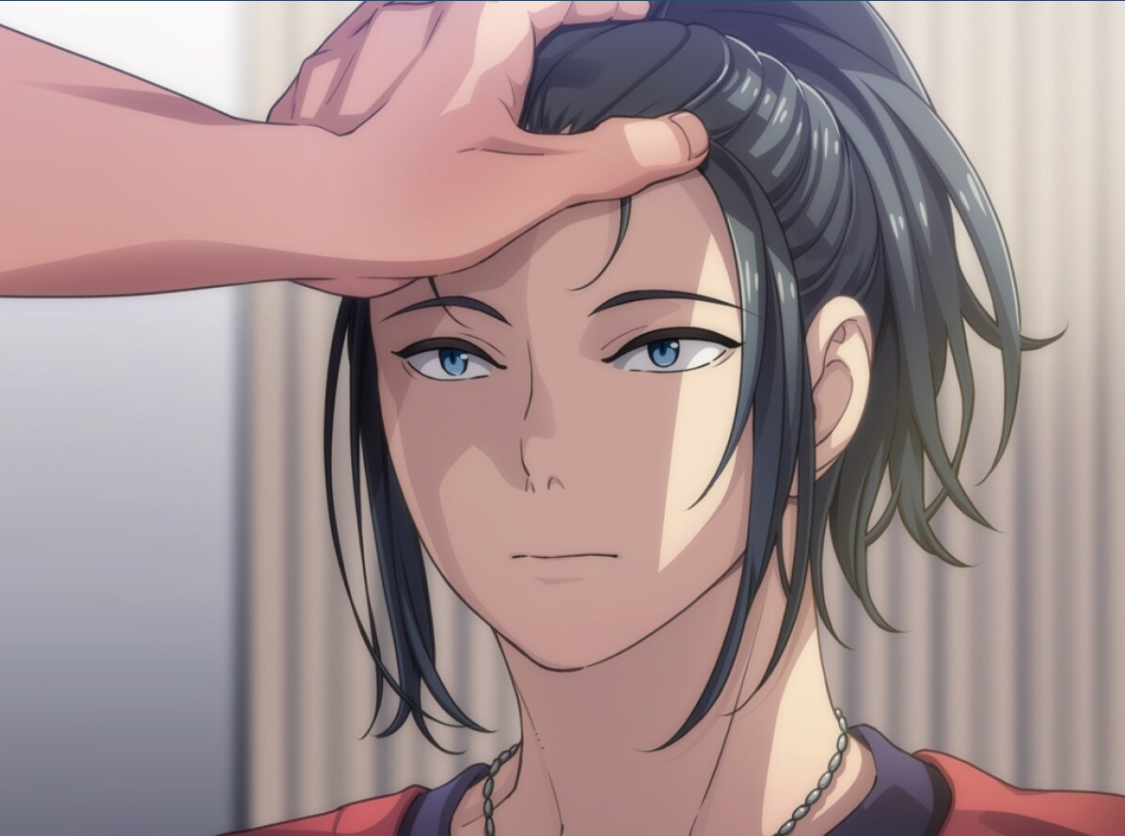 Haru is the ultimate sex-crazed seme, he doesn’t care if you are older or younger, and he’s not particularly big on consent.

He is a 22(?) year old amnesiac. He gets temporary amnesia after saving a complete stranger from getting hit by a car. As thanks for saving the man’s life, Haru is given a job at the jazz bar, Sonato, where he works as an apprentice bartender. He is an easy going guy, who doesn’t let anything keep him down. He is quick to help out others and is very intuitive, but can be very childish. He identifies as bisexual, often sexually harassing his coworkers. 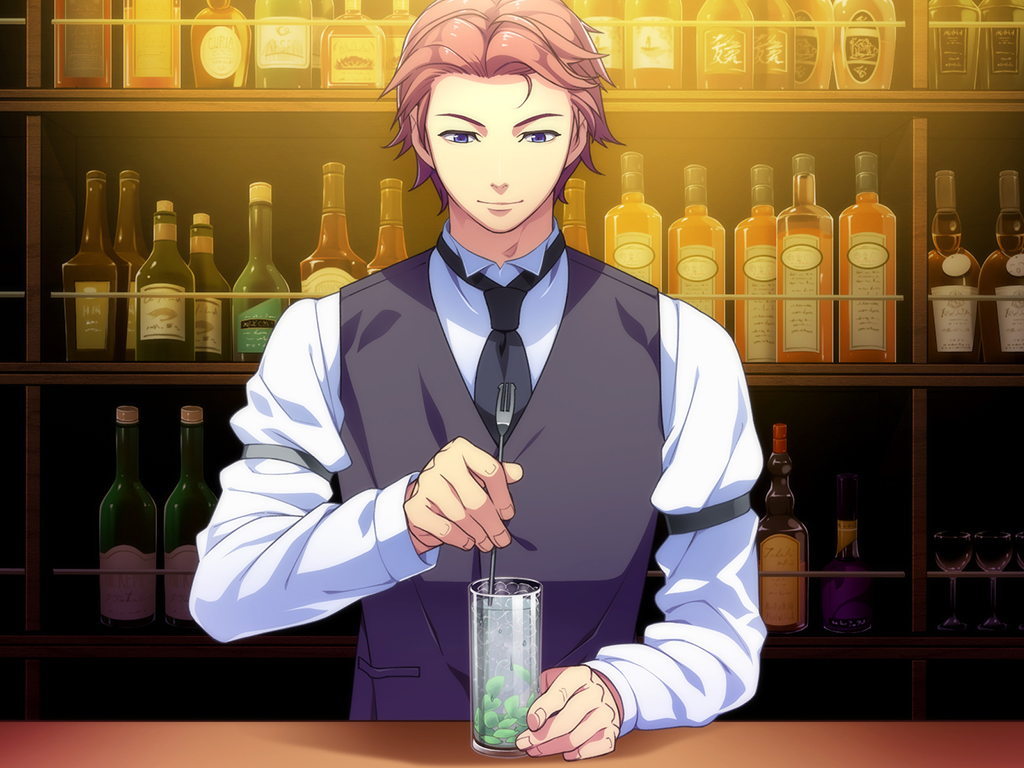 Hiroyuki is the 22 year old bartender at Sonato. He is both kind and hardworking, and if I remember correctly he is a high school drop out. He is one of the most easy going of the group, possibly due to his young age. He usually brushes off Haru’s sexual harassment, but has been shown to get flustered at the unwanted attention. At the start of the game he is a virgin, with absolutely no experience with either men or women. So he is ripe for the pickin’! He is friends with some shady yakuza dudes, but he seems like a relatively well adjusted individual. *First recommended route* 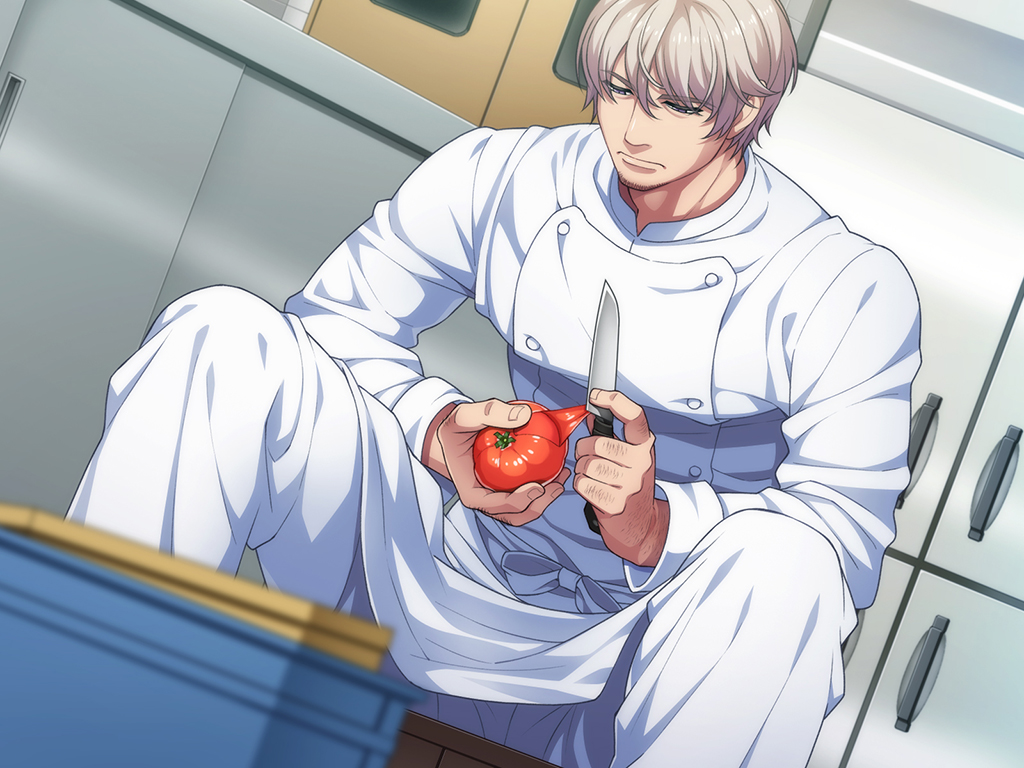 Maki is the strong silent type. He is the manager and head chef at Sonato. Haru remarks that he thinks he’s kind of slow, but what he lacks as a conversationalist he more than makes up for in brute strength and amazing cooking skills. He is the brawn of the group often called on to do the dirty jobs.

I think he might be a foreigner, but I’ve not had the chance to play his route yet so I dunno. *Second recommended route* 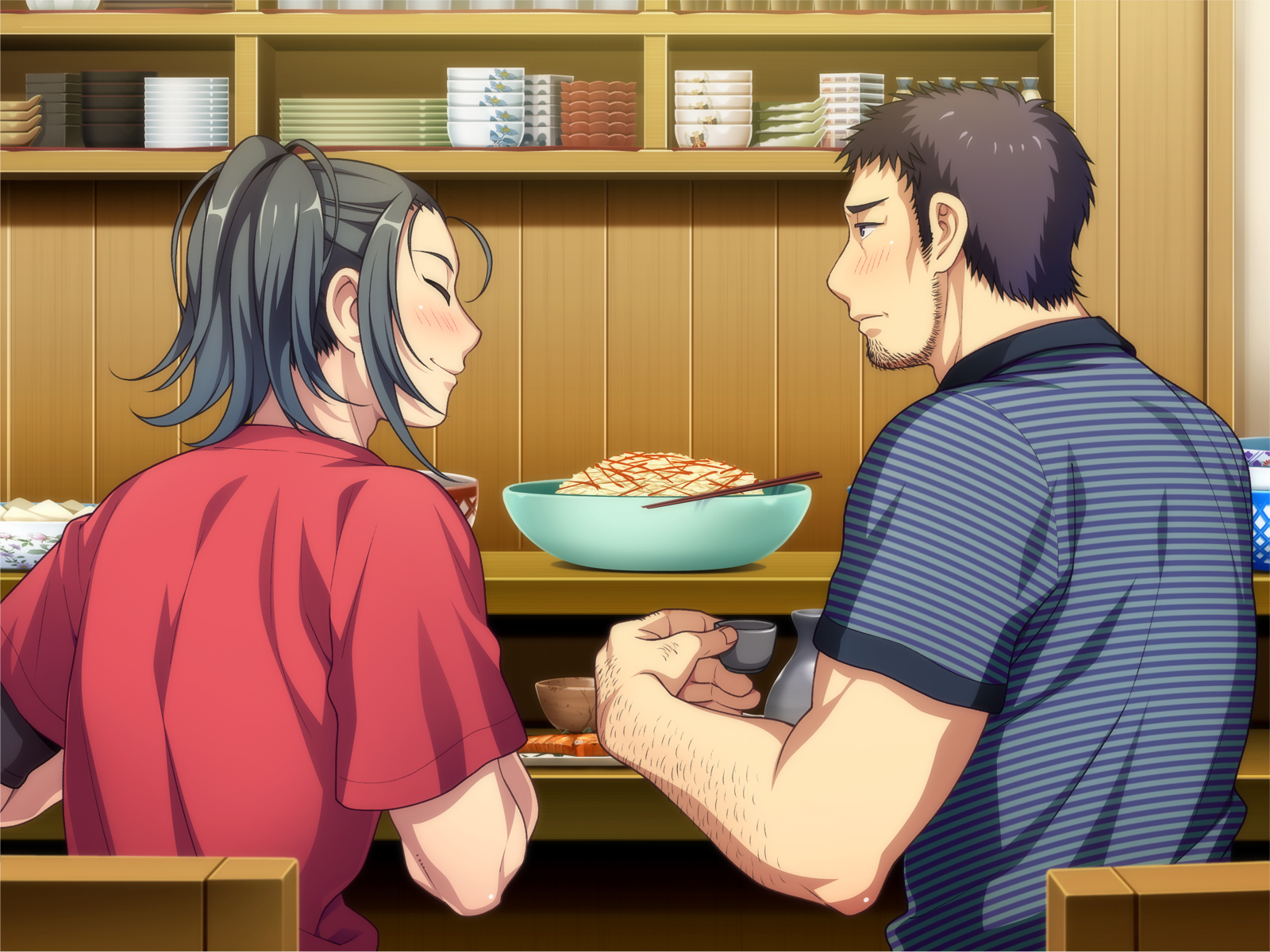 Inui is the owner of Sonato and the man that Haru saves from the hit and run accident in the beginning of the game. He is considerably older than Haru and the rest of the gang, but he manages to be good natured and kind, going so far as to put Haru up in an apartment and offers him a job after his accident. Inui owns several businesses and has several connections in both law enforcement and among the yakuza. Some of the characters think that he is ignorant of the goings on of the Sonato gang, but maybe he knows more than he lets on.*This is the third recommended route* 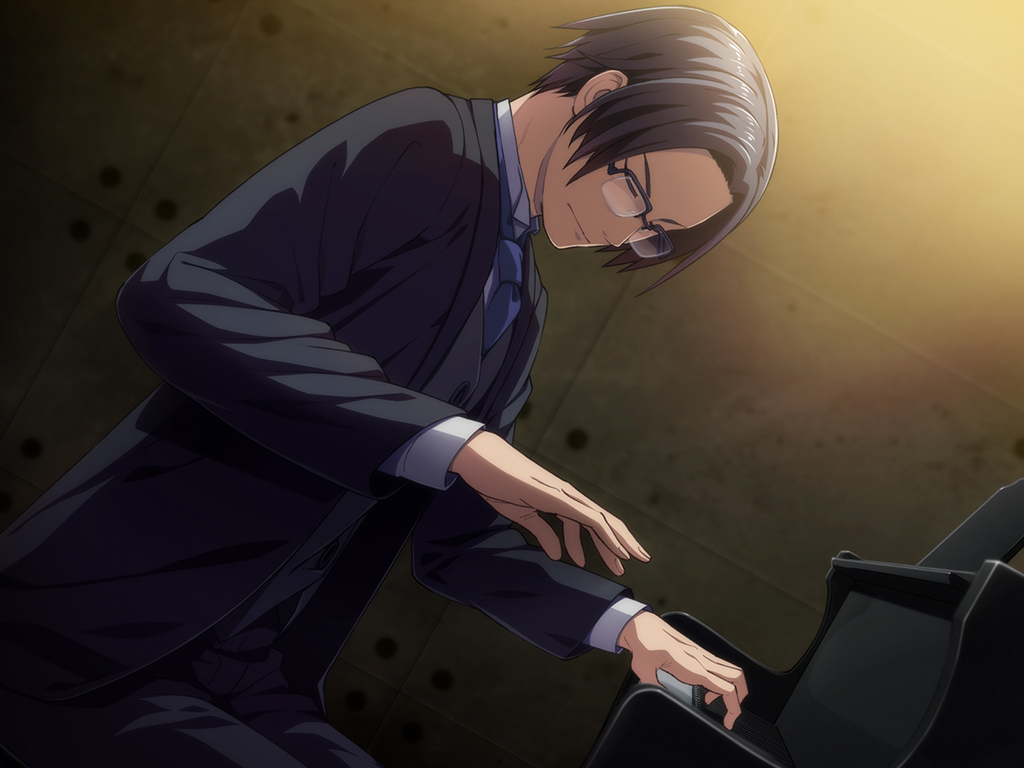 This was the first route that I played in the game. Ryu is the head bartender and pianist at Sonato. As well as the token megane character, he is also the token ice queen! Ryu is an ice cold perfectionist he rarely (if ever) humors Haru’s antics. He is quick to insult Haru or more times than not ignores him. However, Ryu has some secrets which he keeps hidden from his associates. I really liked the back and forth between Haru and Ryu. He always seems to be restraining his true self, and Haru goes out of his way to push his buttons. * He is the last route in the recommended play order*

Overall Thoughts on No Thank You!!!

So I have only played through one Route so far, this game is way longer than I expected. It took me about two months to finish the route (life sometimes gets between me and my animated men). I enjoyed the playthrough, there were no stats to raise, just reading and the occasional choice or two. In addition to the normal choices, NTY, has a few intuition based situations. During these situations a “No Thank You” button will appear on the screen, usually this means that something fishy is going on and you have to decide whether to call shenanigans on the situation in question. It doesn’t happen often, but when it does, be warned, these choices have a big impact on the overall course of the game.

The romance is almost nonexistent, seme Haru, should be a registered sex offender the way he carries on. He gropes and harasses the Sonato staff daily (if not hourly), he even goes so far as to just invite himself to the other guy’s apartments, much to their annoyance. Most of the smutty scenes occur towards the end of the game and boy are they graphic! O_O Haru is a beast, relentless sexual monster, but I admit that I liked it. Sometimes you are given options during the sex scenes, like for Ryu, you have the option to have him take his glasses off or leave them on (I prefer them on), or where to ejaculate (some of these options were amusing). I suggest saving often and playing around with the choices, you won’t be disappointed.

The endings; most characters have three endings (2 Bad and 1 good), so you really have to earn your happy ending in this one. The bad endings are really, really bad, so brace yourself, while the good endings can be bittersweet. After finishing the first route, you unlock a prologue chapter which explains a bit more about Haru before he saves Inui. This also changes the way you view the rest of the game, so choose your first route carefully. The game also activates a hint mode at this point, which will help guide you towards the right answers.

By the time I finished my first route I had more questions than answers: I still don’t know who Haru is or where he came from? What did Ryu steal? What about Inui? So confused! I’m pretty sure these things will be revealed in the subsequent routes, but I dunno if I’m ready to play the other routes just yet…I need a bit of a breather…some of the cases were just too heavy (incest, drugs, kidnappings, child abandonment).

Overall the art is lovely (thousands of CGs), sound quality is crisp and clear (fully voiced), and the plot is enjoyable. DO NOT play this game in public or around small children! I recommend this if you are a fan of BL stuff, definitely not for the faint of heart!

11 thoughts on “No Thank You!!! BL Game Review (aka Why Safe Words are Important)”