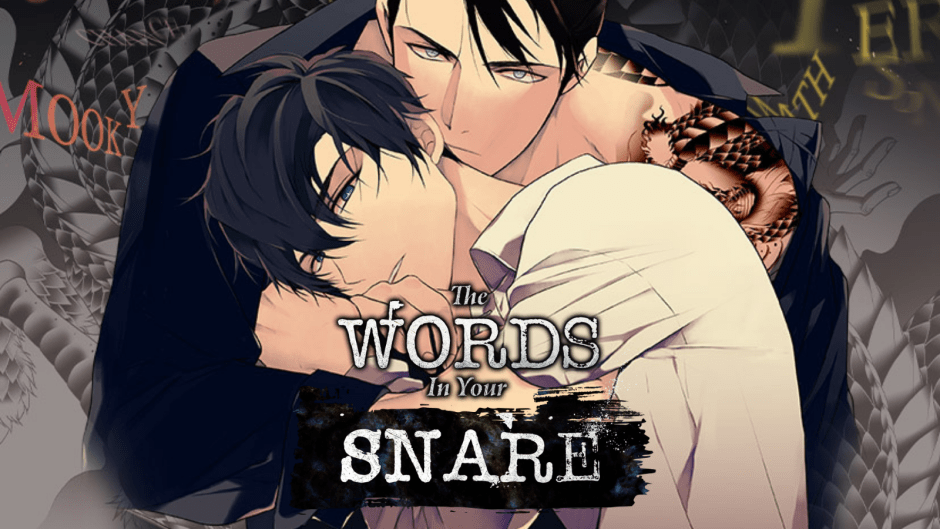 Instagram ads strike again. This time they blessed my life with the fantasy BL webcomic, The Words in Your Snare (Hyanghyeon Text) by Chepali & Aeju. Lee Jooin, a reclusive café owner with a secret ability catches the eye of the infamous gang member, Mookya. Through circumstances beyond his control, Jooin finds him himself dragged into Mookya’s dangerous world, dredging up secrets from both their pasts that threaten to tear them apart.

A recluse by choice, young café owner, Lee Jooin, has fled the hustle and bustle of Seoul to live in the countryside in peace. His peculiar ability to read people’s thoughts as text left him unable to trust or face the words left behind in his broken home. But, his peaceful new life is suddenly interrupted when a sack of drugs winds up on his doorstep. With that, he finds himself tangled up with an unusual new customer, the right-hand man to the infamous Sa Gang, Mookya. Besides Mookya’s adorable quirks, there’s one thing about him that Jooin can’t ignore; the fact that he can’t see Mookya’s thoughts.

As both of these mysterious men become more and more infatuated with each other, their hidden pasts begin to unravel and they find their social circles overlap more than they realized. But, how long before they are torn apart by the words they never wanted the other to hear?

The Words in Your Snare Review

I am obsessed with The Words in Your Snare. As of this review there are 35 chapters available. In one day, I devoured each one, and then went back and to re-read the entire series. It’s that good! The Words in Your Snare follows Jooin, a quiet unassuming café owner with a sort of synesthesia–he can see the thoughts of those around him as words. His ability is more than a little inconvenient, so he leaves the hustle and bustle of the big city for the peace of the countryside.

Jooin is happy in the country, and everything seems to be going well for him with his café. Unfortunately his peaceful life is disrupted when he is unwittingly dragged into a drug deal gone wrong. When a bag of drugs are mistakenly delivered to his humble café instead of his usual coffee order, Jooin finds himself crossing paths with Mookya, the right-hand man of the Sa Gang. Despite his imposing demeanor and infamous reputation, Mookya has a surprisingly cute side. But, what captivates Jooin most about him is that Mookya is the only person whose thoughts he can’t see.

For the first time in his life Jooin has found someone he can let his guard down around. Despite his better judgement he follows Mookya back to the city. But, life in the city is full of dangers and Jooin soon finds that secrets he thought he’d long since buried are now coming back to haunt him, including the brother he’d long since cut ties with. As his relationship with Mookya deepens, Jooin finds his past and present colliding in a dangerous way.

The Words in Your Snare is a lot to take in; criminal enterprises, magic powers, romance with a dangerous man, and regretfully an incestuous brother (why is it always brothers?!). It’s messy and problematic, but there’s something captivating about it that kept me throwing my tokens at new chapters; if not to see what was going to happen next. This series is WILD, but not for the reasons you might think!

At first The Words in Your Snare seems like another run of the mill, “normal guy gets tangled up with a dangerous man” story we’ve seen a thousand times before. But, as you delve into the series it becomes apparent that Jooin’s life hasn’t exactly been a cake walk. He has his fair share of secrets, and his past is not so squeaky clean. Prior to moving to the country, Jooin used his abilities to assist the police with interrogations. Jooin is surprisingly street smart and at one point takes out an armed murderer singlehanded.

Despite Mookya’s imposing appearance, Jooin isn’t afraid of him, openly teasing him and rebuffing his advances. Jooin’s abilities are interesting too, I’ve seen mind reading through touch in series like Cherry Magic, but being able to actually see people’s thoughts as words is new. I also like that Jooin collects some of the thoughts so he can surround himself with good vibes. The circumstances around his powers are still a mystery, and we still don’t know why he can’t hear Mookya’s thoughts. I have my theories, but I’ll keep them to myself for now.

For his part, Mookya was an even bigger surprise. I expected him to be a more like Asami from the Finder series, ruthless and absolutely toxic. But, honestly, Mookya is a delight! He is immediately interested in Jooin, but rather than forcing him into a relationship. Mookya respects Jooin’s boundaries and actually tries to woo him. He sends Jooin cute text messages, and goes out of his way to shower him with gifts. At one point driving four hours to bring Jooin sashimi, just because he mentioned it was his favorite food. Mookya is super sweet for a gangster and kind of reminds me of Soryu Oh from Kissed by the Baddest Bidder. I’ve said this before and I’ll say it again; there is nothing sexier than consent! The relationship between the main leads is surprisingly wholesome, and kind of tempers the darker and edgier elements of the story.

Of course there are rivals, one of which is Jooin’s blood related younger brother. There is no ambiguity, Jooin’s brother absolutely wants him in that way. There are two scenes in particular that were hard to get through, both depict the brother attempting to force himself on Jooin. Thankfully, they’re both brief and the brother keeps it in his pants for the remainder of the series (up to chapter 35). The second rival is Eugene, the “American” step-brother of Jooin’s cop friend. He’s more of side character than a “rival” in the traditional sense. I only bring him up because he has similar abilities to Jooin. Eugene can read the thoughts left behind on inanimate objects, so he is occasionally brought in by the police to help with cases.

The Words in Your Snare does take some dark turns. Mookya and Jooin find themselves in and out of Seoul’s criminal underworld. Jooin and the police are investigating a series of underworld murders that may be connected to a new drug and Mookya’s Sa Gang. While looking into the incidents, Jooin finds himself in more than a few dangerous situations, so expect drug references and violence in the story. Sexual assault is also depicted in The Words in Your Snare. Though it’s not graphic and it’s exclusive to a flashback chapter (Mookya isn’t involved).

All sexual encounters with Mookya are consensual. I love that Mookya waits until Jooin agrees to date him before initiating a sexual relationship with him. The sex scenes are *chef’s kiss*, though the censorship is of the lightsaber variety–so expect glorious glowing peens. Mookya is tatted up and ya’ll it is a sight to behold. Daddy Mookya has a pierced peen and my only regret is that the censorship does not allow us to view it. But, if you don’t want to see dueling lightsabers in the bedroom, The Words in Your Snare does have a 16+ version. This version carefully cuts out the smut without effecting the story too much.

All in all, I LOVE, The Words in Your Snare! I have been looking for something good to occupy my time between updates of Painter of the Night and this series has me captivated! Sure the icky brocest is unfortunate blemish on what is an otherwise perfect series. But, the relationship between Jooin and Mookya more than makes up for it. I love their chemistry and how despite their differing circumstances they still manage to find comfort in one another. I’m a sucker for a good mystery and The Words in Your Snare has more than a few secrets left to be uncovered. I’m in it for the long haul with this one, and I can’t wait to see what the future has in store for Jooin and Mookya.

Where to Read The Words in Your Snare

4 thoughts on “The Words in Your Snare Webcomic Review”