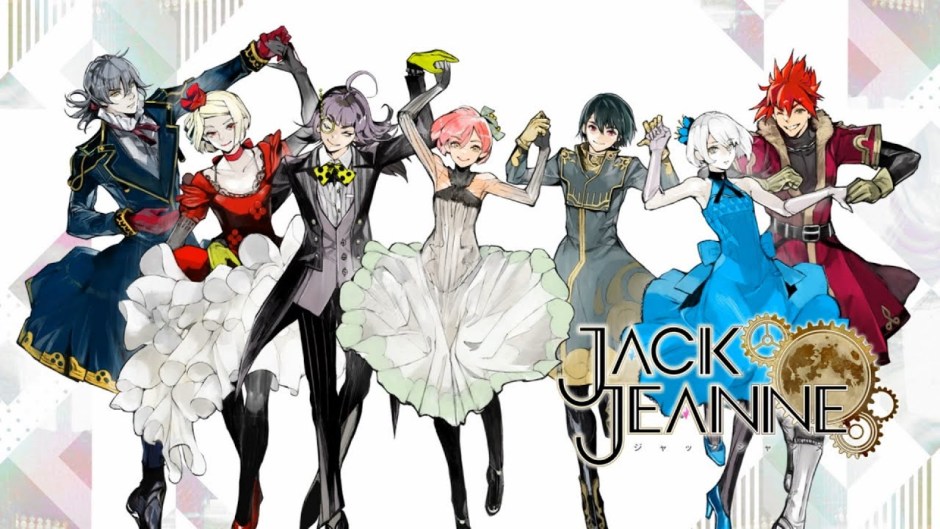 By now most of you have heard the good news: We’re getting another surprise otome localization! During the JACK JEANNE anniversary livestream, Broccoli announced that they are planning to release Jack Jeanne for the Nintendo Switch in both English and Traditional Chinese! The news was further confirmed by a tweet from the official Jack Jeanne twitter account, though an official release date has not been announced. There have been rumors about a possible English language release for awhile now and to have it finally confirmed is huge news!!

Tamasaka is an opera troupe consisting only of men, who also play women. The troupe owns the Univeil Opera School, which raises actors while putting on performances. Every performance invites the audience to an overwhelmingly flashy world and never fails to keep their attention.

The talented students of the hard-to-enter school are broken up into four classes to study theater, as well as compete for the title of Top Class at Univeil.

The protagonist, Kisa Tachibana, who had given up on a life of theater, receives special permission to attend Univeil Opera School following a certain event as long as she fulfills two conditions.

One of those conditions is to star in the final performance at the end of the year.

To make her dreams come true, and to help her pupils, the protagonist will deepen her bonds with the classmates that become her “cogs.”

What future awaits the protagonist after spending the year with her classmates…?

For those of you unfamiliar with the game, Jack Jeanne is a rhythm/simulation otome game from Broccoli and Tokyo Ghoul creator, Sui Ishida. The game centers, Kisa Tachibana, an aspiring actor who has all but given up on a career in theater, that is until she receives an invitation to attend the prestigious Univeil Opera School. There’s just one catch, she’ll have to conceal that she is a woman (so Kenka Bancho Otome, but with acting) and work her way up through the ranks to star in the final performance at the end of the school year. To achieve her dream, not only will Kisa need to foster relationships with her fellow classmates, but also players will put their skills to the test in interactive rhythm game segments. While Jack Jeanne is an otome game, the romance from what I’ve read is a bit on the light side, with the story focusing more on the characters as they prepare for performances.

The heroine of the game, she hides the fact that she is a girl and enrolls into Univeil Academy. Her older brother is acting prodigy, Tsuki Tachibana (big thanks to Vki for the help with the Kanji on this name). Kisa possesses the potential to play both Jack (male) and Jeanne (female) roles. For the sake of her dreams and to bring victory for the Quartz group, Kisa takes on the role of a “cog”–someone able to move the hearts of people.

Noteworthy among the other Jacks, Kai has earned the title of Jack Ace. He’s formed a pair with Sarafumi Takashina, and considers it his main role to support Al-Jeanne, Sarafumi. He is quiet and prefers to spend his time alone, though he always looks out for his fellow Quartz classmates and will always lend a hand to those in need. It seems that Kai is always thinking about what he should be doing to fulfill his role as Jack Ace.

Due to his showy nature and dancing ability, Sarafumi has been given the title of Al-Jeanne, the star among the other Jeannes. Because of this he is seen as the face of the Quartz class. He hates stuffy formalities and is always seems relaxed but in reality, he has a sharp intuition and is very observant. During his first year, he formed a pair with Univeil’s legendary Tachibana Tsuki and they shone brightly upon stage. That experience is now a darkness growing in his heart.

The leader of the Quartz class. Kokuto is a genius that can not only play both Jack and Jeanne roles, but also directs and writes the scripts of the Quartz class’ shows. He’s eccentric and in order to create amazing productions, he often subjects the Quartz students to his shenanigans. The way he utilizes his skills and throws himself into his duties can sometimes seem reckless.

Because of his feminine appearance and has a high-ptched singing voice, Mitsuki is known as the Jeanne songstress of the and the Quartz class. He doesn’t think much of acting or dancing but when it comes to his specialty- singing- he works hard and doesn’t cut corners. He is very individualistic, and doesn’t take an interest in others, however but his guidance is always precise.

Kisa’s classmate, Suzu is a Jack whose cheerful disposition draws attention from others. Suzu decided to enroll into Univeil to follow in the footsteps of legendary Jack Ace, Tachibana Tsuki. The life of his class, he can strike up a conversation with anybody without fear or shyness. He does have a tactless side to him but he works hard everyday to become a Jack Ace like Tachibana Tsuki.

Kisa’s classmate who originally enrolled with the hopes of being a Jack but was selected as a Jeanne. Soshiro is Kisa’s childhood friend and when they were little would often play pretend with her and her older brother. He knows the truth behind Kisa’s enrollment at Univeil and her true gender. He is very passionate about theater but struggles to express himself and often hides in Kisa’s shadow.

Thoughts on the JACK JEANNE News

UtaPri fans are already familiar with Broccoli, and while I never jumped on that bandwagon so this will be my first time playing any of their games. I’ve also only seen a handful of episodes of Tokyo Ghoul, so my experience with Sui Ishida is also fairly limited–though some of the character designs look like they’d be right at home in Tokyo Ghoul. But, that said given all the hype surrounding JACK JEANNE, I’m excited to give the game a go when it is released. I did see some confusion about whether or not this was an otome game, mainly due to initial marketing downplaying the romance elements of the game, but I have been assured that this is indeed an otome game.

JACK JEANNE does have stats-raising and rhythm game elements to it, and I’m usually not a fan of those types of games because I suck at them (seriously, I’m all thumbs). The only stats-raising game I actually enjoyed being Storm Lover Kai. But, despite my reservations about stats-raisers, I am excited to see something a bit different from the usual visual novel styled otome games making their way West and hopefully if it does well, we may get more games like it in the future.