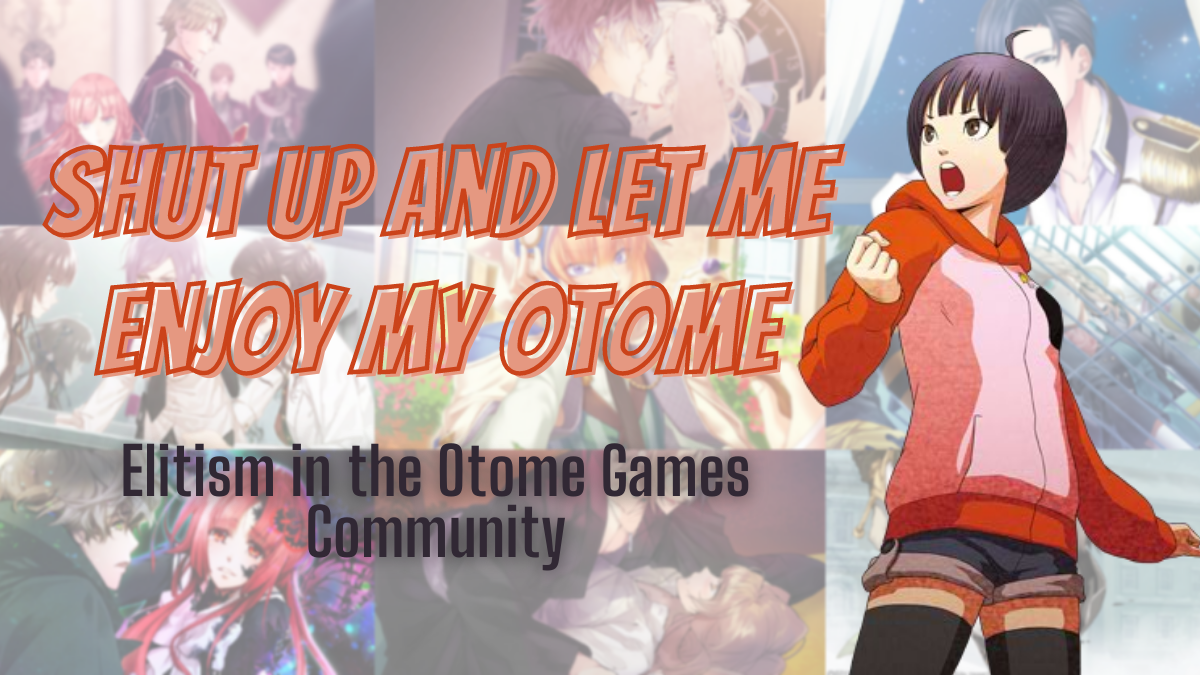 Elitism in the otome games community has been the bane of the fandom since the beginning and I’m tired of folks bashing otome game localizations and Western fans of the genre. It seems like every time a new otome game localization is announced, folks who have played these games in the original language seem to crawl out of the dark recesses of the internet to find fault with the as of yet UNRELEASED localization. As a Western otome fan who doesn’t have a working knowledge of the Japanese language these new localizations give me and others like me a chance to experience otome games that otherwise we’d never get a chance to play.

I usually stay out of the otome discourse, because fandoms can be toxic and as a grown adult woman, I have bigger things to worry about than arguing with folks on the internet. But, with the increase in new otome game localizations the elitism that permeates the otome fandom has reached an all time high and I’m just sick of it! So, today I want to share my thoughts on elitism in the otome games fandom from the perspective of a Western fan who is fed up with all the BS.

So first off, check your privilege at the door–I am not here to entertain trolls. If you don’t agree with me, fine; everyone is entitled to their opinion, but I will not abide by personal attacks or bullying–you will be blocked.

To understand elitism in the otome games fandom you first have to address how these sentiments came to be and that has its roots in otome games being a niche genre. Otome games are created for a primarily Japanese female audience and let’s be real, that’s a very specific target demographic. And there was a time when the only way someone outside of Japan could enjoy an otome game would be by learning Japanese and importing titles. So, many otome fans in the West did just that. Through dedication and self study many of the OG Western otome fans taught themselves Japanese so they could enjoy the games they love.

The fandom wasn’t huge, just a few people with the knowledge and the means to consume otome games, but it was like they held the key to this magical realm that fans like me could only dream of catching the merest glimpse of… they were the gatekeepers of the otome fandom and in their benevolence they would share their knowledge with those of us either unwilling or unable to learn Japanese on our own. Detailed reviews and game breakdowns were the norm and I, like many here in the West, lived for the newest game reviews because it was  the closest I was going to get to consuming anything otome related. These early fans were ambassadors of the genre and it was through them that many Western fans were introduced to otome games in the first place.

But as times changed and localizations made otome games much more accessible to Western audiences, the genre ceased being the exclusive club it once was—now, literally anyone who wants to can play otome games. Dedicated localization teams at companies like Aksys Games ensure that there is a steady stream of new games for Western fans to consume. I imagine it might be difficult for OG otome fans to hand over the otome torch to just anyone, especially when they feel that their beloved otome games aren’t in capable hands. And I will admit that not every otome game localization has been “perfect”, but there seems to be a disproportionate amount of hatred towards otome game localizations, especially from those claiming to be true fans that goes beyond simply being protective of the genre.

It really does feel like fans that only consume otome games in English are somehow considered less than when compared with fans who play the games in Japanese. Hell, I’ve even seen some folks saying that Western fans are ruining the genre because we just accept whatever games localization companies give us, regardless of quality–and that simply isn’t true! Every time a new otome game localization is announced it seems like half the fandom is happy about it and the other half is grumbling about how the translation is going to be bad. And what’s worse is that the folks spearheading the localization bashing are the so-called “True Otome Fans”—the folks that have ALREADY played the game in Japanese.

I’ve said this before and it begs repeating: Localizations AREN’T necessarily for folks that have played the game in its original language, rather, they’re for folks who aren’t able to consume a game in its original language. The purpose of a localization is to make games more accessible to a wider audience. More people playing localizations means greater awareness and greater awareness means more companies might take an interest in localizing more games in the West. It’s okay to be protective of something that you’re passionate about, but not to the point that it stands in the way of progress.

It’s my right to decide how I consume my media and I don’t need anyone telling me the “best” way to do a damn thing. Just because someone is able to play an otome game in Japanese doesn’t invalidate my thoughts or feelings and I am tired of folks telling me that Western fans are just “settling” for scraps. What gives anyone else the authority to tell another person what they should or shouldn’t do with their time or their money? Not a damn thing! You are not the otome police. You don’t get to control how people consume their otome games. Instead of putting all of your energy into bashing Western fans and localization, how about you do something positive, like create a localization survey. Use your so called wealth of knowledge and years of experience to help newer fans learn how to talk with these localization companies about their grievances. Don’t just deride people for “wasting money” on “subpar” translations.

There is this huge divide in the otome community and it’s only getting bigger everyday. Otome games are too niche a genre for us as fans to be this divided. We should be working together to make games more accessible to everyone. So, to all you folks out there that think you’re helping the fandom by flooding our social media feeds with negativity every time a new otome game localization is announced, please… SHUT UP and let me enjoy my otome games!

Follow Blerdy Otome for the latest news and reviews!

12 thoughts on “Shut Up and Let Me Enjoy My Otome: Elitism in the Otome Games Community”