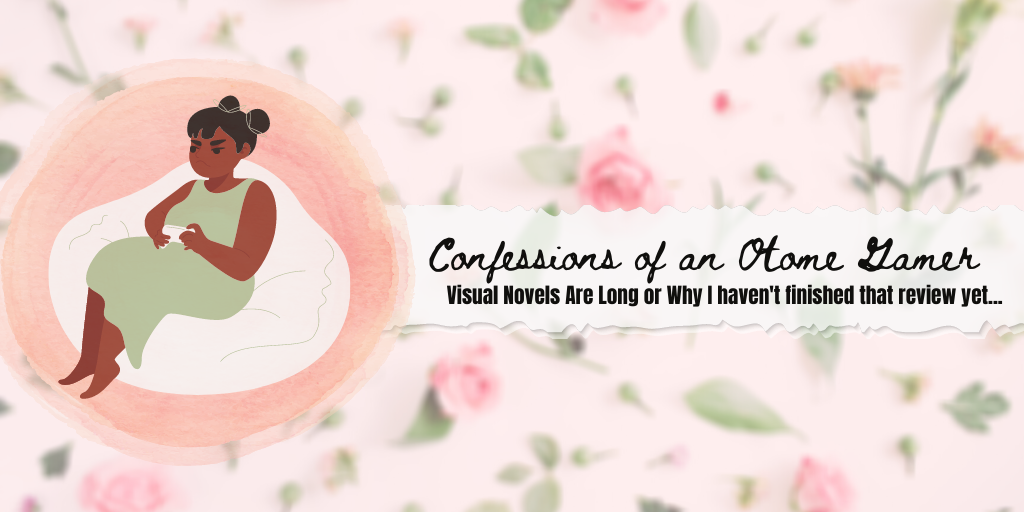 Blerdy Tribe, I’ve been rather inactive lately and for that I apologize, but real life got kinda hectic for a while there and I just didn’t have the time or the energy to read through 100k+ visual novels. I’m human. But, that brings me to something that I have been meaning to talk about on this blog for a very long time—visual novels are long af!

You’d think that’s a given, I mean they’re called visual novels for a reason. But, time and time again I underestimate just how much time I need to finish a visual novel (or an otome game for that matter). I know some folks who blaze through games in about 2 days and I am always in awe of their speedy playthroughs, but I just don’t operate like that—especially if I plan on writing a review. I take my time, dragging out my playthroughs for weeks (sometimes months) to ensure that I get the full scope of the characters and the story—or at least that’s what I want you all to believe.

The truth I’m afraid is a lot less noble, in fact I will be completely honest… sometimes I’m just not in the mood to play a game. Most of the games I cover are visual novels and they can be pretty lengthy (and repetitive) so I will admit to needing a few breaks, especially if the game I’m currently playing is especially dense—like Mizuchi which I’ve been plowing through for the past two weeks. Yes, you read that right two weeks. It’s not that the game is bad, far from it, but after a long work week I just don’t want to do much of anything that requires me to think critically, and that includes playing games.

So I take breaks. I do something else, which in this particular case has been reading boys love manga. Because despite being a game review site, Blerdy Otome has and always will be beholden to my fanciful whims and moods—which happens to include a hell of a lot of boys love manga and if you follow me on Instagram (read: you should totally follow my Instagram) you’ll know I have quite a few sitting in my TBR pile. They’re quick reads and I can usually bang my thoughts out pretty quickly, so when I need filler reviews, I tend to fall back on those. But, even then I’m still making steady progress on my backlog of games—I just need a bit of a break from some of my longer game playthroughs—a change of pace.

Sometimes we as reviewers get so caught up in getting a review done that we don’t enjoy what we’re playing. And after 5 years of running this site, I’ve been there DONE THAT and it burned me out. So, while I won’t be the first person to have a review out and I most likely won’t ever have 20 reviews a week coming out, you can be sure that when I do write a review that I made damn sure I enjoyed the game. So, thank you all for your patience and for your support and as a show of good will the next few game reviews I’ll be putting out are Mizuchi, The Light at the End of the Ocean, and Love Spell: Written in the Stars.