Being stuck at home for what is going on five months has been great for my TBR list (my gaming backlog not so much), so I’ve been on a bit of a manga buying spree. Granted almost all of my new buys have been BL manga, but lets chock that up to the boom in legitimate boys love releases and not on my status as a self-proclaimed fujoshi.

Secret XXX follows Shohei a college student whose mother is a vet and his father is a zoo keeper so their house is filled with all types of exotic animale. But, Shohei’s favorite animals are cute and fluffy bunnies, there’s only one catch… he’s seriously allergic to them, but, that doesn’t stop him from volunteering at a local pet shop that specializes in bunnies. There he meets the owner Itsuki Mito, who is just as sweet and kind as the fluffy buns he cares for and it’s not long before Shohei finds himself catching feelings for him. But, if Mito finds out about Shohei’s allergy there’s no way he’ll let him keep working at the shop… so Shohei hides the truth and spends his days working side by side with Mito.  Sounds wholesome right? Well, it is!

The main pair is super sweet—Shohei is just super genuine and cute and Mito, while much more mature, isn’t overly pushy or impulsive. Mito doesn’t pressure Shohei into a relationship and despite being a bit on the inexperienced side, Shohei can be pretty stubborn. They are on equal footing from start to finish; there are plenty of instances where they support one another and when obstacles arise, they talk through them like ADULTS! It’s a surprisingly wholesome relationship and while they do have sex quite a few times in the volume, there aren’t any ickle consent issues like you see in the majority of BL media. The sex scenes are pretty steamy (and surprise, surprise uncensored) and pretty well spread out between the chapters. Sex isn’t the end all of their relationship, and more a physical manifestation of their feelings for one another. 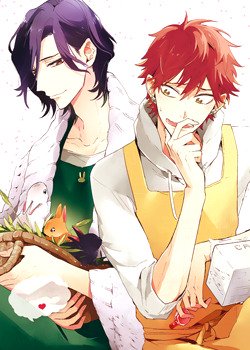 While the story mostly revolves around Shohei and Mito’s relationship, I really like that Hinohara takes the time to flesh them out as characters—we learn a bit about their pasts, we see them interact with family members and friends. They have lives outside of their relationship and I really appreciate getting to experience that. Some of the side characters were pretty fun, like Mito’s interfering younger brother Minato (one of the protagonist of Therapy Game) and Shohei’s whole family (his brother is also a major player in Therapy Game), and that more than anything gives the story more depth. And who could forget the cute bunnies!! OMG, if you need one reason to pick up this volume, do it for those cuties… they steal every scene they’re in!