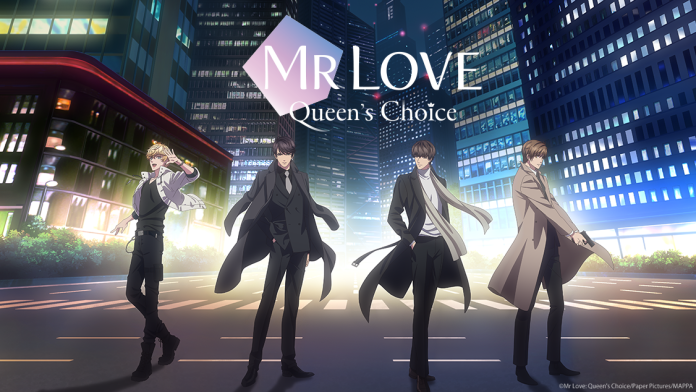 Mr. Love gives you the opportunity to text, chat and even call the main characters while developing your own career as a media producer. In the game you play as a media producer trying to save your failing production company—fantasy and romance collide as you become involved with four men, each with a secret of their own. With each new episode you uncover the truth behind the mystery, unveiling an immersive story.

Full disclosure, I downloaded the app and played maybe 2 episodes and then dropped the game (because I can’t keep up with mobile games), soI have a very basic knowledge of the game and it’s premise—so what I’m saying is I’m no expert on Mr. Love. I went into this first episode practically blind, so forgive me in advanced if I bring up something that is explained in the game.

So, right off the bat, Mr. Love faces the same issue many anime adaptations of otome games have—trying to condense several branching storylines into one linear narrative. Some have been marginally successful, Code Realize did a pretty solid job of sticking to Lupin’s route while also giving the other love interests a reasonable amount of screentime AND telling a story that folks unfamiliar with the source material could follow. But, then you have adaptations like Norn9 or worse OZMAFIA that fail to capture the full scope of the stories they’re adapting. So, going into episode 1 Mr. Love: Queen’s Choice I was fully prepared for some indication of whether this was going to be a “good” adaptation or one the “bad” ones. And, I’m not sure just yet. There were some things I liked, and some… not so much.

The episode starts with the Heroine as a child (the anime carries over the nameless protagonist trope from the game), she is seconds away from being hit by a car when an unknown boy seemingly stops time and saves her. The episode then moves forward to present day where we our heroine is running late for work (a common protagonist affliction). It is revealed that she inherited her father’s production company Miracle TV and is now working to boost the ratings of her network or risk loosing the company her father worked so hard to create. Her company’s bread and butter is a show called Miracle Finder, an in-universe Unexplained Mysteries that focuses on bizarre and unexplained stories—but it’s been seeing a decline in viewership. So she sets out to find new talent for her show. 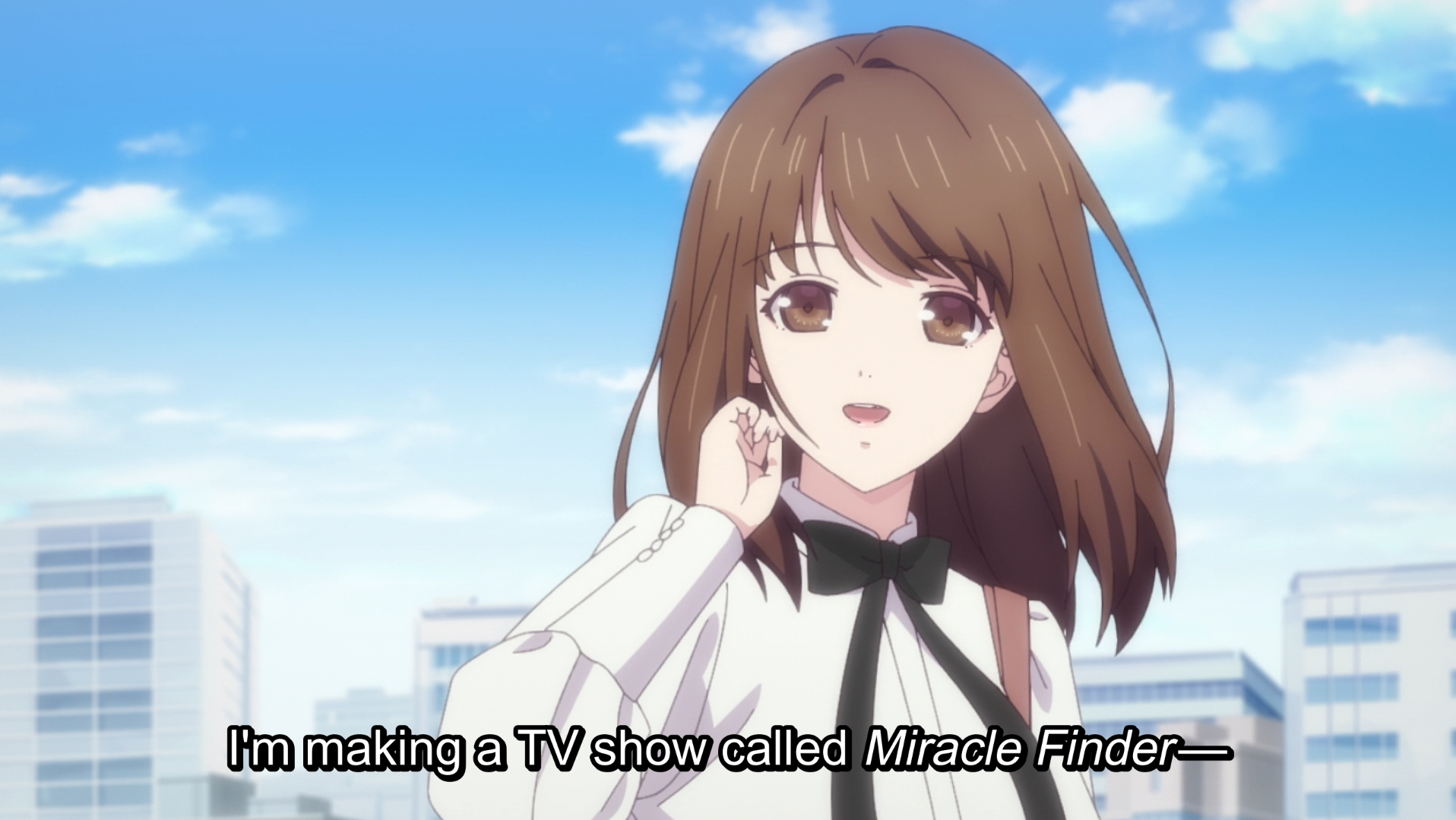 On one hand, this is a story about a young woman trying to save her failing production company, but Mr. Love takes things up a notch by introducing a sci-fi element—in this world there are people with supernatural abilities known as Evolvers. Think My Hero Academia, as these abilities are a result of a genetic quirk that manifests as superpowers, except these individuals live in secret. Early on in the episode she has a chance encounter with a pop star, Kiro who hints that he may have the ability to entrance people and then she meets with Dr. Lucien, a renowned scientist who specializes in Evolvers… and she even encounters a Victor, who saved her (again) from being hit by a car by stopping time. The episode establishes that Evolvers aren’t common knowledge, and yet more than one of them use their abilities in PLAIN SIGHT of normies and no one bats an eyelash.

The first episode drops a LOT on us without giving the viewer much time to process any of it—the Heroine has a floundering production company and their biggest backer is threatening to pull funding, but wait, there are these superpowered humans running around the city, BUT WAIT, someone is targeting the heroine’s life… AND THEN we can’t forget to introduce the love interests… it’s a lot to take in! Lucien, Gavin, Kiro, and Victor all make an appearance, but very little is explained about any of them and poor Gavin doesn’t even get a name drop—he spends most of the episode floating above the city.

But, with that said, I will admit that Mr. Love is definitely intriguing. I don’t really care one wit about whether or not the Heroine can save her production company, but the sci-fi mystery… now that I can get behind! I am a sucker for a mystery and hot superpowered guys will ALWAYS rank pretty high on my list, so I’ll probably keep tuning in to Mr. Love: Queen’s Choice.  Besides, MAPPA has been hitting it out of the park with their anime releases and it’s clear that someone put in a lot of work to bring this project to life, because the animation is GORGEOUS!! As for which LI is gonna be the canon beau… my money’s on Victor, but they could always go the open end/harem end, so we’ll just see where we wind up in the future. As for now, I’m pretty optimistic about the anime adaptation of Mr. Love: Queen’s Choice.

So what about you guys? Will you be tuning in to Mr. Love: Queen’s Choice this season? Show of hands, how many of you have played the game?