In Blood is the newest visual novel from indie game developer Jaime Scribbles Games, the creative team behind Pinewood Island and As We Know It. Follow Eleadora, a young woman who finds herself drawn into a world of supernatural horrors, when she unwittingly makes a bargain with an ancient god. In Blood brings together elements of Gothic romance and Lovecraftian horror to create a darker and edgier narrative experience reminiscent of games like Demonheart and Cinders, which are notable for their mature storytelling and characters. 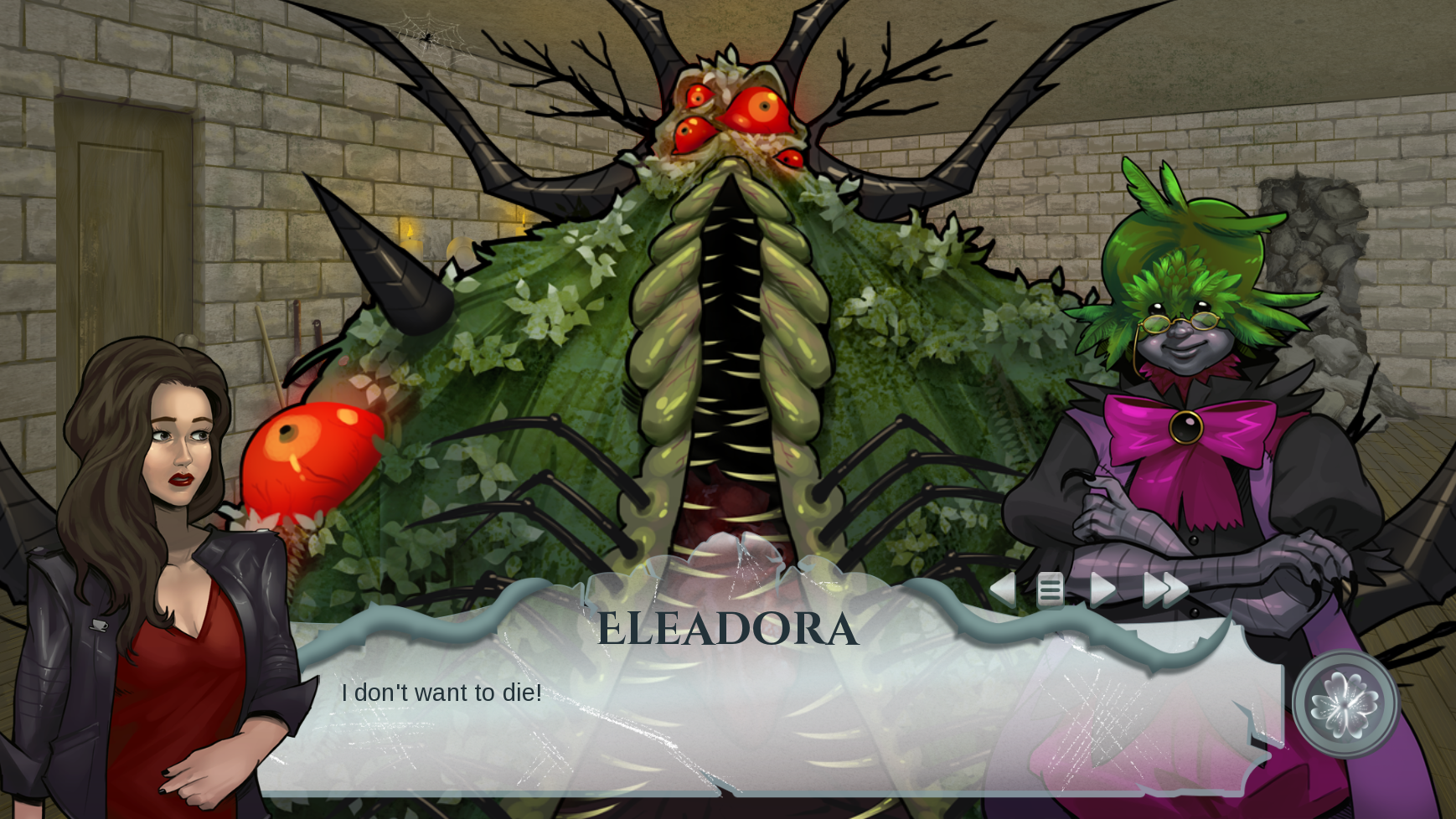 So, I had high expectations going into this demo and now that the Kickstarter campaign is live, I figured this was a good time to share my thoughts about the game and the premise. At first glance, In Blood put me in the mind of a CW supernatural drama series, a la Vampire Diaries—a dark and edgy supernatural romance with attractive 20 somethings…and surprise surprise, I am a sucker for these types of stories!

Right off the bat, we are introduced to our heroine, Eleadora, who is on her way home after a night of drinking. She takes a shortcut through the woods and in her inebriated state she trips and cuts her hand on a broken glass. Pissed and drunk off her ass, Eleadora utters a desperate wish that summons an ancient and forgotten god straight out of a Lovecraftian horror story. The deity offers to grant her wish, all it asks for is her blood—which in her drunken state she agrees to and so she is promptly dragged into what looks like the pits of Hell.

From that moment onward, her life is forever changed—she awakes in Myyr, a plane inhabited by inhuman beings and horrors unlike anything she has ever seen. If she is to survive, Ellie will need to place her trust in one of four strangers—Tristan, Brenton, Karon, and Seta. But, all is not as it seems and each of her would be allies is harboring secrets of their own and trusting them could be more dangerous than anything else in Myyr.

In Blood is set in Myyr, a swamp-like pocket dimension filled with horrors from folklore and home to the Eldritch Abomination that is Nyarbalte—the ancient god of the swamps. I love games that borrow heavily from lore, and I won’t lie, In Blood reminded me a lot of Steamberry Studio’s supernatural romance, Changeling, both in it’s design and the heavy focus on folklore and myth. However, where Changeling splits it’s focus between the human world and that of the supernatural—In Blood does not, we spend a hot second in the human world before being dragged into Myyr and it’s no enchanted forest… You can die in In Blood and the demo does feature one of the Game Over death endings… which if you aren’t a fan of spiders should be avoided… I wasn’t prepared and had to step away from the demo for a day.

As far as heroines go, I really like Ellie, she isn’t overly naive like you see in some otome games, nor is she overly aggressive—she strikes a nice balance. She can be assertive and confident, while also being vulnerable, the events of the game aren’t just happening to her, rather she is an active participant. She doesn’t take things lying down and I really enjoyed her snarky quips and frank observations and there were a few times when her dialogue matched my own thoughts during certain situations.

Ellie isn’t physically customizable like the team’s previous heroines, but there is a neat personality mechanic that helps shape who she is as a character—there are 4 personality traits (Wild vs Tame & Selfish vs Selfless) which are determined by a series of in game choices sprinkled throughout the story. Going to far to any one extreme can trigger a physical mutation in Ellie—each of which is inspired by various creatures from folklore (house elf, Huldra, Siren, and a malevolent creature of shadow). And I like the idea of Ellie being physically changed by her actions, because it gives more weight to your choices—it’s no longer just a matter of determining whether you get a good ending or a bad ending, but whether or not Ellie comes out of the events of the story still recognizably human.

Myyr is filled with various supernatural beings, many of which are out for blood, though the most intriguing are those that claim to be Ellie’s allies. There’s Nyarbalte’s loyal attendant Eris who serves as a caretaker of Ellie and the other inhabitants of the mansion. They have the air of a much bereaved parent, while not outwardly malicious, Eris takes a tough love approach to their care and they need that when dealing with the love interests.

Where to begin—Brenton, Kanon, Seta, and Tristan—each have their own distinctive monstrous personality traits. Despite being being different supernatural beings, each of the characters we meet has a humanoid appearance with a few tweaks made to make them appear more otherworldly (ie. Brenton’s flaming hair and horns, etc). Of course I have my favorites—Brenton is a sweetie pie, with a bit of a hording problem and Tristan is obviously hiding something, but he is one of the only people to offer to assist Ellie without any strings attached. It’s hard to know what Kanon is thinking and he seriously creeps me out… and spider queen, Seta was never going to be my favorite.

But, I like that they all represent different types of supernatural beings—Brenton is a dragon, Kanon is said to be a unicorn (but he reminds me of an incubus), they don’t say what Seta is, but her affinity for spiders makes me think she’s an Arachne, and Tristan claims to be human… but EVERYONE refers to him as a ‘sad puppy’. I like the love interests well enough, their designs are fun and I like they each have their own distinctive personalities which is only enhanced by the vocal performances. I’ve noticed that a lot of indie games are opting to add voice acting to their releases; this can either work for or against a concept, with poor performances detracting from an otherwise solid story. Thankfully, the performances in the game are great, working with the unique character designs and visuals to bring this more mature fantasy adventure to life.

The demo for In Blood lays a firm foundation for what promises to be a dark and atmospheric story. The more realistic art design and the mature storytelling lend themselves to a darker and edgier story. I am definitely interested in exploring more of this world and getting to know these characters more in the full version of the game.

Where to Play the Demo: Itch.io

One thought on “In Blood – Demo Review”