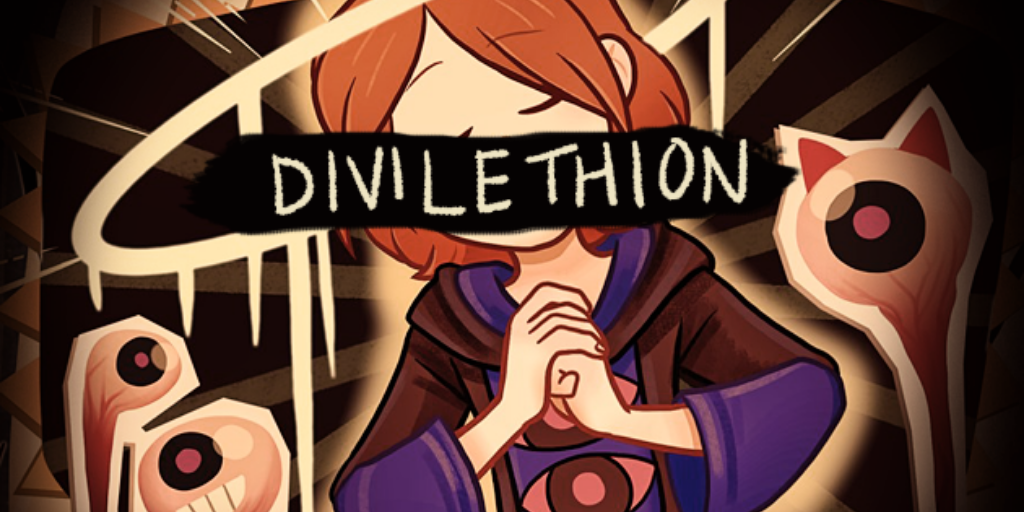 I originally planned to keep my NaNoRenO 2020 reviews contained to the month of May, but what the hell, I’m having a lot of fun with this—so I’ll keep cranking these bad boys out till I’m satisfied! Next up is the dark comedy fantasy visual novel, Divilethion developed by Nemlei. This is their second NaNoRenO submission, the first being, Jack-in-a-Castle, and like their first title, Divilethion has the same smart writing and a macabre comedic tone that will have you in stitches! 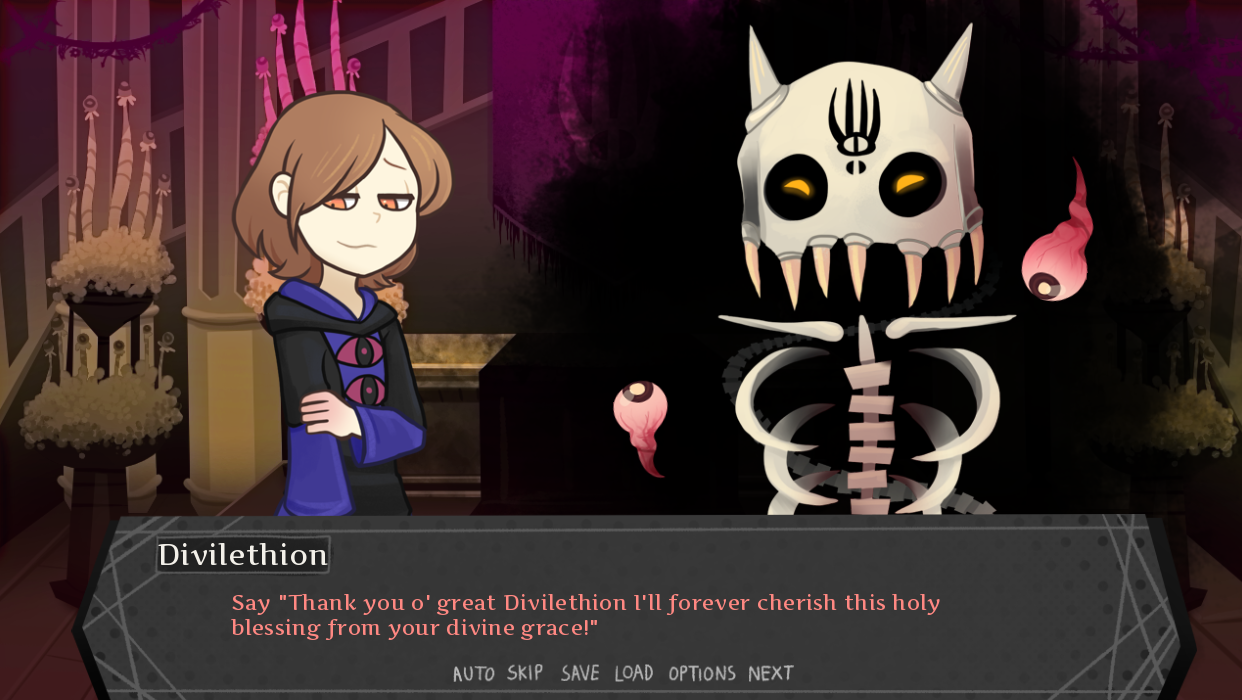 You play as Lynn, one of the high priests serving the benevolent and illustrious god, Divilethion, the protector of your village. But, Divilethion’s protection comes at a price, a trifle really—the occasional human sacrifice—no big deal. Lynn has more important things to worry about, like his strained relationship with his younger brother Marrow. But, when you’re the high priest to a high maintenance (and jealous) god like Divilethion, sometimes sacrifices have to be made…

This game is hilarious!! Divilethion is supposed to take about an hour to get through, but it took me about twice as long, because I spent a good bit of my playthrough laughing. The game takes place in a nameless town under the protection of a monstrous god, Divilethion. The protagonist, Lynn is one of Divilethion’s high priests and his favorite—he is always willing to do whatever the god asks of him and he even delights in his work, much to the disgust of his younger brother Marrow. Unlike his brother, Marrow is a “heathen” who openly scoffs at Lynn and the other villagers for putting their faith in a (clearly) evil god. Divilethion’s only concern is that its precious pet, Lynn devotes all his love and affection towards it (not an unreasonable request).

Honestly, I haven’t had this much fun with a visual novel in a long time—in any other story, Lynn would be horrific—his unabashed reverence for Divilethion and his callous disregard for everything is the stuff of nightmares… and yet, that’s what makes him such a delightful character. He just doesn’t see anything wrong with his actions and even derives a bit of pleasure from savagely butchering villagers in the name of his god. Nemlei does delve a bit into his past, which gives a great deal of context to his actions throughout the game, but even in the “good” ending, Lynn doesn’t have a sudden change of heart where he begs forgiveness for what he has done. In fact, it is Marrow that serves as the “moral” compass of the story—he is the only person in the village who openly denounces Divilethion, which puts at him at odds with Lynn more than once. But, in spite of that, Lynn clearly loves his brother and that he is the only person he truly cares about (aside from Divilethion).

Then there is Divilethion, what can I say other than it is perfectly evil—a monstrous and powerful being that survives off human sacrifice and blood rituals—but he like most people has a soft spot for his pet, Lynn. Their relationship is almost cute, with Divilethion treating Lynn like a spoiled child and Lynn treating the god like a high maintenance girlfriend…

But, what really made the game for me was the narrator, normally they’re just a neutral observer—not here! The narrator of Divilethion is about as biased as you can get, constantly injecting personal quips about the characters and the events of the story and it is HILARIOUS! They have no trouble pointing out the inevitability of certain situations and their blunt observations are absolutely spot on! While we never find out who the narrator really is (I kind of think it’s their dead mom), their frank delivery is hands down my favorite part of the game!

The art is gorgeous, it has a cutesy style that is often at odds with some of the darker story elements, but it works well with the comedic tone of the story. I especially enjoyed that there are times when the dialogue is incorporated into the art itself and the fun animated sequences that make this feel like one of those paper puppet theater shows.

All in all, I really enjoyed Divilethion—it’s a bizarre and hilarious ride that will have you cracking up from start to finish.

You can also contact the Nemlei on Social Media through the following channels: