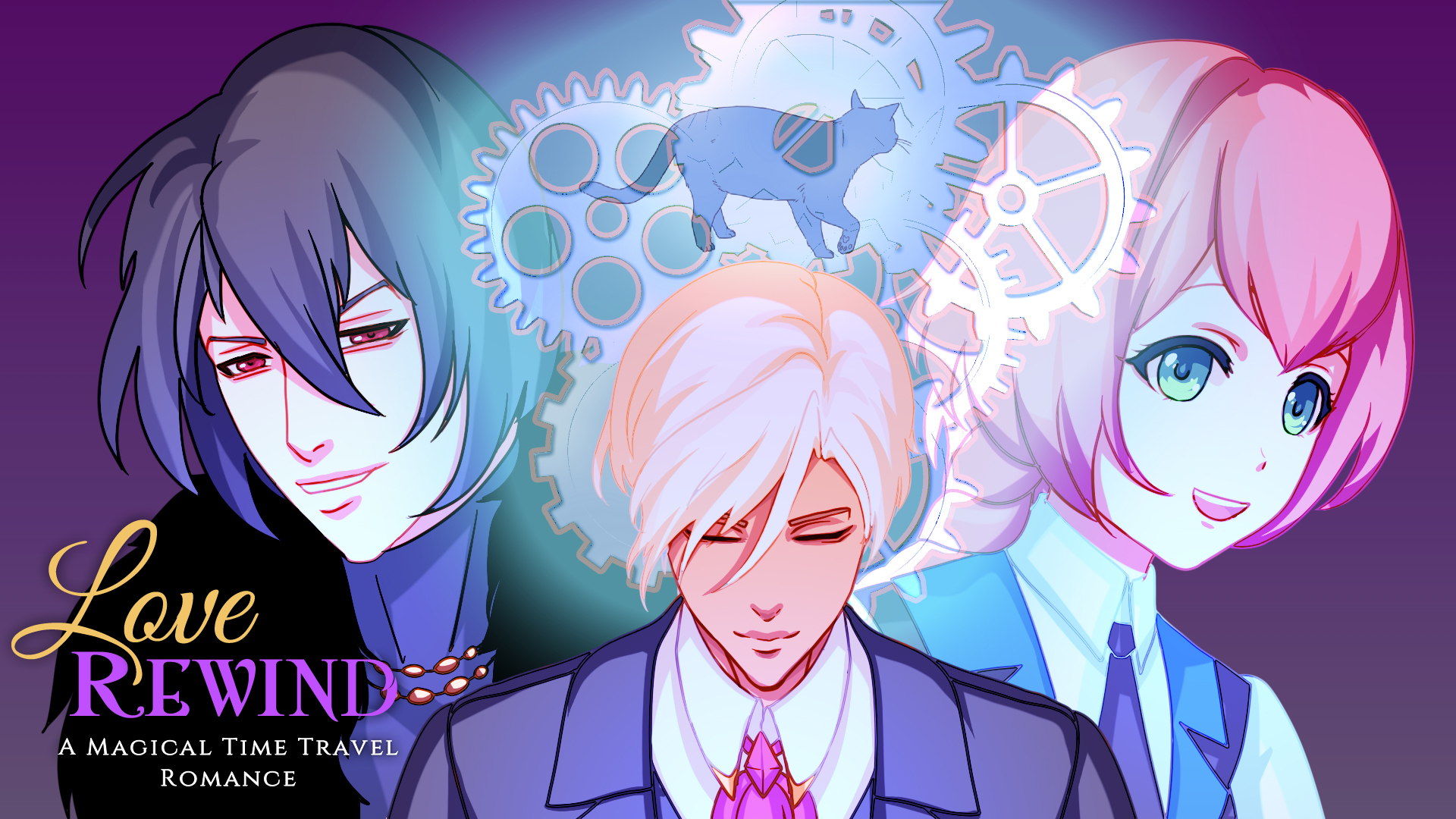 Full steam ahead with another NaNoRenO 2020 game, this time around I’m looking at Love Rewind: A Magical Time Travel Romance, a fantasy romance visual novel developed as a collaboration between three game developers—Omelette, Foleso, and Illusia. It’s not uncommon to see devs collaborating on a single game for NaNoRenO and there are a handful of collaborative efforts among this year’s submissions. I covered Foleso’s solo NaNoRenO 2020 submission, Demon Kiss, though the other two devs are relatively unknown to me, but after playing Love Rewind I’m definitely going to have to check out some of their other works soon. 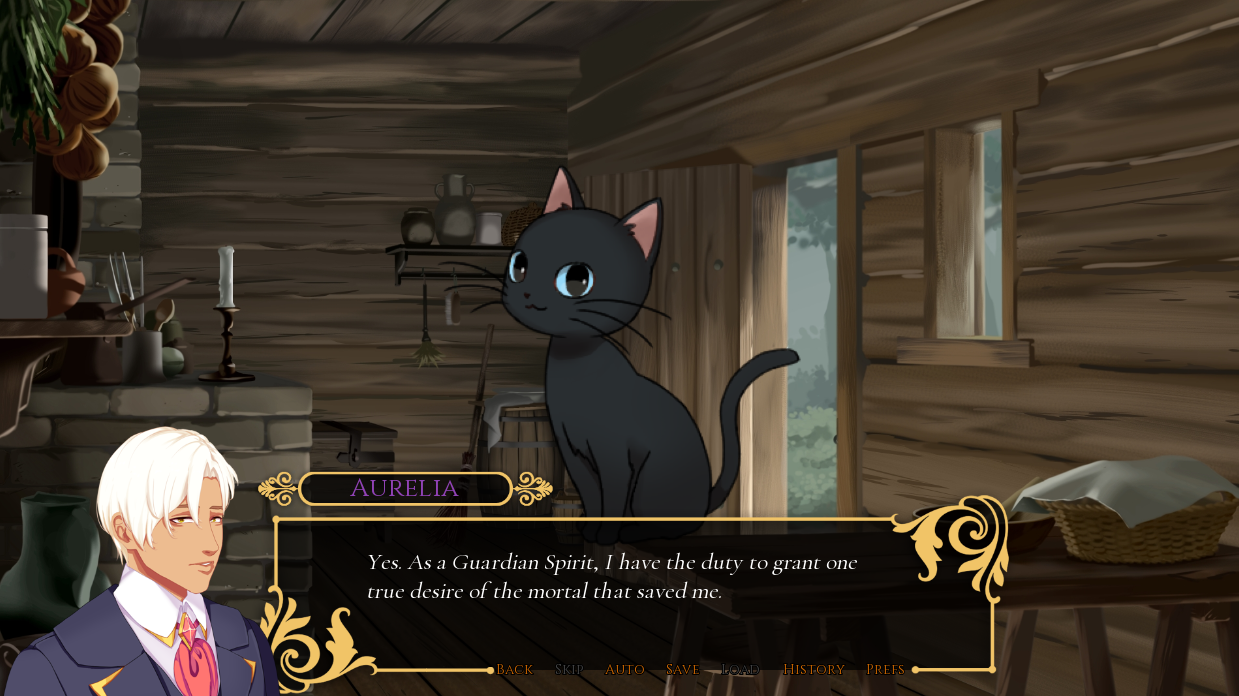 After an accident 10 years ago, Yuki fled civilization to live out the rest of his days as a hermit in the woods. One day, his solitude is broken when he finds a dying cat outside his cabin. Unwilling to let the poor creature die, he takes the cat home in hopes of nursing it back to health. To his surprise, the cat is actually a guardian spirit named Aurelia, and she is duty bound to grant Yuki his deepest desire as gratitude for saving her life. With her powers Aurelia gives Yuki a chance to correct the mistakes of his past…

Short, sweet, and to the point—Love Rewind knows exactly what type of story it wants to tell and it does just that. Far too often you see NaNoRenO games that overestimate their development time and the story suffers, but with Love Rewind Omelette, Foleso, and Illusia manage to tell a pretty well contained story. The entire game takes between 1-2 hours to complete and features two love interests—one male and one female—Zethe and Quinn. Each route has two distinct endings (1 good, 1 bad) and while there were a few similarities across routes, Quinn and Zethe’s routes are distinct enough from each other to make them feel like wholly different experience.

Love Rewind is a solid game, but if I’m being honest it didn’t wow me. It definitely brought up some interesting ideas and themes, like Yuki’s desire to use magic to save his terminally ill mother—a premise that was very similar to the Elric brothers’s quest in Full Metal Alchemist. I also quite liked the time travel aspect of the story—Yuki made a mistake in his past and is given a chance to correct it when he is granted the ability to travel back in time. He retains all of his memories of the original timeline in hopes that he’ll do things differently in the new timeline. It’s a plotline that has been done several times before by other media, but where those stories had multiple episodes to flesh out the story, Love Rewind has the monumental task of telling its story in a much shorter time. The developers get around these time constraints by fleshing out the story just enough to give players a good sense of the characters and the world, without delving into anything too complex that it can’t be wrapped up by the end of the game.

The characters follow much the same thread—there is a bit of duality to their personalities because of the wibbly wobbly timey wimey hijinks, unfortunately the devs play it a bit too safe. In the past Quinn was Yuki’s girlfriend, she’s cute and sweet but ultimately nothing special there; in the newly established timeline Yuki is distant towards her which forces her to be more assertive. This is a great concept, that I would have liked to see fleshed out more, but given the time constraints it can’t be helped. With Zethe, his interactions with Yuki were a bit more strained in the previous timeline to the point that it didn’t allow for much of a relationship to develop. This is completely erased in the new timeline, and with just this small change it allows for the pair’s relationship to grow considerably.

The romance is nice, but like the rest of the game isn’t anything revolutionary, if anything I felt it was a bit rushed (but, I assume that was a product of the shorter development time). The romance with Quinn is much more wholesome and sweet, while Zethe’s is a bit on the spicy side—but the writers keep it PG. If I’m being honest, I much preferred the bad endings over the good endings, because their outcomes while expected felt more genuine given everything we know about these characters and the story…especially Yuki. And yes, characters do die in this game.

So, the final verdict—as it stands, Love Rewind is a good effort, not a perfect game, but definitely entertaining. The characters and story are developed enough to give you a sense of the world and the writers definitely explored some interesting themes. The art is nice, though I am curious as to why Zethe looks like a Visual Kei frontman, while Yuki and Quinn are wearing what appear to be school uniforms… I need answers…

You can also contact the team on Social Media through the following channels: