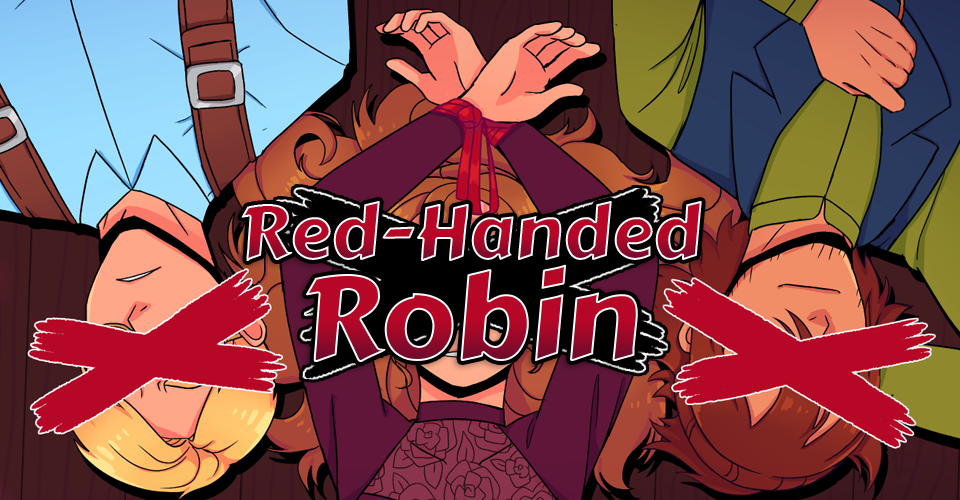 I’m switching gears a bit from the last NaNoRenO 2020 title and I have to admit I was really looking forward to this release. Mystery, romance, adventure—HitOrMissy’s Red-Handed Robin has everything I love in my visual novels! This is the team’s second game release following Fetch Quest, their submission for NaNoRenO 2019 (which is still on my must play list).

This time around the team brings us a good ol’ fashion crime fiction adventure following Robin, a career thief and her loyal bodyguard, Jay as they attempt to flee the country on the brand new luxury train, the Whirlwind Express. With the spoils of her last heist close at hand, Robin is ready to make a clean break… that is until she runs into her childhood friend turned detective… What’s a gal to do? Can Robin lie her way to freedom or will her cover be blown by the handsome detective? Red-Handed Robin is a two part release, and as of right now only part one is available, so the game does end in a bit of a cliffhanger. But, there is still plenty to explore in this fun first installment. 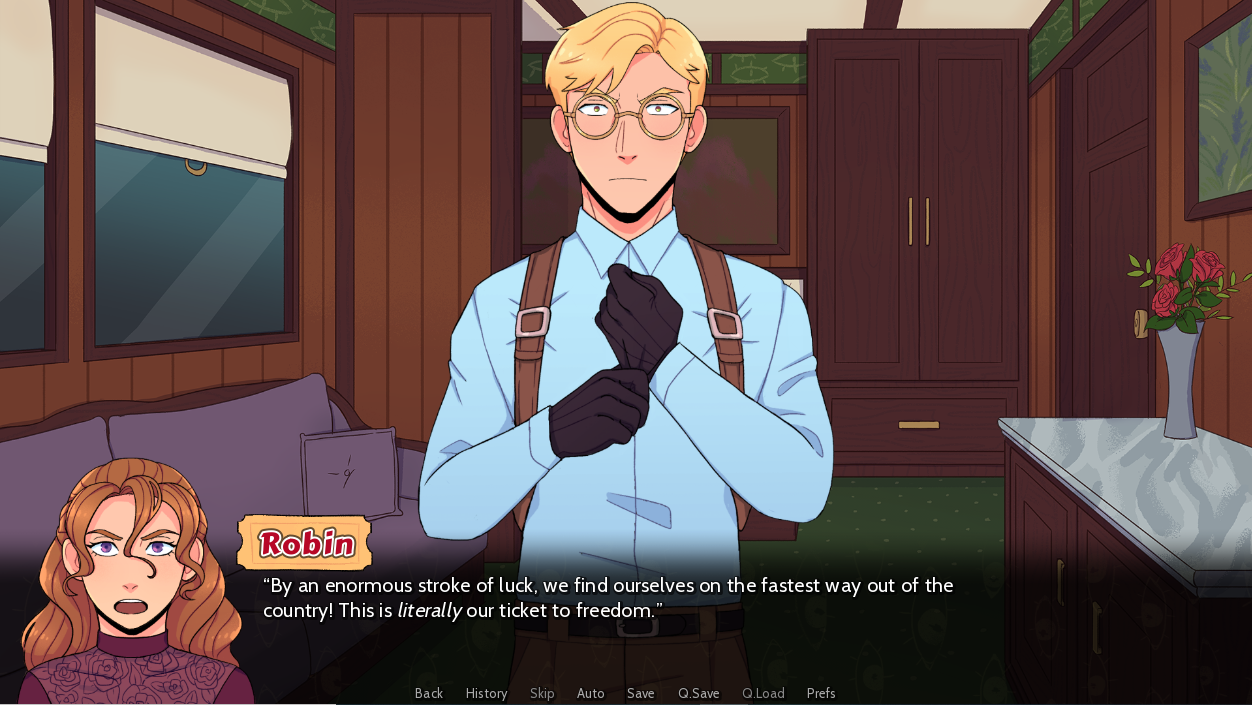 I am a sucker for antiheroes and crime fiction, so Red-Handed Robin was right up my alley, however, instead of stepping into the shoes of the “good-guy” we follow career criminal Robin—a female thief fresh from her most recent heist. She’s a bit of a femme fatale, relying on her wit and charm to get herself out of any sticky situation, but she isn’t inherently malicious. Her easy lies and love of mind “games” have gotten her into a few scrapes over the years, much to the frustration those around her. Robin is cunning and ambitious, and while the circumstances surrounding her latest scheme are a bit hazy, there are some hints that she might not be the “bad guy”. Though that doesn’t stop her from just toeing the line, much to the frustration (and amusement) of the men in her life.

Red-Handed Robin has two leading men for Robin to choose from—her stoic bespectacled bodyguard, Jay and the friendly detective, Wren. Both guys perfectly compliment the game’s leading lady, though she always manages to keep them on their toes with her antics. I love the dynamic between Robin and the LIs, Red-Handed Robin trades in the usual rose colored romance for witty banter and it is absolute perfection! Despite the short runtime of the game, the writer does a phenomenal job of laying the foundation for the characters and their relationship, the chemistry between Robin and each of the LIs is really well done and gives much more weight to their interactions with one another.

Jay and Robin’s relationship feels like that of an old married couple—with Jay constantly being exasperated by the actions of Robin, though there is a fun but of teasing that goes on between the two that suggest they are very well acquainted with one another. Jay especially makes it clear that he will do anything to keep Robin safe, even if that means dirtying his hands a bit, suggesting his feelings for her might not be wholly platonic. Then there’s Wren and Robin’s fun cat and mouse game that calls back to the mental battle of wits you see a lot of in detective media. It is clear that Wren knows Robin is guilty, but instead of just arresting her on the spot, he gives her a chance to outsmart him and earn her freedom. That coupled with their past relationship, makes for some pretty suspenseful interactions! 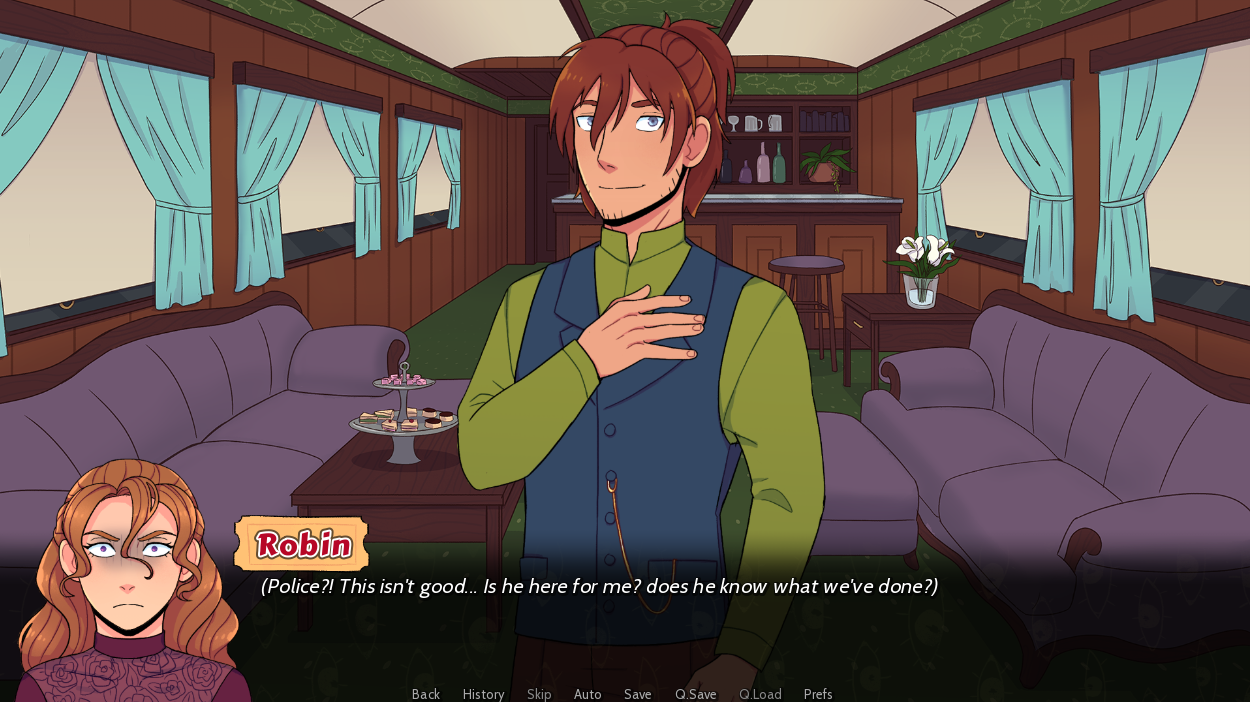 Since this is only the first part of a two part story, Red-Handed Robin does end rather abruptly, however I highly recommend trying to get the two Bad endings. Where the the Good endings leave things rather open ended, the Bad ones add a bit more scope to the story and some interesting background on Jay and Wren. They offer short POV asides from both LIs that help give some great insight into their motivations and actions throughout the game. I especially love Wren’s since it delves more into the circumstances surrounding his past with Robin. But, Jay’s is just so heartbreakingly bittersweet, it’ll definitely hit you in the feels!

All in all, I really enjoyed Red-Handed Robin, it’s a fun story with an interesting premise and characters you can’t help but want to learn more about. It is a bit on the short side, feeling more like a demo than a completed game, however it does a great job of setting a foundation for what promises to be an intriguing adventure. So, I am eagerly awaiting part two and the conclusion of the story.

You can also contact HitOrMissy on Social Media through the following channels: