Dungeon Drafters is a world where magic is cards and cards are magic. Play as a young adventurer, eager to explore ancient dungeons and find long-forgotten cards to build the legendary spell deck that could defeat the one wielding the forbidden cards the entire world fears!

Dungeon Drafters is a playable demo for an upcoming tile-based dungeon crawler. Upon release the game will be available for both PC and the Nintendo Switch and will feature elements of roguelite and card based combat mechanics. Build your arsenal of cards to take down enemies as you navigate a unique fantasy world.

It is the middle ground between sweet and salt, between sauce and spice, and it lies between the pit of a clown’s fears and the summit of his clown makeup. This is the dimension of clownery.

Welcome… to the Cal Zone.

Play as a girl named Anne Chovy and date a sad clown living in poverty!

Pizzaro: Project Deep Dish is a short comedic dating sim, where your love interest is a clown. Play through five chapters full of puns and romance abound in this cute romance game. Interact with a unique cast of characters and make choices that will determine the outcome of the game. 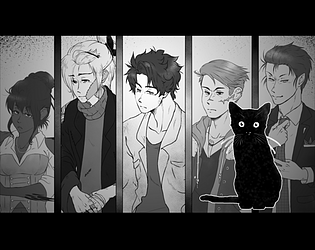 Alastair Cochraine has just lost his job. Threatened with eviction but determined to keep his apartment—and his cats—Alastair sets off on an adventure to pad his bank account. But good jobs are hard to find in this town, and he’s about to discover just how far he’ll go to pay the rent. Potential employers include an anxious alchemist, a morose mobster, and a calculating crime boss. Can Alastair succeed, or will the city swallow him up?

Death by Debt is a short urban survival dating sim that was developed for NaNoRenO 2020. Interact with a quirky cast and romance three potential love interests. Your choices determine which of eight unique endings.