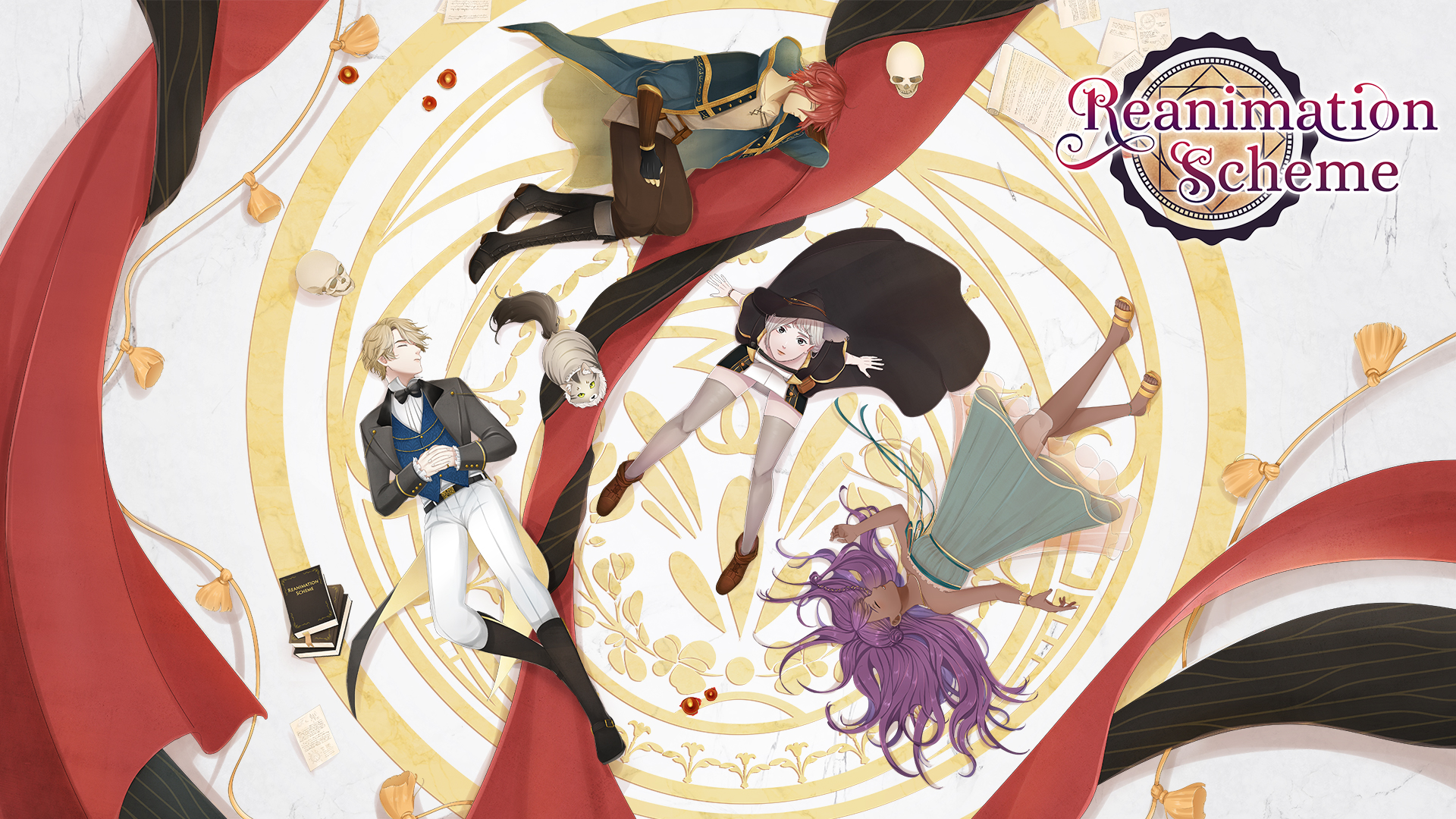 I’m super late with this review, but I wanted to make sure I gave Wind Chimes Games’s demo for their debut visual novel, Reanimation Scheme, my full and undivided attention. I wanted to have this out before the end of the Kickstarter campaign, and I just managed to make it with a few hours to spare. 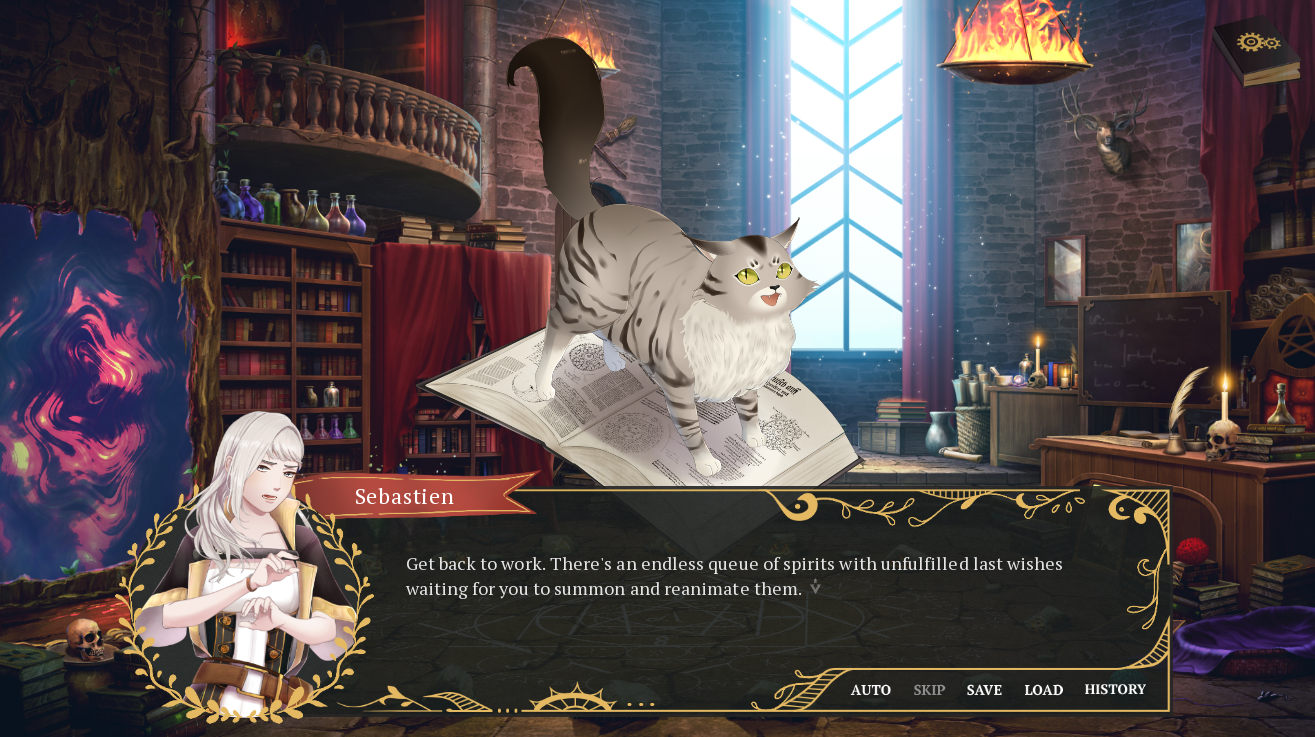 Reanimation Scheme follows Raenelle Talisko, an unambitious necromancer tasked with reanimating souls of the dead in order to help them fulfill their last wishes. In most fantasy literature, necromancy is seen as a branch of dark magic, and those that dabble in death magic are seen in a negative light. However, in Reanimation Scheme, necromancy is a respected profession and one that is in high demand. At the start of the demo, Raenelle is overwhelmed with her never-ending workload, and wants nothing more than to have a break from the constant stream of distraught spirits she encounters. But, when a routine spirit summoning ritual goes awry, Raenelle accidentally summons an unusually powerful spirit. All attempts to send him back to the Spirit Realm fail, and Raenelle learns that all of the spirits have vanished. Things only get worse when every death mage in the kingdom receives an official summons from the Imperial Necromancy Authority to report to headquarters to help find a solution to the crisis. Soon, Raenelle finds herself entangled in the mysterious goings of the Imperial Necromancy Authority and at the center of their investigation into the missing spirits.

The demo is short and covers three chapters, starting with Raenelle’s failed spirit summoning and ending a few days after her arrival at the Imperial Necromancy Authority HQ. It’s a standard visual novel, the player interacts with Reanimation Scheme‘s colorful cast of characters and makes in-game choices that advance the plot. As an added bonus the demo is partially voiced, and even though they only say a handful of phrases, you really get a feel for the characters and their personalities. Raenelle is prone to saying ‘Oh Zianna’ (the in game stand in for ‘Oh God’) whenever something frustrating happens and Sebastian groans when Raenelle is being especially annoying. It’s little touches like that that I enjoy in my games, it really brings the characters to life and I absolutely love the characters in Reanimation Scheme. 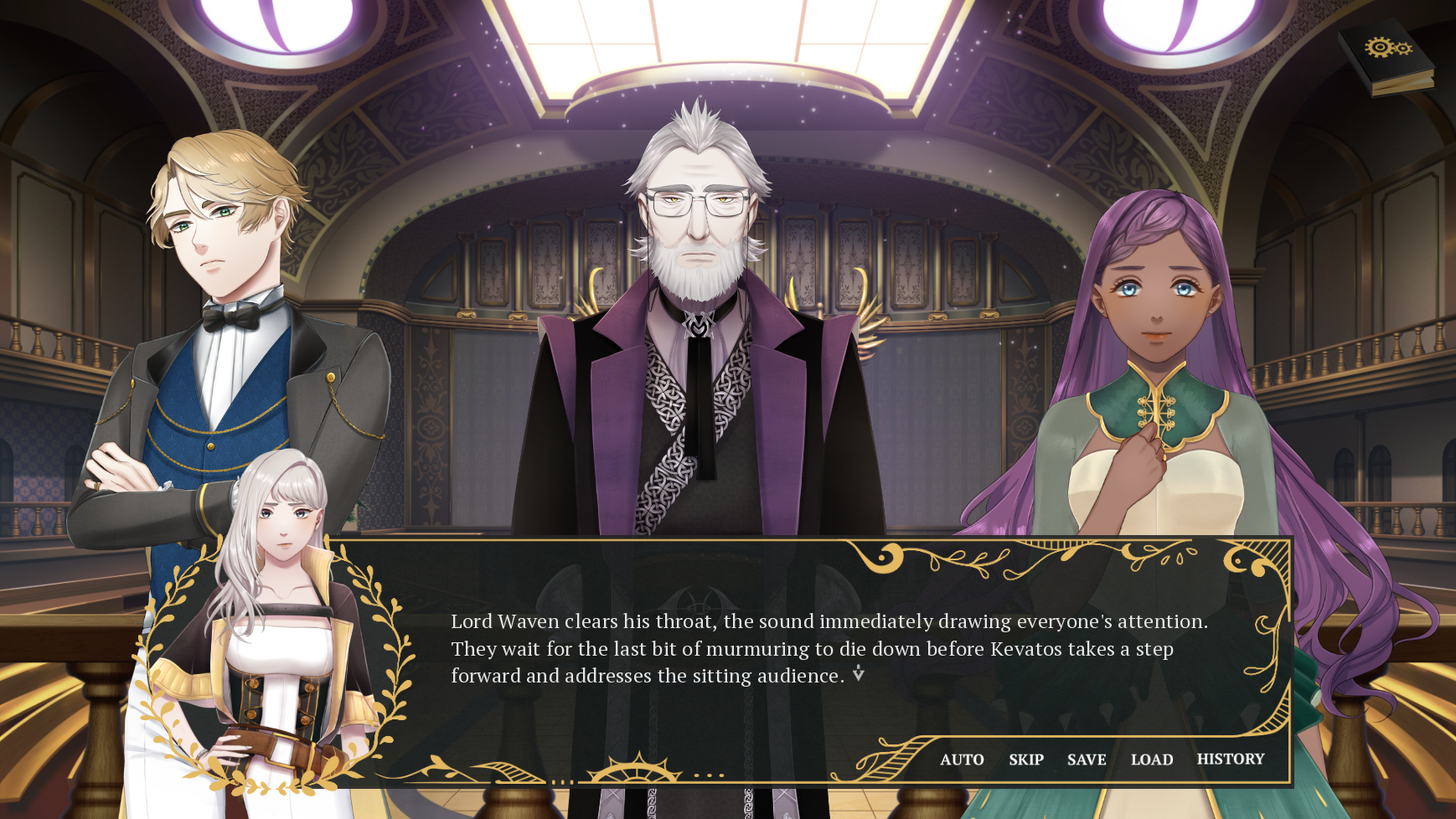 The characters are all well written, even within the short run time of the game you really get a strong sense of who these characters are and where they fit in within the context of the story. I especially related to Raenelle, who isn’t your usual genki girl heroine, she’s a bit on the apathetic side. Most otome heroines are ever cheerful and upbeat, so to have a protagonist like Raenelle who is allowed to be flawed… dare I say human, is refreshing. The love interests are equally impressive, Reanimation Scheme has three romanceable characters: Aldrias, a fellow Reanimator with the heart of a scholar; Kierdan, a high ranking member of the Imperial Magic Authority; and Lyrissa, a cheerful and friendly life mage. Even the side characters are fun, especially Sebastian, Raenelle’s overworked familiar/caretaker. I want a Sebastian route, like yesterday and if the KS campaign reaches its second stretch goal he might get one!!

The character designs do a great job of reflecting the character’s personalities; Aldrias is bookish and unassuming, so his appearance is a bit more casual, while Kierdan’s carefully polished hair and clothing reflect his rank. Even Lyrissa’s flowing pastel colored gowns fit well with her “free-spirited nature”. When the characters use magic, runes and sigils appear on screen and during the spirit summoning ritual early in the game there is a swirling mist that really gives everything an ethereal feel. Even the music lends itself to the fantastical setting of the game. Reanimation Scheme has it’s own vibe.

The writing is so immersive, and the demo only scratches the surface of all the lore and world building the devs have created for the story. I mentioned this at the beginning of the review, but I really enjoyed the practical applications of magic with it’s own bureaucracy, especially the concept of necromancy. There are even mentions of other branches of magic, which I’d love to know more about. Do all mages report to the Imperial Magical Authority? What’s it like in other cities? Dose everyone have magic or just certain people? I have so many questions!!

I was really impressed with this demo, for such a small studio, Reanimation Scheme is a very polished game. Everything about this demo is on point from the snappy writing to the gorgeous visuals and GUI. The artwork is so vibrant and character designs are simply stunning and don’t get me started on the detailed backgrounds! Honestly, I was intrigued by the rich fantasy world Windchimes created, there’s just so much to explore and I can’t wait to see what the final release of the game has in store for us! You can really tell that each and every detail was chosen for a reason and you can really see how much effort was put into this game so far.

If you’re still on the fence about Reanimation Scheme, check out the demo or take a gander at the game’s trailer below and look at all those beautiful characters!

You can also contact Wind Chimes Games on Social Media through the following channels: