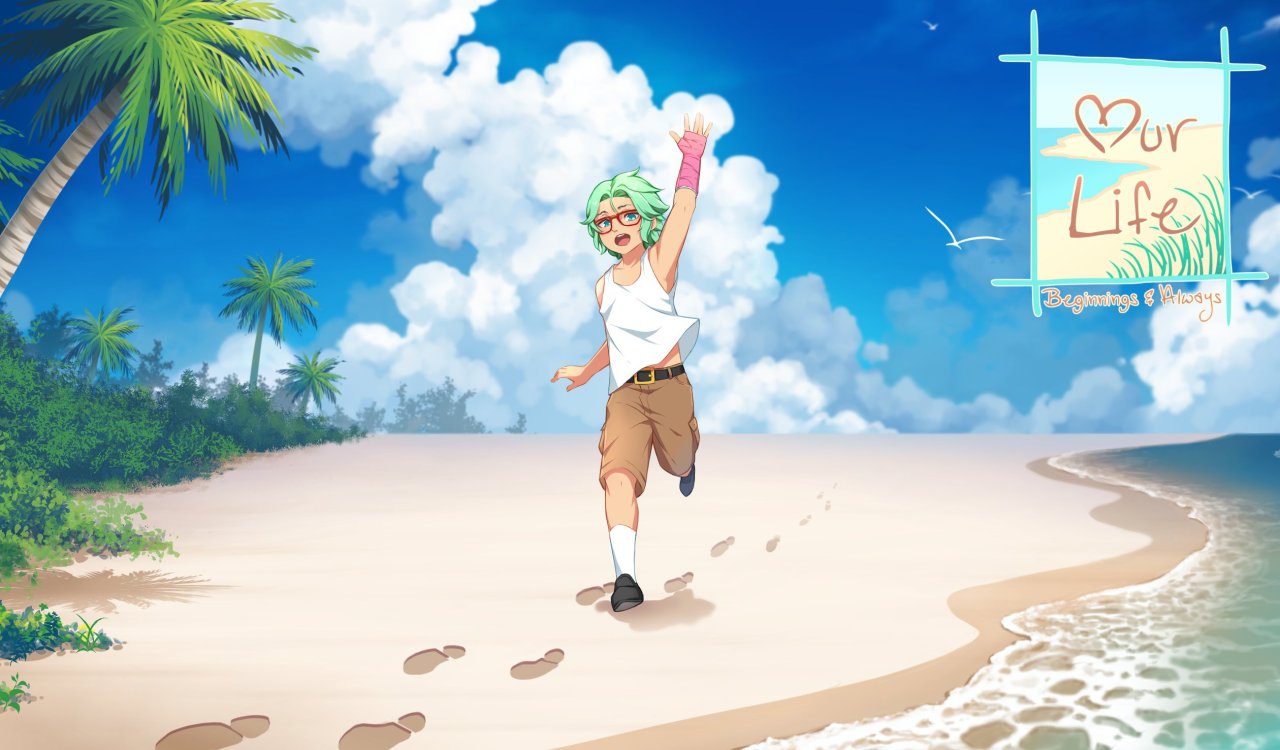 This is yet another late review (I’m slowly working my way through all my game requests), but I’ve been following GB Patch for awhile and I LOVE their games so I was going to get around to playing the demo for their upcoming slice-of-life visual novel, Our Life: Beginnings and Always, eventually. I’ve played a few of their games before and I can honestly say that each of their games is a one of a kind experience, with each new title showing off just how versatile GB Patch is as a studio. They never tell the same story twice, so you can always expect something different from their new releases.

However, Our Life: Beginnings and Always is by far their most ambitious project, spanning several years, following its characters from childhood to adulthood in what promises to be a heartwarming coming of age story. The game is currently on Kickstarter, but the campaign is set to end on November 10th, so definitely check that out! The demo covers the first two stages of the character’s lives (childhood and adolescence), but the full game will cover four different periods of life (childhood, adolescence, teenage, and adulthood). And since Our Life: Beginnings & Always is set in the same world as their earlier game XOXO Droplets expect to see cameos of a few of the boys from that game from time to time. I played through the early demo and I am already in love with this game and its concept!

Our Life: Beginnings and Always gives players the chance to create their own character and guide them through the various stages of their life, from their childhood, through adolescence, their teenage years, and finally adulthood. The story is primarily set during the Summer months of Jamie’s (name changeable) life, starting with their fateful encounter with Cove, a shy young boy who moves to their seaside town when Jamie is eight years old. The boy becomes a constant presence in Jamie’s life and like the endless days of Summer, their relationship is full of infinite possibilities. Our Life is an enchanting premise, giving players full control over their character and the course of their story, including their relationship with Cove and the other residents of Sunset Bird. The game takes place during the summertime of each phase of the character’s lives and we see how they grow and change over the years.

While there is a romance component to the game, Our Life isn’t a “romance” game, rather players are encouraged to build their own life story. The protagonist is fully customizable, you decide their name, appearance, gender, personality, interests, relationships, and what becomes of them in the future. GB Patch attempts to mimic the transience of life, by giving players the chance to alter key aspects of their character at the start of each stage of their life. These changes become the norm for your character as you move through the different stages of their life, and a testament to their progression as a person. Each and every choice in the game is integral to establishing who your character is and how they experience the world around them.

Cove is the game’s sole love interests (there are plans for other love interests in future DLCs) but unlike most romance themed visual novels where the emphasis is always on raising affection points by relentlessly stalking the object of your affection, Our Life takes a much different approach. Each of the choices are geared towards developing the protagonist and Cove as characters and not building their relationship with one another. Instead your choices and actions throughout help shape the kind of man Cove becomes. As he grows his looks, interests, and personality change with him, based on your actions throughout the game, however, you won’t know how they impact him until long after you’ve made them. It feels more natural this way, since you never truly know which direction the story will take outside of the few changes you make at the start of each life stage. He can become a quiet nerd, a sporty jock, and more… the sky is the limit…

However, you can decide how you and Cove feel about each other by adjusting the Comfort and Interest levels at the start of each new stage and he will respond accordingly. You can choose to have your relationship develop slowly over time or have them be head over heels for each other from the start. I really enjoyed playing with the different Comfort and Interest levels in the demo and seeing how they effect your interactions with Cove, really drives home the idea that this is your story. If you aren’t interested in romance, your relationship doesn’t have to progress beyond that and there are no consequences for doing that either. However, I will note that once you set your levels you can’t decrease them lower than that point.

But these changes are not exclusive to just Cove and the protagonist, all of the characters in the game grow and change as the years pass. GB Patch has always been great at developing organic characters, and Our Life has a vibrant cast of colorful character that add depth to the story and the world they’ve created. I am enamored with the characters, from Lizzie, the protagonist’s pushy older sister to Cove’s well meaning and eccentric dad, and there are even a few familiar faces from GB Patch’s XOXO Droplets that make a few cameos. There are other characters that will make an appearance in later stages of the game and I can’t wait to see how they are integrated into the already tight knit cast.

But, I was especially excited to see the different family dynamics and how those work within the story. The protagonist has two mothers, and rather than establishing this as something unusual or atypical, their family is treated with the same care and reverence you’d see with a “traditional” nuclear family setup. Then there’s Mr. Holden (Cove’s father) who is co-parenting Cove with his ex-wife after their divorce is finalized and a lot of the earlier emotional turmoil in the game comes from Cove trying to come to terms with his family situation. But, there really isn’t one singular “conflict” in Our Life, just a series of life experiences. It’s how the characters are shaped by their experiences that serves as the true selling point of the game.

To add to the already immersive title, Our Life is partially voice! Currently, Cove is the only character with voice acted lines, but there are plans to add more vocal talents to the project as development progresses. In the current demo build only the childhood stage has voice acting, and from what I’ve heard I really enjoyed the performance. I do want to note that GB Patch gave early supporters of the game a chance to have their names added to the list of voiced name opinions. Usually I don’t name the protagonists after myself in games, but the devs added my name to the list of options, so I figured I’d give it a try nonetheless and… personally it’s weird hearing a character in a game use my government name… but, I also get the appeal. It really makes you feel like you’re a part of the story and the feature works well with the overall theme of the game. In the future there’s a plan to add over 400 names to the list, which is already leagues ahead of any other game I’ve played.

There is something wonderfully nostalgic about Our Life that you don’t see very often. With its quiet seaside setting, vibrant cast, and immersive story, Our Life: Beginnings and Always gives players the chance to truly build their own story, while also capturing the unpredictability of life in a very natural way. This a game brimming with potential, and I can’t wait to see where this story takes us in the future.

If you’re still on the fence about Our Life: Beginnings and Always, check out the demo or take a gander at the game’s trailer below and look at all those beautiful characters!

You can also contact GB Patch on Social Media through the following channels:

2 thoughts on “Our Life: Beginnings & Always Demo Review – How Will Your Life Unfold?”