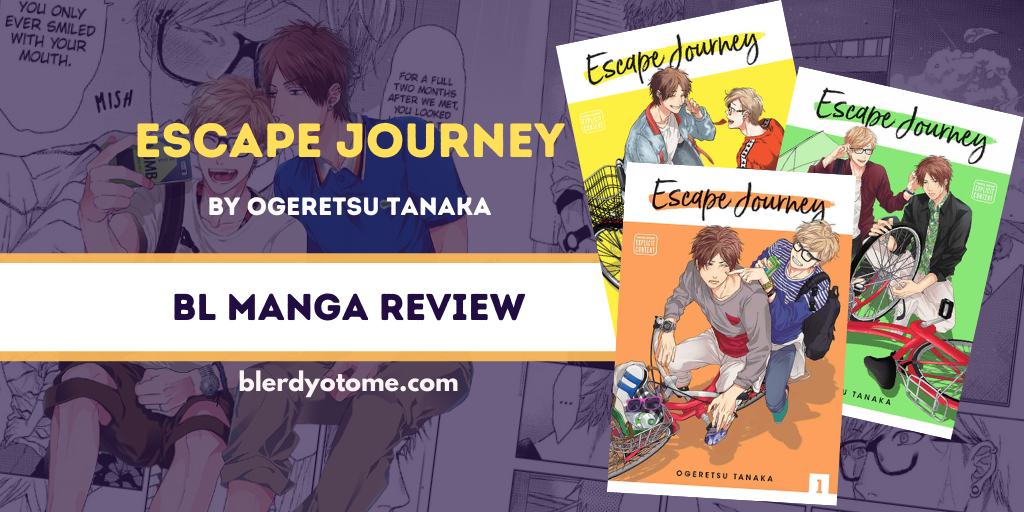 The boys love genre has always toed the line between what is acceptable and what isn’t when it comes to romance, usually straying into some pretty questionable territory in how it depicts same sex couples. Either you get an angst filled drama fest or a lot of non-con smut, and every so often you come across a title that manages to give you something genuinely wholesome. Escape Journey is Ogeretsu Tanaka’s English-language BL debut and like many boys love manga before it, struggles to find that balance between wholesome romance and the appropriate amount of “drama”. However, despite its flaws, Escape Journey is a solid boys love title and at only three volumes it delivers a rather savory reading experience.

Escape Journey follow Naoto and Taichi, two guys who went from friends to lovers in high school, but the relationship proved to be too much and the pair split after a huge argument. Even though years have passed, Naoto is still upset (read: pissed off) about how things ended with Taichi and is looking forward to getting a fresh start in college. But, on his first day he discovers that Taichi has also enrolled at his university and interested in being friends again. While Naoto is initially unsure about his feelings for his ex, the two quickly fall back into their old friendship, which eventually evolves into something more… but, old hurts don’t heal easily and the pair finds themselves falling back into the same routine. Will they be able to move on from the past and build something stronger this time around or will Naoto and Taichi continue to hurt one another?

Honestly, I quite enjoyed Escape Journey, the characters were on point, the author builds this wonderful cast of side characters around the main pair that really expands on the scope of the story, especially the female character Fumi and Mika who play a fairly significant role in the story. The side characters aren’t just props that fade into the background never to be seen again, they are actively involved in the entire story and I really enjoyed that aspect of the manga.

The main couple was likable and the chemistry between them was great (despite some “issues”), one thing Ogeretsu Tanaka does right are her ukes and Naoto is definitely one of my favorites. He’s a surprisingly well rounded character, that isn’t overtly effeminate nor is he wholly dependent on his seme. In fact, Naoto is a pretty outgoing and friendly guy who makes friends (both male and female) easily, and we actually see him interacting with his friends and family quite regularly. He has agency in his relationship with Taichi and we get some great emotional depth from him.

On the other hand, Taichi was a bit hit or miss for me, I like him as a character, he’s the complete opposite of Naoto, he has trouble expressing his feelings which contributes to a lot of their relationship woes and like most semes he’s a teeny bit possessive and prone jealousy. But, as far as semes go, Taichi is pretty tame when compared to someone like… oh, let’s say, Asami from the Finder series. Tachi and Naoto are two very dynamic characters, that have their fair share of flaws, but that’s what ultimately makes them work as characters. However, the relationship between the two main leads isn’t exactly what I’d call “healthy”. It is clear from the beginning that Naoto and Taichi are two very flawed people harboring a lot of emotional baggage. Their initial breakup in high school was ugly on both sides and neither Taichi or Naoto ever fully talk about what happened in the past. In fact, they spend most of the series tip toeing around the subject, so it isn’t surprising when they run into the same problems they did in high school.

Tachi immediately attempts to pick things back up again from scratch, though it is clear that he wants to be more than friends with Naoto, who for the most part tries to keep things platonic, despite never really having gotten over his feelings for Taichi. Despite that, he’s afraid of opening himself up to Taichi only to wind up getting hurt again, but even with his hesitance the pair enters into a casual sexual relationship (and boy are the sex scenes plentiful and… steamy). Usually, I’d be pretty miffed about how quickly the main pair jump into bed, but given their past history, unresolved feelings, and the fact that they’re college freshmen… it kind of makes sense that they’d hit the fast forward button on their relationship, even though they haven’t worked through their issues. Taichi is prone to jealousy and can be a bit overbearing with his affections for Naoto, which culminates in a rape scene midway through the first volume.

The rape scene is one of my biggest complaints about the series, since it’s never fully addressed afterwards and the characters just pretend like it never happened. Rape is not something that’s unusual in BL media, in fact most boys love titles use rape as a means to kick start a relationship between its characters… and while I’m not a fan of this trope, I am aware that it is pretty prevalent in the boys love genre. However, in Escape Journey the rape scene comes completely out of left field, despite the author’s attempts to show how possessive (and lowkey jealous) Taichi can be. But, even with those subtle hints we never see Taichi get violent with Naoto in anyway, in fact he tends to keep his emotions pretty much in check up until that point in the story, and it’s such an OOC moment and it’s kind of jarring. It only consists of three pages, and you could remove them and absolutely nothing would have been changed (I kind of wish the author had left it out all together). The other earlier drunken one night stand is questionable as well due to the dubious consent (Naoto consents, but is drunk off his ass), but it is nowhere near as unsettling.

Of course, that isn’t the only boys love cliche to make it’s way into Escape Journey‘s pages. Volume 2 has a romantic rival that threatens Taichi and Naoto’s relationship, however thankfully it never amounts to a full blown “love triangle”. Instead, Tanaka balances this conflict with a healthy dose of reality, by actually addressing the stigma surrounding same sex relationships in Japan. She touches on this early on with Naoto acknowledging that there is no happy ending for him and Taichi in a heteronormative society. Taichi also realizes that while he loves Naoto and wants to be with him for the rest of their lives, their relationship is not something that everyone will accept and that causes him a lot of emotional turmoil in the latter half of the series. I have to say, that I was really impressed with the way Tanaka tackled this issue, since most BL media completely glosses over the social stigma surrounding same sex relationships.

This is perhaps the series’s saving grace since the bulk of volumes 2 and 3 focus on both Naoto and Taichi coming to terms with their relationship and how it will be viewed by their friends, family, and even strangers. There’s a scene where Taichi goes to a realtor to inquire about getting an apartment with Naoto and the guy tells him point blank that their application will most likely be rejected because of society’s preconceived notions about gay couples (the guy even mentions that if they were both women, things would be different). There’s even a heartbreaking scene in volume 2 where Taichi introduces Naoto as his boyfriend to his estranged mother and she rejects him, blaming herself for her son turning out “that way”. This contrasts with a scene in volume 3 when Naoto’s family seems genuinely accepting of the news that Naoto and Taichi are in a relationship, however his mother is honest with the pair about the difficulties they’ll face because of their relationship. But, it isn’t just the family, we also see how their college friends and classmates handle their relationship, and while most are accepting and optimistic, Tanaka does show a less than positive reaction from some of their classmates. However, by the end of the series, both Naoto and Taichi have a pretty solid support system to help them deal with any opposition they’ll eventually face.

Escape Journey isn’t so much about the destination, but the journey itself, but even still the ending was totally worth the ride. The series is not without it’s shortcomings, and if you are looking for a super fluffy, sunshine and roses kind of romance, Escape Journey is probably not the manga for you. Even in spite of some of the more questionable story elements, its easy to get caught up in the complicated relationship between Naoto and Taichi. It’s not a perfect romance, it’s messy, the characters make mistakes (and they’ll probably keep on making them too), but they grow with each obstacle they face and ultimately that’s what makes this series really shine.