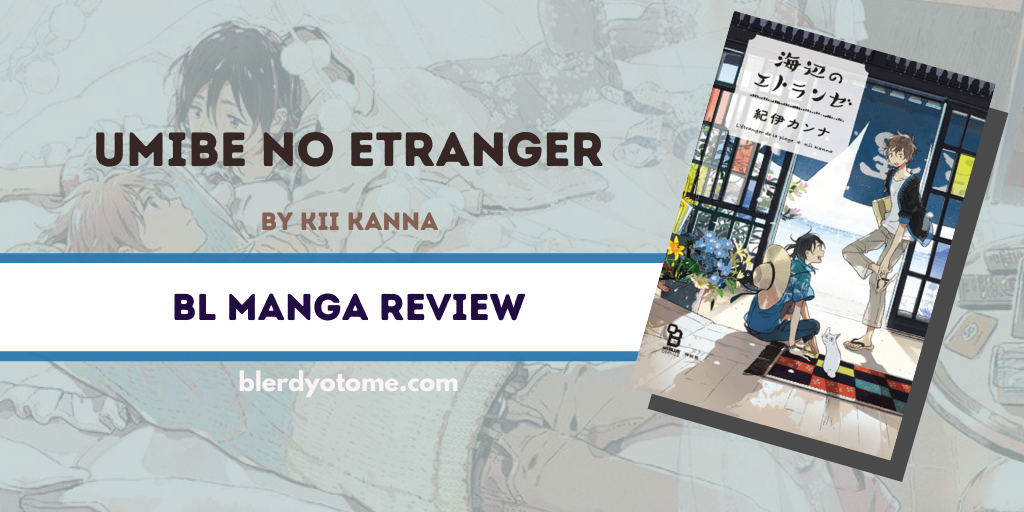 TGIF! It’s that time of the week again, it’s Fangirl Friday!! WOOT! I’ve been on a bit of a BL manga binge this week, so it seemed fitting that this week’s post be about one of the titles I read. If you aren’t in the mood for BL, I highly recommend checking out one of my other Fangirl Moment posts (there are a ton to choose from) by clicking right, HERE, I cover a range of topics so I’m sure you’ll find something worthwhile over there!! For everyone else, let’s get this show on the road shall we?

This week I’ll be covering the Kii Kanna’s 2013 slice of life boys love manga, Umibe no Étranger. The series is four chapters long, all of which have been compiled into a single volume. While there hasn’t been an English language print release for this title, it is available digitally from  Renta!, under the title ‘The Stranger by the Sea’.

*Note: I will be covering the sequel ‘Harukaze no Étranger’ during next week’s Fangirl Moments post, just a heads up!

Three years ago, Hashimoto Shun, a gay novelist in the making, met Chibana Mio, a very quiet high school student, in Okinawa. Mio had lost both of his two parents and was often seen sitting on a bench until very late, watching the sea, near Shun’s house. They slowly grew closer to one another, but Mio suddenly had to leave the island, to pursue his studies…

Three years later, Mio returns to Okinawa: “I’ve been thinking a lot these last three years… Even if he’s a man too, I love Shun.”

Will these two finally be able to take a step forward together?

I think I have found my niche when it comes to BL manga, took me years to figure out, but I can honestly say that slice-of-life BL is the way to go! Don’t get me wrong, I enjoy smut as much as the next person, but, it is so refreshing to read a BL manga that focuses on building the relationship between the main couple FIRST, and then progressing to the physical side of the relationship. So, when I stumbled upon this manga the other day, it was like the BL gods had answered my prayers!

Shun is an aspiring novelist, that just happens to be gay, he sees Mio sitting alone on a bench by the sea and is immediately captivated by the melancholy youth, but, he does not attempt to seduce the poor kid. He watches him from afar, long before he works up the courage to actually talk with Mio (and no, it’s not nearly as creepy as it sounds), and even then, he doesn’t initiate a romantic relationship. Shun instead offers to be his friend and it’s only after Mio leaves the island and comes back three years later that they even start considering pursuing a romantic relationship. When Mio comes back to the island ready to pick up where they left off, Shun rebuffs him, not because he doesn’t want to pursue a relationship with Mio, but because he wants to make absolute sure that this is something Mio wants.

Despite his feelings for Mio, Shun is very passive about pursuing a relationship with Mio, however, that doesn’t mean that he is quiet about his sexual orientation. He is open about being gay, with his family and with Mio and despite being labeled as strange by others, he is unabashed. I have to give it to Kii Kanna, Shun is one of the most realistic gay characters I have ever seen in a BL manga!

On the flip side, Mio, undergoes a complete 180 after returning to the island. Rather than the taciturn teen he was three years prior, Mio is noticeably much more upbeat and more than open about his feelings for Shun. There is a instant where Mio wants to pursue a sexual relationship with Shun, because in his head, sex is a physical expression of his love for Shun. However, Shun immediately shuts him down and rather than ignoring him and jumping his bones, Mio actually respects his decision! I had to read that part five times, because had this been any other BL manga, Mio would have just started having sex with him on the spot, with or without his consent! THIS IS HOW A BL IS SUPPOSED TO BE!! No, does not mean yes, it means NO, and if a character respects their partner enough, they stop when the person says stop!

But, that’s not the end of the realism in this manga, Kii also includes a female same-sex couple that serves as a recurring example of not just how a same sex relationship should be depicted, but how a stable relationship in general should look. Add that to the list of realistic obstacles that both Shun and Mio have to deal with in their relationship and you have one of the most realistic BL manga I have read in a long time!

This manga, despite it’s shortcomings is an example of BL done right! Yes, it’s cliche at times and yes it falls prey to many BL tropes, but Umibe no Étranger excels where it counts! Kii Kanna is now one of my favorite BL mangaka, because this is one of the most LGBTQ positive manga I have read in a long, looooooong time!