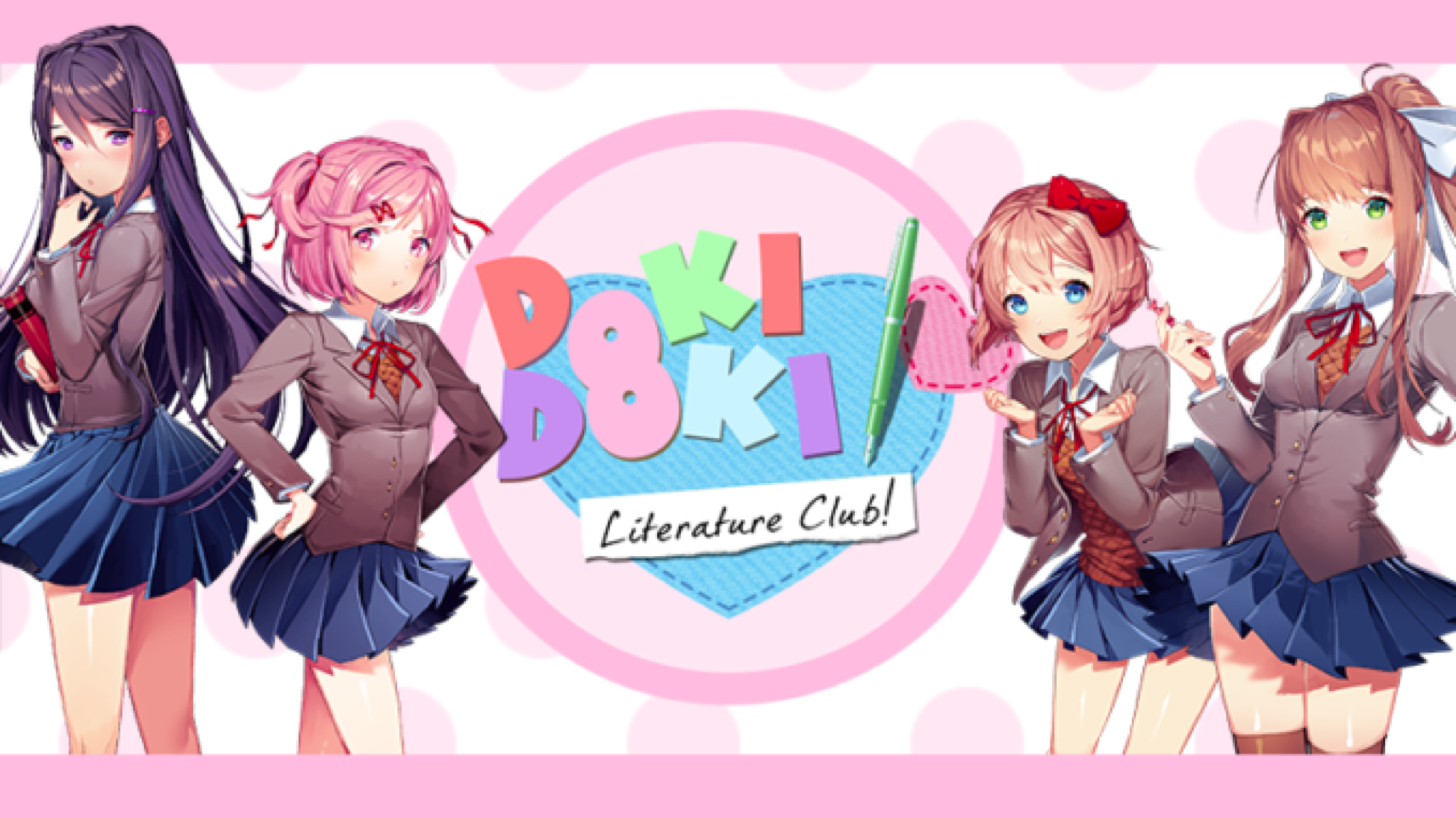 There is no way to talk about Doki Doki Literature Club without spoiling it, so if you haven’t already played this game, go do so before reading this review. Trust me, you want to go into this game blind.

Right, so I’ve seen Team Salvato’s Doki Doki Literature Club floating around, but I wrote it off as one of those cutesy anime styled harem romances and let it fade into the dark recesses of my backlog. I probably would have continued on blissfully unaware about the horrors of this game, had it not been for a friend mentioning it to me in passing:

But, I will admit it was enough to pique my interest, so I downloaded the game and decided to give it a play and finally see what all the fuss was about. I was aware that there was a “twist”, I just didn’t know what that twist was, since Doki Doki Literature Club was so far under my radar I never cared to give it more than a cursory glance. Despite my love of otome games, I never truly got into the harem genre and it’s moe female characters. So, I went into this game with about as much enthusiasm as I do waking up for work the Monday after a four day weekend…

It’s a slow burn, taking you through the day to day adventures of the Literature Club, a place where you can “chit-chat” with cute girls and participate in “fun” activities, like poetry writing and the game sets you up for a cute slice-of-life dating sim experience. You play as a largely unassuming harem protagonist who joins the Literature Club in hopes of getting close with one of it’s good looking members, an assortment of harem trope characters. It took me three weeks to get through the first half because it was so excruciatingly slow; chat with cute girls, complete the poem writing mini game, share poem with the girls… wash rinse repeat. Around this point I was wondering why there were so many warning labels slapped onto this game, Doki Doki Literature Club was pretty inoffensive and to be frank a little dull, there were times when I wanted to drop the game (and I almost did too).

But, that’s really where Doki Doki Literature Club shines, it lulls you into a false sense of security, with its upbeat music, bright colors, and cutesy female love interests only to completely subvert your expectations. The warnings are totally valid and should be taken seriously.Doki Doki Literature Club leads you down a dark and twisted path that culminates in the death of one of the characters. But, if you think that’s the most shocking aspect of Doki Doki Literature Club, you have another thing coming. When shit hits the fan, it really hits the fan, and it never quite stops, hitting you with wave after wave of nightmare inducing psychological horror. The player isn’t allowed to get a firm foothold on anything, instead everything seems to spiral completely out of control. 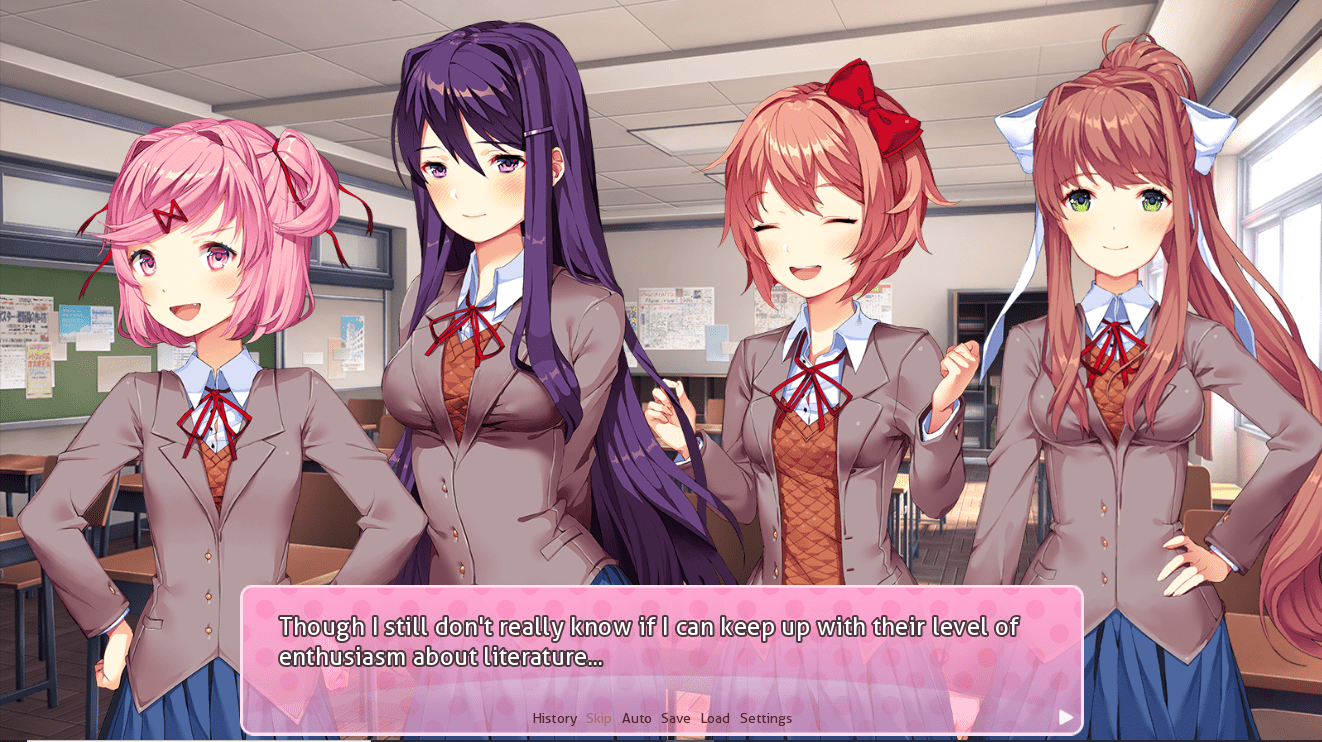 After that first playthough, nothing in Doki Doki Literature Club is ever the same again and in a meta twist, the events of the games seem to have an affect on game itself. When the main menu reloads after the MAJOR CHARACTER DEATH, said character becomes a pixelated blob and all of the save files are corrupted forcing the player into starting a new game. That in and of itself is horrifying, since save scrubbing is essential in visual novels, but the game doesn’t stop there, any mention of the now deceased character is met with serious glitching until finally erasing the character from existence! There is no reloading save files and making the problem go away, what’s more the game seems to be actively rewriting itself. There are moments when the game will fast forward through scenes, alter text and images to create some seriously unsettling nightmare fuel. Everything becomes warped and distorted to the point that Doki Doki Literature Club is unrecognizable. Gone is the cute slice-of-life dating sim and in it’s place is an inventive and honestly effective psychological horror.

Sure there were hints about Doki Doki Literature Club‘s dark turn, but it’s easy to dismiss a few throw away lines of foreboding here and there, however, in a masterful stroke of misdirection, the horror is never quite delivered the way you expect it to be delivered AND it’s never to be taken at face value. Doki Doki Literature Club is an off kilter game that constantly changes the rules, subverting expectations until it’s finally conclusion. The warnings are not a suggestion, but to be taken at face value and even the title is rather fitting… this game will make your heart go doki doki, but not for the reasons you’d expect.