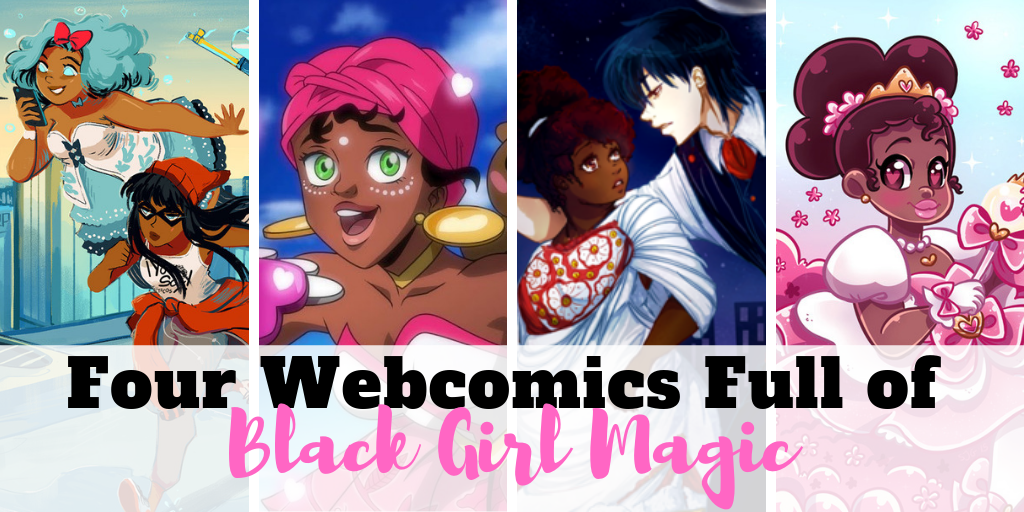 It’s Melanin Monday and I can’t think of a better way to kick off the week then with a little Black Girl MAGIC! I am a huge fan of indie webcomics and I’m always on the lookout for new ones to dive into, whether they be LGBT friendly romances, sci-fi epics, or slice-of-life, I read them all. But what I love most about webcomics, is how diverse they are, not just in the types of stories they tell, but in the types of characters they feature. I’ve always noticed that indie works tend to feature more characters of color in prominent roles, and while mainstream media isn’t far behind in the diversity department there is just something organic about indie works. Mostly because the authors themselves are people of color, so there is an added level of relatability that only comes from someone telling their own story. While I admit to reading a lot of BL themed webcomics (like A LOT), I also gravitate towards comics that feature strong female characters and of course women of color.

We’re living in a post #BlackGirlMagic world and it is important to celebrate media that doesn’t just include women of color for the sake of “diversity”, but instead creates narratives that allow them to thrive! So I came up with a list of webcomics I found that are full of positive Black Girl energy!

Hover Girls by Geneva B (GDBee)

Jalissa and Kim Vasquez are two cousins just trying to make it in the city of Los Aguaceros. Well, Kim’s also trying to get famous. They just happen to be monster-fighting magical girls on the side.

During the day, they both eke out a living as baristas at Big Chain Coffee, the world’s favorite coffee conglomerate. On especially torrential days,  fish-like monsters wreak havoc on the city, and it’s up to the HoverGirls to stop them! But where are these monsters coming from in the first place?

Kicking off this list is a personal favorite of mine that combines the crime fighting of superhero comics with the girl power of the magical girl genre and it is ABSOLUTELY PERFECT! Hover Girls follows cousins Jalissa and Kim as they navigate the ups and downs of their day to day lives, slinging coffee at a local coffee shop, while also balancing their crime fighting alter egos. The whole series has a bit of a Panty and Stocking kind of feel with the relatability you find in the Marvel superhero comics. We don’t just see them as heroes we see them as people, even when they’re fighting monsters they’re still just Jalissa and Kim! Though, real talk, I feel Jalissa on a personal level.

But, what I really love about this series is that it features not one, but TWO women of color in prominent roles and not only that, they’re allowed to be human, they have wants and desires and flaws! This series is everything, and if you aren’t already on the Hover Girls bandwagon, you need to be, because this is an amazing series! 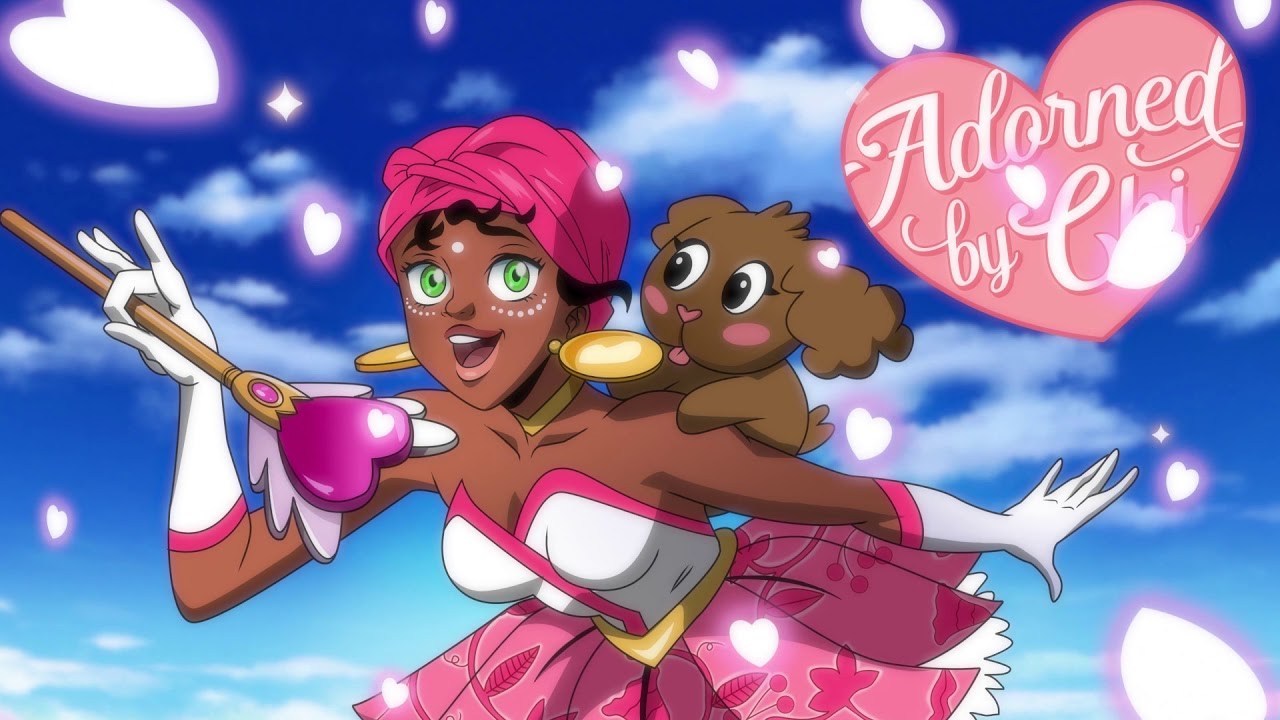 Adorned By Chi by Jacque Aye and Magus Ato

Adorned by Chi tells the tale of Adaeze, a painfully shy Nigerian college student who discovers she has Goddess-like powers and must, reluctantly, lead a team of young warriors to defeat an apocalyptic monster that threatens to destroy humanity.

So, if you love Sailor Moon, you’re gonna love Adorned By Chi! This series is an ode to the Japanese magical girl genre drawing inspiration from series like Revolutionary Girl Utena, Madoka Magica, and Sailor Moon, but with a distinctly African flavor. The series itself features elements of Igbo culture and lore, which is a plus given the lack of African representation in mainstream media!

Adorned By Chi is what happens when fans take matters into their own hands and create the stories they wish to see in the media and the results speak for themselves! This is a delightful series that is changing the game in the magical girl genre and we definitely need more stories like this! But, what really sets my black girl heart aflutter is how diverse the cast is, most people are under the misguided belief that Black folks all look the same. We don’t. We come in all different shapes and sizes, shades and hues and Adorned By Chi celebrates that with it’s wonderful cast! Seriously, y’all need to get on this series!

Love! Love! Fighting is about a young woman who currently has no money, no job and her father won’t return her phone calls. Stressed and in sore need of a good break, Oriana finds herself in a difficult position when her bossy little cousins tricks her back to their home country South Korea.

Come and join Oriana as she learns how to handle her troublesome family members and open up to new friends, who all seem to bring new and unwanted stress to her life.

I discovered this series awhile ago and it changed my life! It is rare to see romance stories that feature women of color, but it’s even more rare to see a series that depicts a relationship between a beautiful full figured woman of color and an Asian man. This story gives me hope that one day, I will be able to meet my Korean love Lee Min Ho… But, what I really love is that the series is that it deals with unrealistic standards of beauty placed on women in a way that is both refreshing and much needed. I really see myself in Oriana, she’s dark skinned and curvy like me, what I love about the series is that she doesn’t let her appearance define who she is… even when the rest of the world tries to.

Love! Love! Fighting! is a series with a lot of heart and honestly, it’s nice to see a plus sized woman of color at the helm of her own rom-com! It’s quirky and cute and a hell of a lot of fun, so if you haven’t picked this bad boy up already, def. give it a read… you won’t be disappointed! 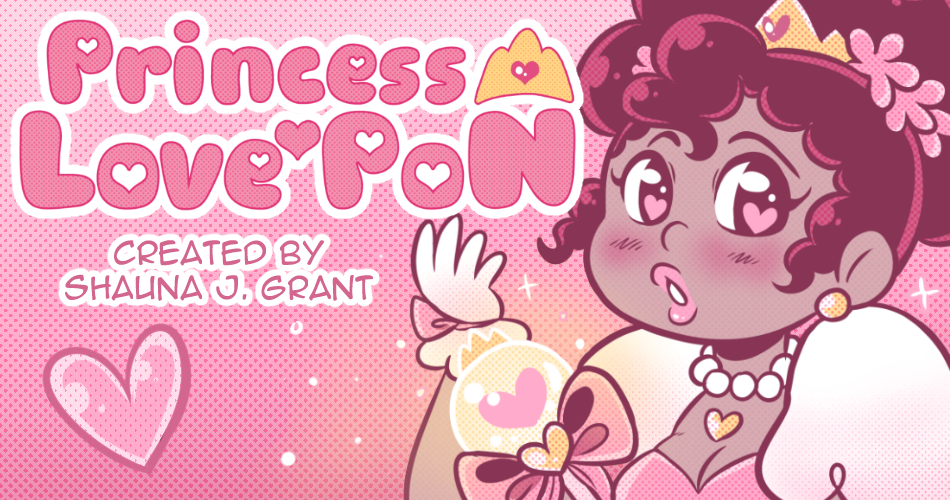 Lia Sagamore is your average high school student worried about the future… Until one day she’s given the chance to become someone magical! Being a magical girl is better than real life… right?

Princess Love ♥ Pon is a story about love! Love for your friends, love for your partners, and love for yourself. But what happens when someone loses track of what’s important? What happens when it’s too hard to communicate what you really need?  Lia, as the magical girl Princess Love ♥ Pon, navigates her way through love, heals the hearts of others who have fallen into despair, and discovers what it really takes to be magical! Is the love she has inside her enough to stop The Dark Queen from devouring the hearts of innocents? Please join Lia on her adventures and find out!

So, I met the author of this series at a con a few years back and she is the sweetest person I have ever met, so of course I had no problem buying the first volume (and an adorable Mystic Messenger print). Shauna’s art is super cute and it goes well with this super cute magical girl adventure! But, don’t let the adorable art style fool you, Princess Love Pon isn’t all sugar and sweetness, it delves into the not so awesome aspects of being a magical girl which adds weight to Lia’s journey.

Princess Love Pon  is another series that draws inspiration from classic Japanese magical girl series like Sailor Moon and Wedding Peach, but with an added dash of Black Girl Magic!

Add a Little Black Girl Magic into your life!

So, whether you’re a Blerd like me or someone that just loves a good story, definitely give one or all of these Black Girl friendly comics a read and also tell the creators how much you appreciate their work! Each of these comics celebrates the women of color, by showing just how absolutely awesome we are!

But, this is just scratching the surface, there are so many other great series out there that didn’t make it into this post, so I challenge you guys to go out and discover even more Black Girl friendly media! Everyone could use a little #BlackGirlMagic in their lives!!

One thought on “Four Webcomics Full of Black Girl Magic!”