Hey, hey all you wonderful Heroes and Travelers out there it’s Monday, and that means another Melanin Monday post!! For those of you just joining us, Melanin Monday is a  bi-weekly post series that I started for Black History Month, where I talk about Black and Brown skinned characters in anime, manga, video games, etc., but you guys loved it so much I decided to continue it!

As a Black woman and self proclaimed nerd it really means a lot to me when I see positive images of my people in media. There are so many hurtful stereotypes and images about Black and brown skinned individuals out there and it breaks my heart, so I decided to throw some positive energy out there by combining my love of my brown skin and my love of all things nerdy… two things that have never been mutually exclusive in my heart. I am and will always be a Black Nerd… or Blerd!  So, for this week’s Melanin Monday post I’m spotlighting six spectacular Black superheroes!! 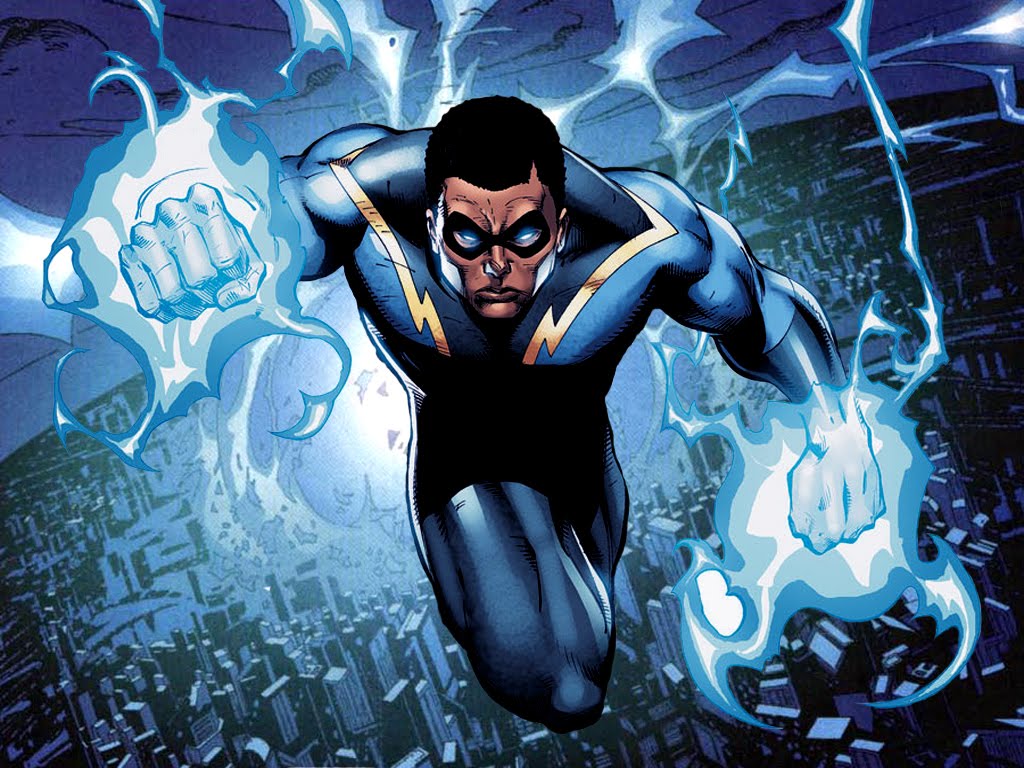 Okay, so I definitely spent a great deal of time deciding whether I wanted to include Static Shock or Black Lightning  on this list… and as you can see I went for the latter… next time Static! For those of you that don’t know, Black Lightning was DC’s first main series Black superhero, so it’s only fitting that he be the first hero on this list! Jefferson Pierce is a gold medal winning Olympian and metahuman with the ability to generate and magnify electro-magnetic energy. Tired of seeing his community ravaged by crime and corruption, Pierce decided to take on the Black Lightning name in order to protect and serve! Oh, and let’s not forget that his daughters also joined him in the superhero business as masked heroes Thunder and Lightning! 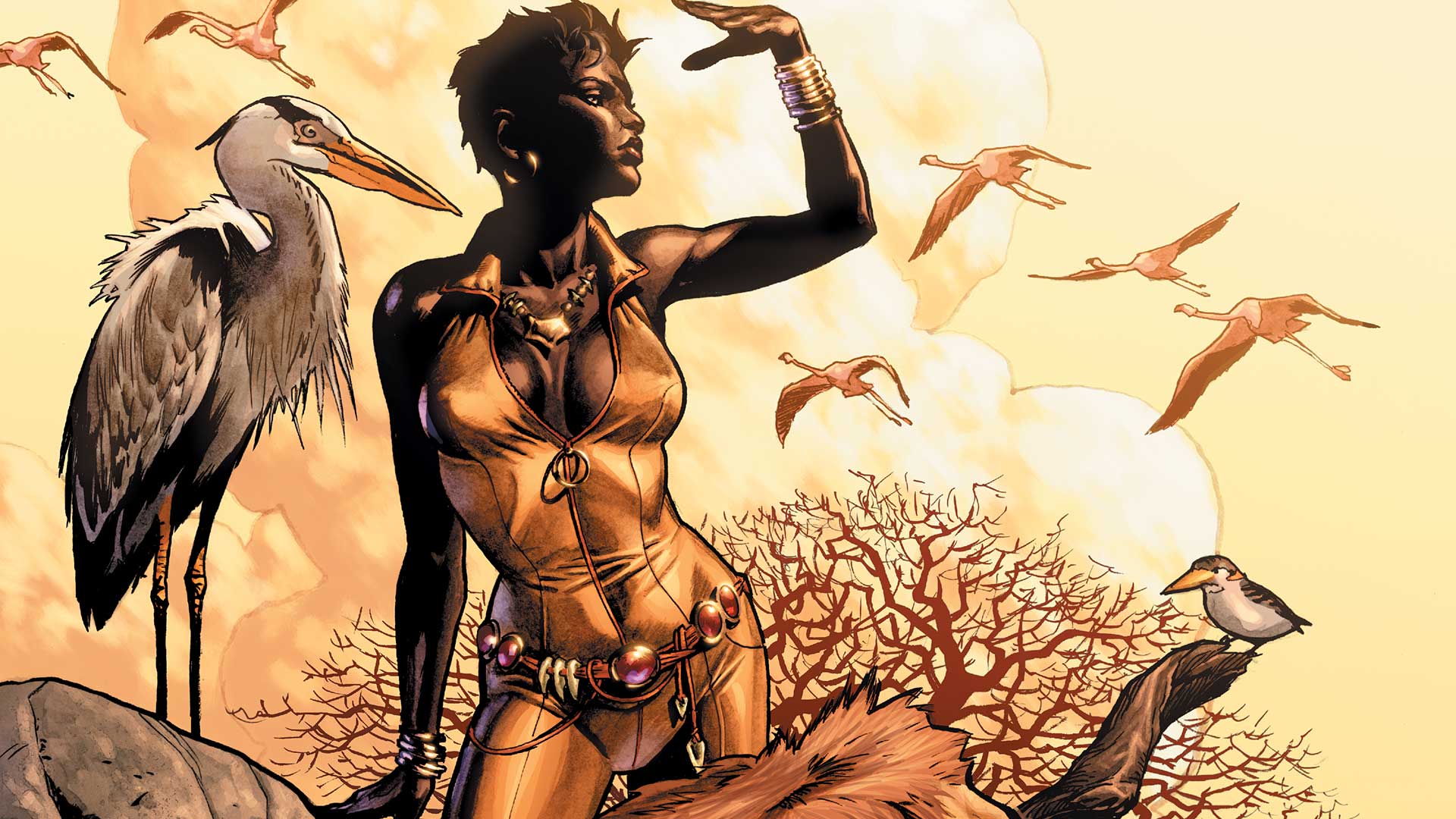 So if you’re like me you’ll remember Vixen from the Justice League Unlimited animated series where she was the unwitting participant in the ill-fated, Green Lantern/Hawkgirl/Vixen love triangle… but, if that’s all you know about this phenomenal female hero you are missing out! Vixen’s powers originated from an ancient Ghanaian warrior named Tantu who asked Anasi the Spider to create a totem that would allow its wearer to take on all the abilities of the animal kingdom. The totem has since been passed down from generation to generation until Mari took possession of it and became the superhero, Vixen! With the totem as a conduit, Vixen can tap into and harness the powers of any creature that has ever lived on the Earth, of course she is not limited to one ability at a time, having been shown to wield multiple abilities concurrently. She also has the ability to communicate with animals and take on their  likenesses!

Superman wasn’t the only extraterrestrial to crash land on our little blue marble, before the man of steel crash landed in Smallville there was another equally important arrival… Arnus aka Icon! When his ship crash lands in the middle of a cotton field in 1839, young Arnus takes on the appearance of the closest sentient being, which just so happened to be a slave woman named Miriam, who took the young Arnus in and raised him as her own. While he is technically a part of DC’s Dakotaverse, Icon alongside his partner, Rocket have fought with and against a number of DC comic regulars. Icon has caused a bit of debate among fans as his crisp upper crust mannerisms have lead folks to call him a sellout, but that kind of thinking severely undermines the importance of diverse heroes of color in mainstream media…especially from one as influential and iconic (no pun intended) as Icon! 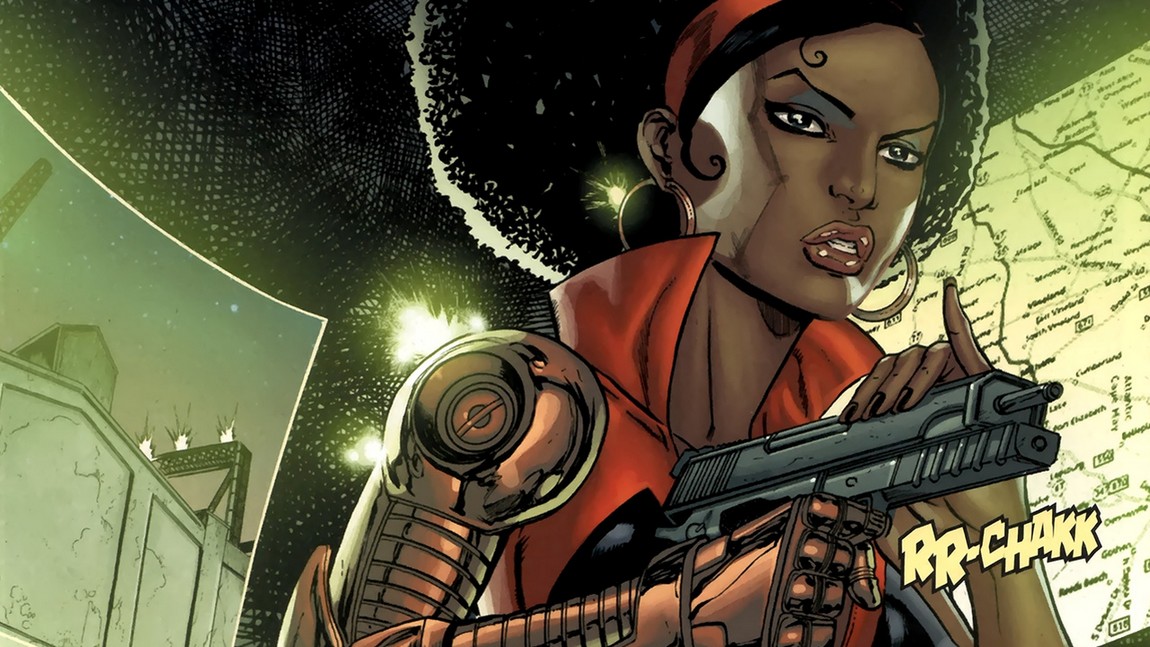 Those of you that watched the Netflix original series Luke Cage should already be familiar with this strong woman! Misty Knight is a former NYPD officer who lost her arm in a bomb explosion only to have it replaced by an enhanced bionic arm courtesy of Tony Stark (aka Iron Man)! With her new arm a thirst for justice, Misty started up her own PI firm working alongside several of Marvel’s A listers, such as Luke Cage, the X-Men, Spider-Man, Iron Fist and many more. While she didn’t possess any superhuman abilities prior to her accident, her vibranium bionic arm does endow her with some degree of enhanced strength, which coupled with her extensive martial arts and police training makes her a more than capable of handling herself in a fight! 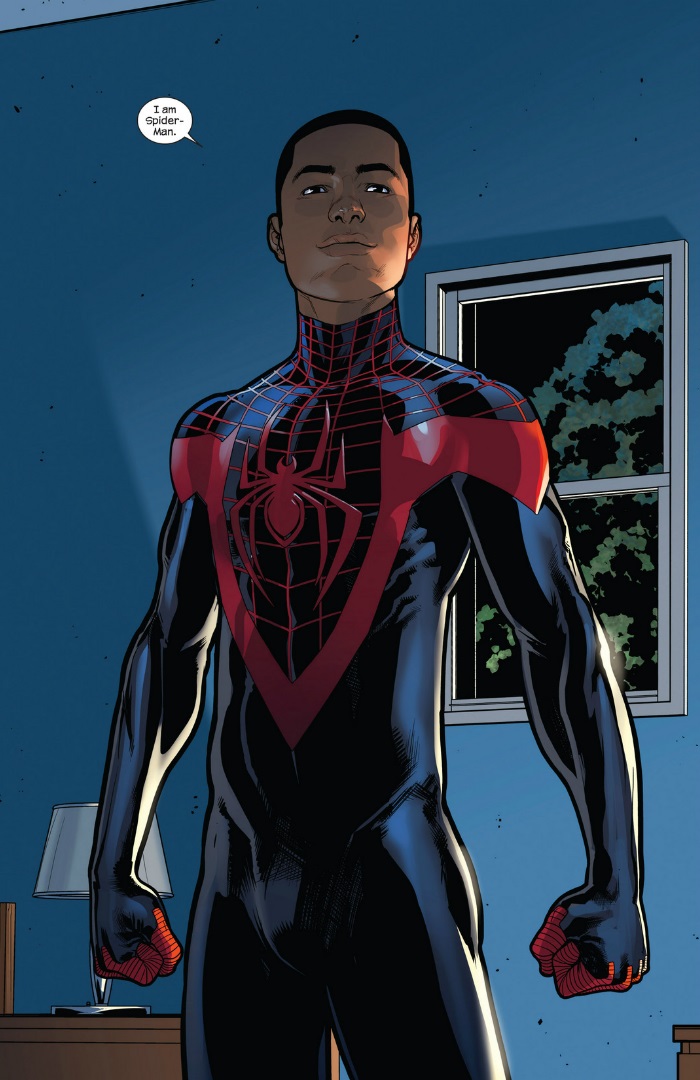 We all know about Peter Parker and his stint as everyone’s favorite webslinger, but let’s not forget Miles Morales from the Marvel Ultimate comics! Miles is a Black/Hispanic teen that took up the Spider-Man mantle after the death of long time hero, Peter Parker. Though he was at first reluctant to take on the title of resident webslinger, he has since accepted his new role despite his young age! While his origin story and powers are similar to that of Peter Parker, Miles does have a few additional powers the original Spidey didn’t have, such as, the ability to camoflauge himself and a venom sting that allows him to paralyze foes. Though he’s still learning to come into his own as a hero, he’s still a badass in his own right… and did I mention I am in love with his suit!!

The Crimson Avenger mantle has been held by three different individuals in the DC comic universe, the most recent being former lawyer turned spirit of vengeance, Jill Carlyle. After she loses a case that sets a guilty man free she decides to take justice into her own hands… with the help of two Colt pistols previously owned by the first Crimson Avenger, Lee Travis. Unknown to Jill, the guns are cursed so that anyone that uses them to exact revenge is also cursed, and must forever hunt down and kill anyone that has taken innocent lives! Not to mention she also possesses the powers of intangibility, phasing, and teleportation. Armed with her twin Colt pistols and an ever bleeding bullet hole on her chest and virtual immortality, this warrior of vengeance is a force to be reckoned with!