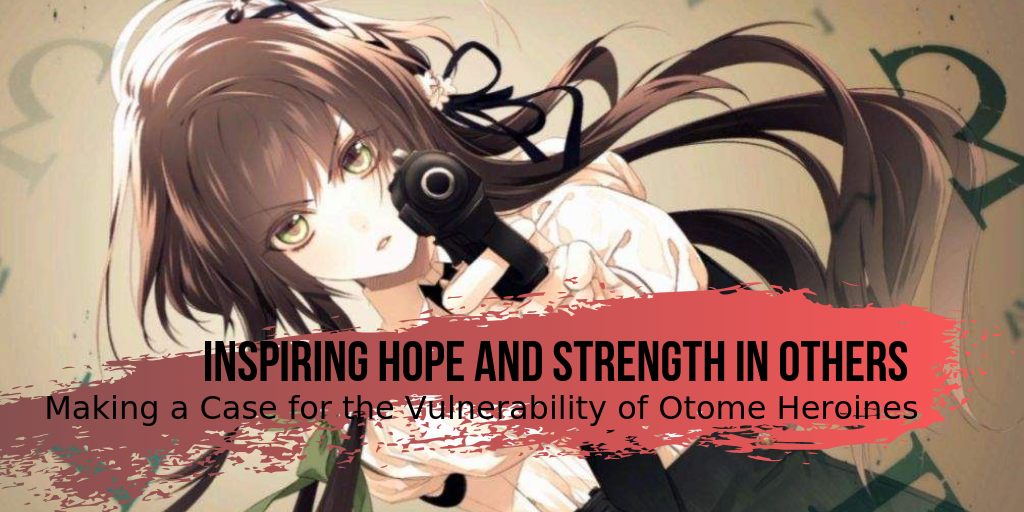 Hey Hey Owlets!! As many of you guys know I’m a member of the blogging group OWLS (Otaku Warriors for Liberty and Self-Respect). We’re a group of bloggers and vloggers that hope to spread a message of acceptance and understanding through thoughtful community activism! We use our love of pop-culture and other media to discuss a wide range of topics.

Last month during our Happiness Blog Tour we looked at the things in our lives that bring us joy, from our hobbies to families and friend, and everything in between. This month we’re redefining our weaknesses in the  June Vulnerable Blog Tour!

I thought long and hard about what I’d write about for this month’s tour. Since this is an otome games blog, I figured I’d go with something related to that rather than the usual anime and manga topics I usually pick. Otome heroines get a pretty bad rap since they are typically seen as self insert characters with little to no agency within the context of their respective games. But, there has been a shift in recent years towards more self sufficient heroine characters, especially in English otome games where protagonists tend to have a more well defined personalities and motivations. Though, generally speaking heroines are still arguably the weakest characters despite having the most important role in otome games. So, I wanted to look at the roles otome heroines play in otome game narratives through the lens of the heroine, Ichika Hoshino in the otome game Collar x Malice.

So, I talked a little about otome heroines in my most recent A Beginners Guide to Otome Games post, but I’m all for giving a brief overview of them again here. Otome Heroines also referred to as the MC (Main Character) are proxy characters through which the player can experience the events of the game. These characters are females from a wide range of ages and backgrounds to suit the needs of the story, though they are typically any where between their teens to mid-late 20’s.

Most commonly, heroines are pretty nondescript with little to no personality or if present, very generic, with only the most basic of details. Can be something as simple as “young college student” or “only child” rarely if ever anything well defined or fully fleshed out, just enough to give players a foundation to work off of while allowing room for the players to superimpose their own personalities or thoughts onto the character. However, as I mentioned earlier there more otome games are starting to include heroine characters that have well defined personality traits and motivations, these “new” heroines have much more agency in their thoughts and actions and can be viewed as independent characters.

There are two main types of otome heroines: Self-Insert Heroines and Non- Self Insert Heroines. Of course this can be broken down into more detailed character types, but the basics are as follows:

The Vulnerability of an Otome Heroine

Since otome heroines are usually throwaway characters much of the focus of otome games is put on the love interests, who always have a well defined personality (usually based on one or more character archetypes), a clear motivation/goal, and a distinctive appearance. In comparison, otome heroines adapt to the setting taking on whatever characteristics are necessary for the game’s premise.

In the Storm Lover series, the heroine, Yuna, is a transfer student at a prestigious high school and that’s about the extent of her entire role in the game. In Nameless – The Thing You Must Recall the heroine Eri is also a high school student, however, that isn’t the extent of who she is as a character. She has a family, friends, a doll collecting hobby, and a conflict that is integral to the progression of the story. Two characters with the same basic foundation, and yet their function within their respective games is vastly different and yet, both work within the context of their narratives. Yuna inspires her love interests to “be better” people inciting a change in them, whereas Eri is the one that is most changed by her interactions with her love interests. In otome games the heroine is the character that incites change either in herself or in those around her how she does this is wholly dependent on the story the game is trying to tell.

But, even within that context otome heroines are often seen as less than when compared with their male love interests. Even in games where the heroine has an active role in the conflict of the story, writers will often include a “handicap” that keeps her from outshining her male love interests. There’s this notion that otome heroines can be strong, smart, capable individuals, but never more so than the male characters. This is perhaps most notable in Collar x Malice, where the heroine Ichika Hoshino is a rookie police officer in Shinjuku. She is noted to be an excellent marksman and pretty intelligent, buuuuut, she little more than a customer service rep in the lowest department in the force. She is unwittingly drawn into a terrorist plot that threatens the entire population of Japan. In the game Ichika investigates various cases connected to the terrorist group in order to put a stop to their grand finale, X-Day. She teams up with a group of former police officers turned private eyes to take down the organization and restore peace to Shinjuku. 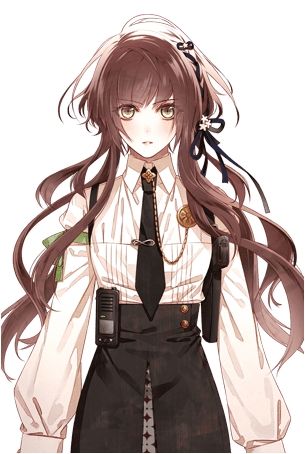 As far as otome heroines go, Ichika is one of the stronger ones, she has a well defined background, motivations, a personality, and plays an integral role in the story. She’s a capable police officer and she’s not completely reliant on a man to save the day. However, her respective love interests are given a boost that gives them a noticeable edge over the heroine. They were the best of the best in their various departments (some even led their departments) so when compared to them Ichika is clearly out classed. She isn’t as strong as them, she isn’t a computer wiz, nor does she have a lot of experience in the field. She makes mistakes. She doesn’t always just pick up on connections between clues. But, that’s what makes her better than her better than them.

Because she allows herself to be vulnerable, she is flexible and open to change. She has her convictions about justice and the police, but when it comes to her shortcomings, Ichika is not afraid to admit when she doesn’t know something. She isn’t afraid to take a step back and let someone more capable take the lead. This is something her love interests don’t have, it’s only through their encounters with Ichika that they are able to admit that maybe they have issues they need to work on too. Ichika is constantly growing and changing as a character to the point that she is almost a completely different person at the end of the game. She’s fundamentally the same, but she’s more experienced and much more accepting of her own flaws (and those of her chosen love interest).

Even more than that, Ichika inspires change in those around her, not because she is the strongest or the smartest, but, because she is adaptable. And that is one of the strongest attributes of an otome heroine, their ability to elicit change. In each route Ichika instigates a change in her chosen love interest, leading them to turn a perceived weakness into a strength. In Kai’s route she teaches him the importance of living for the future and to not dwell on the mistakes of the past. In Sasazuka’s route she shows him that it’s okay to let people in, relying on others isn’t a weakness but a strength. In Enomoto’s route she teaches him the importance of staying true to yourself and to embrace your flaws. And in Shiraishi’s route it’s her empathy and compassion that ultimately breaks down his walls. Ichika doesn’t save the day because she is inherently strong or smart, she does it because she has strong convictions and she embraces the flaws in herself and others.

That’s my take on the Vulnerable Blog Tour! I hope you enjoyed my post, but, I’m just one in a long line of OWLS blog tour stops! Check out YumDeku’s post about Shin Sekai Yori   and don’t forget to stop by Scott’s blog, Mechanical Anime Reviews tomorrow for what promises to be an amazing addition to the OWLS June Blog Tour! Also if you haven’t already, please subscribe to the Official OWLS Twitter account @OWLSbloggers and the Official OWLS Blog, to stay up to date on all OWLS news and announcements!

9 thoughts on “OWLS June “Vulnerable” Blog Tour – Inspiring Hope and Strength in Others: Making a Case for the Vulnerability of Otome Heroines ”