Let the prank wars begin, in Lockvia Studios’s debut title, Prank Masters, follow Juliet Hayes, a self proclaimed prank master, who isn’t above pulling a few practical jokes. But, when her parents move to a new town, Juliet finds that the jokes on her for once when she meets three formidable pranksters that stir up some unexpected feelings. Perhaps there’s more to life than pulling pranks?

Her parents are famous writers and big fans of Shakespeare. Hoping for a daughter filled with beauty and grace, they name her Juliet.

Instead, their daughter grew up to be the opposite. She’s a girl who cares about doing things her own way: the prank master way.

When her parents bring her to a new town in search of inspiration for their careers, Juliet is enrolled in a new school.

A few unexpected situations make her first day of school one to remember. Now, after having not pulled a prank in a while, she is quickly back to her old self.

Though this time it’s not just going to be all about pranks. Juliet might be running into a few unexpected feelings as well….

After playing the demo back in 2014, and I fell in love with the premise and the characters, so, I immediately opened my wallet and pre-ordered the game. But, as the years went by I began to lose hope that I’d ever get to play the game, and then BAM, I get a notification on itch.io that the full game had been released and the rest is history!

Prank Masters is a high school rom-com with a twist, underneath it’s lighthearted premise and bright colors is a surprisingly heartwarming coming of age story. I’m usually not a huge fan of high school romance games, since my high school days are behind me, but there is just something special about Lockvia Studios’ debut title. It doesn’t come with a lot of bells and whistles, nor does it attempt beat you over the head with an overly dramatic plot or characters, rather, Prank Masters manages to retain it’s easy-going narrative throughout. Of course, the game is not without a few forays into “heavy” story elements, but, even those are handled without any of the usual cliche drama or angst, which is rather refreshing. I am so over unnecessary drama, sometimes, I just want to have fun and that’s just what Lockvia Studios delivers!

I loved the protagonist, Juliet Hayes is everything I hope for in my female leads, equal parts headstrong and witty while also still managing to be vulnerable and likable. Far too often writers will overdo it with their strong willed characters, especially female leads, to the point that they feel more like walking talking tropes and less like organic characters. Thankfully, Juliet is written to be multidimensional character, there are times when she is the strong independent protagonist otome games fans have been craving and other times she is just as flawed as the rest of us. She isn’t a protagonist that is so far removed that audiences can’t relate to her, in fact, I’m pretty sure we all either were or have met someone like Juliet at some point in our lives. She acts the way a seventeen year old girl should act, she’s selfish and a bit of a prankster, but each and every one of her actions felt real! In fact, all of the characters are like that, they each act like you’d expect teens to act and the game is better for it. 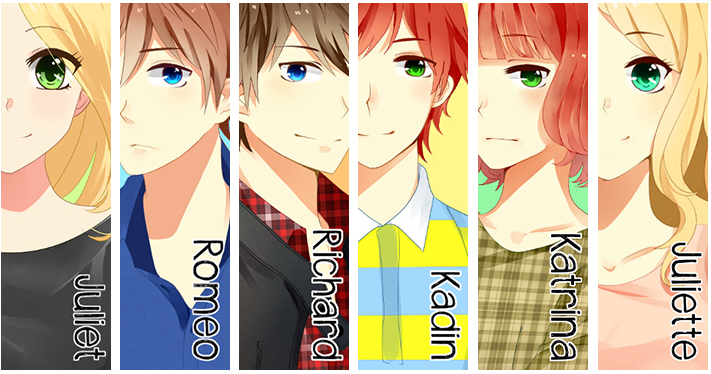 Even the love interests are given the same treatment, none of them fit neatly into any one box, instead they each display a wide range of unique characteristics. Romeo is the boy next door, but, he’s also just as fiery and headstrong as Juliet. Then there’s Kadin, who is the “nice-guy” but, even he has his limits and let’s not forget Richard, who is oddly enough pretty sensitive for a so called easygoing pretty boy. Even the side characters were a lot of fun, though, I will admit that some were a bit out there, like Juliet’s psychic friend Katrina. But, even then I found her quirks endearing, because she was written to be a well rounded character that just happened to have psychic abilities and not just the “psychic girl”.

There were a few things that kind of threw me for a loop, like, the game is written using UK English, which doesn’t really effect the gameplay all that much. But, as an American there were a couple of terms that I had to look up because, we just don’t use them in the states (like, someone please explain what a bubbler is). Also, most of the characters are teenagers, so there are times where I found myself rolling my eyes at certain situations, because as I stated, I’ve been out of high school for quite some time and I just can’t relate to the kiddies and their “problems” like I used to once upon a time. But, I knew what I was getting into from the start, so I could easily overlook most of the “kiddie squabbles” and the pranks, as campy as they were at times, were hilarious… I’m a sucker for a good prank.

I have been waiting for this game for what feels like forever and the final product more than met my expectations, delivering a lighthearted story full of refreshingly quirky characters, Prank Masters is just a lot of fun. You’ll definitely fall in love with Juliet Hayes, the game’s plucky prankster protagonist (say that five times fast) and the rest of the pranksters of the game. Lockvia Studios proves that you don’t need gimmicks or flashy features to make a game good, sometimes you just need the basics: a solid cast and a fun, easy-going premise.

But, don’t just take my word for it! Check out the game over on itch.io or take a gander at the game’s trailer below! If you like what you see, play the game, hit the like button, share, or comment! As always, Thank You for Reading!!

You can also contact Lockvia Studios on Social Media through the following channels: