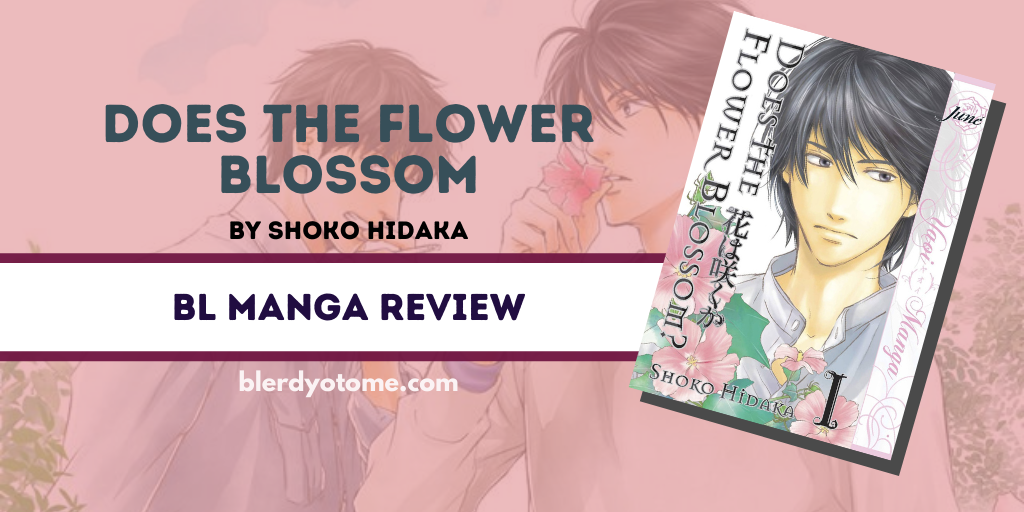 Fangirl Moments are a part of a weekly post series where I cover a wide range of topics (books, movies, anime, manga, etc). These posts are relatively short (roughly 500 words), just a short snapshot about the topic of the week and are uploaded every Friday (give or take)… Previous Fangirl Moment posts can be found under the Fangirl Moments tab on the top menu, organized by type (or just click the tab for the master list).

So now that that’s out of the way… *ahem* I thought long and hard about what I wanted to cover this week and after much deliberation and many sleepless nights I decided to go with… Oh who am I kidding? I don’t really plan these posts out! 😛 This time around, I decided to go with a BL manga that I bought over the Christmas Break, Does the Flower Blossom? (Hana wa Saku ka) by Shoko Hidaka.

Does the Flower Blossom? is a five volume slice of life boys love manga, that follows the budding relationship between a mature office worker and a young artist. This manga series is licensed in English by Juné, please support the author and purchase the volumes when they become available in your area!

If ya’ll will remember I covered one of Hidaka-sensei’s other works, Blue Morning in an earlier Fangirl Moments post… but, I didn’t realize it was the same author until after I finished Does the Flower Blossom? How that happened, I’ll never know but I’m glad that I did, I absolutely loved this series from the very first chapter all the way to the last!

Sakurai Kazuaki. At age 38, he’s single, overworked, and starting to feel a bit miserable about his life. One day a young college guy at a train station bumps into Sakurai and wrecks his magazine. Fate — or coincidence — has it, Minagawa happens to own the same magazine at home, and instead of apologizing for the damaged item, he invites Sakurai to his house and replaces it with his copy. “What an arrogant young kid he is!” Sakurai dislikes him immediately. Yet, despite feeling annoyed and frustrated by Minagawa’s rude and arrogant behavior, Sakurai soon finds himself a frequent visitor of the secluded household…

Youichi is a distant young artist running an out of the way boarding house that was left to him by his deceased father. While, Sakurai is a lonely advertising executive, who spends most of his days and nights toiling away in the office. Two men that never should have met strike up an unusual friendship born from their shared loneliness. Sakurai finds himself captivated by Youichi’s cold indifference, and Youichi can’t help but look forward to the more “adult” Sakurai’s frequent visits to the boarding house.

I’ve said this before, but I prefer slow romantic development over the sex equals love stories that are common in BL/Yaoi manga. Of course Sakurai and Youichi eventually start up a sexual relationship, but that doesn’t happen until the end of the series. The bulk of the story focuses on the budding relationship between the two men. We get to see them move past their initial hatred of one another as they gradually fall in love. Of course not everything is smooth sailing, their relationship is riddled with obstacles from the start. Youichi is awkward and has a hard time expressing himself, while Sakurai is hesitant to start a relationship with another man, especially one as young as Youichi. But, together they learn to let go of their pasts and find comfort in each other…

I breezed through the first two volumes in about an hour, but the prospect of waiting for my pre-ordered copy of volume 3 was too great and I had to resort to other means… I know, I know, I was weak and I will bare the weight of my shame forever (I am still going to buy all the volumes when they are released), but, it was worth it! This is one of the best BL manga series I have read in a long time and I am more than happy to show my support for such a fantastic work! I just can’t believe it took me so long to find it! I highly recommend this series, Does the Flower Blossom? is beautiful story about love and new beginnings. This is a slow realistic story that will have you captivated from start to finish, so if you consider yourself a BL fan… go read this manga NOW!

25 thoughts on “Fangirl Moment: Does the Flower Blossom?”